The Witcher: Nightmare Of The Wolf Review – Tales Of A Young Vesemir 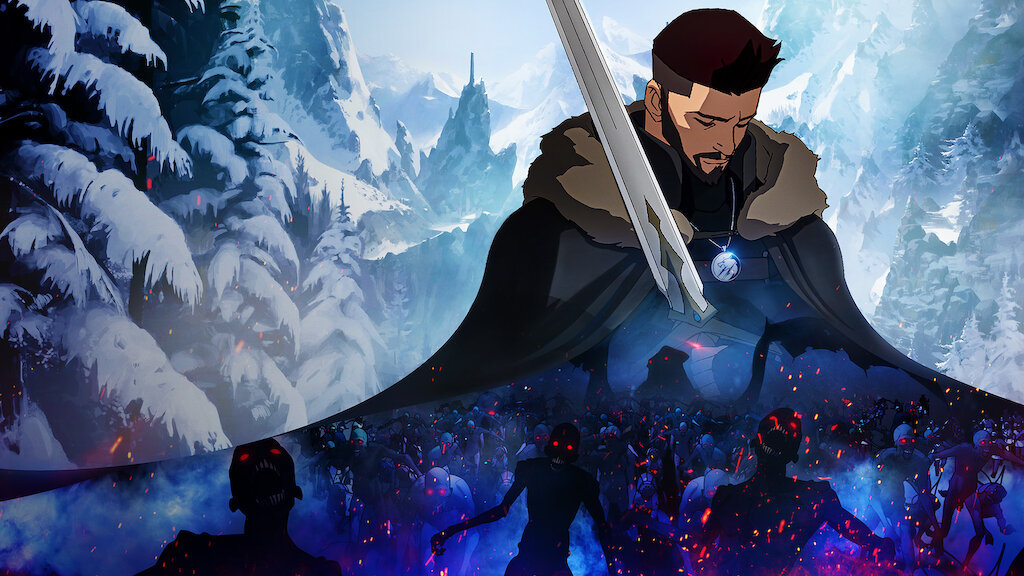 The Witcher: Nightmare of The Wolf is everything that makes a good Witcher story. This says a lot, not only because of its current 100% fresh rating on rotten tomatoes, but also because when Netflix first agreed to adapt a Witcher series, I don’t think most of us knew just how triumphant of a hit it was going to be. Reception to both the movie and television series — known as The Hexer — was incredibly negative. Despite a 20 year history, it wasn’t until recent times — in a post-Game of Thrones and post-Lord of the Rings world, mind you — where people really gave The Witcher books some attention. Especially thanks to the video games from CD Projekt Red and with The Witcher 3: Wild Hunt in particular.

The Witcher is more than the tale of Geralt of Rivia. It’s a magical fantasy fiction whose twists on popular fairytales and social commentary about classism, are in fact, political takes about a lot of the neo-liberal anti-politics of the Polish 1990s. How oftentimes, as often is in politics, there is no moral high ground. There is no purely good or evil in the choices we make, but rather, a difference in perspective and execution. The decisions made and then the subsequent consequences of those actions. Which Nightmare of the Wolf captures so beautifully, in the spirit of The Witcher series.

From studio MIR, the same studio that made Legend of Korra and DOTA: Dragons Blood, comes The Witcher: Nightmare Of The Wolf. The first among many spin-offs, produced by Lauren Schmidt Hissrich that is set in the Witcher universe on Netflix. And let’s be clear: it’s really good.

Nightmare of the Wolf follows the story of a young Vesemir. The eventual mentor to Geralt of Rivia and the former fencing teacher for the School of The Wolf. In layman’s terms: he’s daddy Witcher, in that throughout the books and games in the series, Vesemir is basically everyone’s father figure. The story highlights everything there is to know about Vesemir’s origins. How’d he come to be a Witcher at the school of Kaer Morhen, his first love Illyana, and why it is his swashbuckling past experiences as a highly acclaimed Witcher had drawn him to seek coin in the first place.

Most importantly, the story gives some much-needed history as to The Witchers’ eventual downfall. Something mentioned yet never really explored until now, during Geralt of Rivia’s time. What’s remarkable about the series is in how it, like much of the lore, highlights some of the prejudices of humankind against inhumans — demarking one of the series’ biggest unseen tragedies yet to be depicted in a visual medium. It begins as a mystery about a talking Leshen — powerful demonic woodland spirits — and then looks into the investigation into a series of mysterious elven kidnappings, from a reluctant request from the nearby kingdom, and even Fillavandrel, the Elven king himself.

What results is a tale about the rough and inhumane training about being a witcher. In particular, the trail of the grasses and near-immortality at what costs. Vesemir has been depicted as one of the greats for a long time, and its exploration into his origins feels an awful lot like Obi-Wan Kenobi’s origins in those Star Wars prequel movies. It’s also, as often is the case when it comes to fate in this series, a tale of ‘be careful what you wish for.’ So expect some pretty tragic yet heartwarming surprises along the way.

Some of The Best In Voice Acting 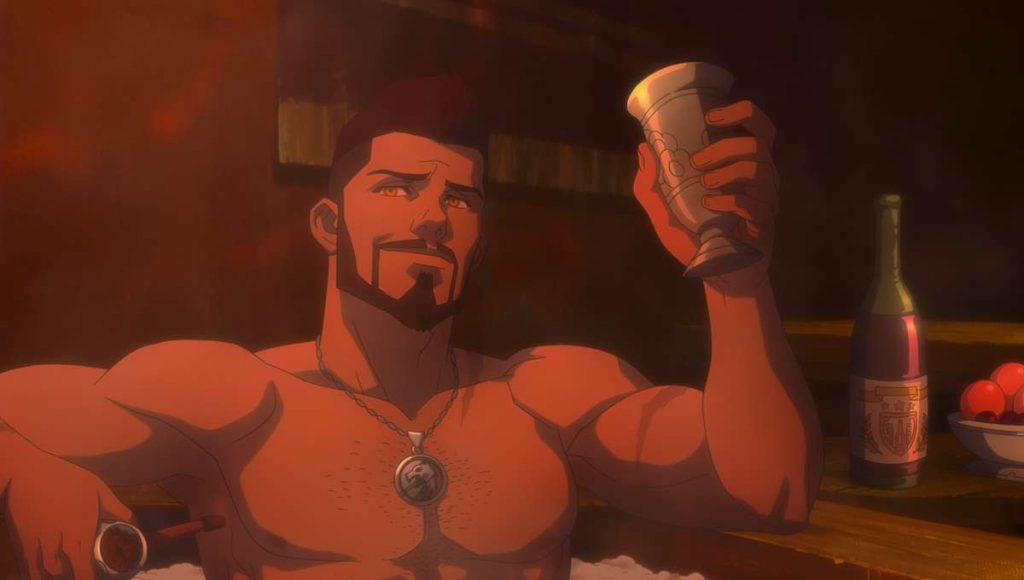 Just like in DOTA:  Dragon’s Blood, the cast brought on for Nightmare Of The Wolf, is absolutely fantastic. I can’t stress how in love I am becoming with Studio Mir, as this series delivers some epic sword fighting and combat animations ever depicted to date. Likewise, The all-star voice cast has really captured emotionality to tone.

Theo James (Castlevania) is in the leading role as Vesemir and portrays the role with a gravitas and charm normally reserved for Geralt of Rivia. He plays the character with lots of charm, swoon, and glorious bath time butt shots — letting audiences sort of realize that at one point in time: old man Vesemir was a reckless recluse. Illyana, played by longtime voice actress Jennifer Hale (Mass Effect, Knights Of The Old Republic), plays one-time childhood best friend and former love to Vesemir in their early formative noble serf years. Mary McDonnell (Battlestar Galactica), as Lady Zerbst, portrays a seasoned noblewoman and old friend. A heartwarming reminder of a life Vesemir had given up for a journey along the rough yet glorious PATH of the Witcher. Finally, Lara Pulver (DOTA: Dragon’s Blood) plays Tetra, a reluctant sorceress partnered with Vesemir, whose rough history with the Witchers makes her rather distrustful towards him. We also get a cameo from the Netflix series with Tom Canton, who is reprising his role as Filavandrel, the reluctant king of the elves in this animated prequel. 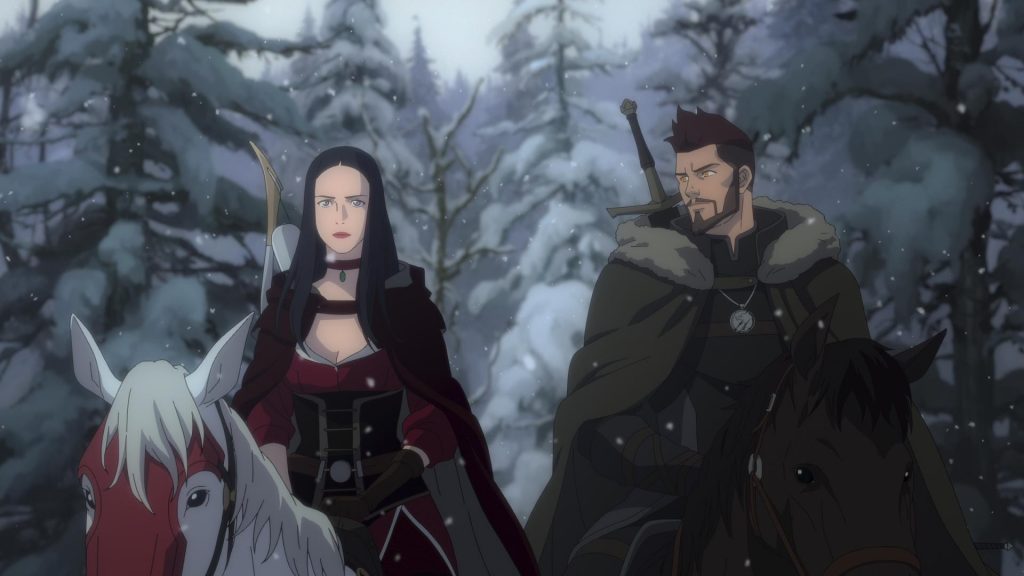 I can’t stress enough, as both a fan of the books and games, this is a great animated movie. For those unfamiliar with a lot of the Witcher Lore, who’ve only watched the Netflix series, I think this is an even more fantastic movie. The animation by this studio has proven its worth time and time again, with this movie being no exception. But really, its the writing that I was taken aback by, as I wasn’t entirely sold on the premise of a Vesemir movie, and to be quite frank: thought a backstory film for more of Geralt, Yennefer, or some of the sorceresses would’ve made a lot more sense. But I was wrong.

Atop of this, the music is perfect for the story in that it’s very reminiscent of the show. Atop of this, you can really feel the losses all around, and the overall emotional tone is on point. I also really liked watching the combat and Vesemir, who is a surprisingly good swordsman, in action. I also liked the potion throwbacks.

Unless You Hate Animation: You Should Watch This

I can’t stress enough that there was nothing about this movie I can that was negative. I can’t say it’s a perfect film as there wasn’t a groundbreaking WOW moment that would make me remember this movie for a lifetime, but I think it’s quite close. 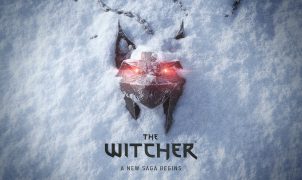 War Is Sweet For Those Who Have Not Tried It. You are unlikely to play anything more curious this year than Nongünz. This rogue-like shooter breaks from the norm,…