The Most Consistently Funny Episode Yet 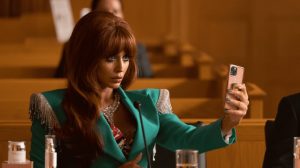 Sorry for the delayed She-Hulk coverage, True Believers. I’ve been on vacation the last couple of weeks, but I’m back and ready to dive right back into She-Hulk: Attorney At Law which is really starting to hit its stride in its fifth episode, “Mean, Green, and Straight Poured into These Jeans.”

At the end of last week’s episode we found out Jen is being sued by Titania, last seen back at the start of the series when Jen got into a fight with her in court. No, she’s not suing for injury, but rather over the name She-Hulk. It seems that she leapt at the chance to steal the name through a copyright claim and is now marketing a full line of bogus products under the name.

Back at the start of the series, Jen might have been happy to see the name gone, but now she’s started to accept that it’s a part of her, and her job kind of relies on it. Which means she’s going to have to fight for it in court. Doing so, though, means proving that she actually embraced the name and used it publicly prior to the copyright, not so easy when she’s given multiple public statements about hating it and refusing to accept it.

Meanwhile, Nikki and Pug go on an adventure to get Jennifer a better wardrobe, as everyone agrees she needs to dress better instead of wearing the same boring business suit every day. It’s hard to find clothes that make sense for a Hulk, but superhero designer Luke Jacobson seems up to the task. It takes some convincing, but the idea of creating clothes that will work for both Jennifer Walters and She-Hulk, in multiple areas of her life, seem to intrigue him. By the time he’s done, he’s even created her something a little extra, which makes me hope that by the time the series is done, we’re going to get to see Jen suit up. There’s also a hint at another much-anticipated character we should be seeing soon here, though fans will still have to be a little patient on that one.

Some of the series’ best actual courtroom action happens this week as Titania and Jen go head to head without using their fists. Jameela Jamil is hilarious as Titania, and I’m really enjoying her take on the character. Renée Elise Goldsberry, who Hamilton fans will be very familiar with, is also finally given a chance to shine and is a fantastic addition to the episode as Jen’s colleague and potential friend who represents her in her case while taking no crap from anyone. Jen can’t figure out where they stand, and I’m equally unsure, but it’s a great dynamic and one I look forward to seeing explored more.

In the end, proving Jen has embraced being She-Hulk is hard, but there’s one area of her life where it’s definitely possible. We’re only a week removed from her dating profile, where she went on multiple dates as her superhero persona, and getting the various guys she went out with on the stand provides an opportunity to show how she had been embracing it. While a winning legal strategy, it does mean parading a bunch of losers who, despite that, still think they’re somehow able to do better than a literal superhero around in court and airing all of her dirty laundry. It even means displaying a somewhat embarrassing dating profile for all to see. Still, Jen and Mallory bond over the experience, and both resolve to do better.

While perhaps not a true standout episode, Mean, Green, and Straight Poured Into These Jeans is one of the funniest episodes of She-Hulk: Attorney At Law yet and finds it settling into a comfortable rhythm that any sitcom will eventually need to find. Each week I find myself even more excited to seeing what comes next for Jen and her team. If that keeps up, this will soon become one of my favorite of the Marvel Disney+ shows.