No Dragons Were Harmed in the Defense of These Ancients 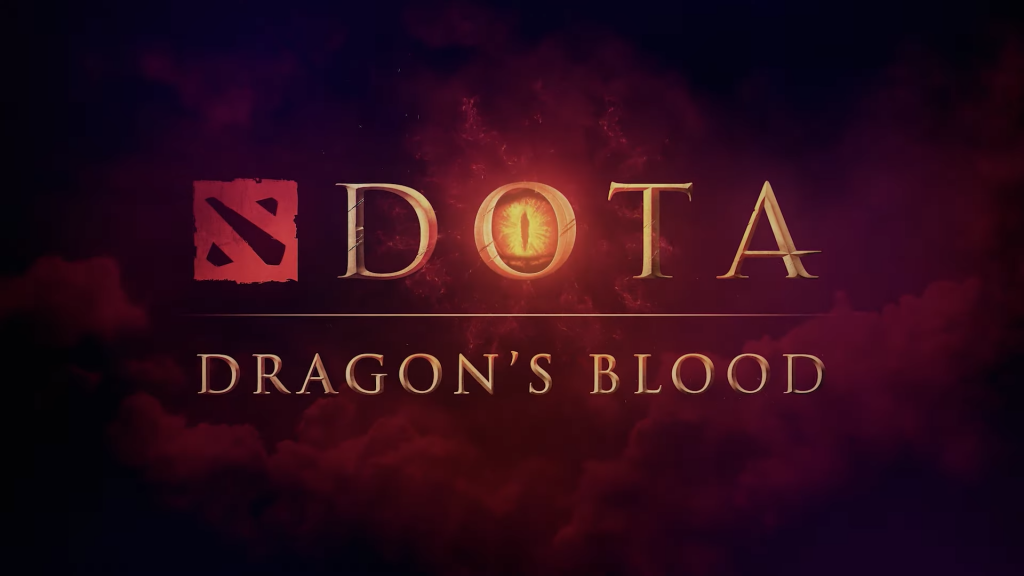 I’ve followed DOTA since the very beginning, during the original Icefrog and Guinsoo years. Back when DOTA was a custom map — just like Counter-Strike for the Half-life franchise — on Blizzard’s multiplayer Battle.net for their critically acclaimed Warcraft 3. Defense of the Ancients was the progenitor of the MOBA (multiplayer online battle arena) genre. Before League of Legends turned it into a billion-dollar Esports empire that changed gaming. Yet for all its acclaim DOTA, like most MOBAS, lacked a coherent story. Everything about its skins and style was somewhat adapted from the Warcraft 3 original skins. As a result, for years it lacked an original mythos between the comics and in-game lore. This is why, after a decade’s worth of gaming, it was really refreshing to see these roots established in the Netflix animated fantasy DOTA: Dragon’s Blood.

If you like an epic fantasy about knights, dragons, elves, and sorcerers, then this series really delivers. Its high quality animation was produced by Studio Mir, the production company responsible for Legend of Korra. Though don’t be fooled, this series is definitely meant for adults. Its incredibly bloody violence is in line with the Netflix adaption of Castlevania, though unlike the acclaimed vampire castle romp, this series is not as sexualized (but it does touch on elven pods of polyamory). For fans of the game, there are also many DOTA callbacks, such as the shop keepers, magic and the elven moon magic — all for a show that can take fans right into the lore. 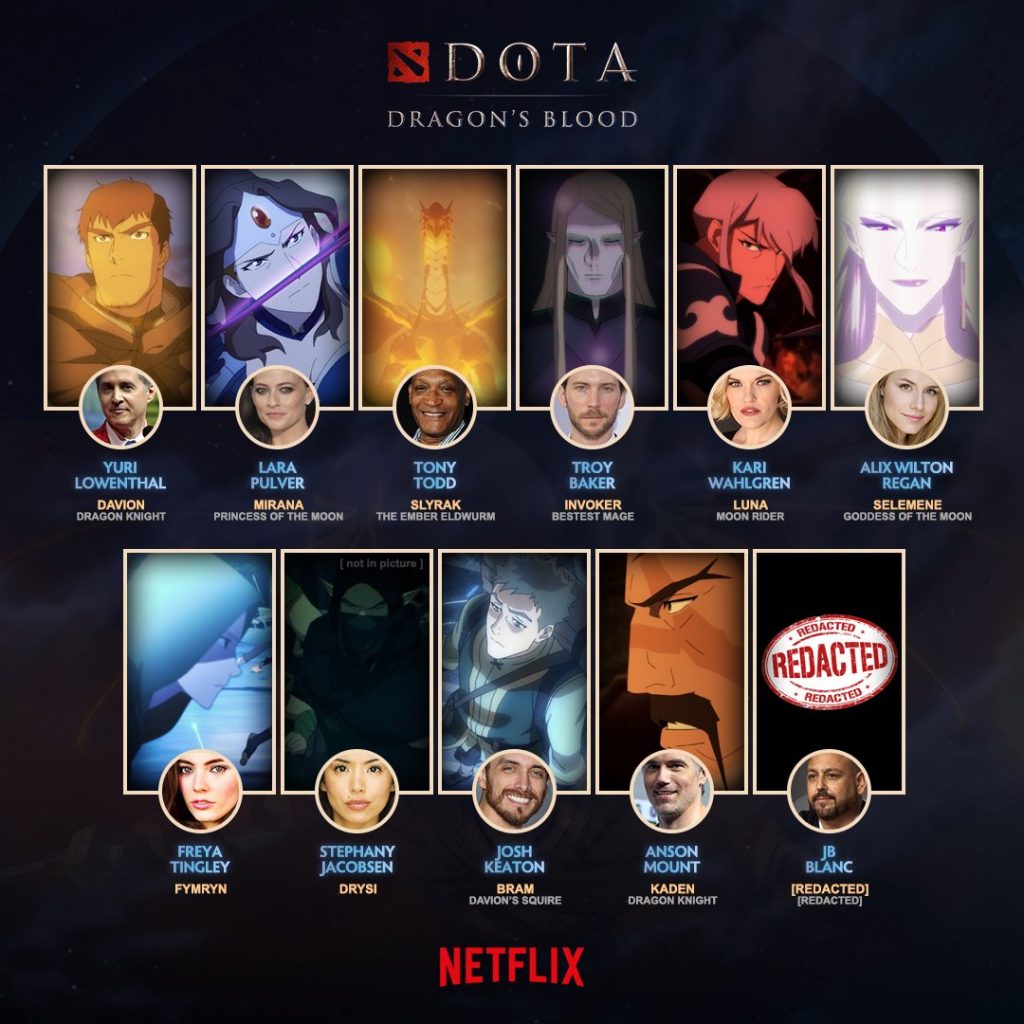 The show also features a star-studded voice cast with the talents of Yuri Lowenthal (Marvel’s Spider-Man), Lara Pulver (BBC’s Sherlock), and Troy Baker (The Last Of Us), all of whom do an excellent job in their performances, with a natural cadence for fantasy dialogue with a touch of wit. What’s great about these stories is that they don’t pivot away from the tragedies of war. All the heroes who band together have lost something: a family, a lover, or a kingdom. Heroes who’ve seen both the destruction and preservation of the world, in a tale all seemingly tied together with dragons. We break it down below.

You Slay Monsters, Not People 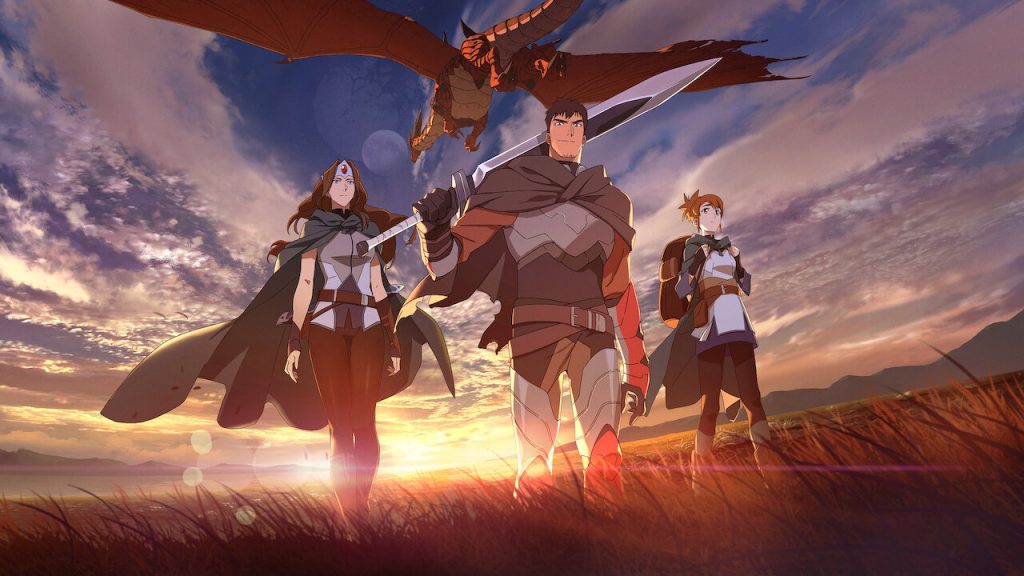 DOTA: Dragon’s Blood follows the story of the Dragon Knight, Davion. A stereotypical hero and dragon slayer with a tragic history. When Davion has a chance encounter with a fabled eldwurm known as Slyrak, one of the most ancient and powerful dragons in the Thunder, his life goes down an entirely separate path. One where the Dragonslayer and Slyrak must learn to coexist together to challenge the demonic Terrorblade. who serves as the main antagonist.

Terrorblade’s goal is to is feast on the souls of seven eldwurms in an attempt to acquire even more God-like powers. Thankfully, Davion doesn’t have to face these challenges alone. Along the way the young knight finds many friends and a few familiar champions featured in DOTA. Most important being Mirana, the Princess of the moon. 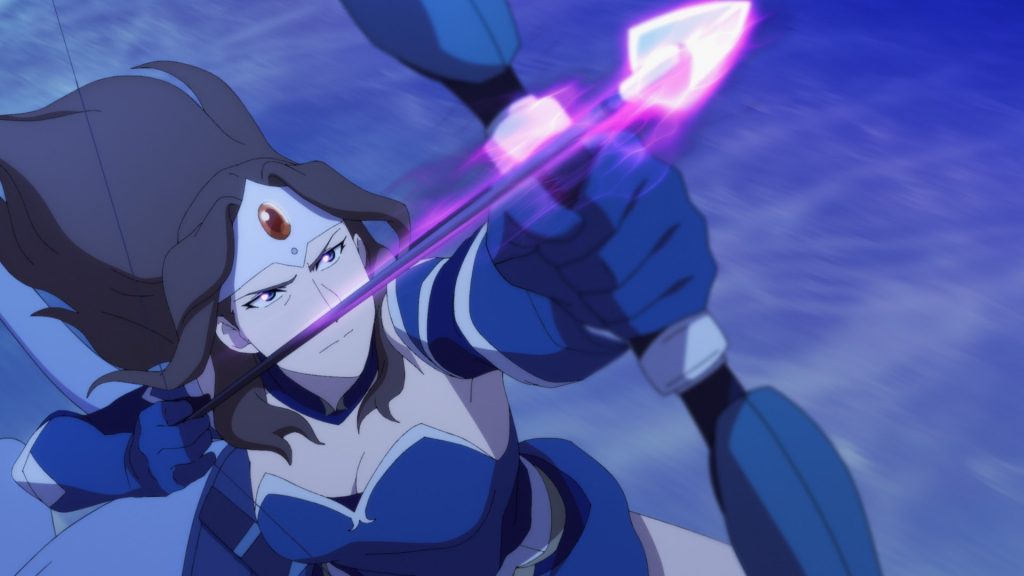 The show’s other main story is that of Mirana, the princess of the moon. A leader of the elven Nightsilver woods, Mirana had left home to reclaim the stolen lotuses of Mene, the flowers of power meant for her goddess, Selemene. Mirana is cunning and smart. Her skill with a bow is unprecedented and she is capable as a fighter and able to hold her own against dragons, atop of being a naturally charismatic leader. She travels with a mute companion named Marci, who in her own respect is a pretty badass fighter despite appearing like a petite and helpless young mute.

While the elves of Nightsilver woods are known as healers of the broken, they are also fearsome soldiers who are at odds against the forest elves of Coedwig. Which are elves that still worship the original Mene and refuse to bow down to and worship the new mood goddess, Selemene. What all of this means unravels throughout the run of the season.

We’ve All Lost Something Already 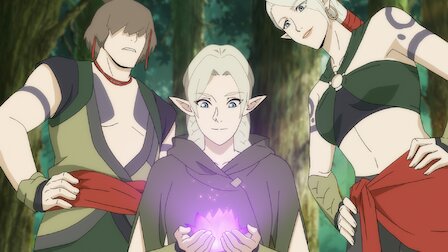 The third storyline in the season is that of a magically gifted Fymryn, a thief with mysterious shadowy powers that allow for teleportation and cloning. An elf of Coedwig (the opposing elf faction of Mirana’s), Fymryn is the thief who kicked off the series by stealing the lotuses of Mene. All to fulfill a prophecy that would hopefully restore the balance of power to her people.

Now, the first thing that’s noticeably different between the elves is that the elves of Coedwig are more Forest-based, while Selene’s clan utilizes the light of the moon. Fymryn is also in a pod with three friends, in what appears to be an open depiction of a polyamorous relationship.

Early on in the story, Fymryn is hunted by Luna, a fellow DOTA hero and captain of the armies of Selemene. Much of the conflict amongst the elves involves the Nightsilver wood elves and their campaign to force Coedwig to worship Selemene, thus granting the goddess her abilities.

It’s a complicated plot that involves another DOTA hero, the Invoker, a sorcerer and ex-lover to Selemene. The Invoker lives in a mysterious hidden tower and much like Dracula in Castlevania, is sort of a misunderstood possible villain and/or hero, depending on whose side you take in the story. The Invoker also serves as a sage to all three parties, granting answers to Davion, Mirana, and Fymryn. Though we’re not sure why, he also seems to have a great affinity for Fymryn which may be connected to his daughter, the lost child of his and Selemene.

DOTA fans rejoice because we finally have some solid source material to work with. Thus far, in DOTA: Dragon’s Blood, we’ve met Davion The Dragon Knight, Princess Mirana, Luna the Moon Rider, the Invoker, and Terrorblade. Though personally, I also think Fymryn might later be revealed to be Spectre, given her shadow abilities and weapons of choice.

As a show, DOTA: Dragon’s Blood is a surprisingly well-written fantasy that finally makes DOTA a semi-coherent story. There’s a lot to take in at first: a war between the elves, magical dragons, and even a battle amongst Gods and Demons. But upon a second, or even a third watch, I really grew to appreciate the writing in this series, as there are lots of foundations for each character that are all incredibly well tied together to the lore. I just wish they’d finally explained what the hell the Ancients are and why is it that I’ve spent almost 18 years of my life defending them.

Koei Tecmo Continues Their Legacy Of Disappointing PC Ports Ports like this are always a difficult thing to review. On the one hand, Nights of Azure is a lovely,…