The Board Game Video Game Based On The Thrones Game 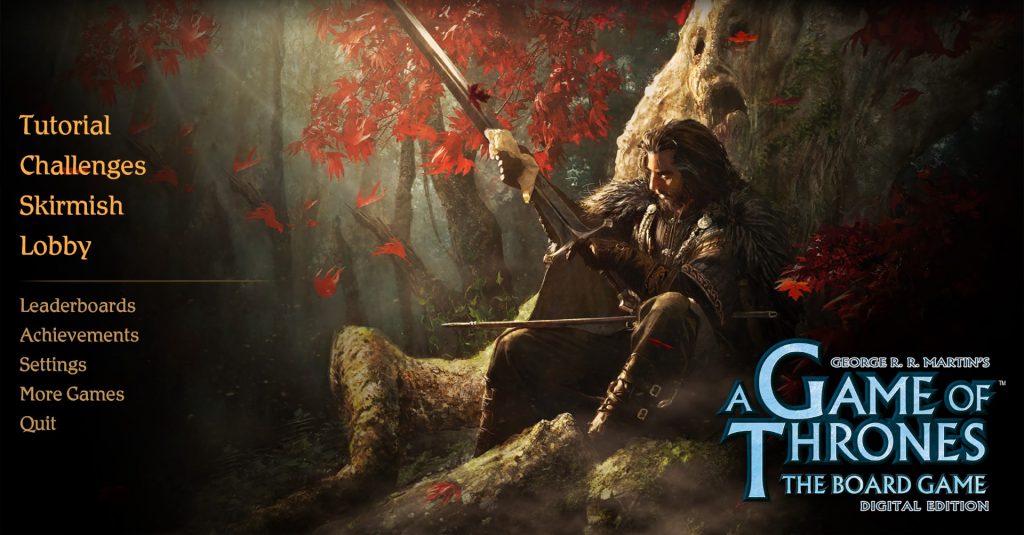 It’s strange, but A Game of Thrones: The Board Game Digital Edition is probably the best video game adaptation of the series I’ve ever played. Between all mobile freemiums, Telltale Adventures and lackluster PC games, most adaptations of Game of Thrones just couldn’t grasp the magnitude of its universe. Which is surprisingly where the board game digital edition excels. With a focus on worldbuilding, heroic character card abilities and gameplay based on the histories written in the books, the Game of Thrones Board Game was already one of the greatest Thrones adaptations. But with the new digital edition and its brand new features, it’s even arguably one the best Game of Thrones video games ever made. While there isn’t an originally minted story here, outside of moments from the source material, that might actually be a good thing, given to the fates of all those who’ve tried and failed (Looking at You D&D and Season 8).

Developed by Dire Wolf and published by Asmodee Editions, Game of Thrones released on October 6th at a price of $19.99. A price point that is actually much cheaper than the original board game. The digital edition also features online capabilities and even a brand new challenge mode campaign that reenacts some of the best moments from the War Of The Five Kings. So basically, Game of Throne Seasons 1-3. The digital edition also features 4 different playable modes of gameplay. We break it all down below. 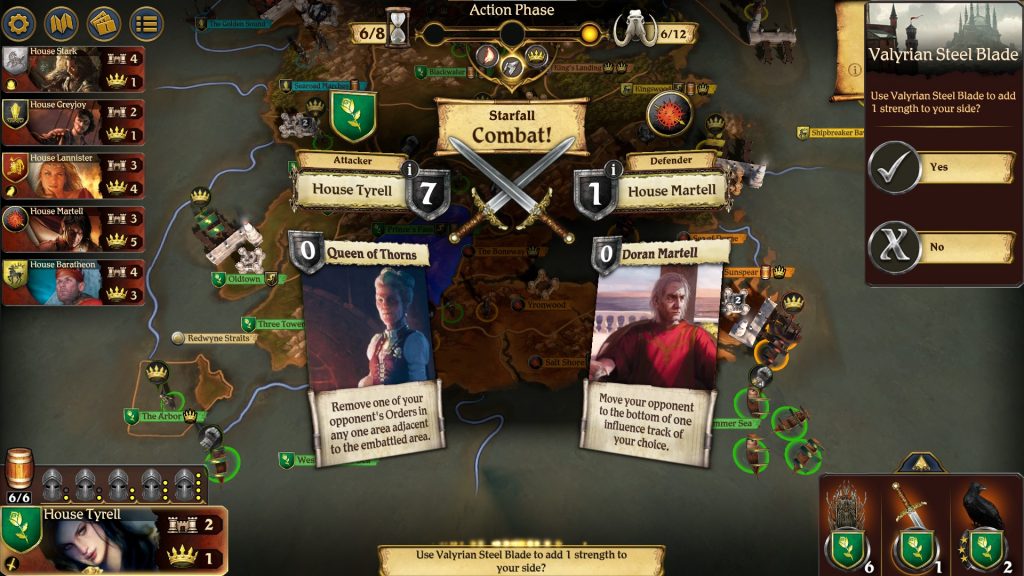 Now, The Game of Thrones Board Game is a turn-based strategy game that mixes unit placement strategy, diplomacy, and character card battles. Set during the War of The Five Kings, the game sees you play as one of six houses vying for the Iron Throne.

What’s unique about this system’s gameplay is that orders and commands are kept secret from each other until the reveal phase. They are then executed in rounds of turns often to great surprise. The game encourages allying, cheating and betraying each other, just like in Game of Thrones. The game does an excellent job staying true to the books in both topographical layout and design. House Baratheon starts out as King and is stationed beside Dragonstone and King’s Landing. The Starks can consolidate power as they rally their armies in the North. The Greyjoys on the Iron Isles raid the shores and control the sea. While the game itself is actually rather complicated to keep track of at first, this edition has made one huge quality of life improvement – the tutorials.

This Tutorial is Fantastic 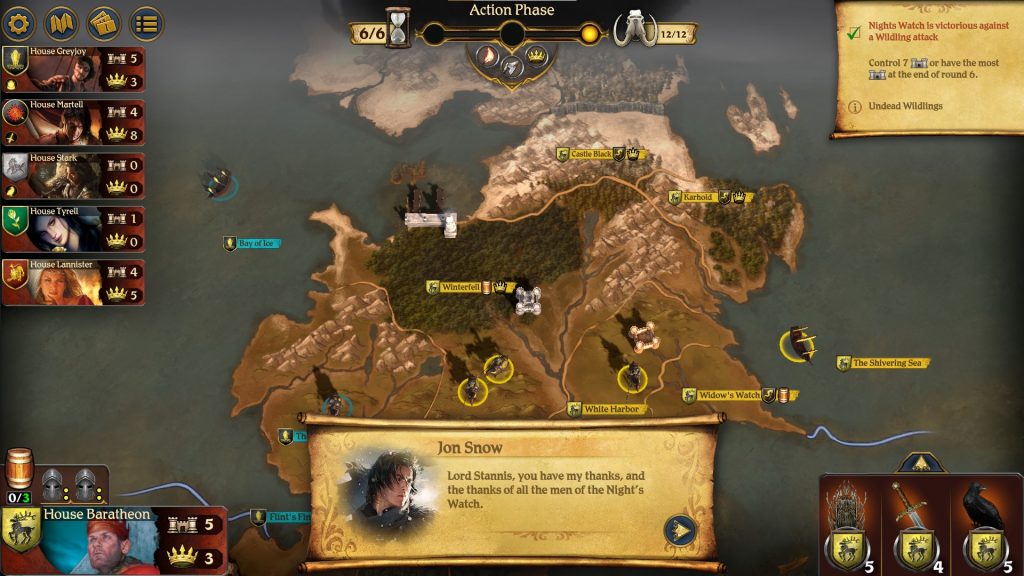 Now, one of the things I dislike about board gaming is having to re-learn a game’s many rules over-and-over again. Especially if it’s been a long while since you’ve played. Worse is having to explain and look up rules for the umpteenth time during the middle of a game. Which is why the digital version is nice as everything is neatly executed. More than anything else, the tutorial mode in this edition is nothing shy of fantastic.

Tutorial mode goes over how orders, attacks, and strategies work, and more importantly even lets you sandbox the map in actual gameplay. The tutorial serves as an essential guide, as knowing where each resource and fortification is, along with how they all work together, is sort of the whole point of this strategy game. Having played this game for what’s probably close to 100 hours with friends in my lifetime (I own the actual board game), I was thoroughly surprised how they explained everything in a straightforward manner in several simple to play tutorial modes. All while using even more characters from books! 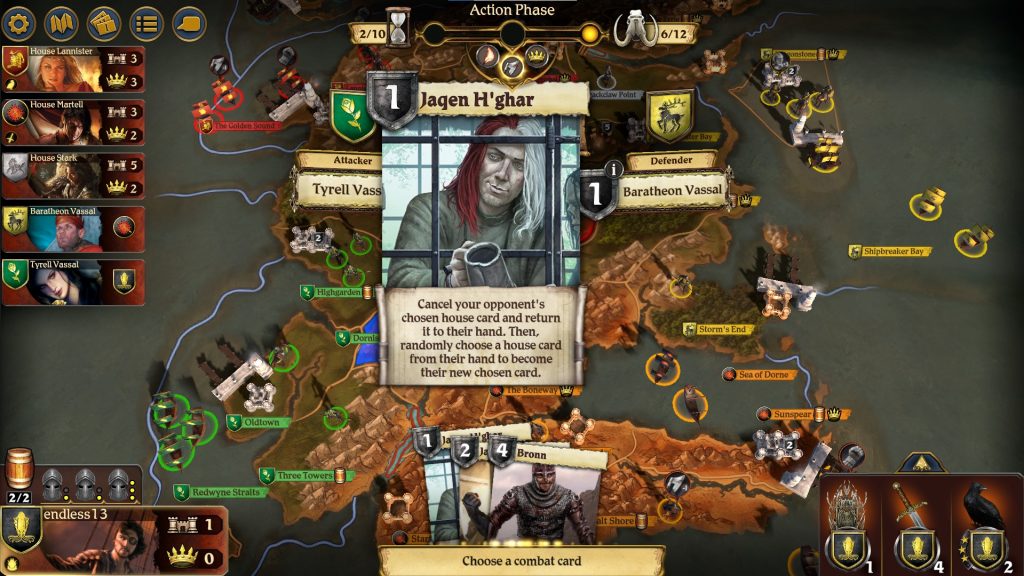 In skirmish mode, you can play solo against an adjustable AI level of difficulty. You can also try your hand at the recently added Vassal System, from the Mother of Dragons expansion to the original game. The Vassal System works like the regular game except players can now take turns controlling other Vassal houses, depending on where they rank on the Iron Throne (giving new incentives in the bid to be king). Vassal houses start with more armies and better command tokens, though can only be assigned two orders per round. They also use an entirely different deck of character cards, with fan favorites such as Varys, Jaqen H’ghar, and Bronn.

The digital edition of the game has also made some enormous UI and quality of life improvements. Besides the added sleek battle animations, the game also keeps track of every option and turn a player can take. The game notifies you if a command cannot be executed, a supply limit is reached, or an action token is left unused. Something that the base physical game can’t. There was also an added alliance system added to help players ally, coordinate, betray, and keep track of their allies.

There’s also a Lobby multiplayer mode for the game but you’ll need to set up an account with Asmodee. But right now, the player base seems small, and depending on the match you’re placed in it can either drag out or unfortunately, be filled with trolls. The biggest complaint seems to be that multiplayer features a timer set to go off if a player goes AFK for too long. That will then replace that player with a bot, though depending on the room and established perimeters, it range from hours to even days of waiting.

Still, none of this compares to the biggest appeal about this game and why I think it’s deemed worthy of the title of GOAT Game of Thrones video game…

You Can Replay Moments From The Story in Challenge Campaign 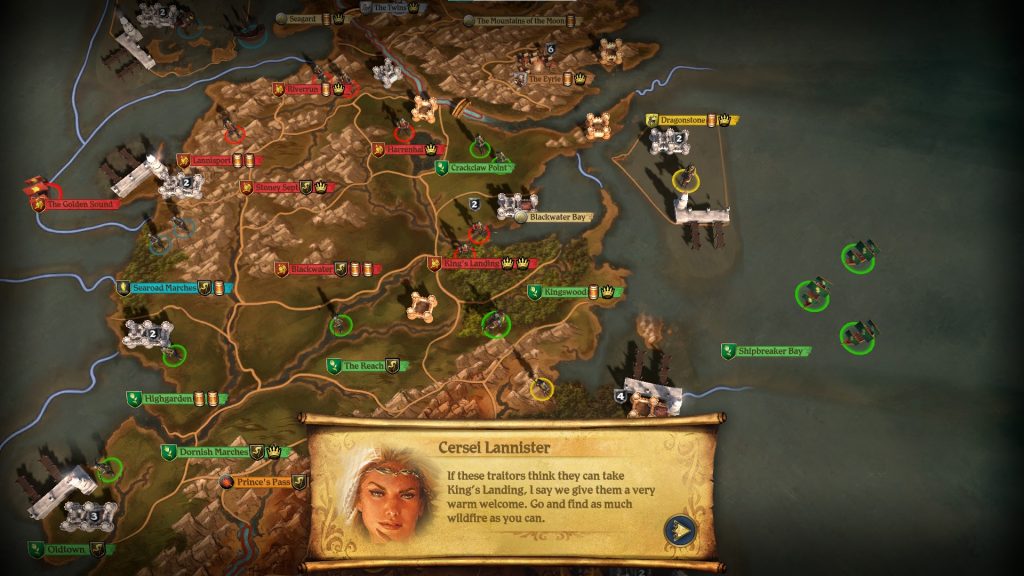 Hunt for Wildfire As Cersei Seeks To Burn Everything Down

If it’s not obvious by now, I am both a huge Game of Thrones and strategy game fan. So finding out about this feature made me joygasm more than Tyrion at a Littlefinger Brothel during Tournament Day. Now, fun fact,  we here at HeyPoorPlayer were actually one of the first ones to announce the game’s upcoming release date. And in my research for the digital edition, one of the first things that stood out was challenge mode. An enticing new feature that was, not surprisingly, incredibly challenging.

Challenge mode is basically this game’s story campaign. It’s an entirely different take on the classic Board Game that reenacts some of the best moments in Game of Thrones. Storyline objectives coinciding with the book’s history need to be completed. Likewise, alliances and requests for diplomacy with the AI are no longer allowed in this mode. To make matters more difficult, geographic location and unit sizes vary and coincide with that period depicted during the War of The Five Kings. 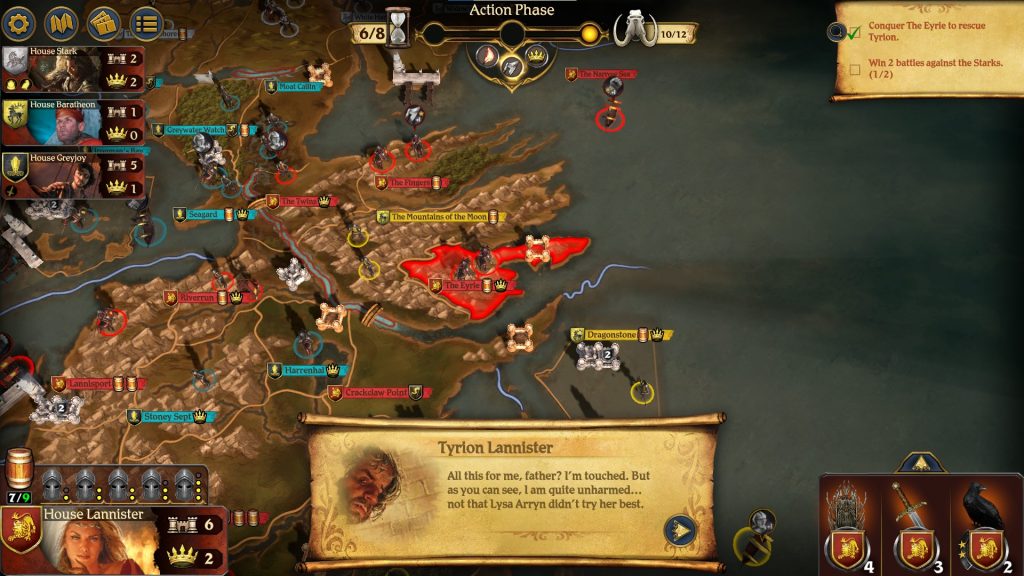 One of the first challenges in the game is for Tywin to rescue Tyrion from the Eyrie as the War against the Starks has just begun.

Whereas the regular game is more faction-based tactics, challenge mode feels more akin to real-time strategy games of the 90s. Something like the original Warcraft but turn-based. Challenge mode presents an entirely different way to look at the game, and oftentimes you’ll feel outnumbered. And though some missions are straightforward, such as Theon’s raiding the coasts to gain his father’s approval, or Tywin’s rescuing Tyrion from the Eyrie, other missions are incredibly difficult. Personally, I wasted an entire day at The Battle of The Blackwater, trying to harvest wildfire while King’s Landing was under siege by almost every faction in-game (You lose if it falls even once).

I’d spent many hours replaying challenges and failing again-and-again. Though it doesn’t take long to figure out, it was surprisingly fun, and a really informative way to learn about the different tactics and capabilities of each house. All by using methods I’d never even thought about. And I’ve played this game beforehand countless times.

If you like Game of Thrones for its war strategies and characters, or simply just thought the opening credits to every episode looked cool, you’ll probably like playing this game. The fact that it’s less than half the cost of the actual board game, has numerous UI and QoL improvements, and more importantly, includes a very fun campaign, makes this game a must-buy for any Game of Thrones gamers or fans. Excellent all-around. 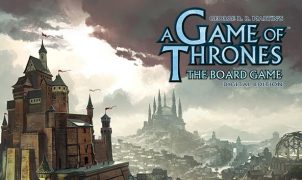 ‘A Game of Thrones: The Board Game – Digital Edition’ Release Date Revealed