Hoisted by My Cream Bastard

Hail fellow! Which is apparently a medieval way of saying hey y’all! Welcome back to Friday Night Bytes, where I attempt (with varying degrees of success) to marry my dual passions of cooking and video games. This week’s Friday Night Bytes is a little different. While it’s not actually about video game food, it is in the larger realm of dorkdom. This week’s medieval masterpieces (a word I use very, very, very loosely) come from A Feast of Ice and Fire: The Official Game of Thrones Cookbook by Chelsea Monroe-Cassel and Sariann Lehrer. On the menu are: Oat Cakes, Honey Biscuits, and Iced Blueberries in Sweet Cream (also known as a Creme Bastard). 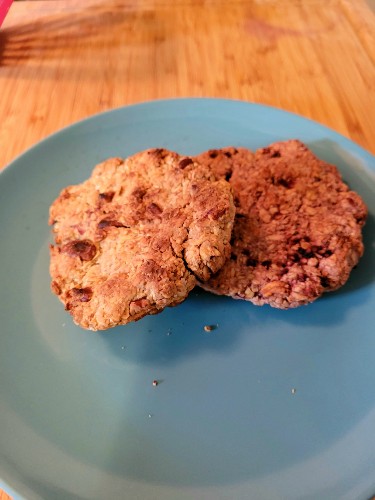 “When they woke the next morning, the fire had gone out and the Liddle was gone, but he’d left sausage for them, and a dozen oatcakes folded up neatly in a green and white cloth. Some of the cakes had pinenuts baked in them and some had blackberries. Bran ate one of each, and still did not know which sort he liked the best.” – A Storm of Swords, as quoted by A Feast of Fire and Ice.

Since this week’s theme is medieval food, I don’t feel too bad that these oatcakes are… less than pretty. Okay, they’re ugly. But I mean, they’re literally lumps of slightly wet oats that are baked. You can only do so much with that. This also lets me blame the food and not my atrocious presentation and decorating skills.

These oatcakes are pretty easy to make. Just combine some rolled oats, a little flour, honey, butter, and juuuuust enough water to make the “dough” cohesive. Then separate into two oat lumps and add nuts to one, berries to the other. I did make one change to these oatcakes: I swapped out the pine nuts for pecans. Fun fact: I suffer from a super weird, super random condition called Pine Mouth which leaves my mouth tasting like pennies for weeks after eating them. Since lumpy oatcakes are not worth having everything taste like a mouthful of loose change for the next two weeks, I figured any nut substitution would do.

I won’t say that the oatcakes are bad, but they’re not good either. The taste is perfectly fine – kind of like baked oatmeal. They’re totally TEOTWAWKI food. They’ll keep you full, and they’ll technically provide some nutrition, but you won’t be happy about the experience. The most charitable thing I can say about them is that if you eat one, you won’t want to eat for the rest of the day. And for the love of the old gods and the new, eat it with some coffee or tea. Otherwise it’ll glue your mouth shut.

The Husband’s Opinion: “They are drrrrryyyyyyyyyyyyyyyyyy. It’s like eating a Nature Valley bar. And that’s not a good thing.” 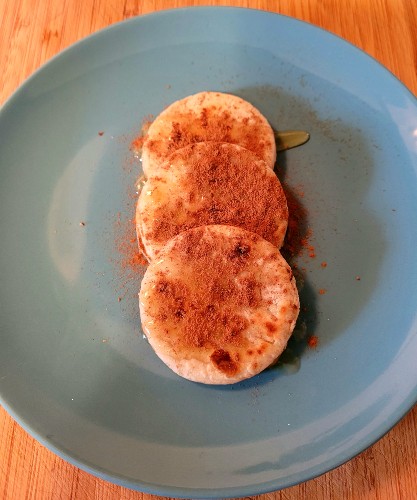 “For the sweet, Lord Caswell’s servants brought down trays of pastries from his castle kitchens, cream swans and spun-sugar unicorns, lemon cakes in the shape of roses, spiced honey biscuits and blackberry tarts, apple crisps and wheels of buttery cheese.” – A Clash of Kings, as quoted by A Feast of Ice and Fire.

I attempted to plate these in a way that made them look more appetizing, because these simple little biscuits don’t really look like much on their own. As you can see, I did a terrible job, mostly because the cinnamon decided to come out in a big fat blob that exploded on impact. What they lack in visual appeal, though, they made up in flavor.

These medieval honey biscuits were incredibly simple. The dough came together in about two minutes, and they cook up in about three minutes flat. The dough is made from nothing more than flour, salt, butter, and water. Like most biscuit doughs, the key is to make sure you don’t overwork the dough. You want it to just come together with next to no kneading. Then you roll out the dough into a nice thin sheet, and cut out your individual biscuits. From there, just heat up a skillet with a little oil or butter and fry these bad boys a couple minutes a side. Drench in honey and cinnamon and enjoy.

And enjoy them we did! They may be small, but these little pan-fried biscuits are almost stupidly delicious. They’re crispy, they’re flaky, they’re buttery, and the honey and cinnamon give them an almost dessert-like quality. Honestly, the only thing I’d change about them is to add the cinnamon to the honey first so that they’re evenly blended. I’ll definitely be making these bad boys again.

The Husband’s Opinion: “Thin, crispy, and stupidly delicious. I also appreciate that they’re the perfect size to just shove into my mouth in one bite. The raw cinnamon on top is maybe a little weird, but that wouldn’t stop me from eating them again.” 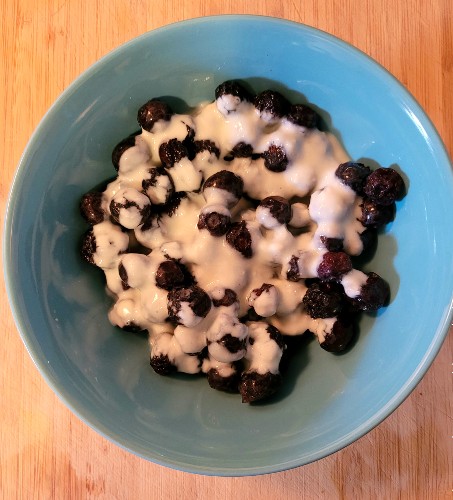 “From the Lord Commander’s own table,” Bowen Marsh told them. There were salads of spinach and chickpeas and turnip greens, and afterwards bowls of iced blueberries and sweet cream.” – A Game of Thrones, as quoted by A Feast of Ice and Fire.

I was really looking forward to trying this recipe out. In theory, frozen berries with some sweet cream sounds like a lovely, simple dessert. That, and everybody knows Jon Snow is the best part of Game of Thrones, and this recipe has you make what’s known as a medieval Creme Bastard.

The recipe is as simple as it sounds. You freeze some blueberries, and while they’re getting nice and chilly in the freezer, you put together the Creme Bastard. The Creme Bastard is basically just some milk or cream simmered down with egg whites and a bit of sugar. Once the mixture has gotten nice and thick, you remove it from the heat, and let it chill in the fridge, where it will thicken further.

Sounds tasty so far, right? Well, something goes horribly, unfortunately wrong when you combine the blueberries and the Creme Bastard. The frozen berries have an incredibly unappealing texture, somewhat soft around the skin, and hard and ice-cube-y in the middle. The Creme Bastard, meanwhile, has a decent flavor on its own, but when mixed with the berries, it just tastes like bland sweetness mixed with bland berry sweetness. The frozen berries also seem to make the Creme Bastard thicken in some places, while remaining its normal consistency in others.

While this may be the best dessert you can hope for on The Wall, those of us who haven’t taken the Black would do well to choose something else.

The Husband’s Opinion: “This is not for me. It just doesn’t work. When the blueberries defrost a bit, they’re weirdly chewy and squishy at the same time. The Creme Bastard by itself is okay, but there are just too many competing textures when you mix it all together. It just kind of tastes like vague sweetness.”

That’s it for this week’s Friday Night Bytes! I hope you had as much fun as I did on this jaunt down medieval memory lane. Tune in next week, where I’ll be recreating several potions from Zelda! 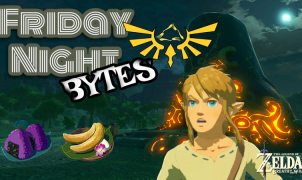 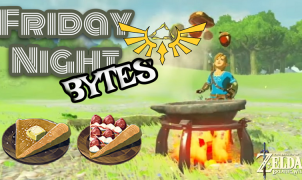