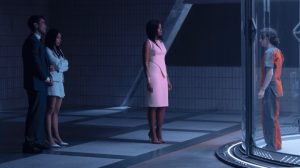 She-Hulk: Attorney At Law has gone on quite a journey since the start of this season. Its early episodes struggled to find a strong voice, so focused on exposition and set-up that they often forgot to be funny, an issue when we’re talking about a show billed as a legal comedy. Thankfully, once all of that was out of the way, the creative team found its way, and week by week, the show’s quality improved. The last few episodes have been universally excellent, but the season finale is the best episode of the entire season. Fully capturing what fans love about the She-Hulk comics, Whose Show Is This? brings the many different threads of this season together before tearing them apart, going places I wouldn’t have thought Marvel would dare. Despite a few minor quibbles, it solidifies the show as one of the strongest projects in the MCU’s Phase Four.

Picking up where last week’s episode left off, Jen is now locked in the same cell that once held her client Emil Blonsky. She lost it when the group Intelligencia leaked her private information and a sex video she never even knew existed in public, going on a destructive rampage. While no one was hurt, all the crowd saw was an out-of-control monster, the same way they once saw her cousin. This is completely unfair, anyone would have been furious about what was done to Jen, and any lesser reaction would be the abnormal thing. As Mallory Book points out, though, Jen isn’t anyone. She has superpowers, and if she loses control, there’s real potential for innocent people to get hurt. 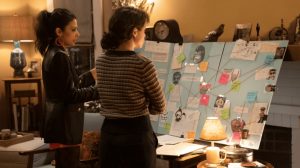 Even the government doesn’t want to lock Jen in prison. Apparently, someone hasn’t completely lost sight of the fact that she is the victim here. In order to drop all charges, though, they demand she wear a power inhibitor, the same condition they put on Emil Blonsky earlier this season. That means Jen can have her life back, but she can no longer be She-Hulk. Which is a bit of a problem when so much of her life, including her job, is tied to her being She-Hulk. Soon she’s lost her job, her home, and she’s sleeping in her childhood bedroom where her mom busts in every morning at seven to do her exercise. While she’s not given up on exposing who Intelligencia really are, her leads aren’t great. Feeling a ton of stress, she decides to head to Emil’s retreat to get away for a few days and speak to someone who might get what she’s dealing with.

While Jen may not have any leads on Intelligencia, her friend Nikki does. Using another embarrassing video, she manages to score an invite to a big get-together the group is having. Of course, this isn’t a group that’s going to let a woman in, but since they assumed she was a guy, she recruits Pug to infiltrate the place. This leads to a rather hilarious scene where he’s forced to try to fit in with the group, with Nikki in his ear telling him what to say, and him clearly incredibly uncomfortable. Josh Segarra has been fantastic all season, one of my only real complaints with the show is I want more of Pug and Mallory, but this is his strongest scene. 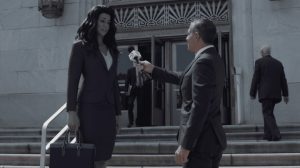 It turns out, the Intelligencia get-together is also at Emil’s retreat. He’s rented out his lodge as a speaking engagement, with him appearing as a speaker who only has the most generic platitudes to offer and clearly has no idea what this group is about beyond a general idea of not being satisfied. Oh, ya, and he does these speaking engagements as Abomination, violating the terms of his parole. When Jen finds out, she’s furious, but quickly these final scenes get out of hand as Intelligencia decide to attack Jen, Abomination moves to protect her, Nikki and Pug start freaking out, the Hulk swoops in from outer-freaking space to help save the day, and even Titania shows up for some reason. The scene is a mess, but that’s very much the point.

That’s when Jennifer stops things. Turning directly to the audience, she asks us if this is what we actually wanted? The sort of big nonsensical fight scene that so often ends a Marvel project, even when it doesn’t make any real sense for the story being told here. This season has been about Jennifer accepting her powers and coming to terms with being both Jennifer Walters and She-Hulk. Realizing both are important sides of her life, and she can accept both of them. That’s all been torn away for a big fight scene, but it doesn’t have to be. Jen is a Hulk, she smashes all kinds of things, including the fourth wall, and by doing so, she’s more than capable of smashing this ending into something that makes sense for her and for this show.

I won’t go into detail about what comes next, its something you have to see to believe, but its far and away the most memorable ending of any of Marvel’s Disney+ shows and up there with the ending of any MCU project to date. It’s very meta, in a way which will likely hit hardest with those who are the most into the MCU, but even casual fans should get a laugh out of things. It lampoons not only the MCU, but also the culture around it, while still showing a deep love for this shared universe. Where it leaves things in the end perhaps wraps everything up a bit fast, but the process of getting there is glorious.

She-Hulk: Attorney At Law ends its first (and hopefully not only) season on an incredibly high note, bringing the series’ various threads together in a way which should satisfy viewers looking for a twist on Marvel’s standard formula. If you just want a cool big fight this may not be for you, but for everyone else I highly recommend you check it out.