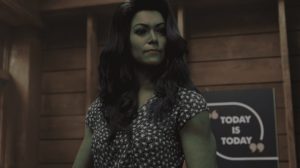 There’s little in life that feels better than when someone likes you for who you are. Through recent episodes of She-Hulk: Attorney At Law, we’ve seen Jen battle with this as she tries to connect with people and find any semblance of a romantic life that’s about her and not just about who she can become. That’s why it was so cool when during last week’s episode, she met Josh at her friend’s wedding. A cute guy who actually seemed into Jennifer Walters and not She-Hulk? What a dream.

This week’s episode, The Retreat, starts off with that dream ongoing. A montage of their first few dates, set to HAIM’s Now I’m In It, shows what looks to be the beginnings of something real Multiple dates where the pair just talk, both seemingly smitten with each other, but aren’t rushing into anything. Cute texts during the day followed by more adorable dates at night. Jennifer setting boundaries that Josh seems to respect, even when he perhaps might have expected more, followed by her letting those boundaries fall as she realizes she wants more.

This montage would fit perfectly into a romantic comedy, one of the good ones. Which makes it even harsher when the morning after the two finally hook up, Josh is gone. At first, Jen doesn’t think too much of it. She texts him that she had a good time. The impulse to text again when she doesn’t hear back immediately is there, but she resists, wanting to play things cool. Days pass, though, and she still hears nothing from Josh. There are plenty of good excuses for why he might just be busy, but as the weekend comes and starts to go, those excuses start to look more and more flimsy. Something that felt so good suddenly feels wrong, bringing back nagging insecurities that this relationship was supposed to help push away. I have to say, my first thought was that this was a bad move by Josh. Jen may be chill, but she’s still a Hulk, and I would not want to be on a Hulk’s bad side.

A call first thing Sunday morning isn’t from who Jen actually wants to hear from, but it does at least provide a welcome distraction. Our old friend Emil Blonsky’s power inhibitor isn’t showing any readings. Which could mean a malfunction, or it could also mean the Abomination is back. His parole officer needs to go check on it at the meditation retreat Blonsky is running now, but he’s understandably concerned that he could be walking into a fight with a ten-foot-tall monster, and he’d be a lot more comfortable if he had a Hulk as backup. Jen wants to make sure her client is being good, and any excuse to not think about Josh is welcome, so it’s time for a road trip.

It turns out, the Abomination is not waiting for them, just normal Emil Blonsky, who claims he was shocked by an electric fence while rescuing his favorite chicken Princess Silk Feather. Fixing the inhibitor is pretty easy, and soon, the parole officer is rushing out of there, but Jen’s attempt to leave is interrupted by the destruction of her car by a couple of the residents of this retreat working out their differences. We soon start to find there are a lot of super-powered individuals in the MCU working through issues who Blonsky is trying to help. A parade of D-level Marvel characters, including Man-Bull, El Águila, the vampire Seracen, and Porcupine, show up to form a very fun group.

Jen is invited into their therapy session to work out some issues Blonsky notices in her life, but she’s resistant, instead desperate to find somewhere on this huge property where she can get some sort of data connection and do some work. Of course, the one location that seems to get any signal is in their group therapy, so Jen ends up joining, only to be confronted by a familiar face. The Wrecker, a member of the Wrecking Crew who attacked her all the way back in the third episode of the show. While that makes things tense initially, things calm down, and he seems contrite, though he doesn’t reveal what that attack was about to her. Whether that’s due to him still having something up his sleeve or having only been a hired gun with no deeper knowledge of their plans, though, is still unknown.

The final scenes in The Retreat are among the most satisfying of the entire series. While definitely funny, these sit-downs with an unlikely support group make Jen finally confront the journey she’s on, which seems to be going in a slightly different direction than they do for comic She-Hulk. Yes, she still needs to accept that She-Hulk is a part of her, and her growing comfort with that side of her life was what two weeks ago’s episode was all about. This week though, she also has to accept that Jennifer Walters is also enough though, and that if people aren’t there for both sides of her life, that’s their loss. It’s time to stop spending all her energy on people who aren’t willing to spend their energy on her. There absolutely are people in the world who will want her for who she is, not only who she can be, and realizing that is a powerful moment.

In the final scenes, we learn a bit more about Josh and definitely see some hints toward next week’s episode, but The Retreat puts the focus squarely on Jennifer Walters, even more so than the episode literally titled Just Jen, and it’s for the better. While I called last week’s episode the best of the series thus far, only a week later, She-Hulk: Attorney At Law has topped it again. Most of these MCU shows have had issues with consistency, but She-Hulk actually is getting better as we reach the end of the season, and I can’t wait to see how things wrap up.