The Legend of Bum-Bo Review (Switch) 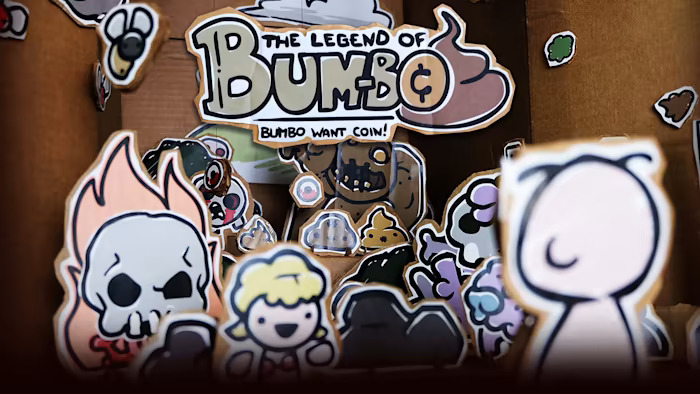 The Legend of Bum-Bo isn’t a new game. As a matter of fact, it’s almost three years old. I’ll be honest with you—when this game released, I didn’t initially buy it. It wasn’t because I didn’t want to play it (quite the opposite, actually), but because I was hoping that we’d get news of a console release within a few months. But, that never happened. And, not wanting to miss out, I just decided to get what I assumed was going to be this perma-PC-exclusive Binding of Isaac title. I absolutely loved it and, despite the PC gaming scene not really being my thing, ended up playing it to the point where I basically burnt myself out. And that was that, as far as I was concerned. But, wouldn’t you know it, Nicalis finally decided to grant my wish a whole three years later—and, not surprisingly (at least to me, anyway) it’s just as good the second time around. 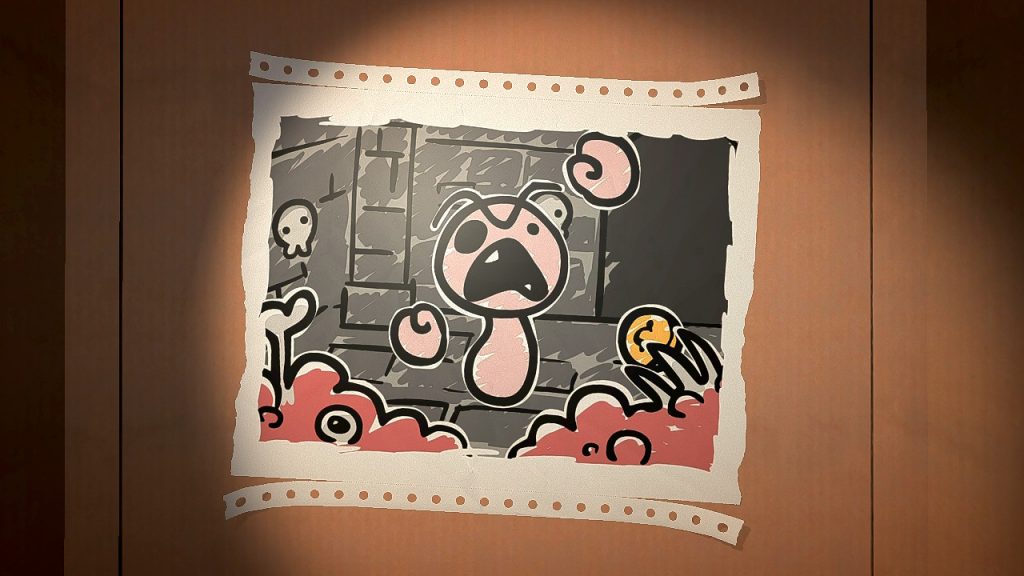 The Legend of Bum-Bo is a prequel to The Binding of Isaac, and connects to the main story in ways that are both unexpected and important. It doesn’t star everyone’s favorite eternally crying basement escapee, though, but a gent by the name of Bum-Bo! And it just so happens that this game’s story begins with Bum-Bo living his best life. He lives behind some random house in a box with a bag full of rotten trash and a shiny coin. It’s not exactly what I’d call high living, but, to Bum-Bo, life is good—and that’s all that matters, here. Unfortunately, some ne’er-do-well spots our poor little friend enjoying his coin, steals it, and runs off. Yikes! Talk about being a meanie-head, am I right? Fortunately, Bum-Bo is smart, strong, and brave, so he grabs his bag of trash and follows the shadowy figure in an attempt to gain his precious shiny back—and he’s going to smash anyone that gets in his way!

The Binding of Isaac is an incredibly bizarre series. Because of that, it’s easy to get swept up by everything that’s going on and not really bother to put everything together. There is, however, a significant story being told—and this game adds to it considerably. Sadly, I can’t go into it too much because all of said attritional story is unlocked either 1.) after you beat the game or 2.) after you 100% the game. But it does an incredible job when it comes to adding some depth to Isaac and his family. Also, on a lighter note, Bum-Bo himself is pretty funny from start to finish—a true win-win! 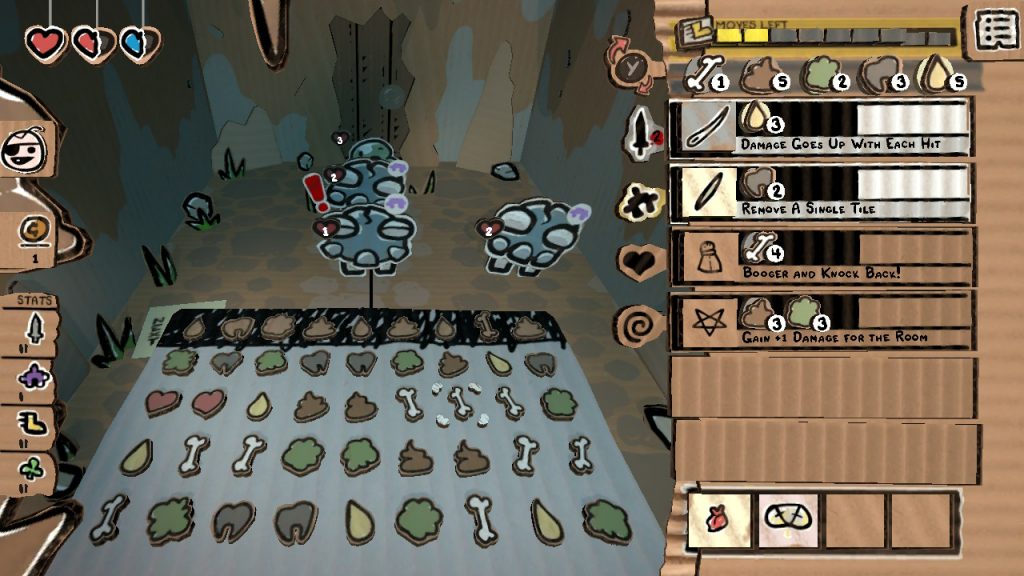 Primed enemies have an exclamation mark above their heads. Always deal with them, first!

A lot of things might come to mind when you think “Binding of Isaac prequel,” and I’m willing to bet that a decent a mount of them are of the more action-oriented variety. You might be surprised to know, however, that The Legend of Bum-Bo is actually a match-four puzzle game—and one with beautifully animated papercraft graphics and and an absolutely killer soundtrack at that (I’m lookin’ at you, Halls of Belial!). Yes, I’m being completely honest with you. That description is downplaying things by, like… a lot, though. And that’s because  it’s also a roguelike/deckbuilder/RPG! I know, I know, it sounds like a lot—and it kind of is—but, surprisingly (or perhaps not at this point) it all comes together extremely cohesively in the end, so just let me explain.

Much like in The Binding of Isaac, The Legend of Bum-Bo will have you traversing a series of procedurally generated rooms, while forcing the player to deal with any enemies that stand in their way. Rather than relying on action-oriented combat, though, fights are turn-based, with the player only being able to attack by using a puzzle board. Each piece on the board represents a different kind of basic attack. Bones and teeth deal direct damage to enemies, while the rest act as defensive/utility moves. In between your turns, enemies will also have the chance to attack you—with most taking a turn to “prime” their attack—meaning that you have to play defensively as well as offensively. It’s an incredibly simple style of gameplay that’s easy to pick up. But, just like with The Binding of Isaac, actually being able to do well is a completely different matter. 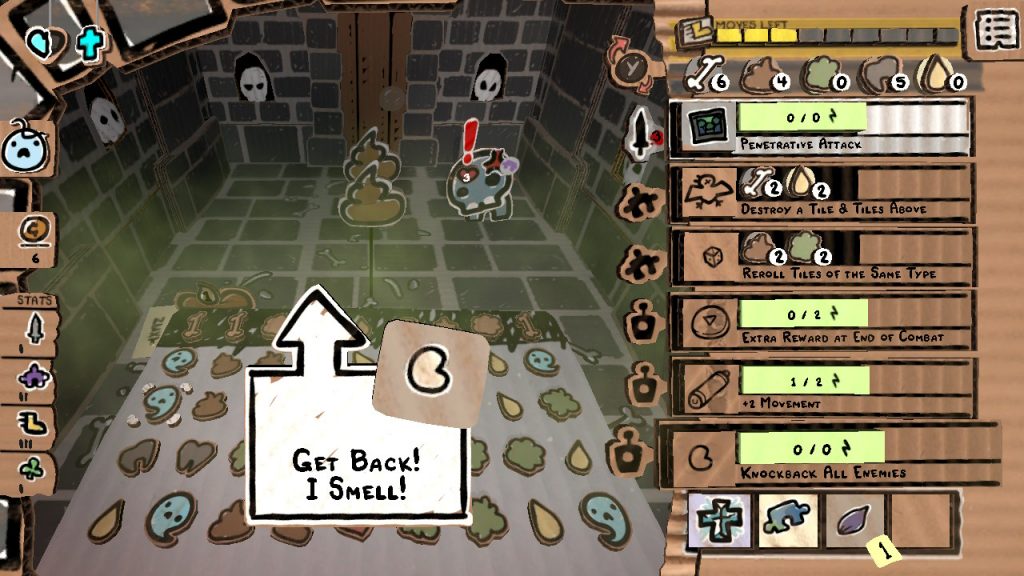 Getting to the end requires mastery of combos.

The real reason that The Legend of Bum-Bo is so hard is because it’s easy to die. Like, really easy. You can’t just get away with trading hits with enemies—especially after the forced “Everything is Terrible” (which of course this game has). Fortunately, there’s a way around assured death—magic. Matching tiles doesn’t just let you throw a tooth at someone or poop on the board (that’s not a typo)—it also nets you mana. Mana, not surprisingly, can be used to cast spells. Spells can do a lot of basic things that you’d expect—like hurting enemies, healing Bum-Bo, and restoring moves—but there are also a lot of spells that can directly manipulate the board. These are the real winners right here. The Legend of Bum-Bo is generous enough with spell diversity that you can usually find some kind of combo that will—after a while—feed into itself. These require a little bit of luck, and, admittedly, some skill, but they’re so much fun when you can set them up.

As much as I’m hyping things up, though, I’m aware that the game isn’t exactly easy. And it isn’t always exactly fair, either. There have been several times times where I thought that I was doing well only to be forced into a room with so many enemies and so few moves that I literally couldn’t win. There have also been times where, despite usually being generous with spells, power-ups, and trinkets, the game just doesn’t seem to want me to win that round. The Legend of Bum-Bo isn’t going to chew you up and spit you out as brutally as The Binding of Isaac will, but there’s still going to be plenty of trial-and-error. Walking into the game thinking that you’ll master it every single time is a guaranteed recipe for failure.

The Smell of Success

The Legend of Bum-Bo is, first and foremost, a game for fans of The Binding of Isaac. But I don’t think that simply relegating it to that is fair. Despite its prequel status, The Legend of Bum-Bo is a unique, addictive, and extremely fun roguelike puzzle game oozing with Edmund McMillen’s signature bizarre charm. Sure, I’d recommend it to BoI fans, but I’d also recommend it to people who like engaging puzzle games. If you’ve never been exposed to McMillen’s work before, you might be a little surprised at first, but don’t worry—it stops being weird after a while.

Full disclosure: A The Legend of Bum-Bo code was provided to Hey Poor Player by the publisher. 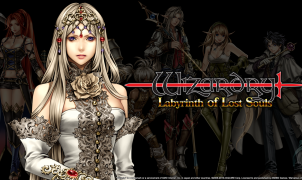