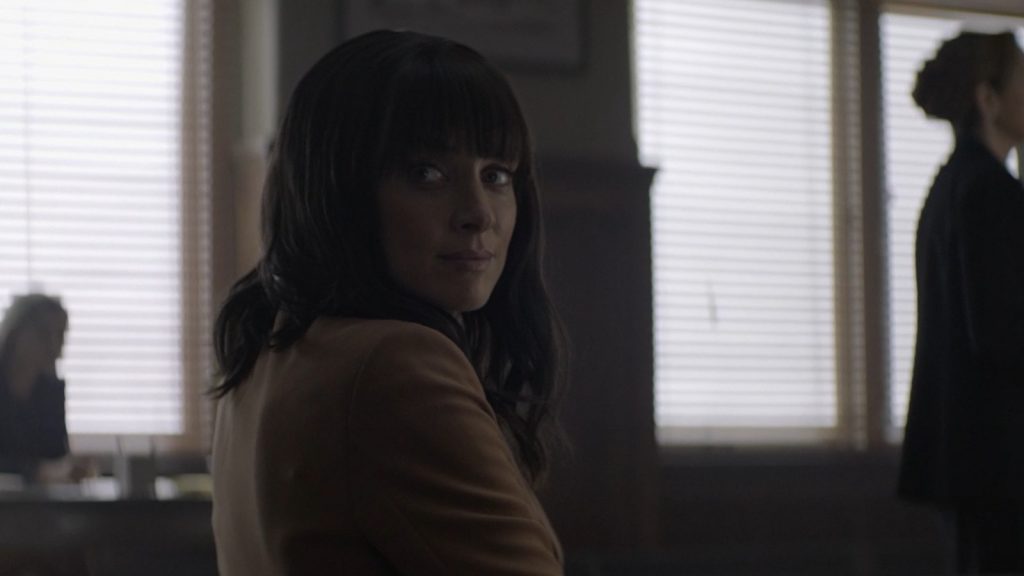 I have to admit, We’re All Mad Here had a pretty clunky and slow start. For a while I was expecting to give this penultimate episode of the season a lower score, but then I got to the second half of the episode. And not only did that redeem the slow beginning, but it had a jaw dropping revelation I truly didn’t see coming. And frankly, after the way We’re All Mad Here ends, I cannot wait to see how they wrap up Batwoman Season 3 next week.

Part of my issue with the episode was the fake out at the beginning. I at no point believed it was actually happening, which hurt my immersion. It starts with Alice seemingly breaking into Marquis’ office, beating the hell out of his goons, finding the buzzer, and using it on herself. Then she wakes up, and is magically Beth again. A courtroom scene follows, and she’s declared a victim of circumstance, and acquitted of all charges. It was just too easy. Then I was proven right when Alice, now Beth, goes to her gravestone, and suddenly finds Ocean alive and well. For a moment, anyhow. Then he says she doesn’t deserve happiness, and starts dying in front of her, only for Alice to disentangle herself from the hallucination. She wakes up in the subway, furious and terrified.

We Having Fun Yet? 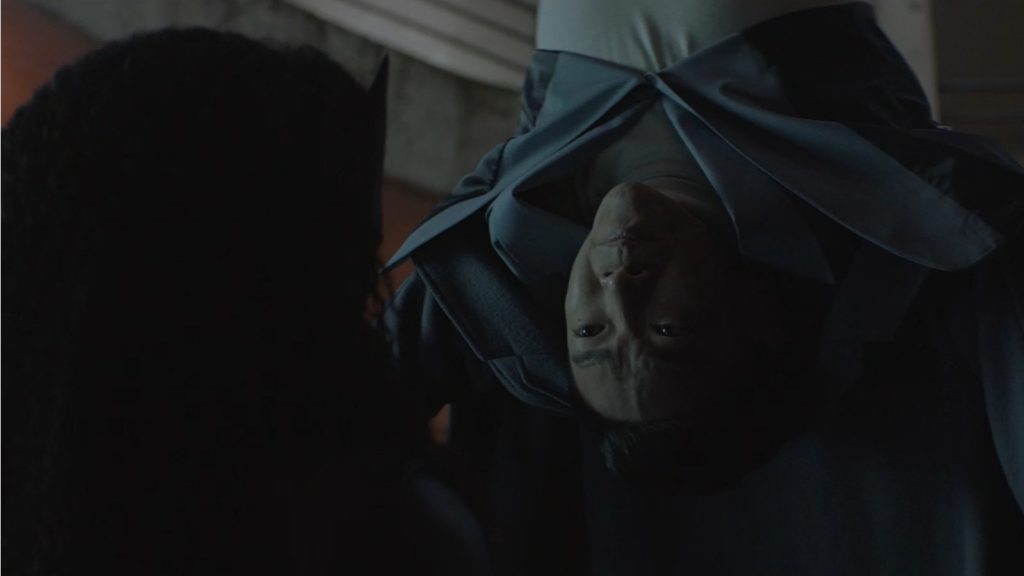 Meanwhile Batwoman manages to capture Marquis’ reclusive lawyer in a parking lot, and demands Marquis’ location. This is contrasted by a very satisfied Sophie waking up in Ryan’s bed, only to find she’s alone. As she starts dressing, the door opens, and she thinks it’s Ryan, telling her she better have coffee. Turns out it’s actually Jada, and she wants something. Sophie thinks that thing is protection from her deranged son, but the older woman contends she wants to spend time with her daughter. Regardless of the truth, Ryan soon arrives and shows both women what she stole from the lawyer.

Looking at Marquis’ calendar, they find information about Barbara Kean, of all people, and the Black Glove Society. If you read the comics, you’ll know that’s Barbara Gordon AKA Batgirl’s mom. There’s mention of J.J., Keans son, who was also a complete murderous sociopath. Something about the discussion freaks Jada out, and she makes an excuse to leave. Sophie follows her out to confront her, asking if Jada is concerned Ryan will learn she was part of the Black Glove Society, along with Barbara Kean. Jada tells her to let it go before getting into a car she called. Moments later, another car arrives, and Sophie realizes Jada was taken by a copycat car, and is now a hostage.

Alice isn’t doing well, and breaks into Mary’s clinic on the hunt for anti-psychotic drugs. She’s crazy, but not so crazy she can’t tell she’s falling apart. She says she really needs that hand buzzer, and Mary says Ryan needs it for her brother. Alice counters, saying Mary needs it for her sister. Then all of Mary’s guilt over her actions as Poison Mary spill over, and she blames Alice for letting her commit atrocities. There’s a huge break in their relationship, right when both women need each other.

I Not Only Deserve It, I Need It 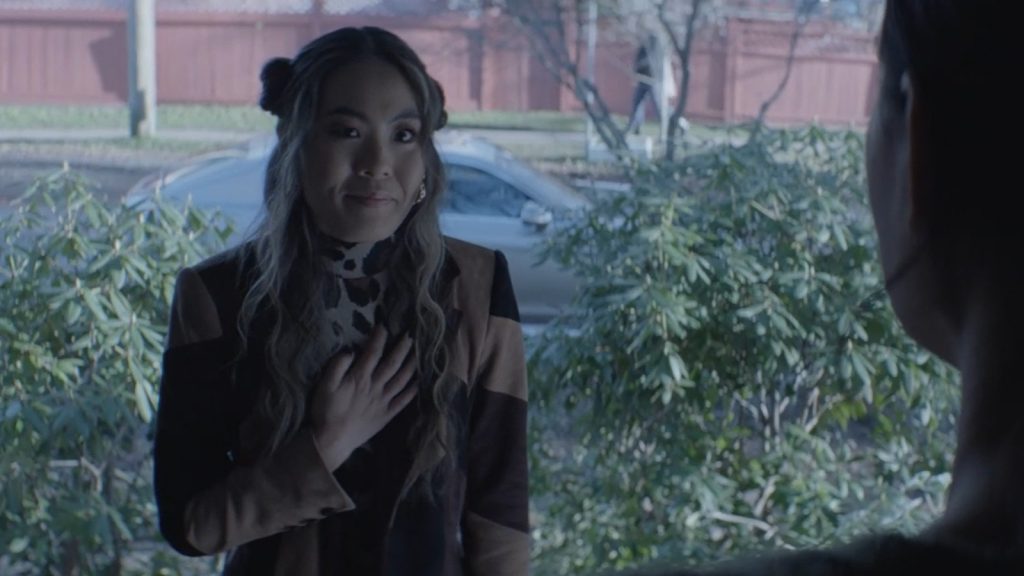 Mary still wants redemption, and goes to the house of the man she killed to make amends. She talks with his overwhelmed wife, and when Mary says she has information about who killed her husband, she’s invited in. Right as Mary is about to unload all her guilt and admit she was the one who killed the man, the wife says someone already admitted they did it. Turns out, Alice felt badly for what Mary said, and tried to do the sisterly thing and said she killed the man. Mary is overwhelmed with emotion, and realizes she may have been too hard on her crazy sister.

We’re All Mad Here also contends with Ryan and Sophie’s new relationship. Despite last week’s self awareness, Ryan is still uncomfortable being honest about the situation. And since Sophie has never been open about being in a relationship with a woman, she’s afraid Ryan may not be the woman she thought. While Ryan tries to blame her hesitation on the job, Sophie isn’t buying it. Luckily, there’s a payoff to this extended argument at the end of the episode.

Get Out Of My Head! 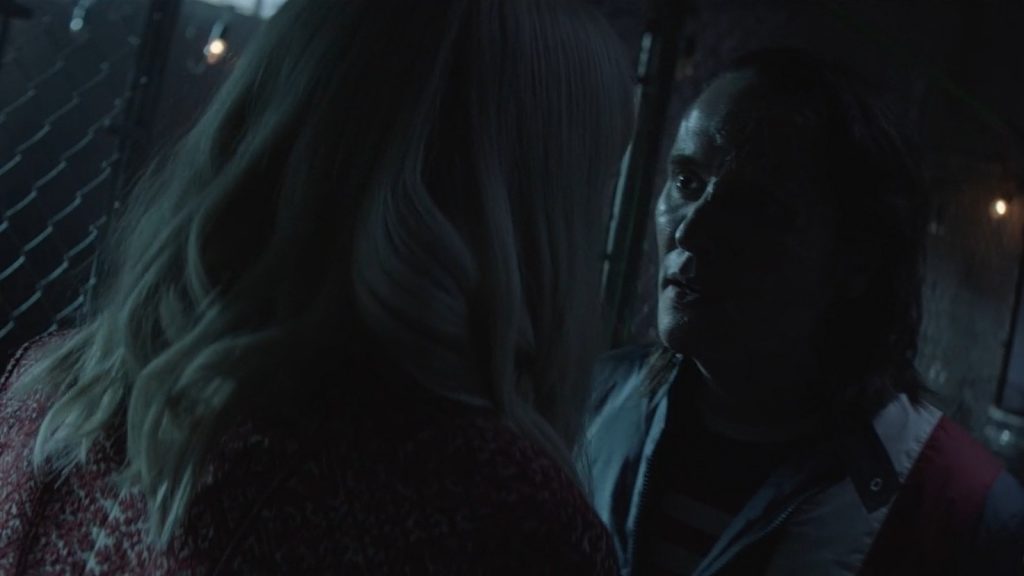 Unsatisfied with how things went between her and Mary, Alice heads straight to the Joker’s den to find the buzzer. She starts hallucinating her dear friend Mouse. At first she’s grateful to see him again, but then her guilt starts eating her alive. Mouse starts saying what Ocean did, that she doesn’t deserve happiness after the crimes she committed, including murdering him. She pushes the hallucination aside, and goes after Kiki Roulette. The women struggle back and forth, and right as Kiki is about to attack Alice, she gets shot dead by Marquis. He’s surprisingly deferential to Alice, seeing her as a peer, and there’s actual chemistry between them. Unfortunately for Alice, he’s also committed to using the now modified hand buzzer on someone else, and he knocks her out with a cannister of the Joker’s laughing gas.

Luke does his techno wizardry, and finds that the car which took Jada was hired by Wayne Enterprises. Which means it’s Marquis. Cut to Alice waking up in a room with him and several robed people. Turns out, Marquis is after the Black Glove Society members, including his mother. He gives a story about the founding of the group, and how it all began with Marla Elliot, AKA Hush’s mother. Young Tommy Elliot wanted to be like Bruce so much he tried to orphan himself by murdering his mother. Thus, the BGS was set up to protect rich and powerful people from their demented children. So, Marquis has a game to play. He spins a wheel, and depending on who it lands on, he’ll kill them with whatever they used to control their children. He starts with Barbara Kean. She tried to use experimental medication to make her son normal, and left him a drooling idiot. So all the drugs she used on him are used on her, and she’s seemingly killed by it.

You And I Were Born On The Same Day 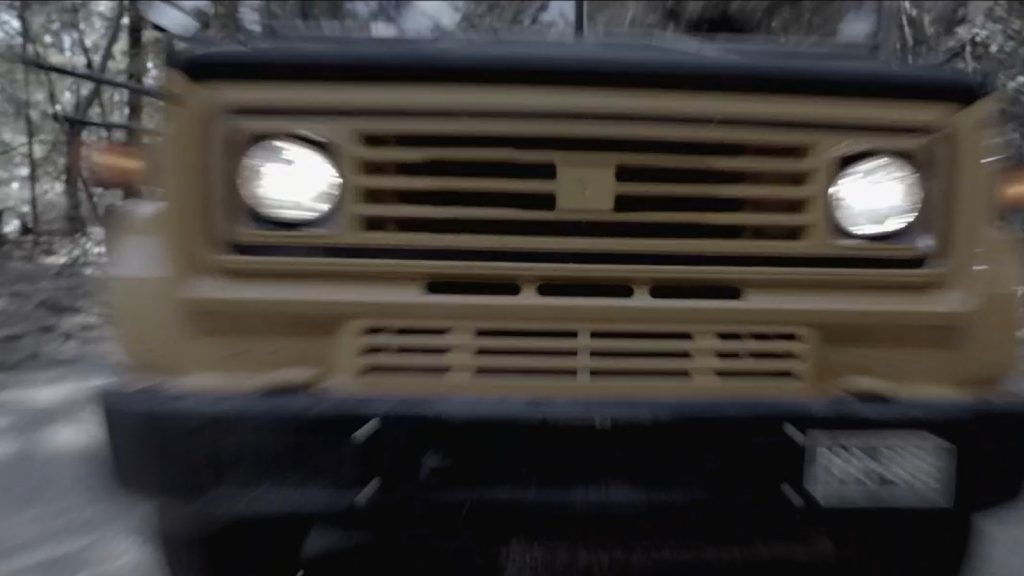 After Marquis makes short and bloody work of the BGS members, all that’s left is a blubbering and horrified Jada. He wants to use the buzzer on her, and then freeze her like she planned on doing to him. Alice stops him, still eager to use the buzzer on herself. They fight, and Marquis offers that she can be the Harley to his Joker and rule Gotham together. She isn’t interested, and says he has that relationship backwards anyways. They’re from different schools of Looney Tune, she says. He then reveals that the day the Joker changed him was also the day Beth, Kate and their mother were driven off the road. And they were driven there by a mad Joker driving the bus. In other words, in Marquis’ deranged mind, they were both created on the same exact day. When it seems he’s going to buzz Jada, Alice offers him some unspecified knowledge that would make the Joker jealous.

Ryan and Sophie finally arrive. Ryan finds her mother, and Sophie unfortunately finds Alice. The madwoman manages to take Sophie’s gun, and using it as a deterrent, is about to buzz herself. Then Batwing knocks the buzzer loose, and with his help, Sophie is able to take poor Alice down. Ryan meanwhile finds Barbara isn’t dead, and is quickly attacked by Marquis. It’s a fierce sibling battle, and Marquis gets the better of his sister with a pistol. He’s about to freeze her when Jada arrives, and blasts his cannister with her own gun, sending him running. For better or worse, Jada seems true to her promise of never leaving her daughter again. Additionally, she’s finally given up on saving her son, and casts him aside.

Let’s Have Some Fun 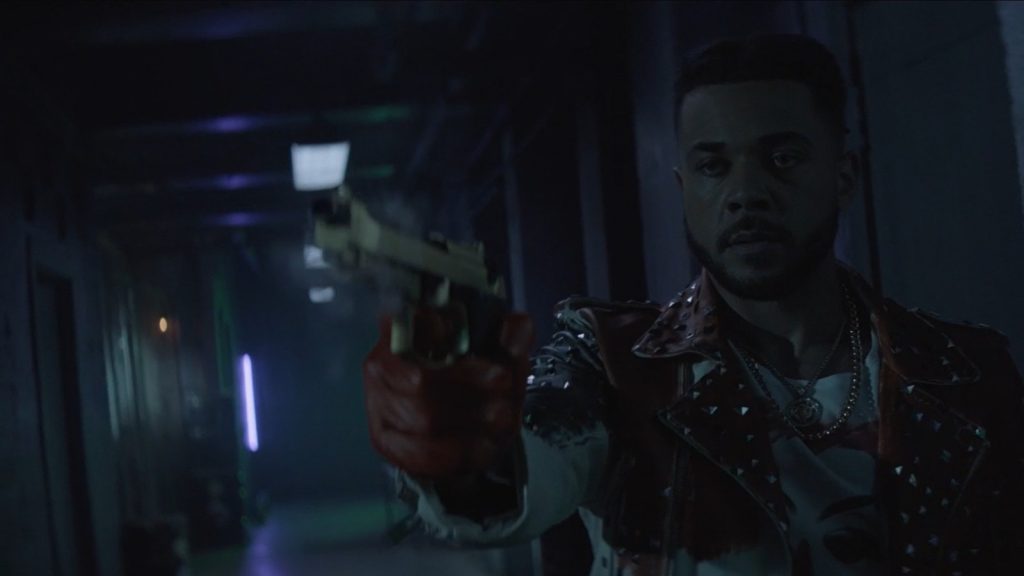 Ryan and Sophie finally agree to be open about their relationship, which is made even better when Mary and Luke arrive. First Ryan asks for 24 hours to deal with Marquis, and then Mary realizes the women are seeing each other. Her outpouring of joy is infectious, and really helps bring the group dynamic back. Back in Arkham, Alice is haunted by visions of Mouse and Ocean, and attacks one only to find it’s Mary. Mary thanks Alice for taking the blame for her, but Alice seems overwhelmed by something. And then she reveals she told Marquis how to access the Bat Cave. The episode ends with him walking through the Bat Cave, admiring all his fun new toys.

Like I said earlier, the last half of We’re Mad Here really came through. I’m very hopeful next week’s Batwoman Season 3 finale lives up to the potential I see, even though I’m a little worried by similarities to the end of last season. Either way, tune into HPP next week for our coverage of the end of Season 3!