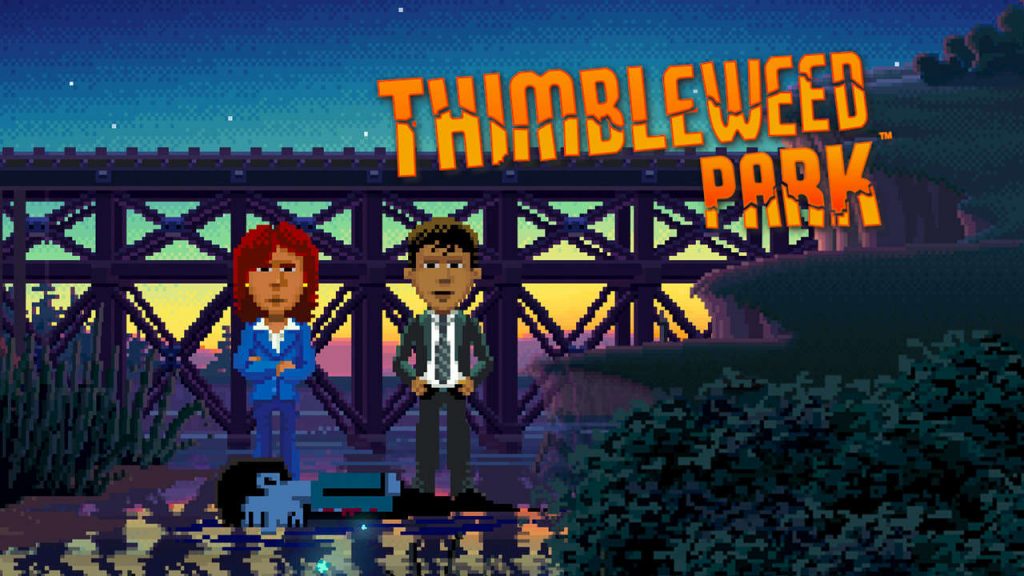 Most fans of Maniac Mansion and Day of the Tentacle probably have already experienced Ron Gilbert’s new point and click adventure game, Thimbleweed Park, but now that it’s on the Nintendo Switch, some may want to take a trip to the wacky town again. Then again, if you’re like me and haven’t had a chance to take the trip yet, now is there perfect time to do so!

If you’re  looking for an  in depth review of Thimbleweed Park, be sure to check out Francis DiPersio’s glowing write up. In this semi-review, I wish to discuss smaller details about the game, and how playing on the Nintendo Switch has some major benefits. I, for one, believe the Nintendo Switch offers the best way to play and I’m here to tell you why. 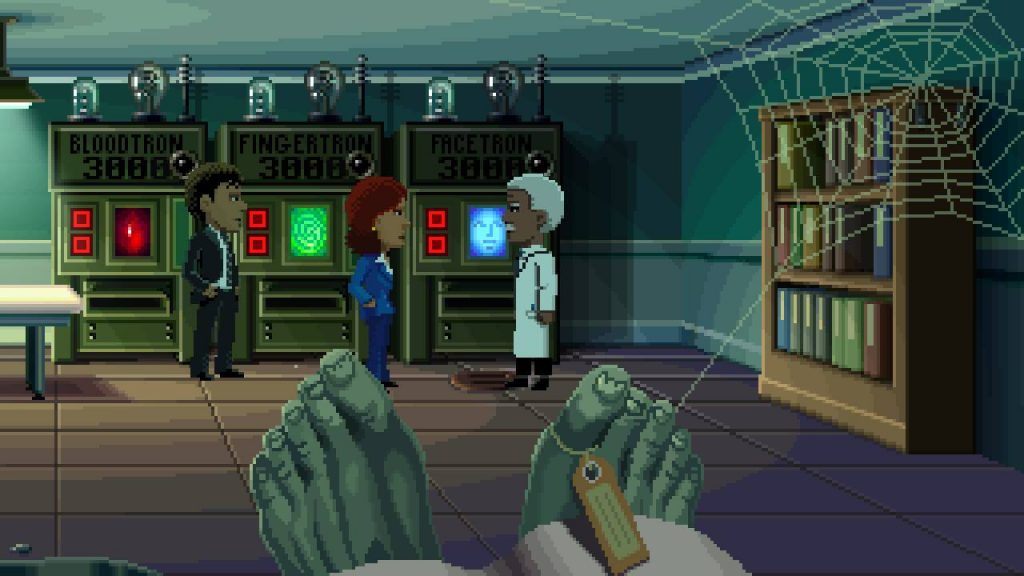 Anyone see the toenail clippers?

For those that are unaware of Thimbleweed Park’s story, let me give you a quick rundown. The year is 1987 and the once-thriving titular town of Thimbleweed Park is a shell of it’s former self. The town’s main source of income and employment, the pillow factory, has gone belly up and it’s population is dwindling due to the economic downturn. A recent murder has brought two FBI agents to the town and together they must solve the murder and bring peace to Thimbleweed Park.

Solving the murder depends on how well you, as a gamer, can search every nook and cranny of the town. Similar to most point and click adventures, you’ll be in control of several different characters at a time, and you can switch between these characters to trade items as well as solve puzzles. 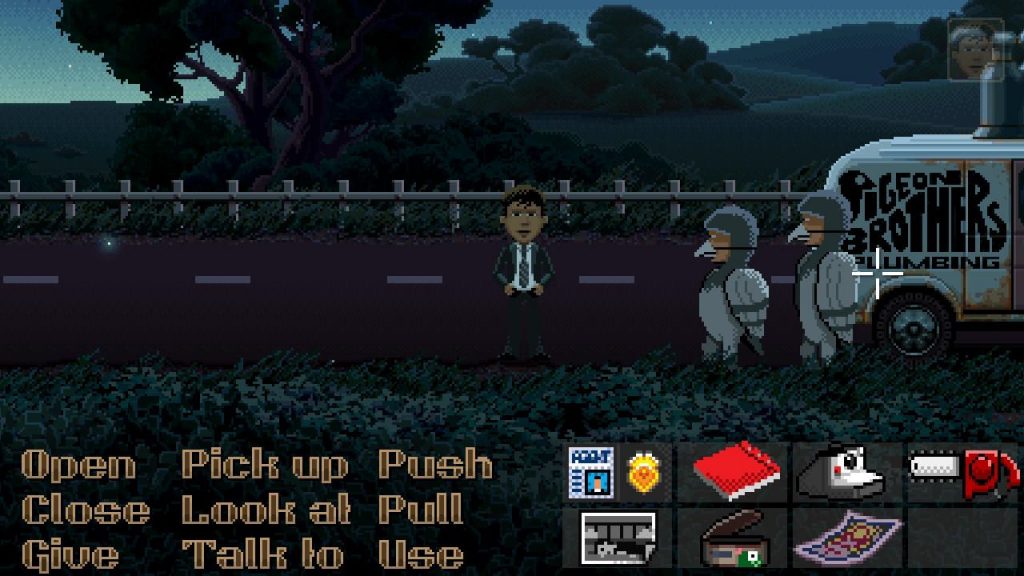 Thimbleweed Park’s interface is very easy to navigate and fans of the genre should feel right at home. Several commands appear at the bottom of the screen, such as “pick up”, “push”, “pull”, and “give”, and you must choose which command you want the character to perform, and then click on the part of the environment (or your inventory) that you want to interact with.  It’s a tried and true formula that has been perfected throughout the years in adventure games.

So how does the pointing and the clicking work on the Switch? Well, similar to the PlayStation Vita, the Nintendo Switch offers gamers a touch screen, which plays extremely well for games of this genre.  If you’ve played Day of the Tentacle on the Vita, you know exactly what I’m talking about. A simple touch of the command that you’d like to perform followed by a touch of the environment on the screen, and volia, you’ve got your action. Since the Switch’s screen is so much bigger than the Vita’s, you’ll not have to worry about accidentally pointing at the wrong action (like I’ve done thousands of time on the Vita).

A Pixel is Worth a Thousand Words 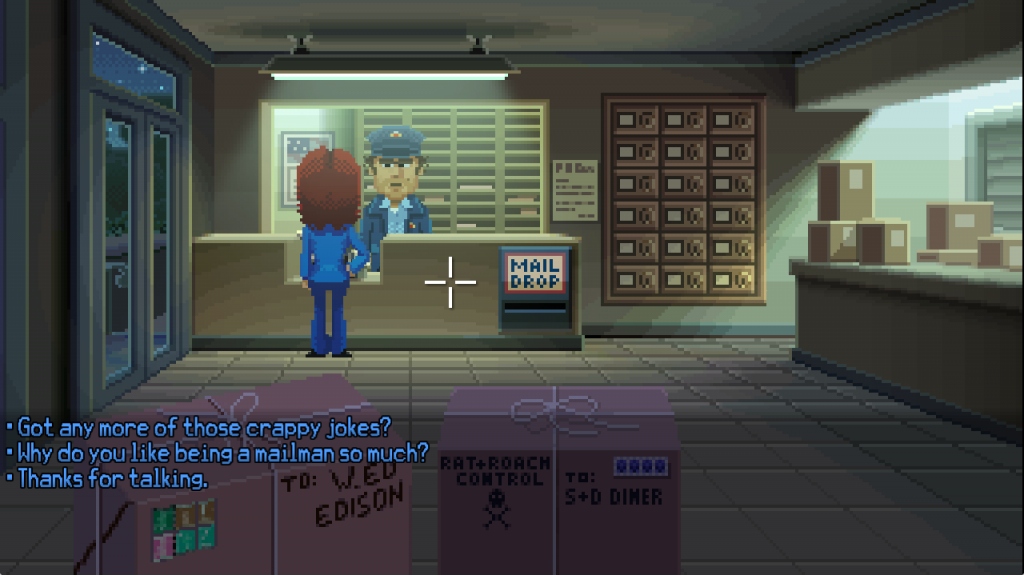 Additionally, tossing the Switch in the dock to play on your television is a cinch, and the game looks truly stunning! Fans of pixel art will be in awe. By doing this you will forgo touch controls, but “clicking” is done by simply clicking in on the thumbstick. Also, basic actions such as “look at” or “open”  are always your default action. This made things a whole lot easier and saved me hundreds of clicks throughout my playthrough. 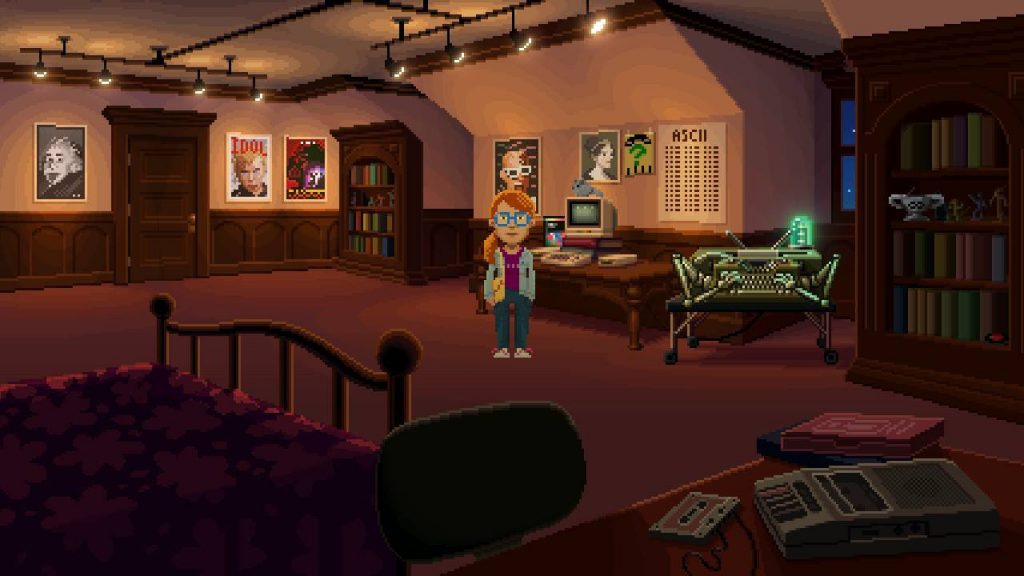 There are so many 80’s references here!

So where does the Switch falter? Well, I did get some frame drops here and there. This usually would happen when some loading was going on behind the scenes, but I did see it happen during random times as well. This is confusing considering that Thimbleweed Park isn’t a graphical powerhouse.

Also, while sharing screenshots with my EIC, we noticed that Dr. Fred and Nurse Edna from Maniac Mansion have been removed from a scene in the game (below). Maybe a Lucas Arts licensing issue? Either way, it was disappointing and noticeable. 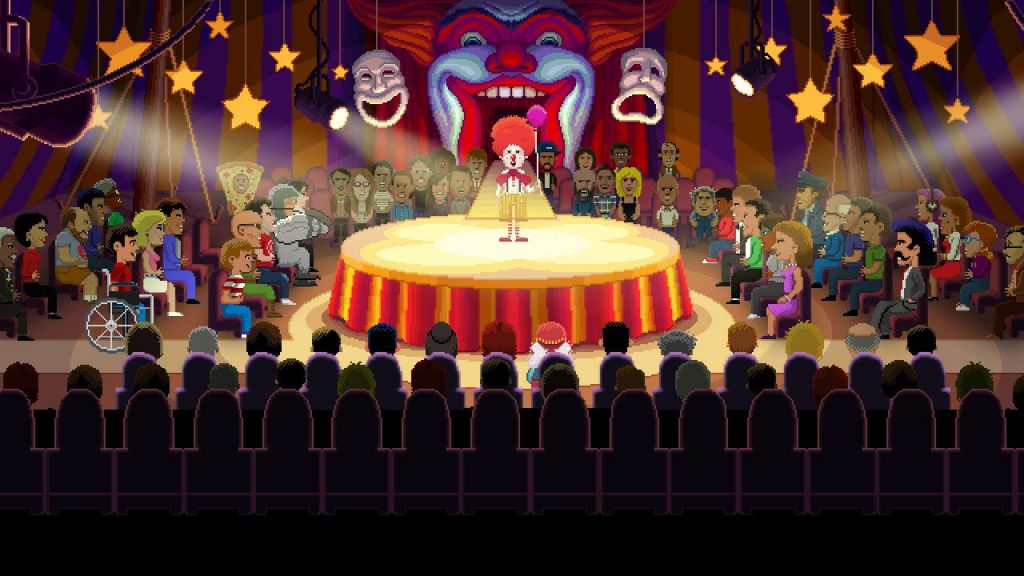 Where are Dr. Fred and Nurse Edna? I see two empty seats on the left!

I also ran into issues during the later parts of the game while controlling all five characters at once. During these sections of the game a drop down menu of controllable characters would appear when the controlled character’s portrait is touched. Because of this I was unable to click on the top right corner of the in-game phonebook without accidentally bringing up the character pull down screen. Thankfully, this can be avoided by using the Switch’s analog stick, but the habit of simply touching the screen to perform an action dies hard.

These small  issues didn’t dampen my enjoyment of Thimbleweed Park one bit though! The game is amazing, the characters are all memorable, and the story is Ron Gilbert’s best yet! If you’ve loved Maniac Mansion or Day of the Tentacle, you’re going to absolutely love this! And now it’s portable!  You have no excuse!

Full disclosure: This review is based on a Nintendo Switch review copy of  Thimbleweed Park given to HeyPoorPlayer by the publisher.