What do you get when you mix Plants vs. Zombies and Streets of Rage, and throw in a heaping helping of hound dogs? You get the oh-so-glorious The Last Friend, the brainchild of David Brevik (of Diablo fame). Combining tower defense strategy with a button-mashing brawler seems like an odd choice, but I’m here to tell you that it works. And it works well.

He’s Having a Ruff Day 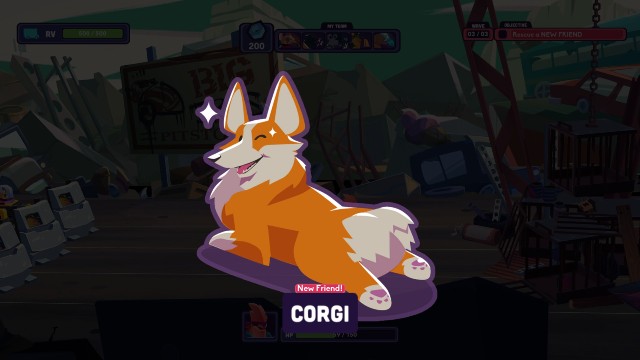 The Last Friend is set in a post-apocalyptic world full of chaos, mutants, and, most distressingly, dognappers. Enter Alpha, the human the player takes control of. Whilst traveling across the mutant-riddled wastelands, he happens upon said mutants in the midst of kidnapping a poor, defenseless doggo! Springing into action, Alpha charges into battle to save the helpless pupper. During this battle, Alpha discovers he can actually communicate with the li’l doggo, and his name is T. Juan. Joining forces, the two embark on a journey to figure out just what’s happening to all the lost dogs.

The story is charming, but it’s really the dialogue that shines through. While traversing the ruined, chaotic planet, you’ll come across a variety of enemies who are… not quite right in the head. While Alpha typically remains stony and stoic, the baddies you encounter are all too happy to rant and rave. It’s really quite entertaining, though I think my favorite is T. Juan’s constant snarking. There’s a lot of sass in such a little dog. While I can’t say that the game is particularly story-heavy, there’s more than enough to keep you engaged and wanting more. 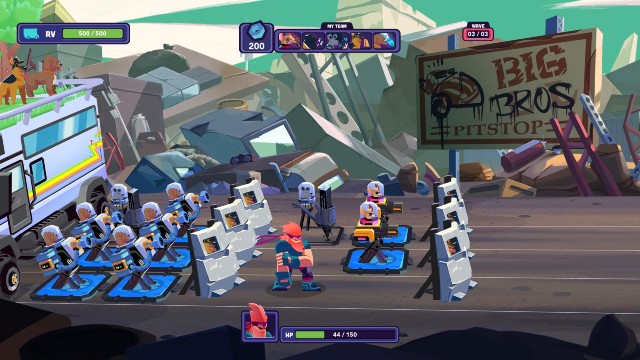 Where The Last Friend really shines is the gameplay. I’ll admit I was a little skeptical that the mashup of genres could be successfully pulled off, and I’m more than happy to admit that my fears were completely unjustified. Instead of being overwhelmingly hectic and disjointed, the gameplay is extremely polished and smooth. At the start of a typical enemy encounter, you’ll be given a short amount of time to set up the tower defense portion of the fight. There are three types of units that can be deployed: attack turrets, defensive walls/traps, and utility structures. Each unit has a resource cost that must be paid in order to place it on the field, known as scrap. The field is divided into lanes, which enemies and projectiles will travel along. The game begins with only three lanes, but more will be added as you progress. You’re given a small amount of scrap at the start of a battle, but you’ll need to collect more by placing extractors to dig for it and by defeating enemies. You can also gain additional scrap by giving up your setup time during each wave of enemies.

Once the setup time is over, you’ll have to work through a wave of enemies, and each stage has a set number of waves, indicated in the upper right corner of the screen. You’ll want to have as solid a setup as possible in order to weather the oncoming hordes of mutants, robots, and more. To protect your turrets (and the precious doggos manning (dogging?) them), you’ll need to do some brawling. Controlling Alpha, you can attack any incoming bodies through a series of light and heavy attacks, as well as special abilities that you’ll gain access to as you progress through the game. You typically have two main objectives: prevent your RV (located behind your turrets, and considered your home base) from being damaged or destroyed, and save a kidnapped pupper. Combat is definitely a balancing act – you’ll need to keep an eye on your turrets, available scrap, your health points, the health points of your RV, and the incoming enemies. There’s a delightfully frenzied, frantic pace to battle without it ever feeling overwhelming. 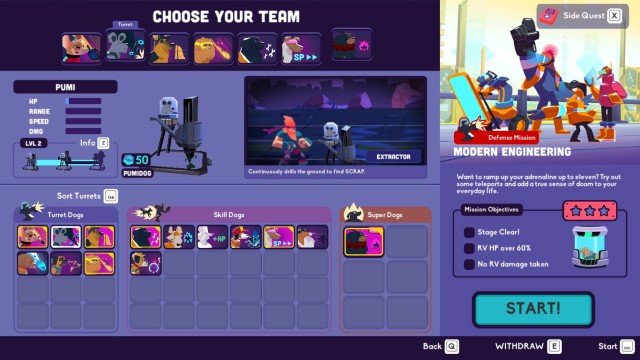 Combat in The Last Friend may be straightforward, but it’s far from simple. Each unit that can be placed is manned or controlled by a sweet, precious doggo, and each has its own unique characteristics. For example, T. Juan controls turrets that fire projectiles to damage enemies, the German Shepherd mans a barrier to protect against enemy attacks, the Barbet (which is a real dog, look it up, you won’t regret it) shoots water that slows down enemy movement, and the Cocker Spaniel lays a trap that temporarily immobilizes an enemy that steps into it. And those are just the turret dogs! There are actually three types of dogs in the game: Turret Dogs, Skill Dogs, and Super Dogs.

Turret Dogs are any dog that you can place on the field; some attack, some defend, some are traps, and others gather scrap. Skill Dogs do just what their namesake implies: they infer skills upon Alpha. Skill Dogs come in many flavors, such as my favorite, the Newfoundlad (Newfies!), which allows you to heal damaged units by standing on their space; the Corgi, which raises your attack power when your health is lower; and the Collie, which boosts your movement speed. Finally, there are Super Dogs, which allow Alpha to use a powerful command that can help shift the tides of battle, such as the Tibetan Mastiff (the biggest, fluffiest, goodest of bois!), which lets Alpha enter Beast Mode and deal increased attack damage. There are a couple dozen doggos to rescue throughout the game, each with their own unique abilities. At the start of every stage, you’ll need to choose a select few to take into the level with you. You’ll begin the game with the option to take 5 with you, and you’ll gain expansion slots as you progress. 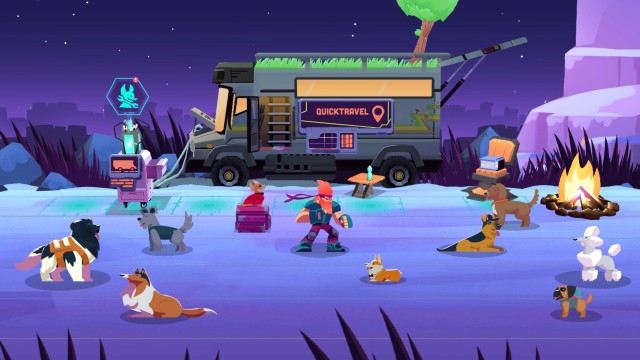 Each dog you rescue will join you permanently (though you may not always have access to them, depending on the level type, more on that later), and you can increase their abilities by visiting Lupe, a kindly old woman who will take the dog bones you collect from defeating enemies and clearing levels, and turn them into dog food that will level up the selected pooch. Each dog can be leveled up to level three, and requires a set number of dog bones to do so. You can also visit your dogs by making camp anytime you’re on the world map. You can run around and pet them, and as you level them up, you’ll discover you can understand them more and more. It’s a really nice little touch.

The three types of dogs can be further leveled up by leveling up your RV. Remember when I said it was your homebase of sorts? It’s where you’ll make camp, talk to and love on your doggos, and also where you can upgrade your RV itself. In order to upgrade your RV, you’ll need to earn stars by completing certain objectives in each stage. You can earn up to three stars by completing the listed objectives at the beginning of each level, which in turn can be spent to improve your RV. Doing so can increase the total hit points of your RV, the attack power of your turrets, and the amount of resources enemies drop, to name just a few.

A New Leash on Life 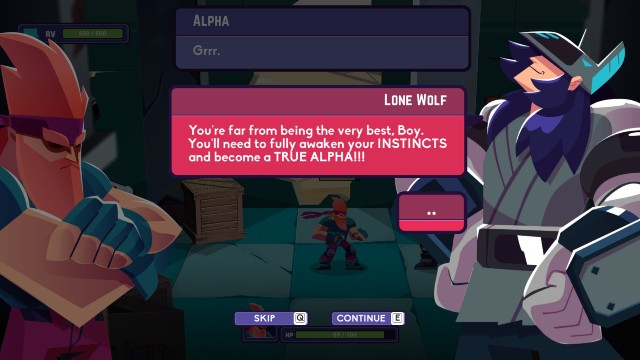 Tower defense games and brawlers both share a common fault: they tend to get repetitive, and fast. Thankfully, The Last Friend manages to sidestep this pitfall. There’s a variety of level types to play through as you move from area to area. You’ll have your typical combat levels, where you need to fight through waves of enemies to rescue a beautiful fur baby. But you’ll also encounter challenge levels, which will help Alpha level up and gain improved stats and new abilities. There are boss fights pitting you against a big baddie, with only Skill Dogs able to lend a helping paw, and more. There was never a time where I felt that gameplay was getting stale and mindless. The difficulty curve is also approaching perfection, increasing on a smooth, steady slope that never feels overwhelming.

Furry Up and Save Them Doggos! 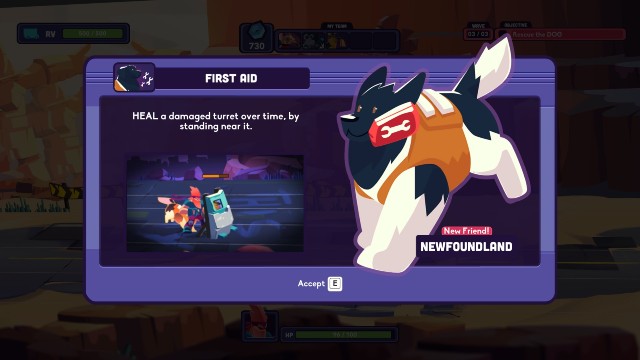 The Last Friend’s art style is utterly charming and adorable. I mean, you rarely can go wrong with fluffy fur babies being animated, but the folks at The Stonebot Studio and Ludus Games really hit it out of the park. Each dog is lovingly hand-drawn and just bursting at the seams with character. They’re so friggin’ cute that I spent more time than was probably reasonable at my camp just running around and petting them, again and again. And squealing to my husband whenever I rescued a new one and making him look at it. Soundtrack is solid, if not always particularly memorable, which is one of two extremely minor complaints I have against the game.

Absolutely Mutts About This Game

Honestly, I’m struggling, really struggling, to find faults with The Last Friend. If I had to be extremely nitpicky, just to find something wrong with the game, I’d say that the soundtrack being average and the early-game difficulty being just a tiny bit too easy are the only things I can think of. And that’s really after doing some deep digging. And I promise I’m not saying that just because a game about rescuing kidnapped dogs from psycho mutants and weirdos tugs at my heartstrings.

The Last Friend is truly a gem. Polished gameplay, tight controls, superb, charming art, and just that wow factor that makes you want to play for hours on end. It’s one of those games that I hesitate to call perfect, but honestly, I can find so few flaws, I’m awfully tempted to. I’m already counting down the days until it comes out on the Switch so I can download it and have it on the go as well. 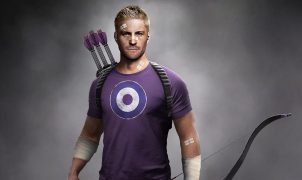 The End Is… Meh     It’s been over six months since the original release of Marvel’s Avengers, a game that HeyPoorPlayer has been covering extensively since its debut.…