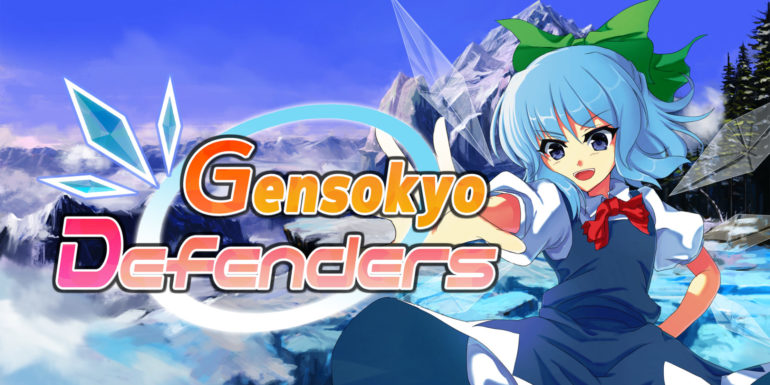 The fast-and-frantic bullet hell action of the Touhou series is something that’s earned it quite a bit of respect from plenty of people – myself included. However, when it comes to Touhou spin-offs… maybe not so much. The past two Touhou-branded offshoots that I’ve reviewed were, if I’m honest, not so good – consisting of a mediocre platformer and an incredibly unpolished fighting game – so I’ll admit that I was kind of hesitant going into Gensokyo Defenders. I figured that this was just going to be yet another disappointing experience – Touhou’s third strike, if you will. And thus, I braced myself for impact. But that impact never came.

Much to my surprise, Gensokyo Defenders wasn’t the letdown that I thought that it was going to be. Heck, I was even having fun with it! Sure, it’s rough around the edges. And no, it wasn’t going to become one of my all-time favorites. But that didn’t stop me from enjoying what was there – and I very much appreciate it for that. 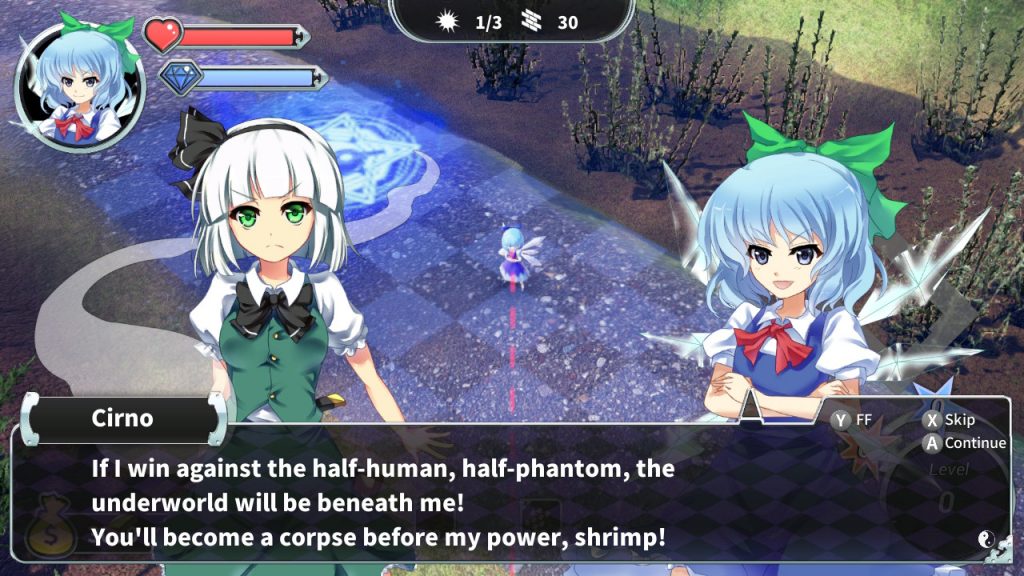 Tough talk from such a tiny fairy.

I’ll be frank with you – Gensokyo Defenders’ story is kind of a mess. I know, I know, it’s kind of a weird thing to say after I just got praising the game, but stick with me for a moment. The narrative itself isn’t actually that bad. Gensokyo Defenders follows the story of Cirno– an ice fairy and normally somewhat minor character – as she wanders Gensokyo in order to challenge its many residents to a new type of tactical games simply branded “war games”. And why does she do this? Simple; to prove that she can be the best at something. As a fairy, Cirno isn’t someone who can typically go toe-to-toe with the likes of people like Reimu and Remilia when it comes to activities like danmaku. However, because of the way war games work, she actually has a chance to prove herself as competent opponent deserving of respect from her peers – and that’s exactly what determined to do. It’s a basic story, but it works pretty well given how the game plays out.

So, where does that previously mentioned “kind of a mess” part come in? Well, with the actual writing. I’m not a complete Touhou newbie, but I’ll admit I’m far from knowing everything there is to know about the series. Because of that, I assumed that that was the reason why I was having a hard time following the story. However, the longer the game went on, the more that I realized that it wasn’t just me – something was wrong with the writing. I’m not sure if there was an issue with localization, or with the script itself, but something felt off. The story itself was fine, but the way in which it was being told came across as rushed and disjointed. To be fair, this isn’t a deal breaker. We’re talking about an indie game, and one that isn’t story-heavy on that – but that still doesn’t entirely excuse the fact that its writing is as confusing as it ultimately ends up being.

All’s Fae-r in Love and War 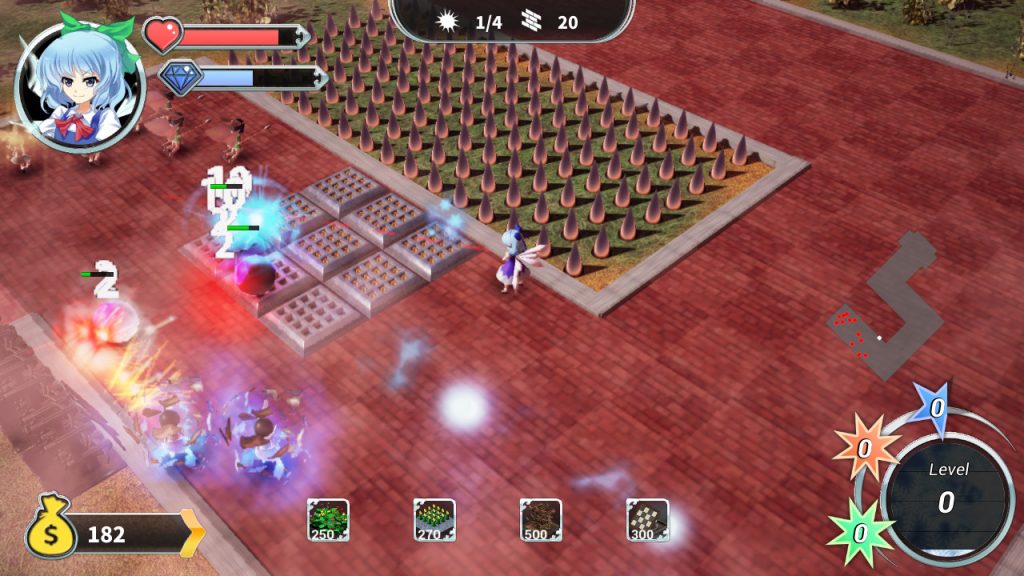 You’ll need to combine iron-clad defensive strategies with white-hot (or cold, maybe?) offensive maneuvers if you want to make it through each level!

As far as gameplay is concerned, Gensokyo Defenders is a fairly basic tower defense game, featuring the same goal for players as nearly all others within its respective genre – to stop wave after wave of enemies in their tracks as they march their way toward your base. Naturally, the most efficient way to do this is by building towers. In this sense, there isn’t all that much to say. While Gensokyo Defenders is somewhat lacking in the structures that it offers to the player in the beginning, it slowly grows over time, offering the player a nice selection by the time the end of the game rolls around. For the most part these are also fairly standard – featuring towers that fire volleys of arrows, poisonous mushrooms that lower defense, and traps that stun foes and stop them in their tracks – but are still varied enough to adapt to most any player’s play style; just keep in mind that you can only bring four at a time with you into each level!

Of course, being a Touhou game and all, Gensokyo Defenders isn’t just about setting up your towers and letting them go to work for you; the player also has an active role to play as well. Rather than simply acting as overseer, the player is also tasked with fighting down the hordes of incoming enemies themselves (with help from their towers, of course). Gensokyo Defenders offers a 15+ character roster for players to pick and choose from – a pretty good number for a game like this. And the best part? There’s a noticeable difference between all of them! Each of Gensokyo Defender’s characters comes with their own attack strength and speed, as well as three unique, and highly useful, special skills for players to make use of. Interested in stopping your opponents in their tracks? Take Reimu for a spin. Worried about dying? Mokou’s healing skills have got your back. Regardless of how you’re interested in tackling each levels, Gensokyo Defenders’ roster almost definitely has something that will end up working for you (yes, even melee characters) – an element that’s not only important with a game like this mechanically, but ends up making it a lot more fun as well. 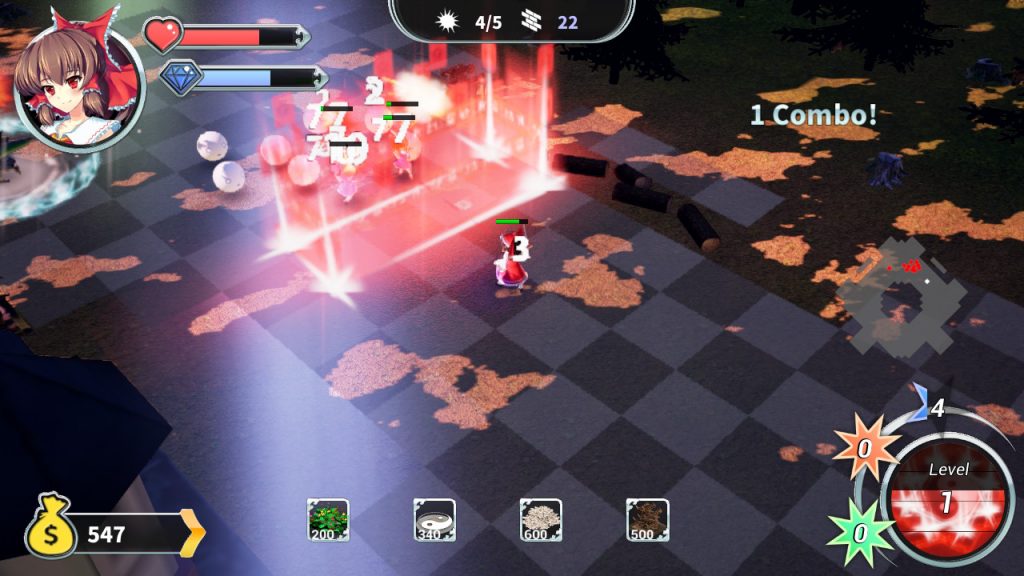 Each character has their own unique play style; find the one that suits you best!

The level design doesn’t fair quite as well, though. In contrast to Gensokyo Defenders’ pleasing selection of towers, traps, and characters, which differ from one another noticeably, you’re pretty much getting the same thing with each level. Now, I can’t fault the actual level design too much. Unless they’re really trying to push the boundaries of their genre, most tower defense games aren’t capable of crafting intricate levels by their very nature of being tower defense games. It’s just not something that can be done very easily (or very successfully) most of the time. What tower defense games can offer, however, is a variety of enemies – something which Gensokyo Defenders doesn’t fair quite so well with. There are only really five different enemies in the game and, although they do each have special variants (over doubling the number in total), they get stale pretty quickly. Each enemy unit does do its job nicely, so I suppose that you could say something about not messing with a successful formula, but I don’t think that a nice mixture of quality and quantity would hurt the game at all.

Tower defense games aren’t nearly as common as they once were, so it was nice to finally get to play one again after all of these years – even if it was a little on the basic side of things. Still, basic-ness aside, Gensokyo Defenders ended up being a good time. A fun mixture of tower defense gameplay with a little bit of arcade-like fighting ultimately ends up going a long way with Gensokyo Warriors, and I could think of plenty of worse things to play than this.

Full disclosure: This review is based on a copy of Gensokyo Defenders given to Hey Poor Player by the publisher.