Batwoman Season 3: Toxic Review: Save Mary to Save the Day 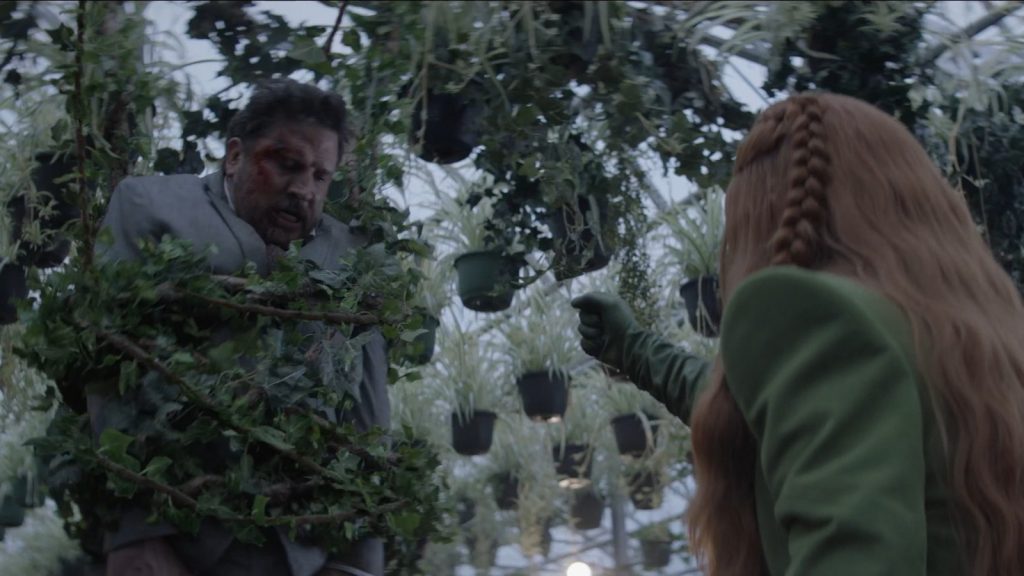 I’m pleased to say the latest episode of Batwoman, Toxic, is a far cry from the jumbled mess we saw last week. It’s much more focused, with a minimum of narrative jumps. Better yet, there’s no inexplicable emotional baggage that suddenly pops up out of nowhere. That said, if there’s one thing I’d complain about, it’s the lack of coherent writing for Renee Montoya. She can’t seem to decide if she loves Pam or fears her. But that aside, Toxic is a much better episode, and one that expands Batwoman Season 3 in some necessary ways.

All I can say for Mary is don’t meet your heroes. She’s still in Ivy fangirl mode early on. Her and Ivy are in a greenhouse strangling the CEO of Gotham United Healthcare with vines. Ivy coaches her with villainous advice, and Mary yells abuse at their victim before securing him to the ceiling. It’s all going really well, at least for Team Green, until Ivy’s nose starts bleeding again. Apparently, despite getting rejuvenated by Mary last week, ten years in a comatose state took its toll. Meaning she still needs the occasional boost from Mary when her body is weak.

Alice was very on point in this episode. Bereft of her bonding time with Mary, she goes to tell the Bat Team to go after her. She walks blithely into The Roundup and catches them up on what happened between Mary and Ivy last week, how Ivy psychically called to her all the way in Metropolis. Her plan is to use Ivy’s one weakness to beat her – Renee Montoya. The whole scheme is a win win for Alice, especially since it turns out Renee’s deal with her was a complete sham. Which means Alice is very much a wanted criminal again. This all leads to Alice and Ryan teaming up and surprising Montoya from the back seat of her car before dragging her unwillingly to The Roundup.

Help Me Drown Gotham’s Industry In Her Tears 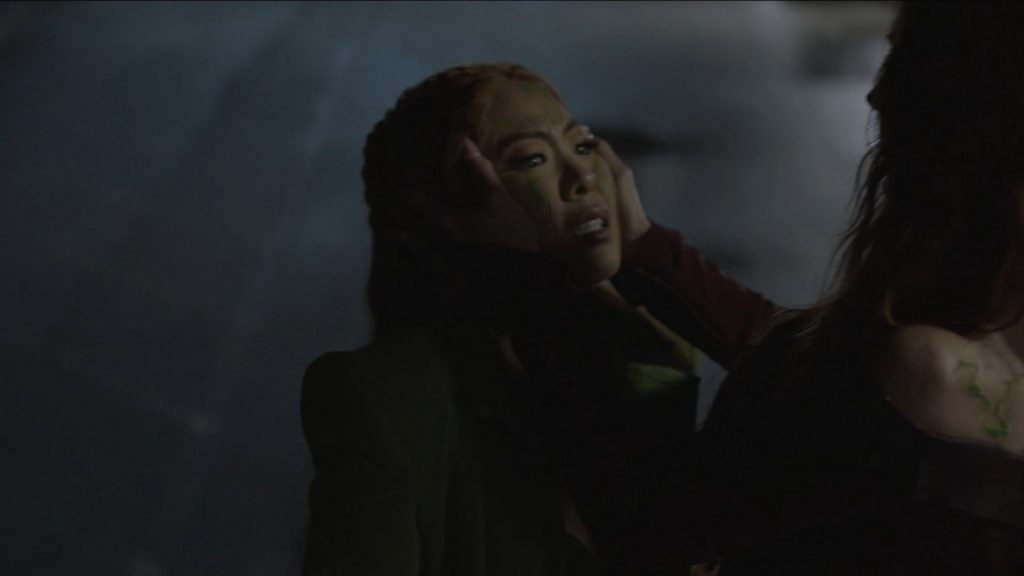 It’s a good thing the team is thinking constructively, cause Ivy is up to no good. We see her and Mary talking about mutual suffering. Ivy goes on about how chemical pollution from an industrial plant made certain her brother died as a young man. It’s clear that even though she’s on a harmful path of vengeance, Ivy does have legitimate reasons to resent the harm being done to the planet. The problem is her complete focus on those goals means a lot of people get hurt in the process. Which brings us to her latest passion project – destroying the Gotham Dam and flooding Gotham’s industrial district. Mary is horrified by the idea, warning it will likely kill thousands of innocents. Ivy seems okay about Mary not helping her out, but then forcefully drains so much energy from Mary that she falls to the ground comatose.

Back to the Bat Team at the lesbian bar. Montoya is being stubborn, saying that betraying Pamela was the worst thing she’s ever done, and she won’t help them find her. Alice, amazing nutjob that she is, threatens to lemon zest the info out of her. Ryan is also being super awkward around Sophie after their surprise kiss last week. Luckily someone breaks the tension by using the Bat Signal, so Ryan goes out in her suit to find out who it is.

My Son And I Have An Arrangement 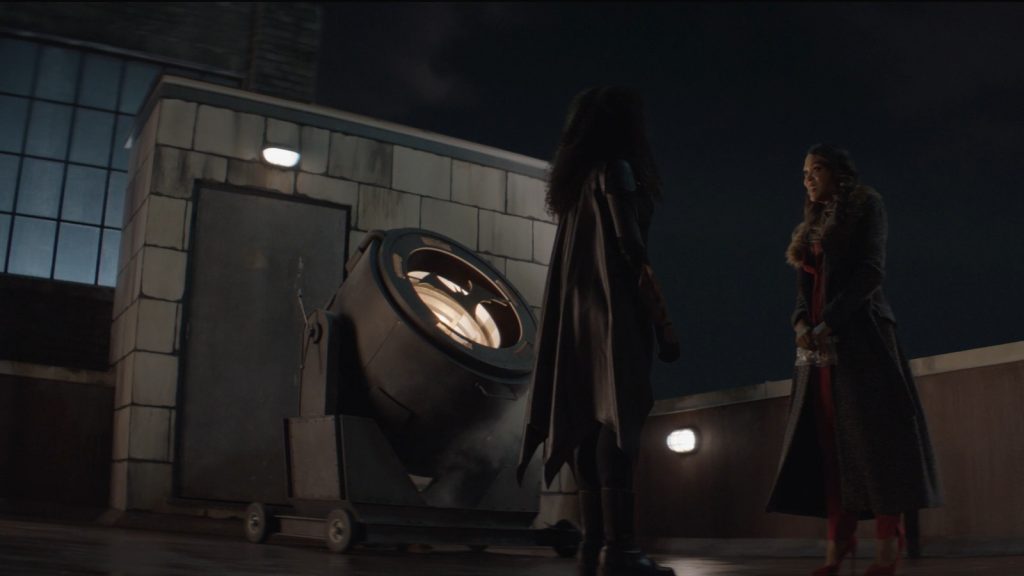 Turns out, that person is none other than Ryan’s devious mother, Jada Jett. She wants her boy back in her custody, saying she has the Joker’s hand buzzer. Jada wants to fix him herself, but Ryan warns that if he wakes up first, Jada will be his first target. Jada says they have an understanding, but Ryan counters saying he’ll just kill all her employees. Jada is finally convinced to hand the buzzer over, but warns Batwoman she only has until midnight to fix him. Not sure why the arbitrary deadline, since her whole goal is supposedly fixing her son. But nevertheless, she’s adamant about it, and Batwoman is suddenly on the clock.

Sophie and Alice do an amazing bad cop, crazy cop routine with Montoya that goes nowhere. Then Luke asks Sophie about Ryan’s strange behavior, though she doesn’t clue him in. They contact Ryan, and tell her that Mary was found unconscious and is being taken to Gotham General. And then my brain exploded when Batwoman asked for Alice’s help. Mind you, Alice has been drinking free alcoholic drinks at the bar the entire episode prior to that point. But there is a reason she needs someone else’s help, and a reason she doesn’t ask someone much more sane. She doesn’t want to face her newfound emotions about Sophie, and she needs someone else to drive the Batmobile.

You And I Are the Same, Batty 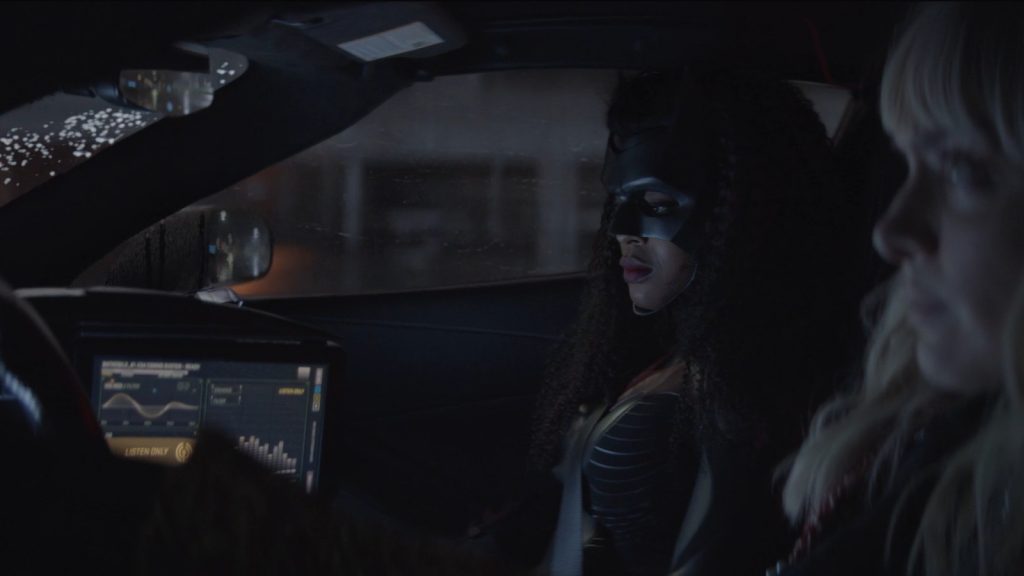 So yes, having a drunk criminal drive the Batmobile probably isn’t the best idea, but it shows Batwoman’s desperation. And of course, the first thing crazypants does is play with the missiles. Luckily Ryan manages to convince her to instead settle for listening to Sophie interrogate Montoya remotely. Which reveals that Sophie has feelings for Ryan. Alice then compares herself to Batwoman, saying they both hide their feelings for fear of screwing everything up. It’s a nice moment, right before the action sequence.

They come up on the ambulance, and Batwoman tries to yell at them to pull over. They refuse, so Alice floors it and gets ahead of the ambulance. Ryan opens the roof and leaps onto the front of the vehicle, and tries to convince them again to let Mary go. Again they refuse, so she makes her way to the back and opens the doors before they finally relent. Just as Ryan and Alice are looking over a comatose Mary on a stretcher, Alice reveals that Mary accidentally killed a man last week. And she suggests that if Mary learned about it once she’s free from Ivy’s influence, it might break her.

Back at the bar, Montoya hears Mary’s symptoms, and explains it’s due to sporeling transference. Mary is basically a battery for Ivy, and she’s been badly drained. Meaning Ivy is now more powerful than ever. Which isn’t good, since even low energy Ivy nearly killed the entire team last week. Ryan realizes Ivy is after the dam again, but Montoya warns they have no chance against full power Ivy. She says the only one that can stop her is Mary. As this happens, we get a glimpse of her power. Back at the dam, Ivy summons a blanket of vines to choke the dam and kills a worker in her way as everything starts shaking.

Mary wakes up, and doesn’t want to believe anything Ryan or the Bat Team says. She can’t admit she’s in a toxic, co-dependent relationship with Ivy. Then she sees Alice, which shocks her, but still refuses to listen. She says they’re all bad friends, and Ivy is her only real one. But Ryan finally finds a way to break through, painfully – she tells Mary she killed a man last week. Finally Mary listens to sense, and they concoct a desperate scheme. Mary will drink all of Montoya’s pheromone blocker. Then, when Ivy drains her, that will get into her system and weaken her. As a side bonus, it also might bring Mary back to normal, assuming she’s not killed by being drained too thoroughly.

This City Is Worth Saving 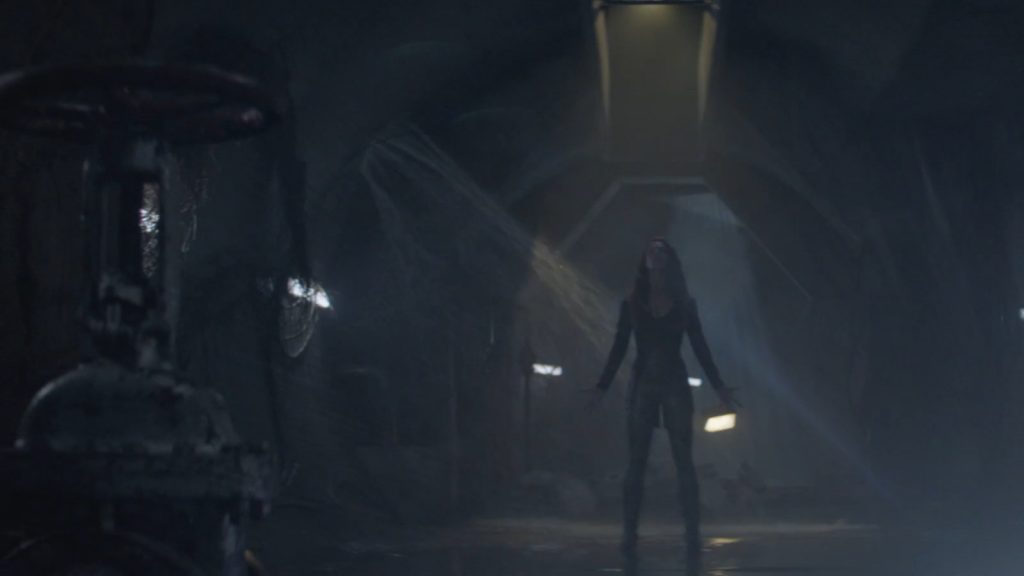 Ivy is expending too much energy, so she’s eager when Mary appears. She starts draining her, and Mary barely manages to break free before it’s too much. Then as Ivy starts stumbling, Batwoman appears and the fight begins. As that happens, Batwing attends to the turbines and starts cutting the vines free before he gets snagged. He’s being crushed to death and his PTSD is spiking when he suddenly reaches a meditative state. He finally works through his baggage from getting shot and finds the courage to keep fighting, despite his fear. He deals with the vines, Batwoman beats Ivy’s ass, and the day is saved.

Back at home, Mary wakes again, and finally seems to be in her right mind, despite still sporting orange hair. Meanwhile we see Montoya made a deal with the team. She gets Ivy, but they have to leave Gotham. Ivy’s not happy about Renee stopping her again, but since they’re in a plane, she doesn’t have many options. Their destination is none other than Coryana. And while that might be a fun couples retreat, I see it much more likely Ivy becomes a verdant goddess there and Renee gets sacrificed. But I suppose we’ll see in time. Lastly, Jada makes good on her threat. Since Batwoman didn’t give her back Marquis in time, she reveals to the entire city that Batwoman’s responsible for the criminal weapons getting loose. She’s turning the entire city against her, right before we see water from the damaged dam flood into where Marquis is lying comatose. One sole drip of water hits his forehead, and the maniac opens his eyes.

Like I sad at the start, Toxic was a much better episode of Batwoman. I’m hopeful the show stays on this positive track for the rest of the season. Either way, tune into HPP for our coverage of the next episode. 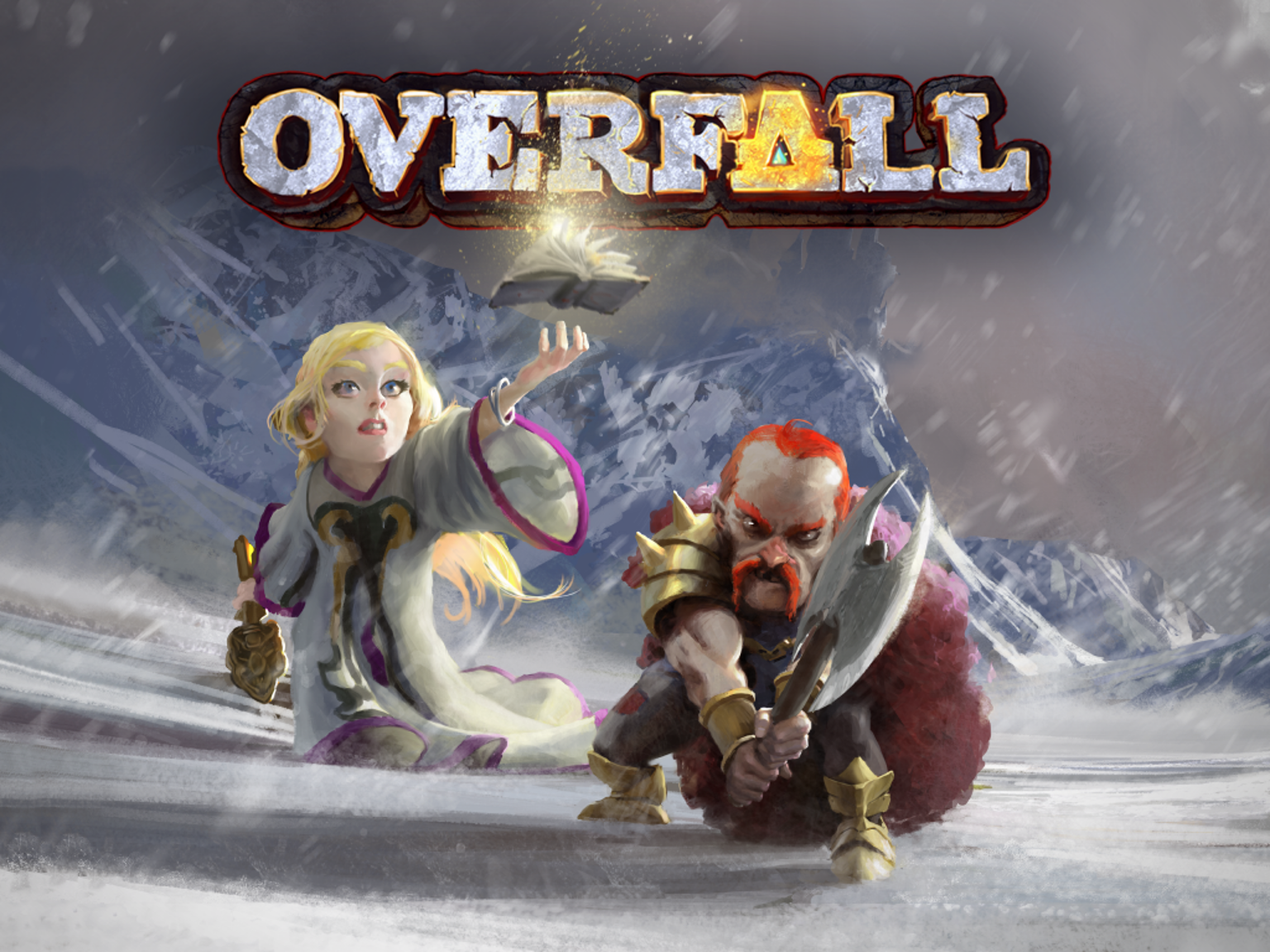