Death!? I Didn’t Ask For Death

When death is of no consequence and all you need is a good night’s rest, a swig of water, and a hand full of berries to bounce back from your express trip to Hades, Immortality exists in a sense in Developer Nine Dots Studio’s new open-world RPG Outward. While the game may not grant players an in-game death experience, it will, however, drain them of their souls and patience, and make them a more proficient adventurer. Refreshing, time-consuming, fun, and just downright soul-crushing at times, Outward is a fresh take on the survival game trope.

Off To A Rough Start 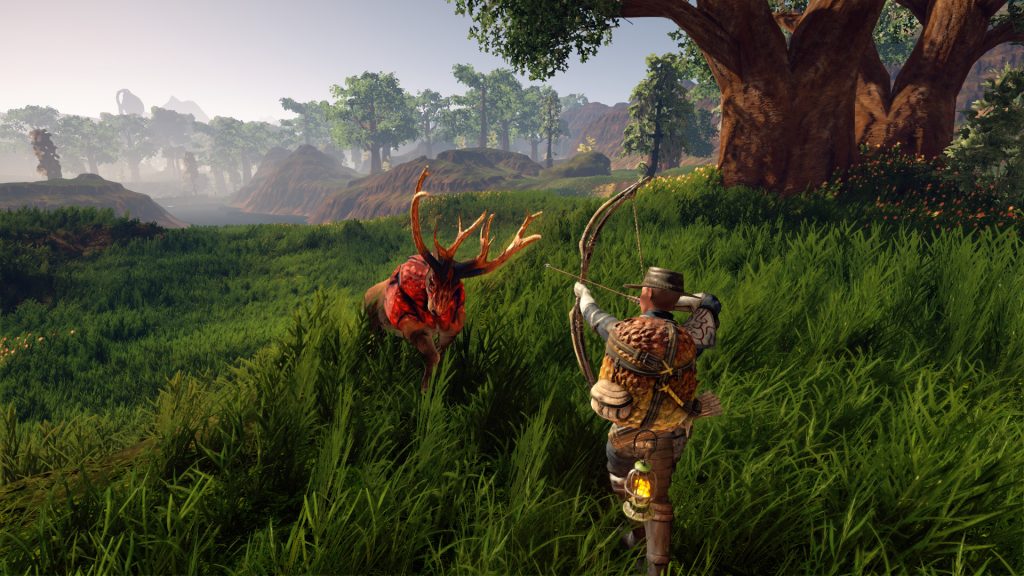 In most RPGs, you assume the role of “the chosen one,” or someone destined to save the world. However, Outward does away with this familiar trope. You start your adventure washed ashore in your homeland, and after staggering into a nearby camp, you awaken in your home. Things aren’t exactly pleasant when you come outside, though. A group of angry townsfolk is impatiently waiting at your door, you owe a blood debt, and these people want their money. After completing a few menial tasks (collecting essential survival items to be allowed through the gates), your journey begins. And oh, boy is it a journey.

Outward’s entire structure is centered around exploration, traveling the unforgiving wilderness, and grinding your way through the game’s four distinct regions. Risk lurks around every corner, and you’ll quickly come to understand that preparedness is the first rule of the game. The lack of quest arrows, fast travel options, or a mount to ease your travels makes your journey long and dangerous. Falling victim to a random bandit can cause you to wake up in their encampment, only to discover you’re now stuck on the other side of the map. The game does zero hand-holding, and the absence of visible waypoints and the inability to fast-travel comes together to encourage well-planned exploration. And honestly, that’s what makes Outward extremely entertaining. You can’t just hit the ground running without a plan. You have to make sure you have the proper provisions, as even wearing soaking wet clothing plays a role in how your character will persevere throughout their perilous journey, as merely catching a nasty cold can lower particular stats. Granted, just bumbling about can have its benefits, too, as I found myself blindly stumbling into loads of caves, lairs, and miscellaneous dungeons which lead to better crafting materials.

Even battling an empty stomach can bring you to your knees in Outward. On several occasions, my character went unconscious because I forgot to make him eat. Even though food is plentiful, I would get so carried away exploring the game’s world or battling bandits that it’d completely slip my mind and I’d find myself face down in the dirt.

Not unlike FromSoftware’s Dark Souls series, in the beginning, Outward puts players at a real disadvantage thanks to its utterly unforgiving nature (Nine Dots Studios doesn’t care about your feelings), but despite the game’s similar level of difficulty, it still manages to feel different in its own right.

We Won’t Abide By Your Hit Boxes 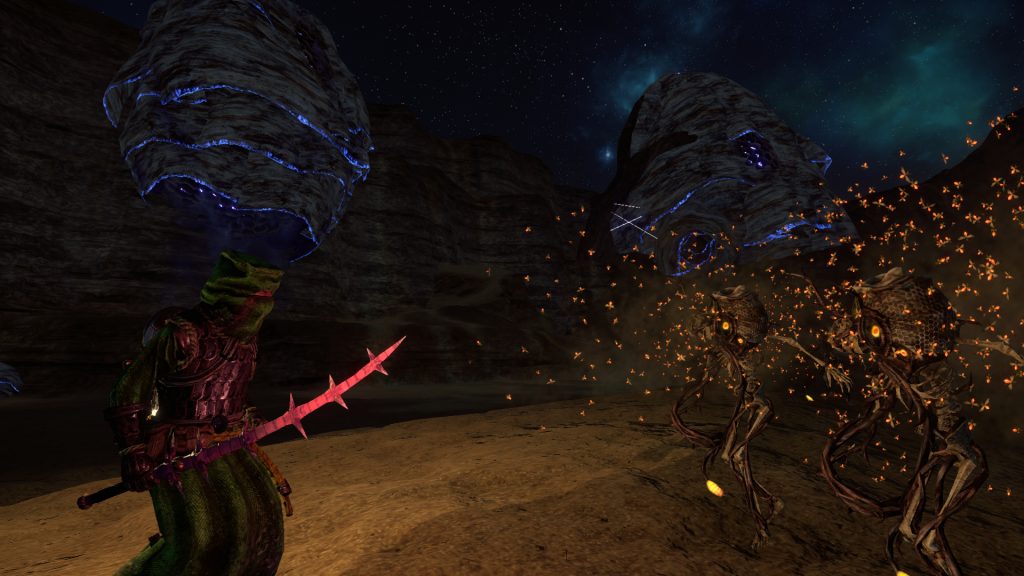 Death comes hard and fast in Outward, so keep your eyes peeled and your shiny sword ready.

Initially, Outward’s combat was a severe pain in my butt. In the beginning, it felt like I had no hope of ever defeating any enemy. Even after learning the ropes it didn’t feel like anything changed. The excessive amount of damage done by enemies in even the earliest stages of the game caused my patience to wear thin. Hit-boxes we’re just as bad. Attacks that looked like they should miss smacked me square in the face. While particular skills did present a certain level of flare and aiming towards a build was nice, combat just got to the point that all enemies could handle all enemies by taking the same defensive approach. In all honesty, you don’t need to perform Dark Souls-caliber tumbles and dodges to make it far in this game. The key to success is stamina management, careful strafing, and sometimes a little luck (or in my case a colossal sword). Most of my mission was completed because I forced enemies to fight among themselves while I scrambled around for dear life. Stamina was the biggest gripe I had, after a few swings of my weapon I’d be utterly drained, causing me to wait forever for it to build back up just so that I could unleash a single attack.

The magic system was one of the best things about combat in Outward. Remembering runic sequences required for casting spells and making sure I had holy boons or runic lexicons to channel my magical abilities injected some extra fun into the experience. Even though some of the spells that I learned didn’t quite mesh with the character I was using, I honestly didn’t even care because I was having so much fun. Trying to utilize these abilities during combat made for a pretty wild time, but the feeling of setting your enemies ablaze, or blasting them with an overpowered lighting spell was an oddly satisfying feeling. With its complex spell-casting system that genuinely rewards practice and preparation, Outward definitely offers a new sensation – something all RPG’s should aim to do.

However, with its floaty combat and wonky hitboxes, Outward‘s battles can be frustrating at times, but the complex and overall enjoyable runic system make up for the lack of focused fighting. 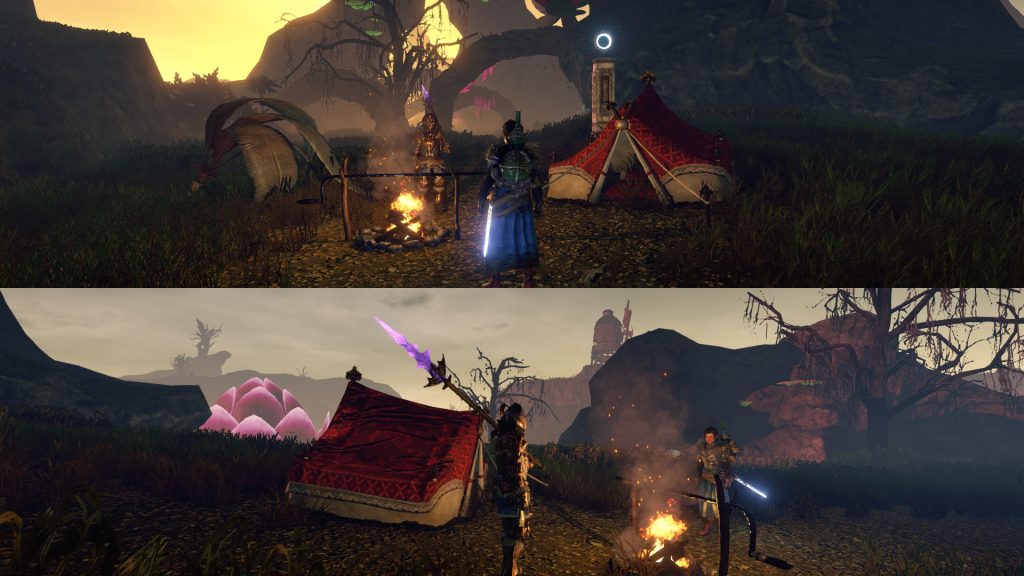 Crafting is essnetial. Good thing my mother taught me how to knit and sew.

Food can be found pretty plentifully in Outward, and at times you may even question if crafting or cooking is necessary. That is until you eat a random piece of raw meat or uncooked fish and now you can’t keep anything down. Rations, campfires, food and even potions can all be crafted or found as you make your way to your next destination. Some foods also offer some sparse benefits, and you could even learn a new recipe or two. Sometimes I was limited to what I could scavenge, mainly because I had more important things to spend money on (I’m cheap. Sue me). Food wasn’t the only thing that made crafting fun. Crafting weapons, armor, traps, and potions could cause a lot to go in your favor. Healing over time and regenerating mana made fights easier. I often carried around too many materials just in the off chance I could craft something useful.

A lack of sleep is certainly something you won’t have to struggle with during your adventures. I spent so much time sleeping because I ran out of healing tonics that you would’ve sworn I was preparing for winter. There was never a moment I didn’t sleep. I slept after battles won and battles lost, whenever it would turn night (which is pitch black and a nightmare to navigate, for the record), or when a quest required me to wait a day or two. The one action I did more than walking or swinging my mighty blade was tearing down my tent. One thing’s for sure; my character never suffered from sleep deprivation as the ancient technique of the sleeping man was mastered by the time my ascension into the land of counting sheep was complete.

Split It Right Down The Middle 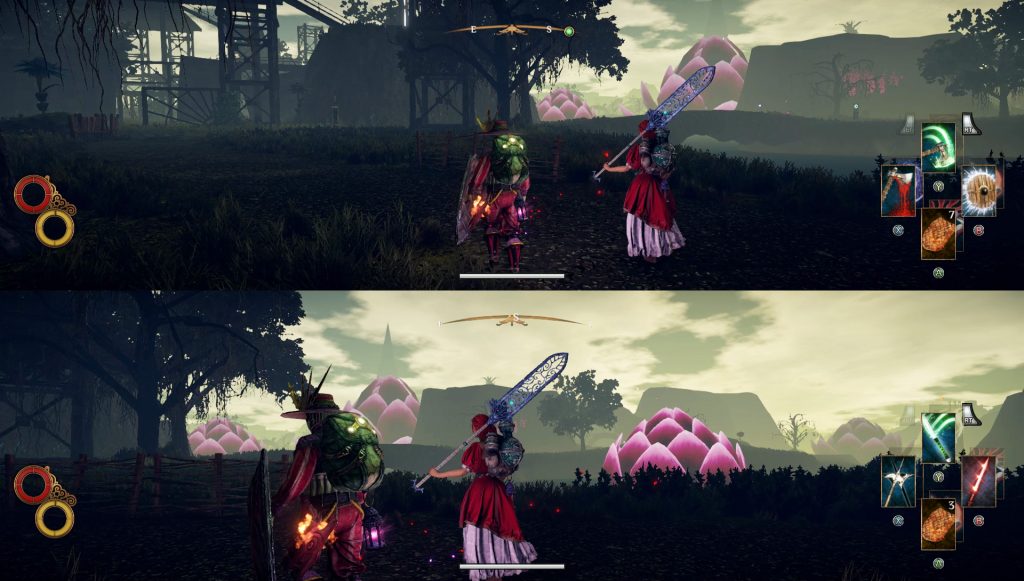 One of the more unique features of Outward is its split-screen cooperative play feature which can be experienced both online or locally. Who doesn’t enjoy an adventure with a friend? Being able to watch the action play out from another perspective took me back to the good ole days of split-screen gameplay (Goldeneye 64 will forever be my favorite). I won’t lie; having an extra adventurer helping you through the perils of the floaty and sometimes inaccurate combat is a real help – especially early on in Outward. While co-op does present a harder challenge by scaling the enemies to compensate for two players, tag-teaming these fights with a proper strategy makes things worlds more accessible. I managed to get a pretty powerful mage to help me out, and they made a boss battle with a fearsome manticore much easier. Exploring the wilds of Outward with another player does make the game less of an uphill battle, and that can be a good or bad thing depending on how you look at it. When playing with another player, communication isn’t essential, especially since you pretty much see everything that’s happening on the other player’s screen. However, while co-op play didn’t require a ton of strategizing among teammates, it was a lot of fun watching enemies struggle with who they should focus their attacks on while you’re pelting the beasts and baddies with spells, arrows or whatever weapons your party is packing.

The End Of The Pilgrim Road

Having experienced tireless hours, moments of despair and a pretty rough start, I finally met the challenge that is Outward. The game’s wonky melee combat can be frustrating, and a lack of clear waypoints and no means of fast travel or mounts to ease your journey can make navigating the world tedious at times. Add to that the many times I found myself waking up naked in an enemy stronghold, forced to fight for my gear, moments like these were often more than I could bear.

Thankfully, with patience, perseverance, and the help of some ridiculously overpowered magic spells, my sense of adventure was revitalized, and I began to understand and appreciate what makes Outward stand out from other survival titles. As stated earlier, the game can be a challenge, to say the least. However, it manages to set itself apart from its contemporaries by smartly incorporating compelling role-playing game elements while still keeping itself rooted within the bounds of its established genre. With its unique spell casting system, the welcome inclusion of split-screen co-op, and an unforgiving yet rewarding campaign, Nine Dots Studio’s Outward serves as a revitalizing shot to the arm that delivers a much-needed medication to help soothe that bothersome itch for a different take on the RPG and survival genres.

Full disclosure: A review copy of the game was provided by PR.