Steal your life away 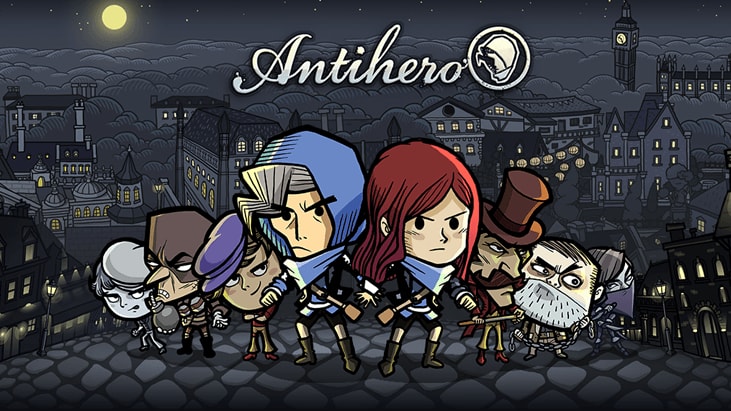 Tactical turn-based strategy RPG-type things are a dime a dozen on Steam. A lot of that comes from Japanese anime games, and a lot of it comes from indie projects that may or may not ever escape the purgatorial “Early Access” zone. It’s a space like that of roguelikes at the moment; saturated. What I’m trying to say here is that it’s saturated.

Luckily, as the real answer to that classic Killers song is that we are both humans AND dancers, it’s still possible for something to be really unique while not feeling unnatural. In comes Antihero, a stealthy tactics game all about being a  thief in Victorian England. You start up a guild of rogues, dispatch urchins to do your dirty work, and work to tear down the aristocracy from the ground up. It’s one part board game, one part brainwork, one part RPG and all parts viciously fun. Welcome to Antihero.

Antihero puts you in control of one of a couple different thieves. First it’s Lightfinger, veteran stealer of coin and stabber of back. Pretty soon, urchin Emma joins the ranks, and most levels will switch off which of the two characters you control. Each level of the game is its own challenge, its own board, and its own scenario. In each one you start out with just your Master Thief, and have to expand outward in a new chunk of territory. The city of London doesn’t know you, but it already doesn’t like you. 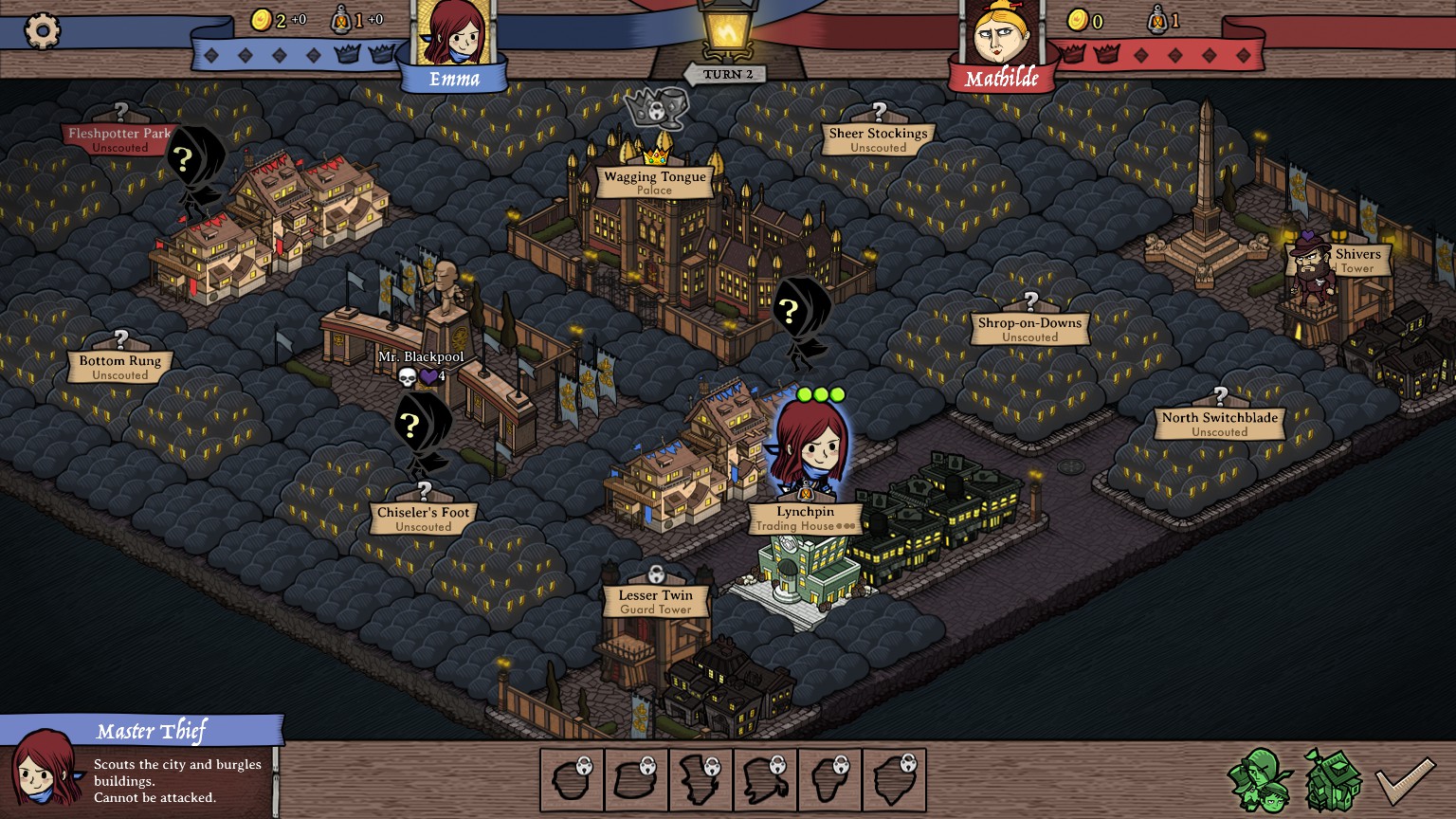 So here’s how things play out, basically. Your Master Thief can fight if you upgrade them that way through the stage, but is a scout and thief, first and foremost. The whole map is a mess of tiles of fog at the outset, and only the keen eye of this scouting expert can clear that fog away to allow expansion. This means early turns include a lot of peering down streets, stealing coin from houses to reveal what their city blocks have to offer, and then choosing where to place your first couple upgrades. Almost universally, you want to put your first choice into unlocking urchins, who will be your main source of asset generation as you progress. That’s right; there’s resource management in Antihero, and in blends in nicely.

Urchins get placed in all sorts of notable buildings to generate assets. Tossing one or more in a bank or church will gain gold. Put one in a trading house (which is pretty essential early on) and you’ll get a steady stream of the lanterns you need to spend on that handy dandy upgrade tree. Place three urchins in a given location, and you’ll get double the assets, too. You’ll need them, too. You’re not alone, after all.

Each stage will pit you against a rival thief. First it’s another hood-wearing Assassin’s Creed-type like yourself. Then it’s a wealthy megalomaniac who steals for thrills. It goes on. In each stage, your basic goal is to be a better thief than the other thief. This means delivering blackmail, taking out assassination targets, stealing a lot of stuff, and even getting dirt on people. There’s some really cool flexibility here. Some levels will present specific challenges. One, a couple hours in, gave me the objective of two of my victories in the level coming from stealing treasure from a giant palace that loomed, dominating the center of the map. Figuring out what combination of dastardly successes will win the day is key to victory over your rivals.

So,  there’s urchins. We know how those little scamps work. There’s also gangs, your main source of muscle. You hire a mustachioed gang leader, and can then hire individual thugs to add to his ranks, giving him an additional heart for  each iron-jawed lad to stomp his way in. You can also station thugs individually around the map as guards, although they’ll only hang around for a couple turns. Similarly timing-based, the saboteur is a really vital part of the game’s flow when you know when to pay and employ him. He’s your man when it comes to setting traps, which you’ll want to do on any businesses giving you resources you know you couldn’t do without. There’s an occasional roaming character that will come and steal your hard-working urchins away from you; enemy gangs can do the same, too. You must keep your boys safe, at all costs.

So, here’s the thing. Antihero is honestly just a ton of fun. All those moving parts I’ve described seem daunting at first, and honestly, I wasn’t sure if it might be overcomplicating itself. But in motion, the game really lives up well to its own advertisements as a fast-paced strategy game. Over the course of a couple wins and a couple losses, I got a feel for how I should be setting myself up to attain more gold early on, and what I should and shouldn’t plan ahead for. There’s a strong “don’t put all your eggs in one basket” thread in this game. You kind of have to spread your eggs all across the board in order to win. 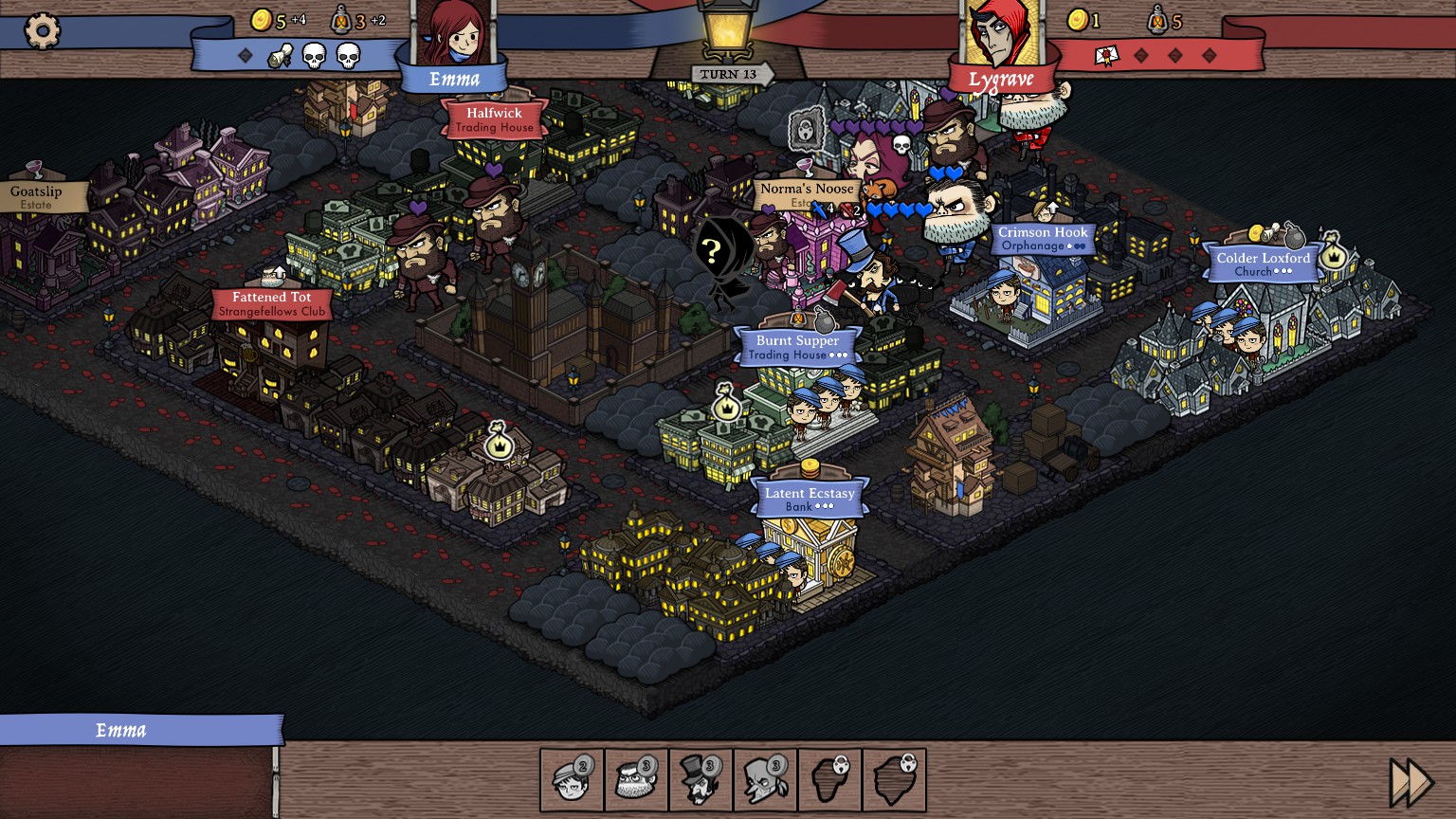 Antihero also boasts a PvP mode, where players can outwit each other to take down marks and become the best. As far as the main campaign goes, I would actually recommend dabbling in hard mode early on if you feel like you’re getting the game’s groove easily. Don’t worry, you can change difficulty each time you start a level. I found that I was able to outthink the CPU a bit easier than I might have expected here and there. There was the occasional occurrence where my opponent would ignore an open target, be it thievery or murder, and I would notice and win the match easily because of its mistake. This isn’t a consistent problem at all, though. You’ll find yourself challenged enough from the first chapter to the last.

Antihero is great fun. Each level and scenario really feels like it’s own beast. It’s visual style is fantastic, and it’s challenge ramps up at a decent pace. It’s fast-paced, but each level is lengthy and doesn’t get boring. At any time, you could lose a huge chunk of what you’ve built, and watch in despair as the tides are suddenly turned. That chance keeps the game interesting nonstop. Antihero is a game that requires a lot of thought at all times, but is also one you can play while watching Netflix in the background if you so choose. That’s not a strike against its staying power. Rather, it’s a testament to how easily the priorities and issues that need to be kept straight will stick in your head after a while. Steal on, little urchins.