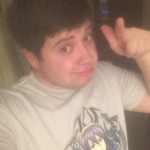 Starting out with nothing more than a Game Boy and a copy of Donkey Kong Land, Kenny has happily been gaming for almost his entire life. Easily-excitable and a bit on the chatty side, Kenny has always been eager to share gaming-related thoughts, opinions, and news with others and has been doing so on Hey Poor Player since 2014 and has previously worked with both PKMNcast and SCATcast. Although his taste in gaming spreads across a wide number of companies and consoles, Kenny holds a particular fondness for Nintendo handheld consoles. He is also very proud of his amiibo collection. You can also find him on Twitter @SuperBayleef talking about video games and general nonsense. Some of his favorite games include Tetris Attack, Pokémon Black Version 2, The World Ends With You, Kingdom Hearts: Dream Drop Distance, Yo-kai Watch, Donkey Kong Country 2, Super Smash Bros. for Nintendo 3DS, Kirby's Dreamland 3, Mega Man X, and Castlevania: Order of Ecclesia (among many others).

An amusing and artistic adventure, but one cycle was enough I'm sure that most of you out there who have been playing video games for a while have heard…