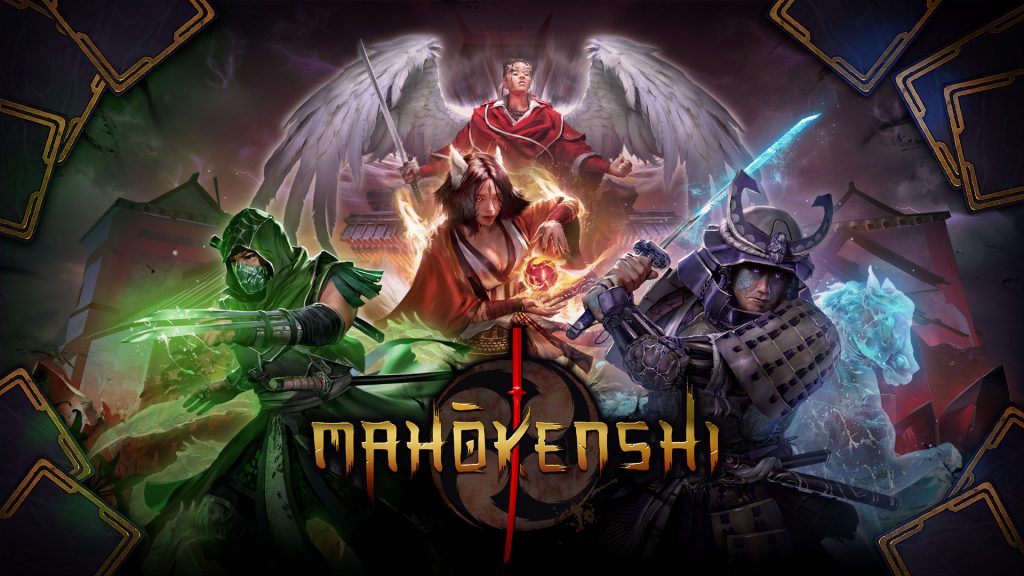 Deja vu is a perplexing sensation that I’m more than a little familiar with. Not just in video games, mind you, but the entire fabric of my life. That nagging sensation you’ve done something before that makes each moment supercharged with mystery and despair. After all, we all like to think this life is the only one, so why would we suddenly get double vision? Thankfully, deja vu is a lot less disturbing in the video game arena, and it also tends to be less pronounced. 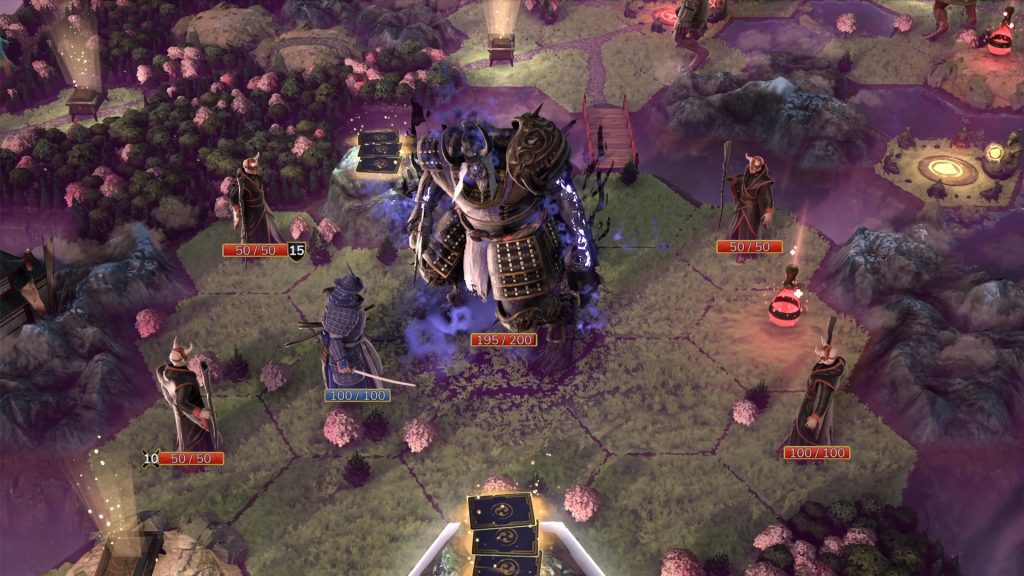 After all, plenty of games resemble each other, both intentionally and by pure accident. Take today’s review, Mahokenshi. It’s a deckbuilder steeped in Japanese mythology with lite randomized elements and plenty of challenge. That instantly reminded me of another title I reviewed, Castle Morihisa. That game ultimately failed to impress me, mainly due to a frustrating lack of pacing and balance. This Mahokenshi review will establish whether this deja vu adventure suffered from the same fate, or found ways to differentiate itself for the better. 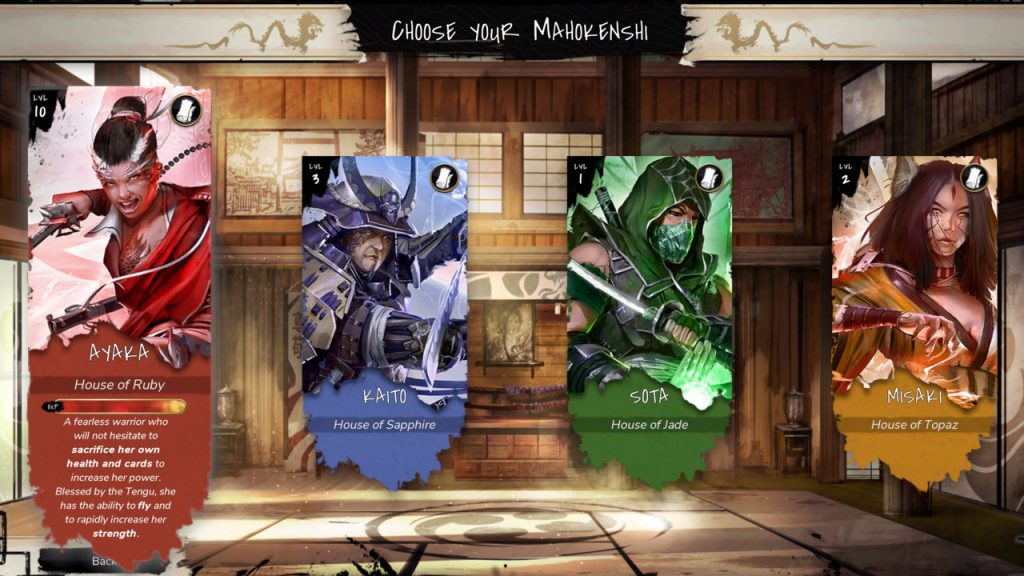 Developed by Game Source Studio and published by Iceberg Interactive, Mahokenshi is a tale of fierce samurai. They all live on the Celestial Islands and defend the floating landmass from demonic incursions. If you’re at all familiar with Japanese myths, you’ll know they have a ton of monsters to contend with, from Yokai to brutal Oni and even spectral Yurei. In this game, there are 4 Great Houses, clans of samurai who battle against these horrifying monsters. Better yet, each House is allied with a mystical entity that grants them magical might. Ruby soars with the Tengu; Sapphire has a mighty defense thanks to the Kappa; Jade follows the poisonous Ogumo; and Topaz wields illusion courtesy of Kitsune. 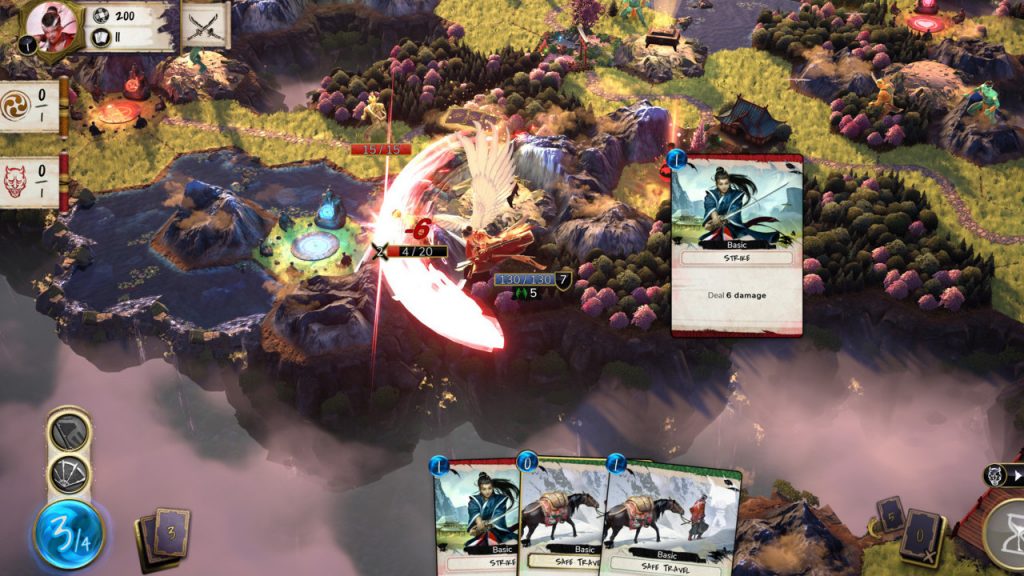 Each House has a distinctive playstyle that you will learn to embrace. Ruby likes to spend health for powerful benefits, and since they’re allied with Tengu, they have a tendency to sprout wings and fly all over. Sapphire is defense-oriented, though also able to unleash devastating area-of-effect attacks. Jade employs stealth and poison to assassinate their foes (honestly, more of a ninja than a samurai). Lastly, Topaz is sneaky and uses powerful magic to snipe enemies from afar. There’s no right or wrong House, though some missions are easier to finish with one than another. For example, one early mission requires you to beat a certain amount of foes within a time limit. I struggled and struggled to do so with the slow-moving Sapphire tank but found outstanding success with the high-flying Ruby samurai. 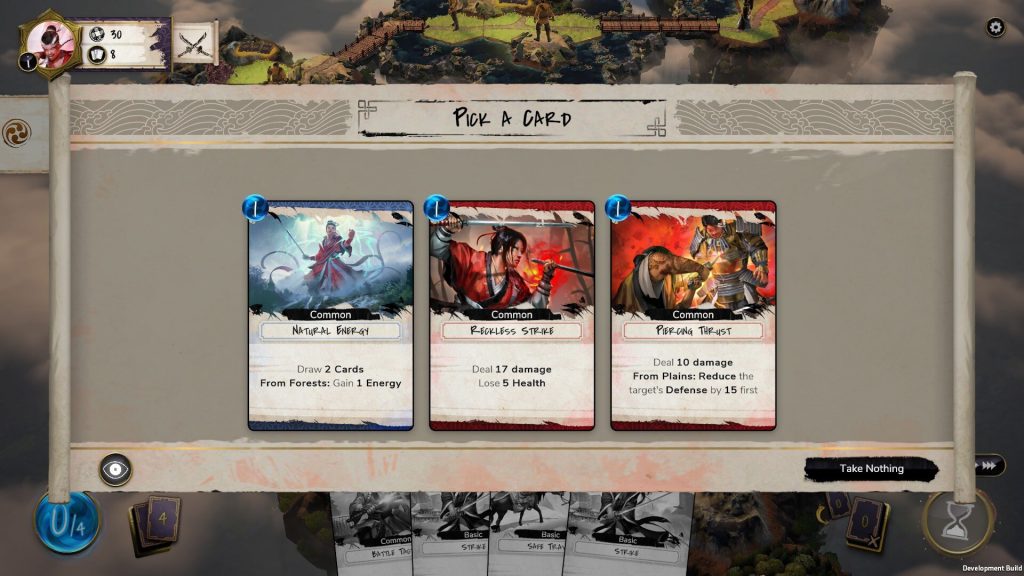 As you level up each House, you’ll unlock more cards, equipment, and other goodies. Cards are most important since they are used to do everything in the game. Equipment is handy since you can pick one piece and take it with you on each mission. The other assorted items usually appear in specific locations on the map, such as Castles and Villages. It’s also worth noting that no matter what House you select, the random piles of cards you’ll find all over each map seem to feature cards from every one you’ve unlocked. At first, I thought I was confused, but it seems like many of the cards you unlock are accessible to every samurai. 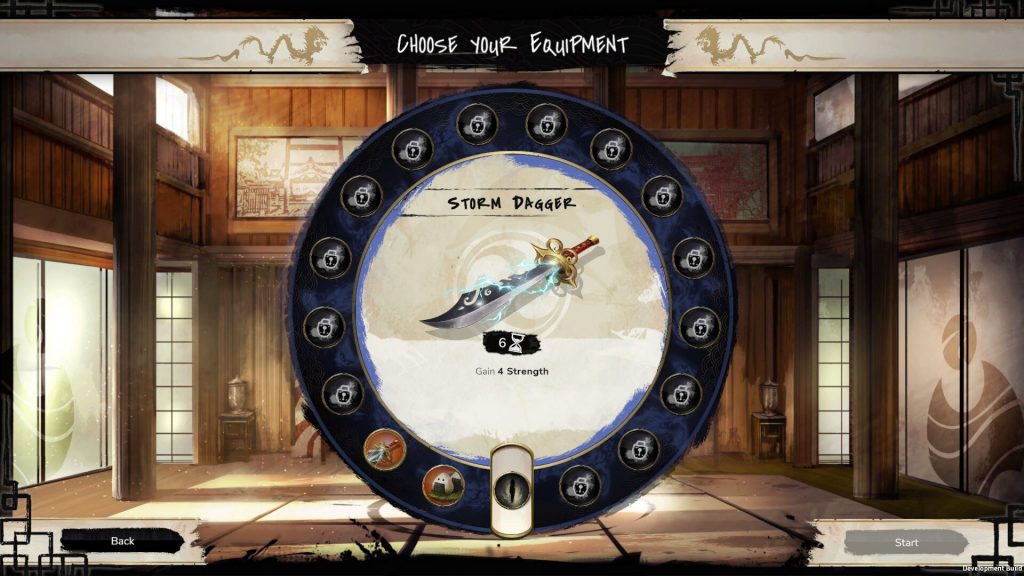 This is honestly a good thing since each House tends to focus on its own unique gimmick. Sapphire cards boost defense; Ruby lets you attack wildly and fly etc. The other vital element is energy. Most cards cost energy, including those used to traverse the map. I’ll note that you can walk around without cards, but each step still costs at least 1 energy. Worse, different land types cost more energy. Forests cost 2, mountains cost 3, and you cannot cross bodies of water. When you factor in that you normally only have 4 energy to expend each turn, this can make wandering about a pain, at least for those without wings. 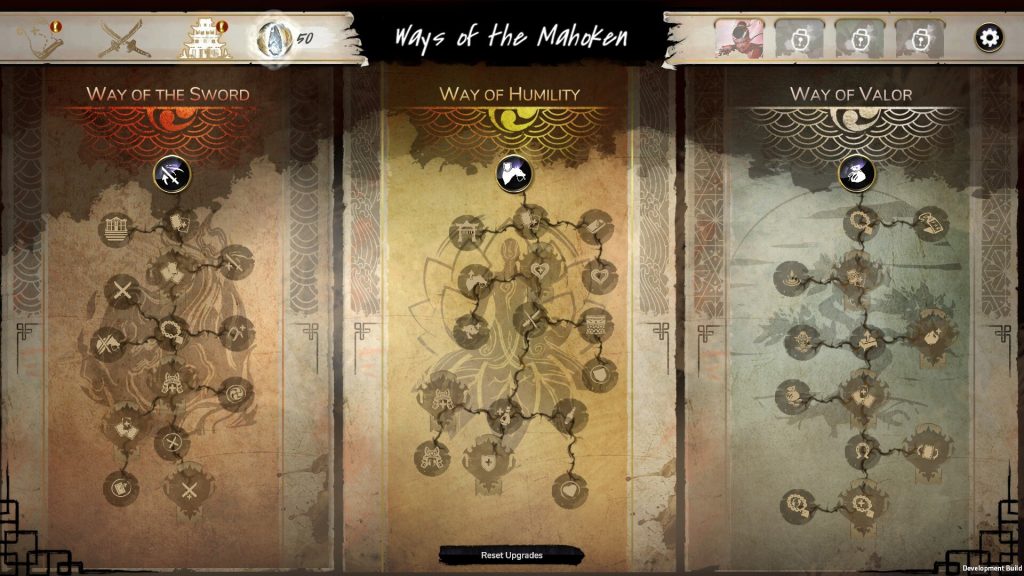 One thing that helps you mix up this formula are the Ways of the Mahoken. This menu lets you spend crystals you earn for beating challenges to unlock and enhance gameplay features. You can do things like boost the starting power of attacks, get discounts on cards you find in shops, and even get more movement cards to easily traverse the environment. There’s a ton to make your life easier, but it will take plenty of crystals. That, in turn, means going out of your way to beat the optional challenges found in every mission. Some are easy, like defeating a challenging foe or beating a mission in a certain amount of turns. Some are hellish, like preventing a certain cultist from lighting any villages on fire.

A Living Game Board 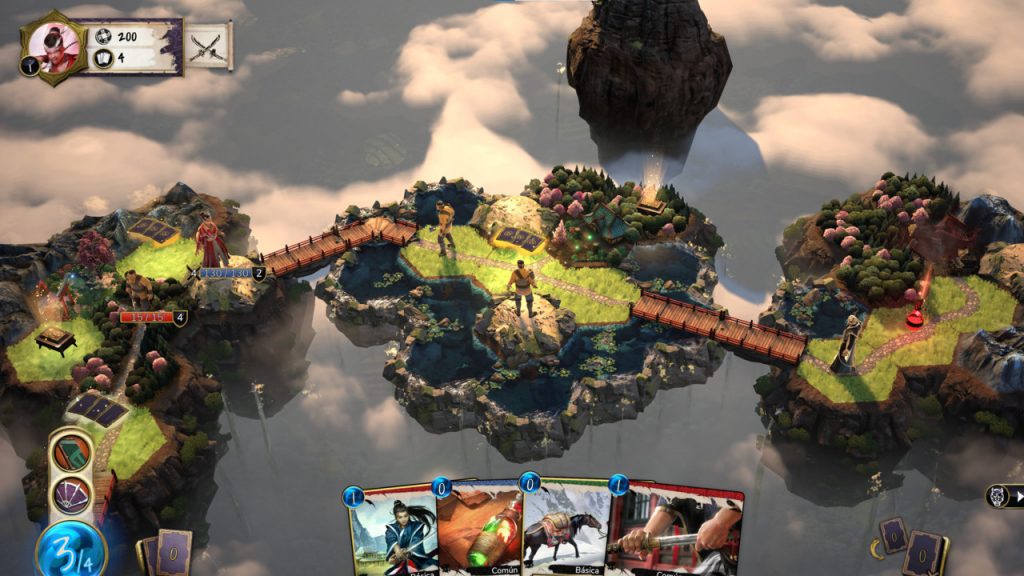 I will say, the feature which most surprised me about Mahokenshi is how the combat and exploration all take place seamlessly on the same map. In a way, the entire map is alive. This goes double for the foes, who have a range of vision and will hunt you down if you’re in their sights. Your opponents also have unique AI that determines their actions. Some are cowardly, and will run off to convince nearby enemies to attack you when they’re near death. It all makes the game feel much more dynamic than Castle Morihisa, though this game has a nasty tendency to surround you with packs of foes. Many maps also have portals that summon more every few turns. However, you can seal those by landing on their tile. Oh, and I have a special hatred for ranged attackers in this game. I often would walk over, expending all my energy that turn, only for them to start pelting me with attacks. 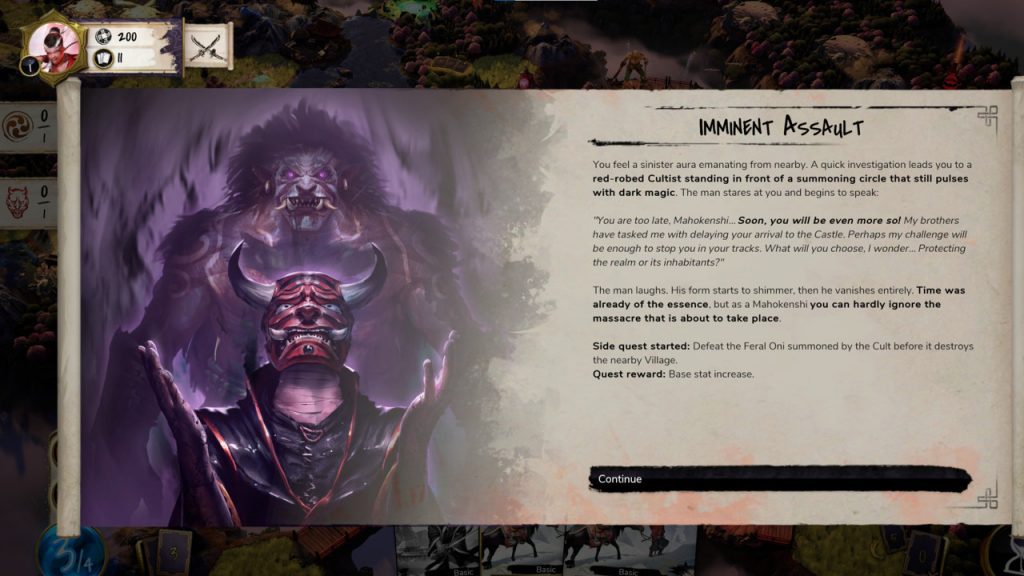 Visually I’m pleased with Mahokenshi. Each House has stunning artwork that brings them to life, and likewise, the cards you’ll use are all distinct and attractive. While the map itself is somewhat primitive, it’s not ugly either. My biggest complaint is that most maps look the same as each other, other than some basic color choices. Musically the game goes for and replicates that classical Japanese adventure music, with lots of instruments that will instantly put you in the right frame of mind. 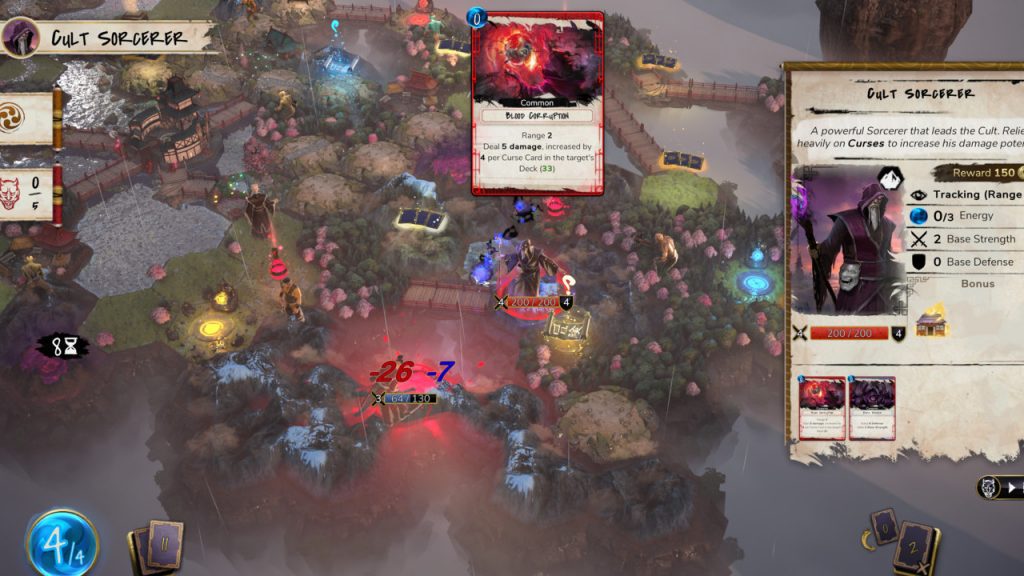 There’s a lot that Mahokenshi does right, and I wish I could only focus on that. But a few issues kept me from giving the game a higher score. While I enjoy the deckbuilding aspects of the game, sometimes the mission challenge will jump up quite unexpectedly. When you go from fighting foes with 40 to 60 health in one mission to one that has 200+ the next, I found myself flabbergasted. Especially since that foe can gain more health and usually attacks you with a posse of demons. While it’s true you’ll still gain experience from defeat which can result in more potentially helpful unlocks, it’s still a giant pain to suddenly hit a brick wall. 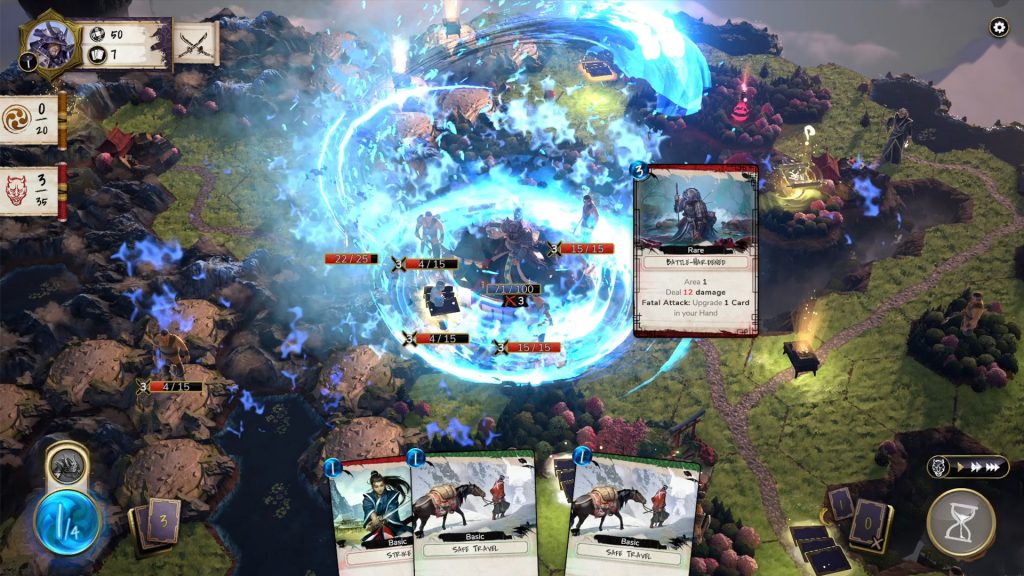 Also, while the RNG of the cards you’ll find each mission keeps things fresh, I’m not sure how beneficial it is to keep increasing the card pool. It’s pretty random what you’ll find as you explore, and sometimes you’ll lose just because you don’t encounter the right cards, either in piles on the map or purchased from Villages. On a more technical complaint, I almost always use Steam screenshots when reviewing games on PC. So I was more than a bit annoyed that every time I tried to take a screenshot during a cutscene, or even when leveling up, the game would just skip that scene altogether, making it impossible to document. I checked both before and after the release day, and the issue still persists.

While Mahokenshi definitely reminds me of Castle Morihisa, its pacing and balance is a bit better than that unfortunate adventure. Keep in mind this is very much still a challenging and sometimes brutal game, and you’ll have to grind quite a bit to get through every mission. That said, it’s a game with a creative premise, attractive artwork, and many ways to strategize.  If you’re at all a fan of deckbuilders and don’t mind some occasional difficulty spikes, I’d definitely check Mahokenshi out. 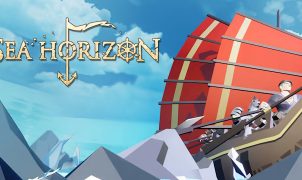 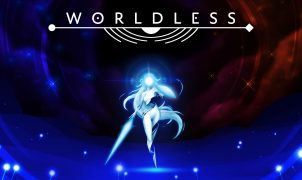 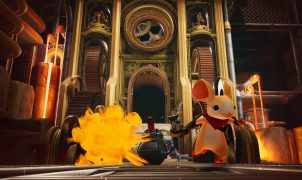