Evil West Review: Gunslingers And Gauntlets And Ghouls, Oh My! 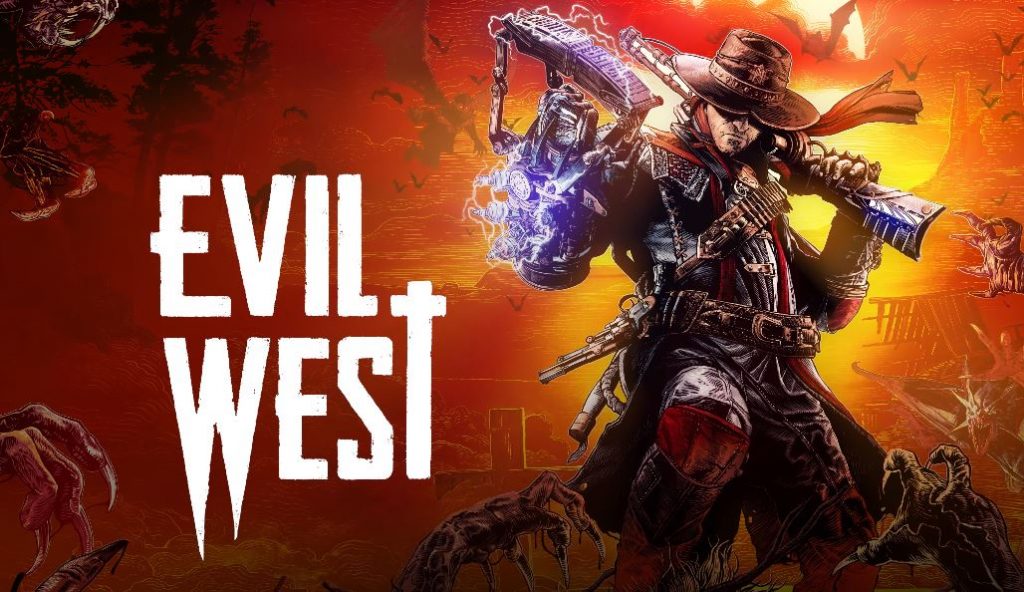 Flying Wild Hog are no strangers when it comes to crafting good, gory, fun. From Trek to Yomi’s deadly, razor-sharp swordplay to the spectacular supernatural shootouts found in Shadow Warrior 3, the Warsaw-based studio has a knack for pumping out effortlessly cool games featuring heroes that aren’t afraid to get their hands dirty. The team’s latest offering, Evil West, is no exception. Set in the great American frontier, it puts players in the cowboy boots of Jesse Rentier. A gravelly-voiced, gunslinging vampire hunter who’s handy with a six-gun and can punch lumbering zombies and werewolves into a fine red pulp with a massive steampunk gauntlet.

It’s a silly premise that almost seems like a weird Robert Rodriguez & Cliffy B collaboration, full of impossibly huge dudes with massive guns killing scores of supernatural freaks in various Wild West locales. Luckily, it’s also every bit as fun as it sounds, thanks to a robust combat system that makes every gory kill so satisfying. When it’s at its best, Evil West is easily one of the most addicting action games I’ve played this year, but its uninspired stage designs and a lack of enemy variety keep it from reaching its full potential. 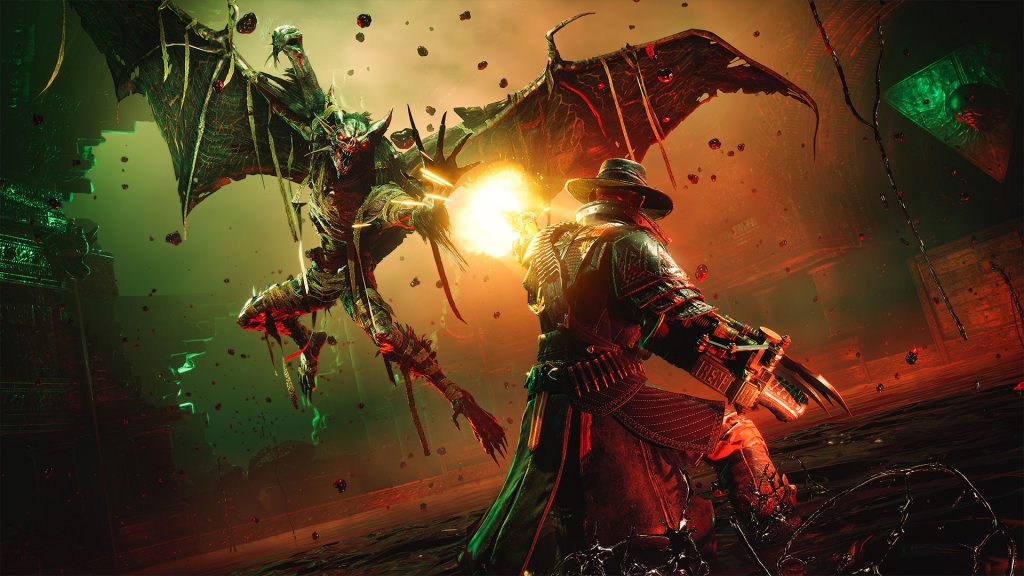 Considering the massive arsenal hanging from Jesse’s back over the game’s 15-hour campaign, you’d be forgiven for thinking Evil West is a third-person shooter. But it’s much more of a brawler in spirit. The game puts a significant emphasis on using your fists to bring down all manner of things that go bump in the night. Jesse begins the game with an agency-issue gauntlet that can deliver skull-crushing haymakers, even even launch enemies straight into the air with savage uppercuts. Not only do your punches tend to deal a bit more damage than many of the guns you’ll collect, but they’re also used to perform gruesome finishers, similar to DOOM’s Glory Kills, which can replenish a bit of your health when executed, adding a welcome layer of depth to the game’s fast and frenetic fights.

While your standard gauntlet gets the job done, things get really exciting once you get an experimental one a bit further into the game. Dubbed the Zapper, this electrified version lets you pull hapless horrors toward you for a savage beatdown or even snatch winged enemies from the sky and spike them into the ground like fleshy footballs. If that’s not enough, you can even use your Zapper to teleport toward an enemy to unleash a flurry of high-voltage blows that’ll leave your electrocuted enemy stunned, bones all aglow like the branches on the world’s ugliest Christmas tree. 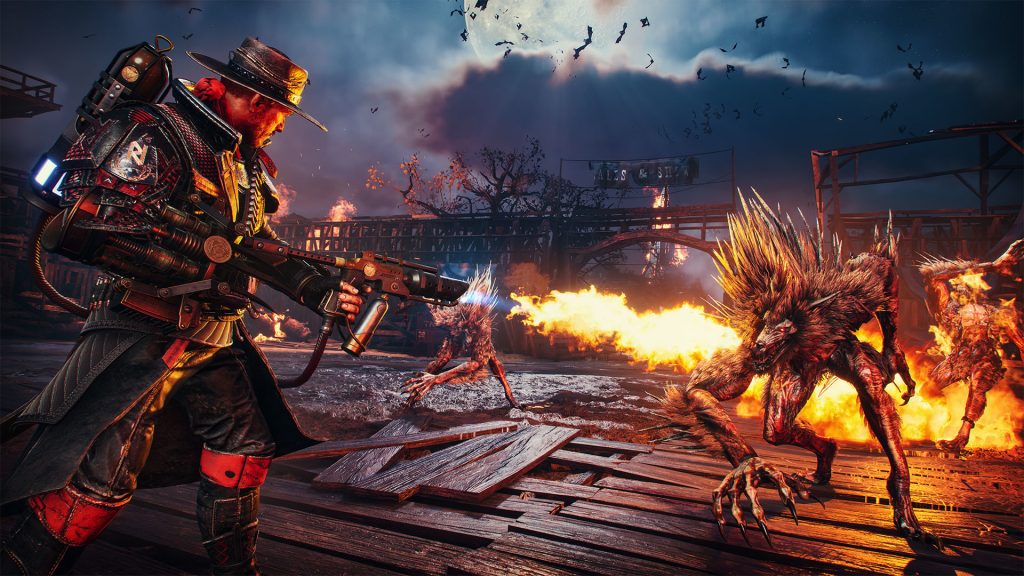 That’s not to say you won’t find plenty of occasions to itch your trigger finger over the course of Evil West’s 16 chapters. And for those occasions, you’ll be able to make use of a sizable arsenal of weapons. There’s your standard-issue revolver, a lever-action rifle that can deal precision death by targeting enemies’ glowing weak spots, and a crucifix that stuns all nearby foes so that you can get some breathing room or unleash an assault while they’re down. There are also multi-purpose weapons that can deal damage as well as help you explore each environment, such as a crossbow that can pepper enemies with bolts or create ziplines to aid in traversal or a flamethrower that can roast waves of enemies and burn through dense foliage or spider webs blocking your path.

With so many tools at your disposal, Evil West makes use of every single button on your DualSense, with some abilities requiring multiple buttons & stick combinations. Despite this, the controls rarely feel overwhelming. Before you know it, you’ll be performing crazy combos that will have you dancing from one enemy to the next with the greatest of ease, performing dizzying punch combinations and blasting your enemies into the sky with your pistols before tearing them in half with some spectacularly gory finisher.

All of these elements combine to create an insanely fun experience. Each showdown is a flashy showcase of guns, gore, and glowing gauntlets as you battle a bestiary of horror movie creatures. With its tight combat mechanics and the varied moveset it offers, I found myself looking forward to each new towering boss creature or onslaught of undead creeps the game would throw at me. 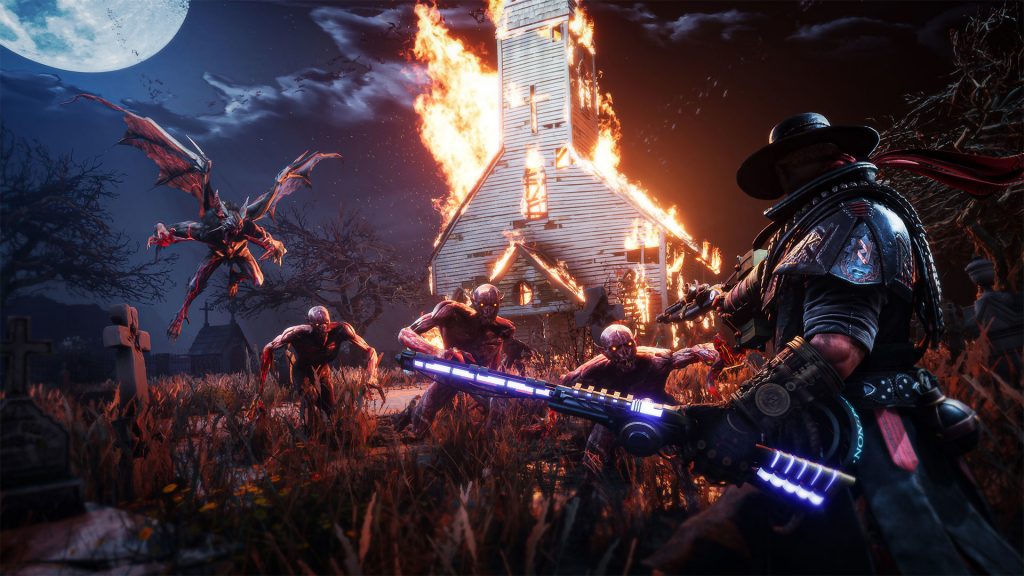 As you explore the abandoned mineshafts, ghost towns, and other familiar Western locales found in Evil West, you’ll find money to upgrade your weapons. This is done through a surprisingly beefy skill tree where you can unlock new abilities for your guns, increase their damage output, and even deck them out with Tesla-grade rounds that send arcs of energy dancing from one ghoul to the next.

In addition to upgrading your gear, you’ll also be able to buy perks through points you can find hidden in the environment or through leveling up your character. These let you do things like block projectiles with your gauntlet (this upgrade is a must), send shockwaves of lightning across the arena to roast your foes or gain more opportunities to obtain health drops. Your skillset is pretty limited at the beginning of the game. However, by the time you reach the finale, you’ll feel like a veritable demigod as you splatter entire legions of enemies without breaking a sweat.

Yes, it’s as awesome as it sounds. If you’re like me, you’ll want to play through the game multiple times to see all of the crazy abilities Evil West’s robust upgrade system has to offer. And with various difficulties to choose from, including a permadeath mode that wipes your progress after you die and a co-op mode that lets you play through the story with a friend, you’ll find plenty of reasons to come back for more after your initial playthrough.

Little Haunted House On The Prairie 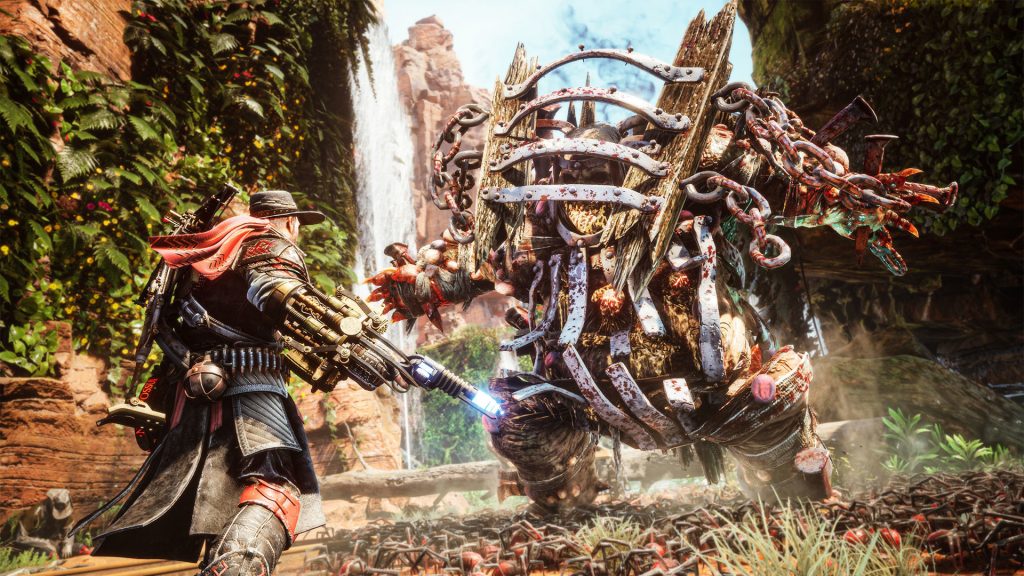 If you couldn’t tell by now, there’s an awful lot that Evil West gets right. Its combat system is unbelievably fun, offering over-the-top carnage and gripping encounters that should please any fans of character action games. The presentation is also drop-dead gorgeous, with plenty of breathtaking environments to explore and genuinely unsettling creatures to tangle with. There were moments my jaw hit the floor, like when I first spied an ominous inverted pyramid buried deep in an abandoned mine or came face to face with a huge leech creature in an eerie swamp.  However, for all Evil West gets right, a few issues cramp what’s otherwise a gloriously campy campaign.

My biggest complaint is the stage designs themselves. As I said, they sure are pretty, but there really isn’t a whole lot to them. Each one is filled with narrow corridors, where you’ll whip-swing your way over the same tiny gaps before being thrown into the next monster-filled arena. With little freedom to explore, Evil West starts to feel a bit like an amusement park haunted house as it carefully corrals the player to the next ghastly ghoul.

That’s not to say there aren’t a few times the game tries switching things up. One stage features a minecart ride where you’ll need to blast switches to keep from falling off the rails and to a messy death. Another features a rather clunky block-pushing puzzle. Needless to say, these mostly hit the mark. I would have rather had more memorable set-piece moments to round out the experience. But in any case, they get the job done.

Evil West would have also benefitted from a few more monster types to keep the action fresh. I wouldn’t quite call the selection anemic, but toward the last quarter of the game, you’ll battle the same handful of ghouls over and over again. And as each enemy usually requires a specific strategy to bring down, things become a little too formulaic as a result. This is a little disappointing, given just how expansive the combat system in Evil West is.

Despite a few rough edges in terms of stage design and enemy variety, Evil West is a must-own experience for fans of the character action game genre. With a deep and engaging combat system, a meaty campaign, and a killer sense of style, it’ll leave you glued to your controller until the credits roll. If you’re a fan of Flying Wild Hogs’ brand of gory, in-your-face action, Evil West is a non-stop thrill ride through the freaky frontier that you won’t want to miss. 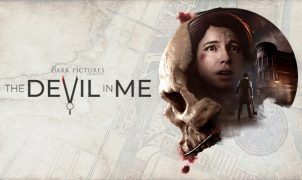