Astlibra Revision Review: As the Crow Flies to Adventure! 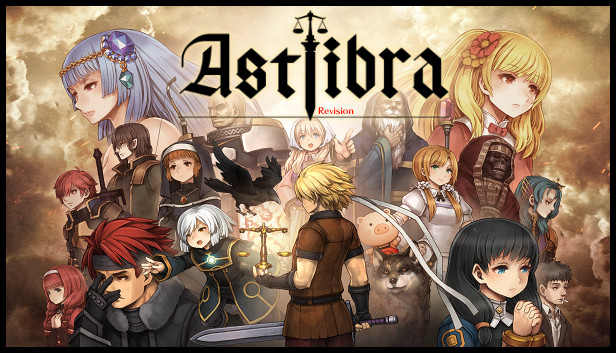 Aside from seeing one trailer for Astlibra Revision, henceforth referred to as “Astlibra,” in a Metroidvania Reddit group, I hadn’t heard much else about this game. It appeared to be a bit too chaotic to click with me, and I sort of dropped to the wayside. Receiving the game for review gave me the opportunity to see how this game performs when I’m able to start from the beginning of the journey and build my way up to the cacophony of action that was present in the video and demo. Fortunately for me, this review convinced me of just how wrong I was on this assessment, and now, I hope to present to anyone that reads this why Astlibra is a game that deserves far more than a passing glance.

First and foremost, I want to set the record straight on something regarding this game. Though the screenshots may lead someone to believe that this is a Metroidvania title, I feel that this impression may be a bit misleading. It is actually more akin to a classic action RPG with platformer elements such as Nihon Falcom’s Ys 3: Wanderers From Ys – though I feel that this game vastly improves on that title. Musically, Astlibra provides a similar association with Nihon Falcom classics as well.  The gameplay takes place across a series of chapters where the player character is tasked with traveling to a new, self-contained location from the main town. After completing a chapter, it is possible to return to old locations to obtain items that may have been missed. But the sense of expanded exploration usually felt in a Metroidvania game is not present here. Not a detriment to the game in the slightest, given that I believe that it accomplishes what it sets out to do; however, I could see someone being disappointed if a Metroidvania is what they wanted here.

Slash and Dash to Success 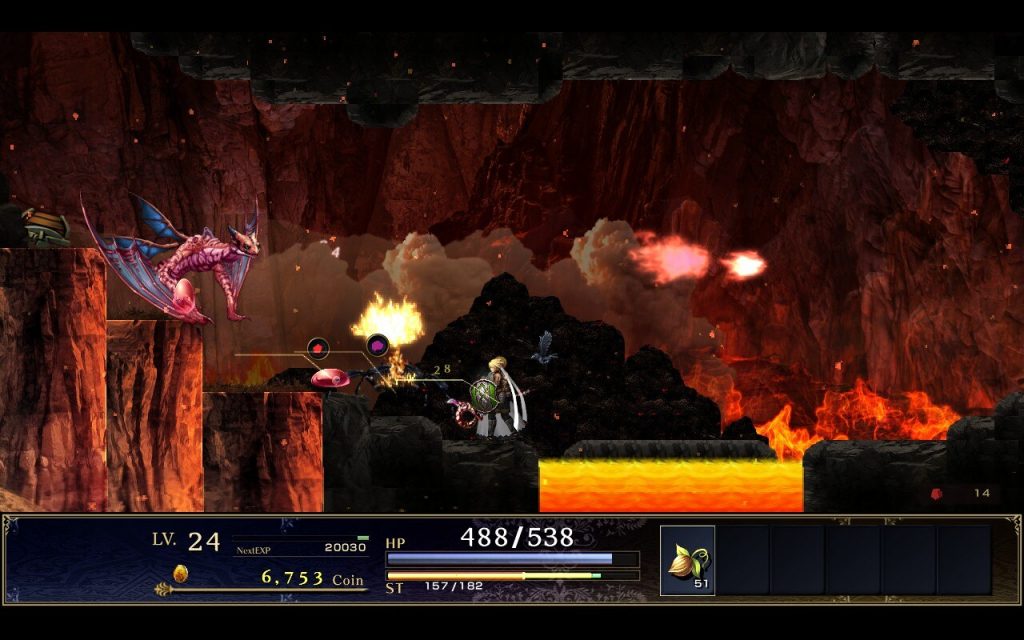 As stated above, the narrative of Astlibra takes place across a series of chapters as the player character, along with their partner “crow” companion, Karon, work with an adventurer’s guild to make a living while also seeking to find a long-lost friend that they were separated from during a monster assault on their village some years prior – an attack that left them in some rather bizarre circumstances. There are several additional elements to muddy up the works, such as time travel, mysterious adversaries, and of course, a fun arena sidequest, but it provides enough engagement to motivate someone to press on through the game. I didn’t particularly find it to be gripping, but I was very much interested in learning just what happened to the player character and seeing them through on their journey. 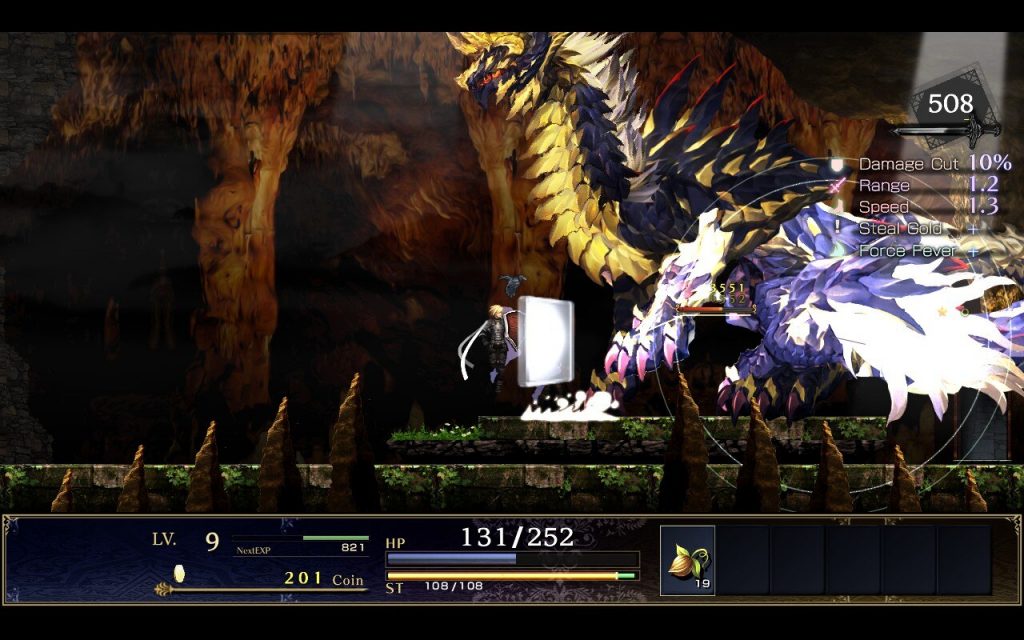 Combat in Astlibra is very active and offers a quality number of actions for combat versatility. There’s the basic single-button combo attack function which varies in reach and speed by way of what weapon is equipped at the time. When equipped with a shield, there is the ability to guard against both melee and projectile attacks that activates a cooldown after each use in order to prevent overuse.  There is also a very cool “summon” mechanic in which Karon, the crow companion, will be able to transform into a variety of different creatures for one-time attacks by expending SP points that are accrued by landing blows in combat. More are unlocked as the game progresses, and it is possible to have six different transformations available for use at a time. Lastly, with thorough exploration, a variety of scrolls can be uncovered that add even more attacks to the kit, such as a rising slash for launch combos. 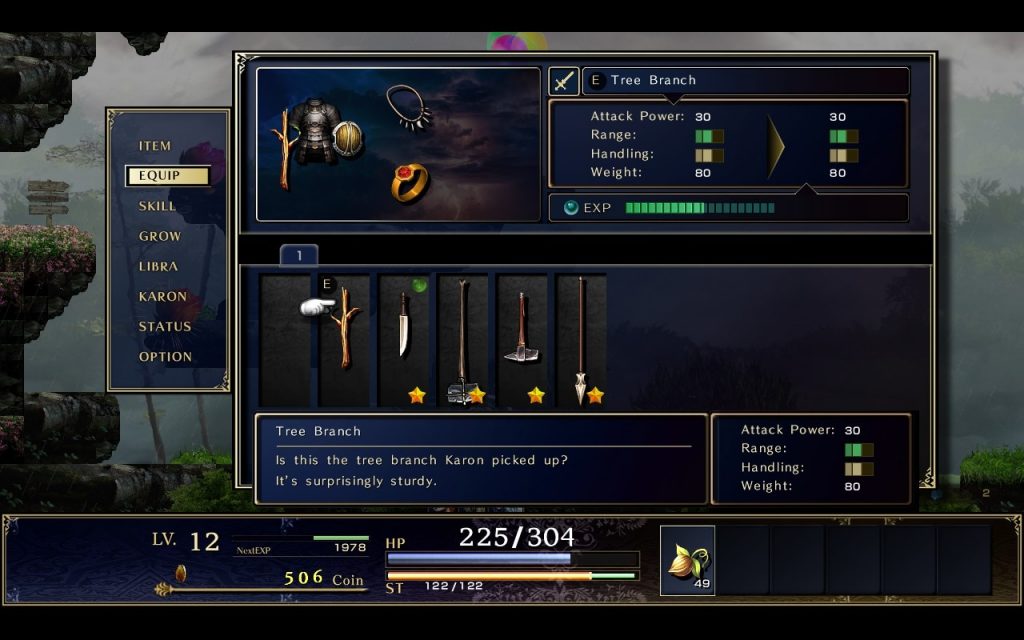 Quite possibly, the most addictive aspect of Astlibra is the fact that the game constantly gives you the feeling that you are obtaining something new and growing as a character – some of those ways I will describe. Skills and abilities each cost a certain number of crystal slots to apply.  Weapons, shields, and armor can be leveled up through use until they are mastered – each bestowing the player with a new ability or more crystals for equipping more abilities. Skills such as dashing and double jumping come from this, so it is imperative to mix and match equipment to master as much of it as possible.

Leveling up the character allows for skill point distribution to a variety of stats, and, to prevent analysis paralysis, these allocations can be freely re-distributed at the wandering shop that follows the player throughout the game. Upon death, most enemies drop colored crystals, which can be collected. These crystals come in six different varieties and can be taken to a growth board at any time, where they can be spent to unlock a multitude of upgrades ranging from minor stat increases to leveling up currently held summon skills to even entirely new summon skills to equip.

Lastly, there’s even a mechanic where items can be applied to Libra scale with them, bestowing greater benefits the closer to perfect balance the scale gets. Even if the combat weren’t already a joy to engage with , the sense of always being close to obtaining something new always kept me wanting to play for just a little longer each session.

Putting Your Skills To The Test 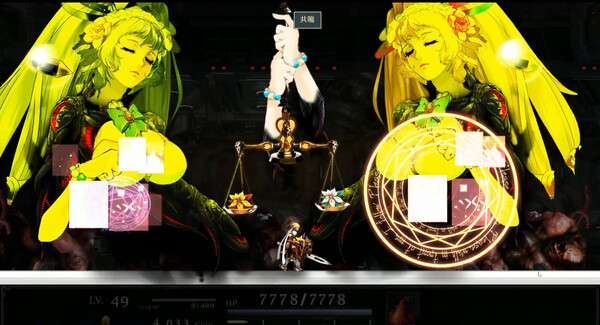 Upon starting out on this game, I found myself feeling more than a little cocky and selected the Hell difficulty and found it to be unforgiving and punishing in the best way possible. I was forced to utilize the combos, the shield bash, and stick and move maneuvers to press onward – resting on my laurels usually resulted in a one or two combo death. And I absolutely loved it! The first boss was the moment when I felt like I shined the most as I was able to maintain a high combo, reaping the increased attack benefits along the way. It was then that I realized the value of properly utilizing your summon skills and good evasion to maintain the pressure while staying out of harm’s way.

Unfortunately, in order to make ample progress for the sake of the review, I had to force myself to step down to Hard Mode, which I am glad that the game allows you to do. What I found was that the game still had enough of a challenge to keep you from button-mashing your way through encounters but also gave enough leeway to effectively heal when necessary and also to comfortably utilize all of your gear to max it out. From there on, the fun that I had actually increased as I became more comfortable with just leveling up and growing my character without fear of lost progress on a simple fumble. As such, I would likely recommend the use of Hard Mode on a first playthrough.

I would have to say that my favorite moment of the game was when I reached the volcano area because not only did I feel like it was the first moment where the narrative introduced  an overarching danger to the situation, but it was also when I most began to notice similarities to Ys 3. There was a hard rockin’ music track that played throughout the area, enemies seemed to be more aggressive and hazardous throughout, and I felt like I was starting to find more secrets and mining resource points. Hell, I even half expected the next area to feature a mountain range which would be on par for the area progression featured in that game? Was I correct? Well, I’ll leave it to you to see for yourselves! 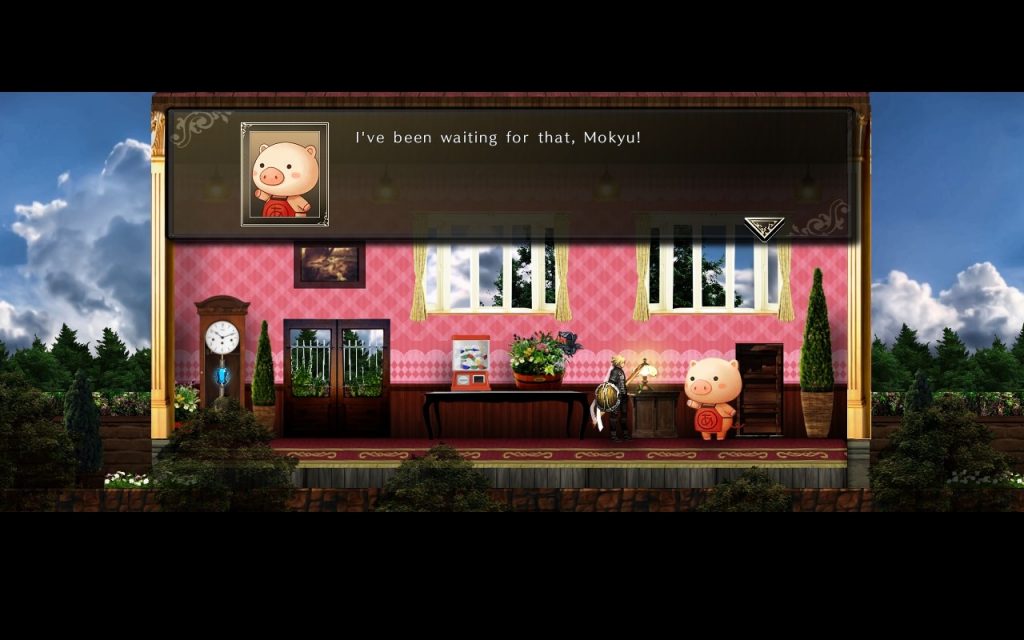 Astlibra Revision is a game that initially didn’t gel with me with but, very quickly, managed to ensnare me in a very addictive progression loop anchored by fun and flowing action gameplay. In other words, I have had an absolute blast with this title, and it is definitely going to be making my top ten list of 2022. This title isn’t receiving much in the form of marketing or word of mouth, and that’s an absolute shame because I feel like anyone that is a fan of classic action RPGs with platformer elements will absolutely take well to this game. And considering that the entire game was crafted by one person speaks volumes for what they have accomplished here, and I look forward to seeing what they attempt to do next.

If you’re a fan of classic 2D adventures, Astlibra Revision offers a retro-inspired quest worth undertaking, and I am genuinely glad that this review crossed my desk because, without it, it would have very likely evaded my attention. Do yourself a favor, and do not let that outcome happen to you.