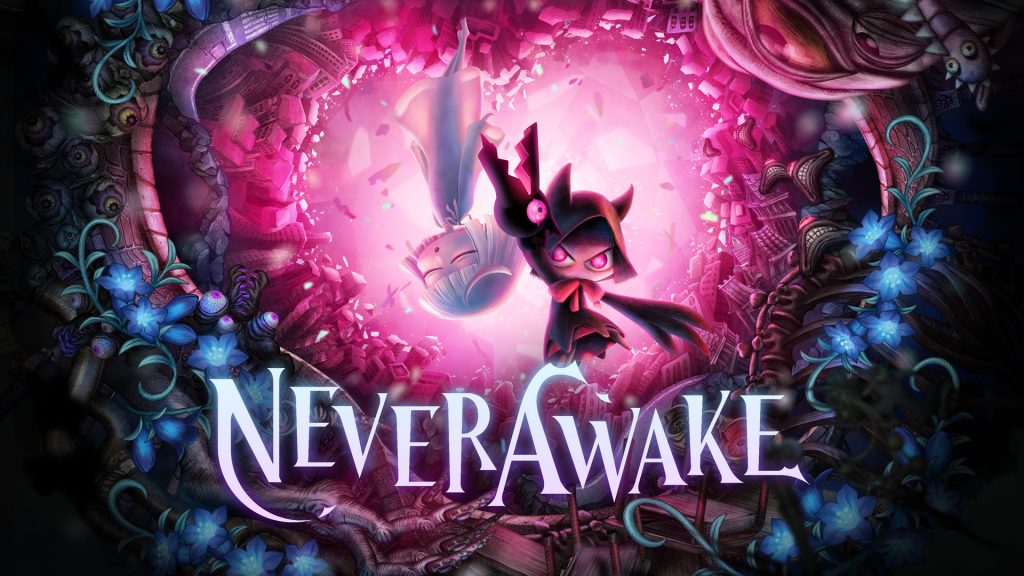 One of the fringe benefits of being a game reviewer is that I don’t just get to cover well-known games and series, but I get to cover compelling new titles. Stuff that perhaps the majority of players haven’t heard of. NeverAwake is absolutely one of those games. I wasn’t sure what to expect from this mashup of twin-stick and Shmup developed by Neotro and published by Phoenixx. I certainly didn’t expect to enjoy it so very much. But after spending some time with the game, not only is NeverAwake a title I now adore, but it’s easily one of the best games I’ve played in 2022. 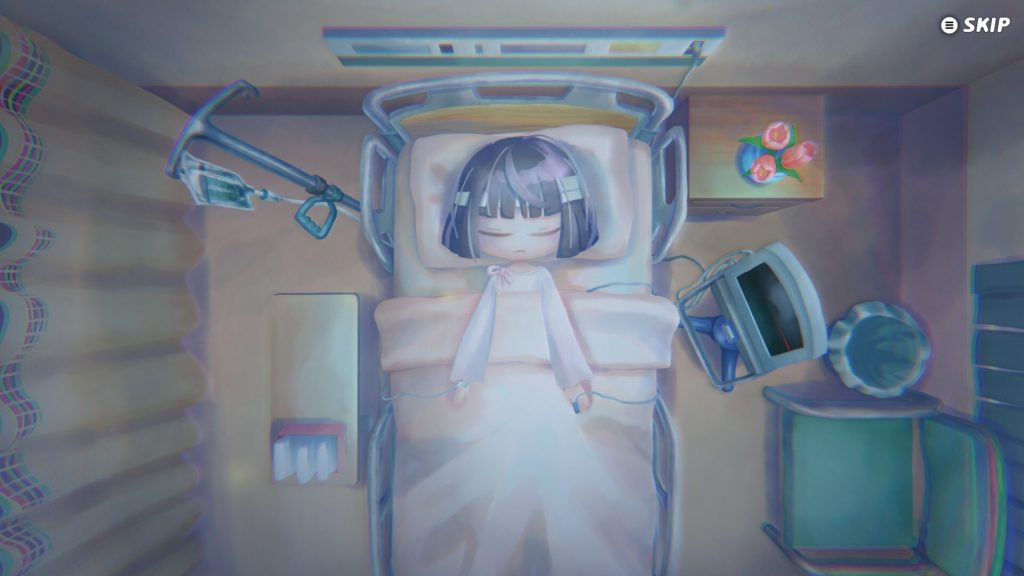 NeverAwake is about a little girl trapped in her own body. The reason why isn’t clear immediately, but over the course of the adventure, you’ll get more clarity from diary entries written by her. While she can’t fix her condition in the real world, Rem’s subconscious can help out. It’s tasked with fighting past her waking mind’s memories, anxieties, and nightmares, and helping heal her bit by bit. Along the way, not only will you get clarity as to what’s happening, but you’ll uncover some surprising mysteries on the path to waking Rem from her hospital bed coma. 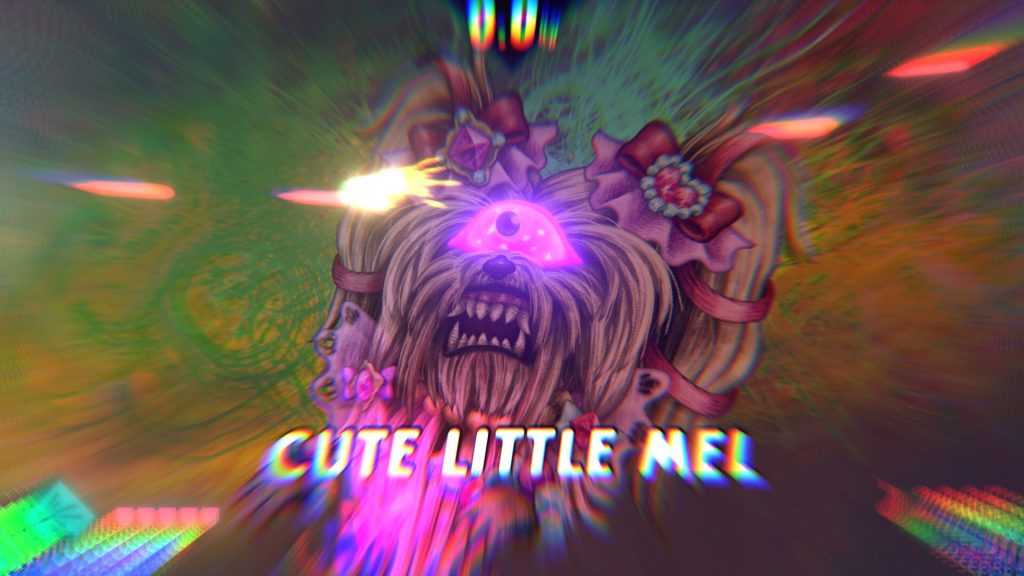 While some of the individual diary entries failed to grab me, overall, they did a good job of painting a tormented little girl. Not only did she not feel adequate in school, but her mother made her miserable. While she clearly has a loving grandmother, that alone wasn’t enough to protect her against the insecurity that permeated her young life. Although this would be tragic if Rem couldn’t do anything about it, NeverAwake provides ample opportunities to help the young girl heal the best way possible – by blowing her fears to smithereens! 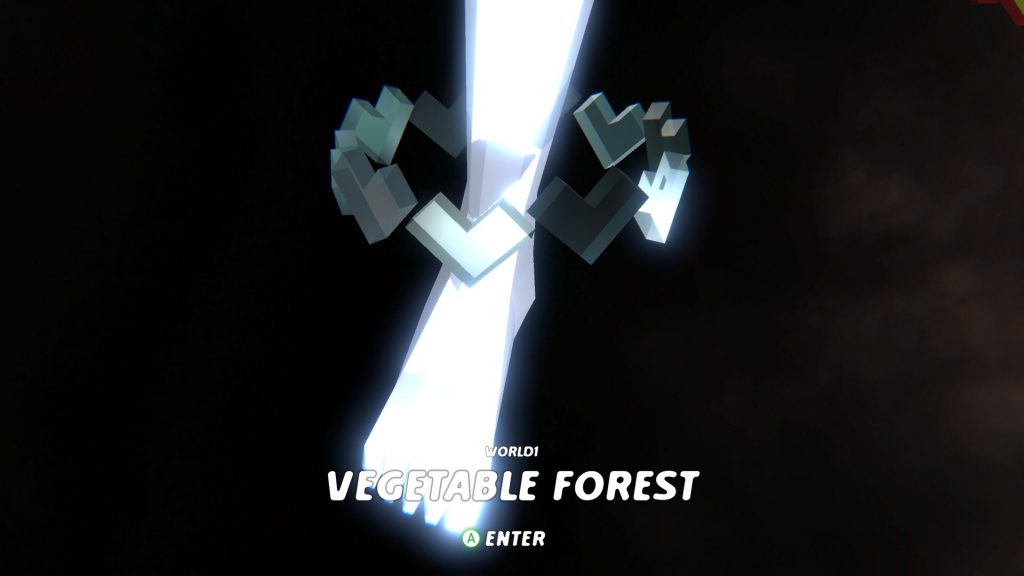 The game is broken into different worlds composed of several levels, each focused on a different fear. The first world contends with Rem’s fear of eating vegetables, while the second one is about her terror of dogs. Those topics might sound banal by themselves, but the way the game brings them to life is quite frankly breathtaking. A big reason for that is the gorgeous hand-drawn art. It mixes abstract foes with horrifying apparitions from the deepest corners of Rem’s mind. While an eggplant might not sound so bad, the boss that represents it wouldn’t be out of place in an H.R. Geiger movie or Persona title. Likewise, you dog lovers out there will see canines in a whole new light after defeating some very bad dogs. 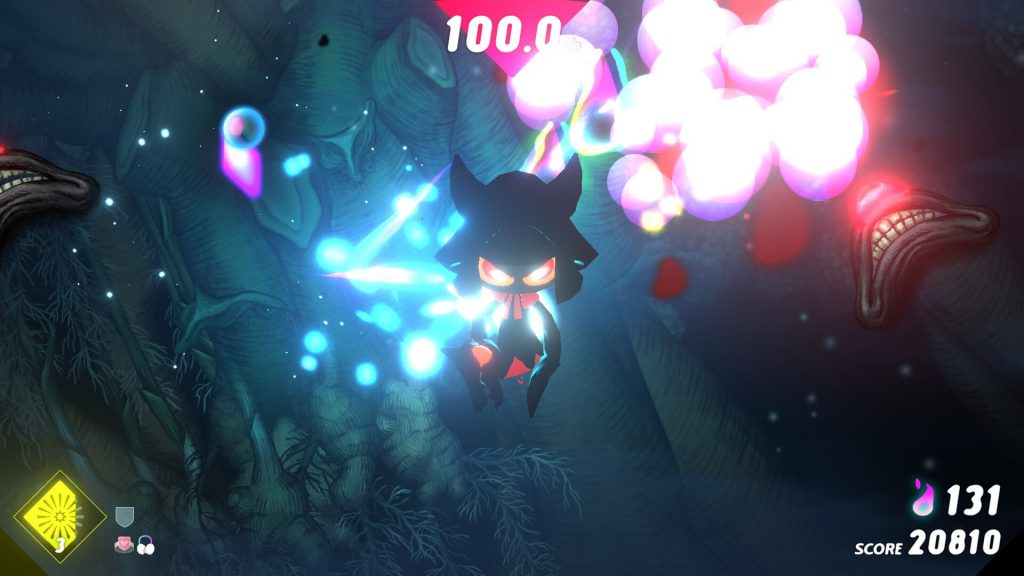 Admittedly I was a little worried about the mixture of Shmup and twin-stick shooter, but it works remarkably well in the game. Aiming with one stick fires, you move with another, and you can dodge and use limited bomb attacks. Though you’ll never know in advance which direction stages will scroll, it quickly became second nature firing in any direction while avoiding waves of foes. While there’s some recurring enemies in the game, each world has several of its own unique creatures. Some noteworthy ones are the stretching Dachshund, overly excited hypodermic needles, and freaky children with grasping claw-like hands. But what I liked best about the game wasn’t the challenge or even how they constantly mix things up. What I loved was how you actually beat the levels in NeverAwake. 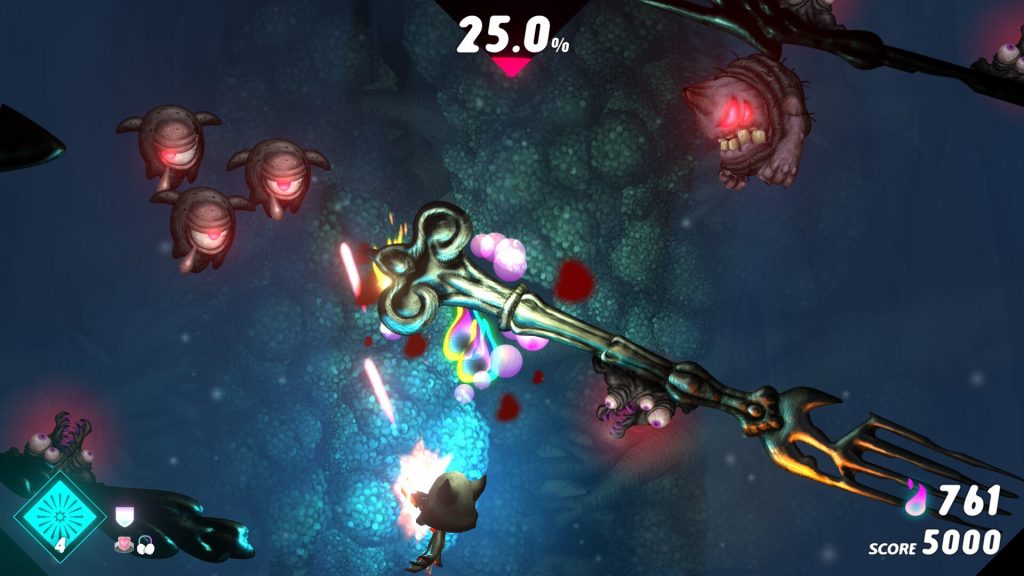 See, most Shmups are about defeating everything in your way, especially epic bosses. But that wouldn’t make sense in a game about a girl trapped in her own mind. Instead, every foe and boss in the game will provide souls when destroyed or damaged. By gathering enough souls to fill 100% of your meter, you’ll finish the stage. To help, you’ll loop through the stage once you reach a certain point, allowing you to gather even more souls. There is a catch, however. Each loop makes the enemies you face that much more powerful, and often introduces new gimmicks. Some foes might just sit there in one loop, then fire projectiles in the next. Worse, go through enough loops, and you won’t be able to deflect some enemy projectiles with your standard shot. Oh, and if you enter a loop without defeating all the foes on screen, they’ll follow you through, making life difficult. 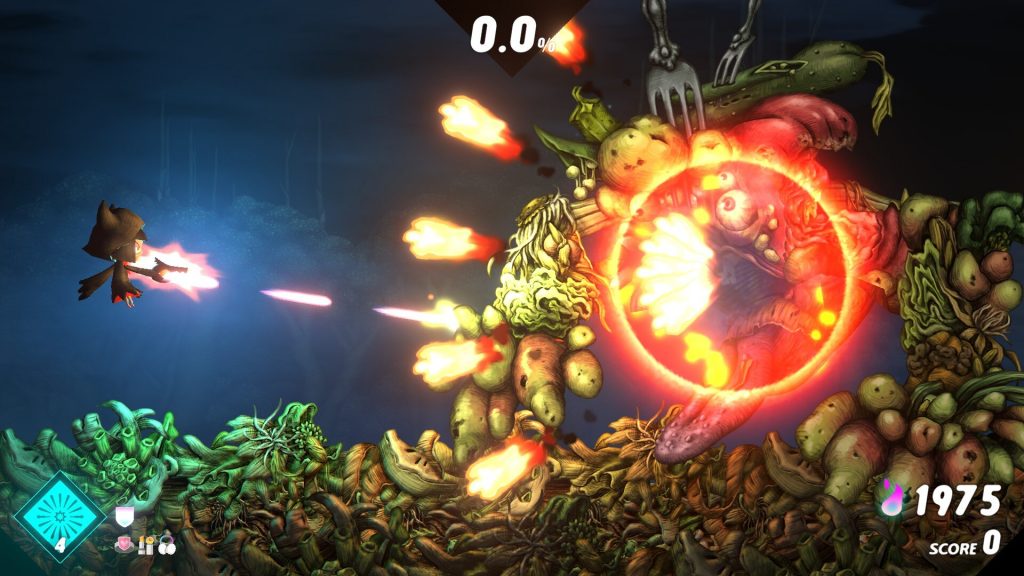 As you might imagine, this makes boss battles more of a Bullet Hell scenario, with Rem dodging constantly until she can gather enough souls. On the plus side, most bosses will expel a massive chunk of souls all at once, assuming you’ve done enough damage first. The harder ones only provide souls piecemeal. While boss battles don’t feature loops, the bosses do get stronger each time you deal sufficient damage to them, making the next phase much more dangerous. Though some bosses did annoy me, overall, I was just stunned by the creativity on display, and loved how no boss was a clone of any other. 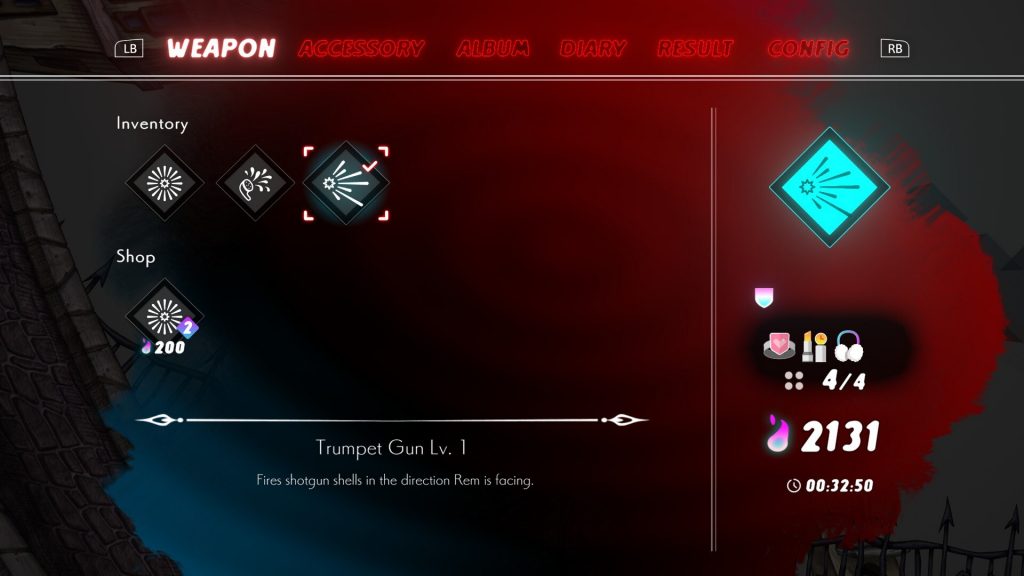 That all would be great by itself, but NeverAwake makes another smart decision – it lets you pick up items to improve your chances, which you can purchase with souls you’ve acquired. Each stage will reward you with a certain amount after beating it, and if you do well and manage to beat the stage without dying once, you’ll get even more souls. While you are initially limited in how many items you can equip at a time, you’ll eventually be able to increase that upper limit, making it so you can really personalize the experience. 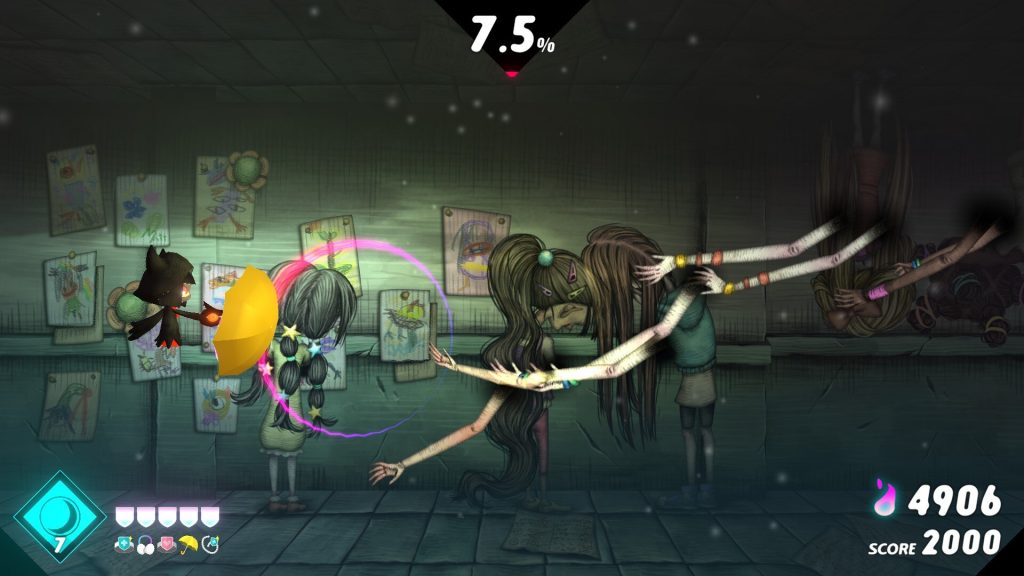 At first, Rem only has one shield to protect her from fatal damage, but I quickly invested in more. You can also equip an umbrella to protect from incoming bullets, magnetically draw souls towards you, and much more. There’s also different bomb types you can buy. Rem starts with a panoramic explosion of bullets, but sometimes you’ll need more concentrated attacks, like a shotgun blast or gravity well that damages everything in a certain radius. You can also upgrade most items in the shop to more effective levels for the low price of a few more souls. If all that wasn’t enough, you will also unlock optional missions in previously beaten stages. You’ll have to do things like beat bosses while avoiding collecting souls, find hidden warp points, and more. Doing so successfully unlocks images in a gallery you can view later. There’s also an Oversoul mode you can try if a stage is giving you too much trouble, but I never tried that feature out.

Stranger In a Beautifully Strange World 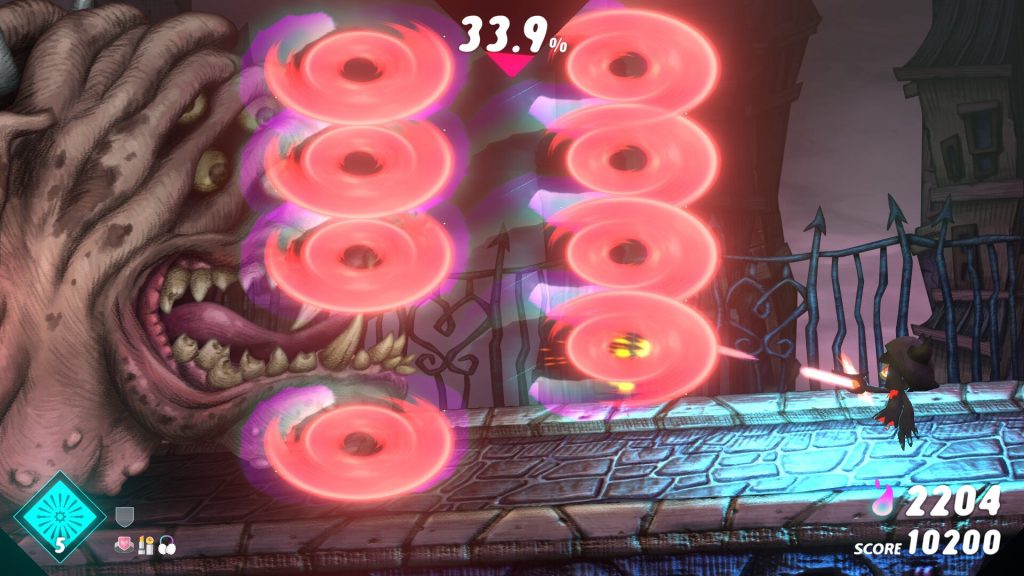 I know I touched on this earlier, but honestly, it bears repeating – the visual design of NeverAwake is outstanding. It’s all lush, hand-drawn, and full of intricate details. The foes Rem faces are by turns adorable and horrifying, from cute little dogs that transform into fanged terrors to one very eventful boss fight against a dentist. Stages are displayed as a chain of darkened, blocky hearts that lock Rem in place, and once you beat them, they change to a healthy red and loosen their grip. 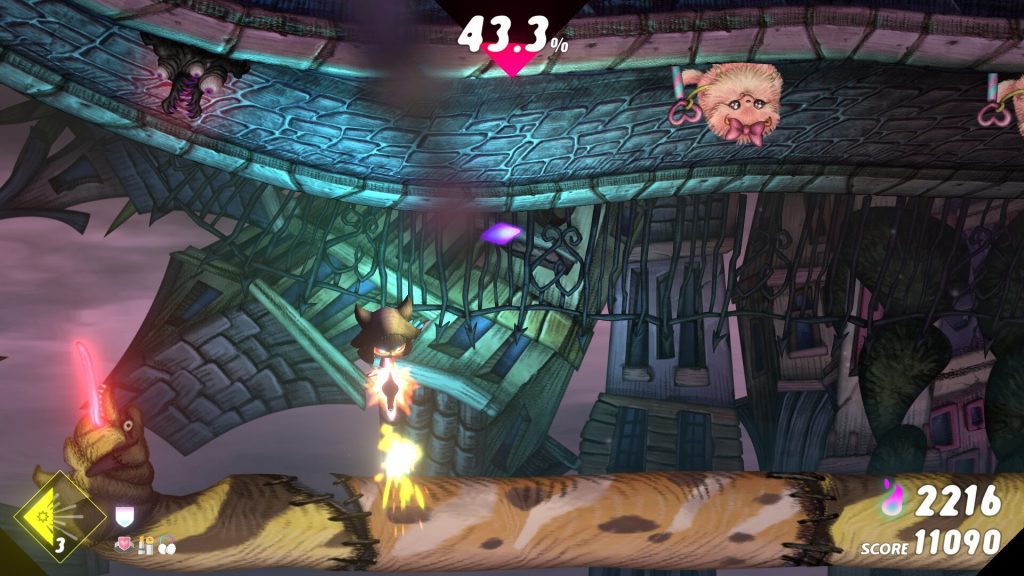 The only small discordant note are the cutscenes that appear at the end of each world, which are fuzzy and make awkward use of panoramic turns. NeverAwake’s music is pretty great, while occasionally reminding me of Castlevania. Though the entire soundtrack isn’t gothic, it’s all moody and very atmospheric, with regular notes of creepiness. Even better, it makes great use of audio cues to help notify the player when it’s time to dodge enemy attacks. 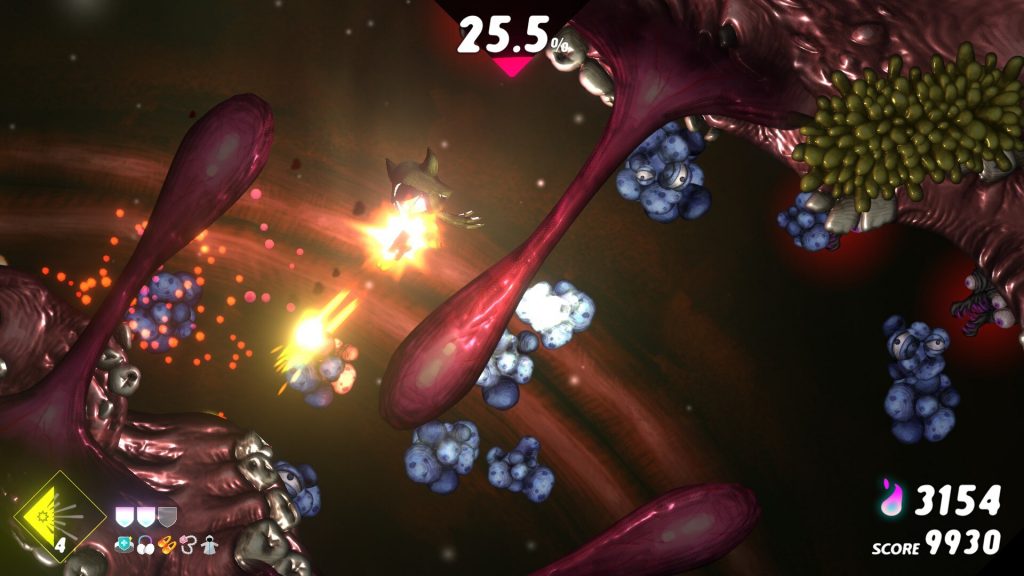 Though I enjoyed the overall variety found in the game, there’s a couple of frustrating details that held NeverAwake back. Some stages have a weird mechanic where defeating enemies doesn’t generate soul. Instead, you’ll have to blast away at more difficult foes like nasty exploding specters, or continuously attack giant crystals. Though you can’t destroy the crystals, attacking them will gradually peel off souls. While the crystals are good at blocking projectiles, it’s often challenging to divvy up time between attacking foes, attacking the crystal, and gathering souls. Also, NeverAwake really has a bad tendency to cramp you in stages. It’s comparable to series like R-Type, and equally annoying.

Waking Up Is Hard To Do…

Small issues aside, NeverAwake is still a transcendent and shockingly enjoyable adventure. Not only did I get invested in the story of the game, but the gameplay constantly kept me on my toes, and was a balanced challenge. While some may be irritated by the hardcore vibe of the game, I’d say this is a title that almost any gamer can appreciate. Add in the low price, and this is a must own adventure. 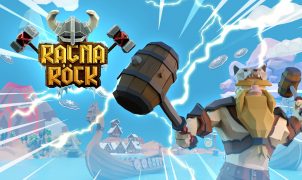 Ragnarock ‘n Row your way to Asgard and beyond Every once in a while, you come across a game that’s so perfect in concept and so brilliant in execution…