Moonscars Review: Not the Clayfighter Sequel I Was Expecting! 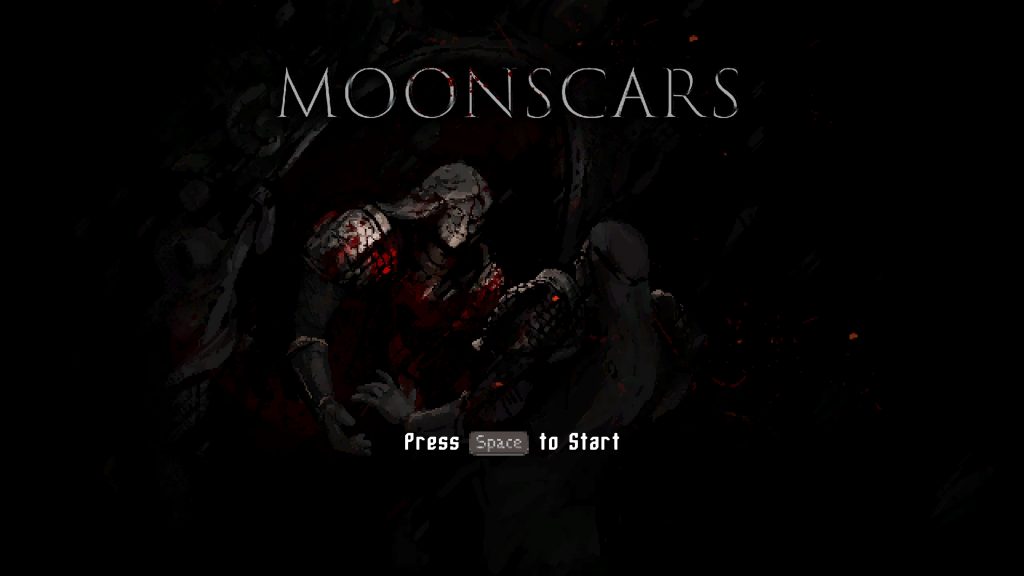 I’ve been a fan of the Souls franchise ever since its inception in 2009. Originally, I was drawn in by the promise of a game designed with challenge at the forefront of its design. But I stuck around because I also came to enjoy the combat mechanics, area exploration, and item/equipment management. It didn’t originally catch on, but a little after the release of the first Dark Souls, the community trajectory shifted, and we suddenly found ourselves eating good at a banquet of 2D and 3D “souls-like” game releases. Fast-forward about eleven years, and, after the utterly amazing Elden Ring, I’ve reached a bit of burnout on the style. So, when our esteemed editor connected me with the opportunity to play this game, I was skeptical. But he was confident that this game had the chops to bring me back into the fold. I took him up on his offer, and now everyone that is reading this review gets to come along to see if this game had what it takes to make me a believer in this well-worn subgenre again.

Moonscars tasks you with taking on the role of “Grey Irma,” one of a group of clayborne warriors referred to as “Pristines.” She wakes up in a land that feels foreign to her, with many of her memories seemingly lost, her relationship with her fellow Pristines is newly strained, and she is none the wiser as to whatever the cause of any of this may be. Her only lead on acquiring answers is to seek out The Sculptor, the very being that created them, and extracting the information from him directly. 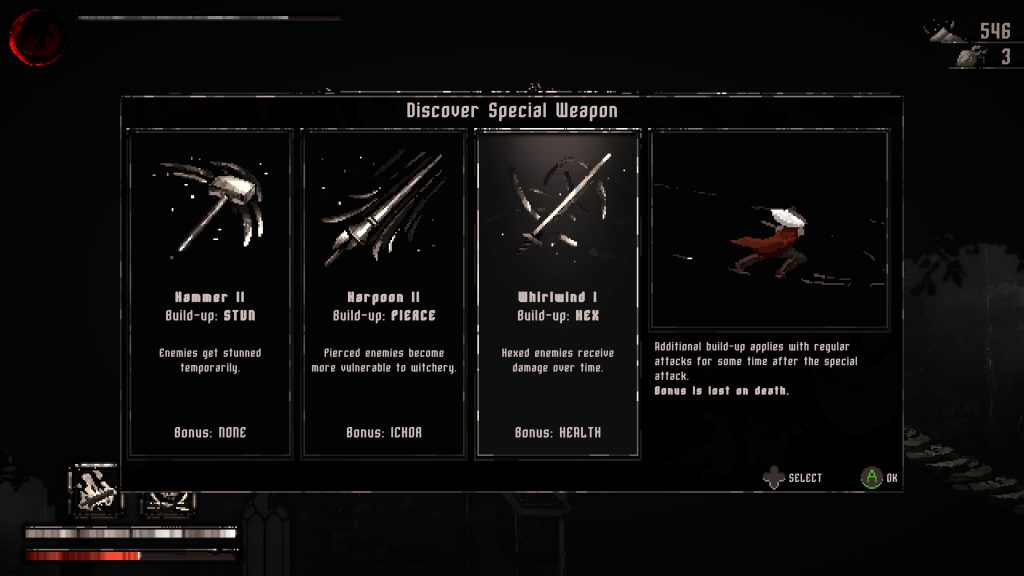 Grey Irma is decked out with a fairly standard kit early on. She gets a traditional sword melee attack which can be charged by holding down the attack button for a heavy strike, a second sub-weapon that can be changed throughout the game, a jump and dash maneuver for mobility, special attacks, the ability to self-heal, and a parry. Unlike many souls-like titles, Moonscars lacks a stamina gauge which I felt to be a boon as it provides the gameplay with a bit more of a frenetic pacing. In order to keep players from freebasing on uninhibited acrobatic antics, the game instead saddles her with an ichor meter. This substance powers her special attacks and her healing factor, which of their uses draining the meter while landing melee strikes on opponents, refills it. In addition, each use of a special attack results in a cooldown that can only be restored by using melee strikes.

The parry system is probably my favorite component of the battle system in Moonscars. Whenever an opponent performs an attack that is able to be parried, a red flash will appear on them. It doesn’t tell you exactly what attack they will do or what moment within the attack you can perform the parry, but the inclusion of this warning mechanic made me more courageous and willing to utilize parries and dish out the critical damage that comes with it. It doesn’t exactly remove the challenge from parries, especially in situations when you are being assailed by a multitude of opponents at one time, but it does make them far more approachable for those that typically air on the side of safety and caution.

Clay In the Mirror – Asking You to Kill Your Clone 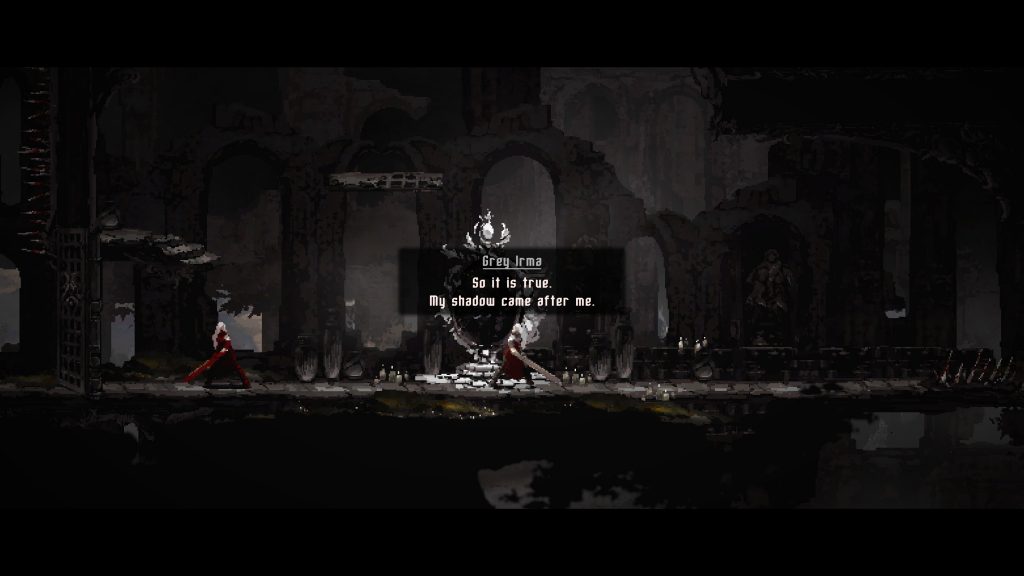 As you explore the world, you’ll come across mirrors that serve a number of purposes. They can be used to heal your health and ichor, learn and upgrade your special abilities at the cost of the game’s currency of bone powder, change your sub-weapon at the cost of the game’s other currency of glands, teleportation between other discovered mirrors, and lastly, to travel to the game’s hub where you can shop for accessories and interact with some NPCs. Moonscars slips a unique twist on this safe haven mechanic by way of doppelgangers. When you use a newly discovered mirror for the very first time, your soul is transferred from your current clayborne shell to another residing in the hub. This leaves behind a doppelganger wearing your former shell and the sub-weapon that you were wielding at the time. This doppelganger will be waiting for you upon exiting the hub, and you’ll need to defeat it in order to teleport safely from that space again. Defeating it will allow you to either take back your former sub-weapon or choose from one of two others that each come with a temporary increase to either your ichor or health gauges. I enjoy this way of selecting sub-weapons because it provides incentive to using a variety of different weapons instead of sticking with a favorite – my personal favorite being the Painwheel. The doppelgangers themselves, on the other hand, do begin to become a chore as they eventually go from being a legit obstacle to a frustrating struggle that you have to cheese your way through in order to move the game along.

It’s Not Always Sunny When The Gang Gets Aggressive 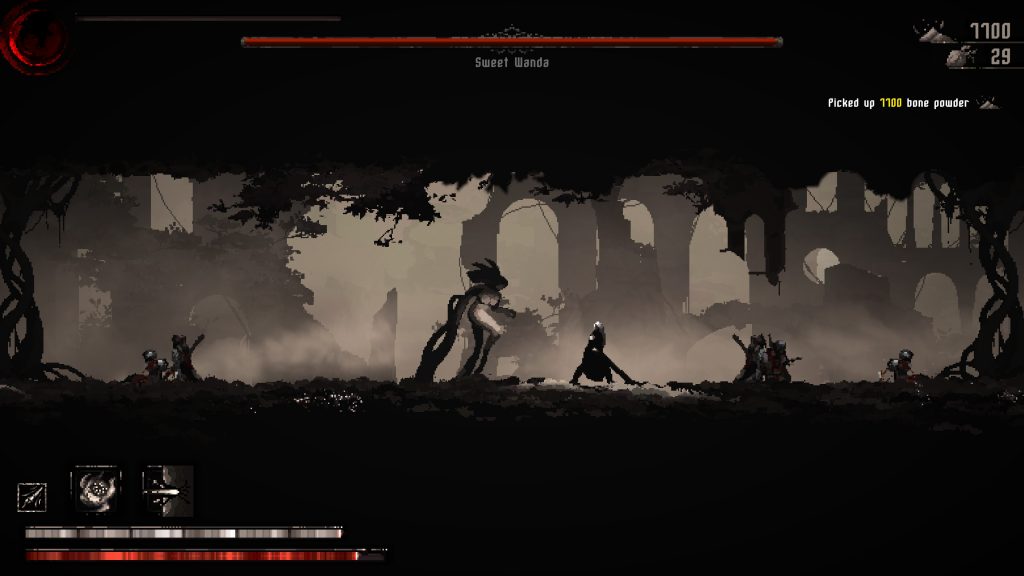 Cheesing may seem like the order of the day when it comes to doppelgangers, but I can’t say that this has ever been the case regarding the game’s climatic boss encounters. These opponents are multiphase aggressive impediments that will likely put your use of parries to the test. Annoyingly enough, I didn’t find the use of special attacks as valuable in these encounters as I did in the normal battles. That may have been due to a combination of my favorite special, the poison mist, not damaging them, but I ended up finding it safer to conserve my ichor bar for crucial healing. Even still, each battle became a series of repeated deaths – each one teaching me more and more about the boss’s behavior and mannerisms so that I could eventually return and triumphantly trounce them in a vigorous exchange of blows. Defeating bosses, as well as meeting new characters, will reward you with an item called a memory. Most of the time, these can be sold to a particular NPC for bone powder and character insight, but some of the time, they will reward you with a new ability to aid in world exploration.

This game does not pull punches on its difficulty, whether it be due to its beautiful but trap-laden environments or its very aggressive enemies strewn throughout the land. But if the difficulty is the only thing causing you to shy away from the adventure, then know that there are certainly ways to mitigate these hurdles. For example, the copious amounts of spikes strewn about aren’t just a detriment to your existence but also to those of your opponents. On more than a few occasions, I got a kick out of pushing or tricking a problematic enemy onto a prickly deathbed to meet their end. There are also a few equipable items that can either purchased or discovered that can help to make things better – most notably for me being an amulet that heals Irma when she performs a successful parry. Once I acquired that amulet, it remained on my person for a vast majority of the game.

In Spite of It All 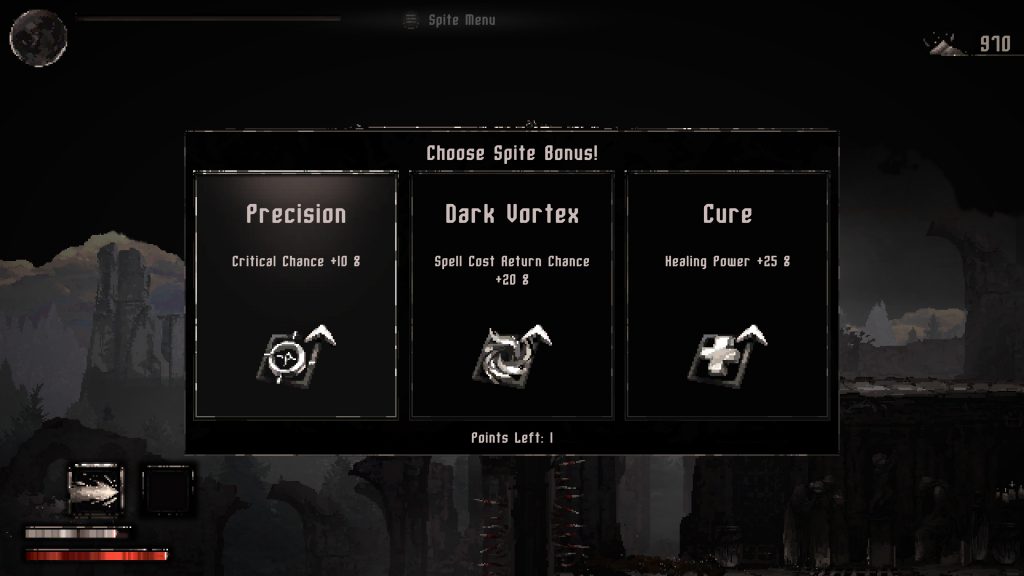 Unfortunately, this review can’t be a complete praise fest, as I did have a few personal digs at the game. Even though I enjoyed exploring the world and seeing what obstacle I would be faced with next, I never found myself to be particularly concerned about the plot. I’m not sure if it was the way that it was presented or if much of the terminology just went over my head, but I found myself mostly ignoring the overarching plot in favor of treating the characters as compartmentalized supporters or detractors. It obviously didn’t ruin the fun though having that added motivation to persevere would have been wonderful. Also, I wish that there were more of a traditional level-up growth system to the game. The game’s spite system allows you to learn a new perk for Irma after a number of kills, but these are only temporary buffs that go away either upon death or when generating a new doppelganger.

A Clayborne Work of Art

I came into Moonscars thinking that I was about to play yet another soul-like title in a game-scape riddled with them. I also found myself thinking that I’d grow bored with the title resulting in a poor but well-reasoned rating. Instead, Moonscars’ fluid combat mechanics, fun boss battles, and lovely art stylings kept me engaged and made me a believer that there is a lot more enjoyment still to be milled from the souls-like subgenre. Black Mermaid has molded themselves a familiar work of video game art that is also unique in enough ways to stand out as its own thing. It reignited my interest in the genre enough to want to revisit other games of this style, so I’ll take this game as the early Fall blessing that it is.

Of All The Roguelikes That Exist, This Is One Of Them Eh. It’s not that Rogue Stache is a terrible game, by any measure. The graphics are nice, everything…