Justice Sucks Review: It Sucks, But in the Best of Ways

Every now and then, a game comes along that you are just… not at all prepared for. After a few decades of gaming, it can sometimes feel as though I’ve seen it all, played it all (or at least tried it all), and that while there are many, many games that are incredibly enjoyable still being made, it’s increasingly rare that something stands out to me as truly unique. But then Samurai Punk came along with its stealthy action game Justice Sucks, and I… well, I was not ready for this insane, absurd, and addicting game. 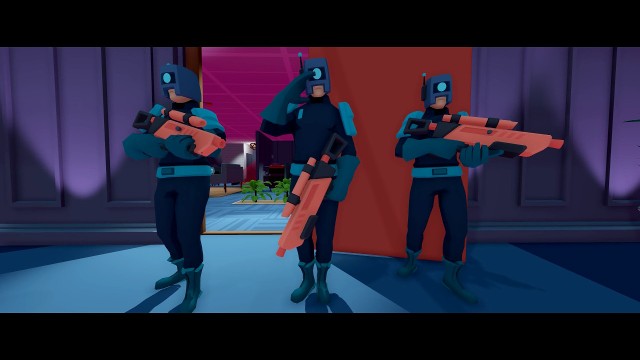 I was pleasantly surprised that Justice Sucks actually had a story. And an enjoyable story at that! Silly, certainly, but definitely enjoyable. You play as Dusty, a family’s strangely beloved roomba-style robotic vacuum. And when I say strangely beloved, I mean the family quite literally treats Dusty like a house pet, telling him how much he’s loved, wishing him good night, and more. And apparently Dusty loves them just as much, because the story centers on Dusty trying to save his family from evil clutches of the surprisingly punitive warranty squads of FamilyCorp. Sadly, your first attempt at protecting them goes pretty poorly, and you find your spirit (or I guess code?) trapped in the TV. Thankfully, you’ll meet your surprisingly hot virtual self who will help you train and develop the necessary skills to save your family. 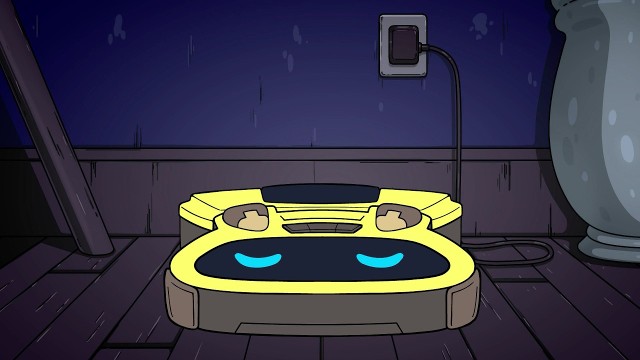 Gameplay in Justice Sucks is ridiculously addicting. Since you’re just a li’l robotic vacuum, you’re not exactly a juggernaut of justice. In order to successfully navigate through each level, you’ll need to learn how to lure enemies into areas where you can hack into objects to cause them damage. You can accomplish this a number of ways: you have an adorable li’l honk you can use to get their attention and draw them closer, or you can roll your way through their direct line of sight, in which case they’ll chase after you. They can attack and destroy you in just a couple of hits (you are, after all, just a small bundle of circuits and wires and plastic), so you’ll have to hide to stay safe. Thankfully, there are a lot of places to hide – beneath tables, couches, chairs, and more.

Once you’ve lured the baddies to where you want them and you’re safely hidden away, you can hack into nearby items. There’s a huge variety of things for you to hack into, such as ceiling fans, which will cause them to drop and smash your target; you can cause things to explode; heavy metal doors to slam shut, and much, much more. You can also combine traps, like water and electricity, which adds a fun layer of strategy.

Of course, since you’re a vacuum, you’ll be expected to clean up the mangled bodies left behind. And you’ll want to, as vacuuming up all the blood, guts, bones, and meat chunkins left behind will fill up a blood meter, allowing you to use special skills that will help give you an edge against foes. As you progress through the game, you’ll also unlock abilities and perks. Abilities require blood to use, and typically cause damage to enemies when used. Perks, on the other hand, are always in effect, and offer a wide variety of effects, such as turning invisible for a few seconds after taking damage, or getting some bonus blood to start each level with.

To keep things from feeling too stale, each level will have different goals. Rescue mission levels, for example, require you to actually rescue people, having them ride around on you and getting safely to an escape point. Elimination requires you to defeat all enemies, while during invasion, you need to kill wave after wave of enemies before they make off with all the valuables.

Don’t Roll the Dyson on Just Any Murder-Vacuum 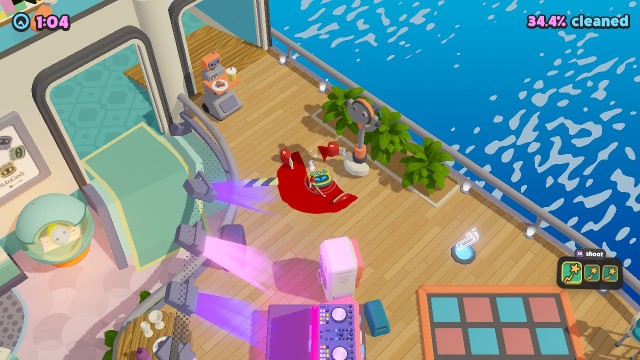 Justice Sucks is aesthetically charming. It’s got a sort of cel-shaded look to it that I always find delightful, especially when such a cutesy style is used on murder vacuums that suck up chunks of dead body and blood. The effects are quite nice as well, such as when you go into hacking mode and the color scheme changes, allowing you to quickly select what you’d like to hack into. The soundtrack is perfectly enjoyable, even if nothing in particular stands out – you won’t often find yourself humming along.

A Game That Won’t Be Left in the Dust

Honestly, there’s very little to fault with Justice Sucks. In fact, there are only two things I can honestly think of that stood out: first, the controls aren’t particularly intuitive, though they start to click after a while; second, the game is a bit on the short side, though it does make up for that by offering a lot of load out options with abilities and perks to make replaying levels entertaining. Overall, Justice Sucks is a solid, wild romp. It’s the vengeful, murderous rampage through the eyes of a Roomba that you didn’t know you needed. 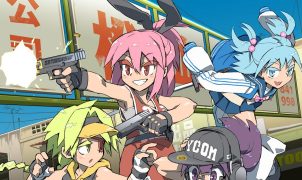