Prinny Presents NIS Classics Volume 3: Review: A Wonderful look at where it all began 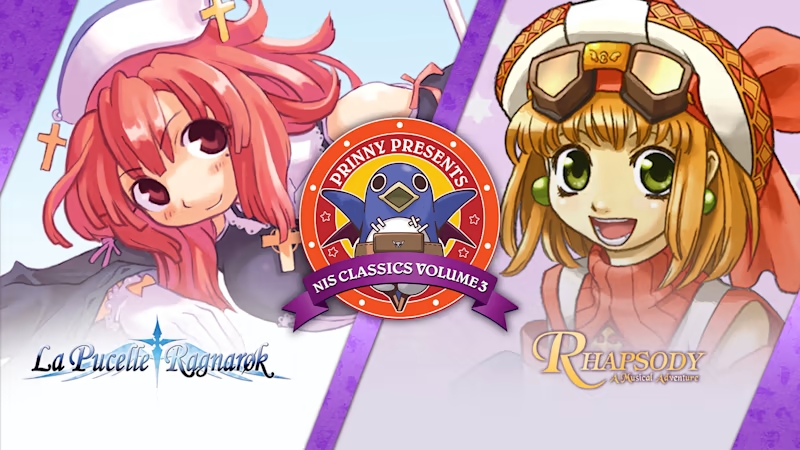 Nippon Ichi Software’s Prinny Presents NIS Classics series has really been doing a stellar job so far. Despite the company best being known for the Disgaea franchise, NIS has released a bevvy of wonderful other RPGs over the years, and this series has done well in ensuring that they continue to live on . Of course, there’s really no arguing that the company’s over-the-top, Netherworld-based tactical RPG series currently sits at the top and has for quite some time. I’m sure you already knew that, though—after all, the series has been running strong for, what… almost 20 years, now? What you might not be aware of, though, is that there were two games that came before the very first Disgaea—La Pucelle: Tactics, and Rhapsody: A Musical Adventure—that were key players in shaping Laharl & co.’s adventure into what it ultimately became. And, wouldn’t you know it, it just so happens that those two titles happen to make up Prinny Presents NIS Classics Volume 3! …Okay, well, technically, it’s La Pucelle: Ragnarok, and not the original Tactics, that made it into this game, but more on that later. 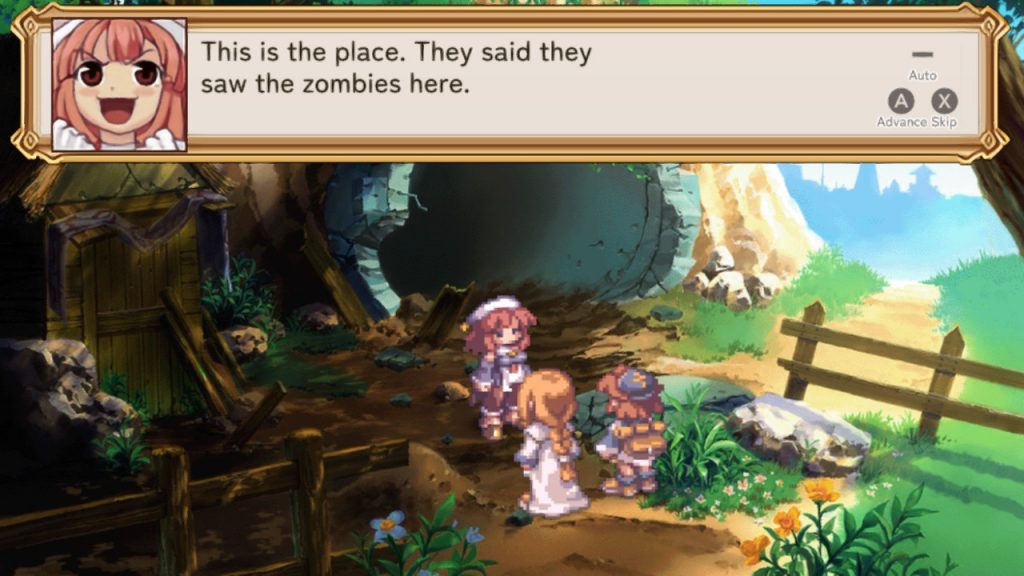 Hopefully, none of them are Zed… that might be a problem for a bunch of level 1 characters.

Any modern-day NIS fans surely know that the company tends to favor the dark and demonic—albeit often in a fairly whimsical and humorous manner—but you might be surprised to know that that’s not what the company was going after when they initially jumped into the SRPG market. On the contrary, they were essentially the exact opposite of what NIS’ flagship series ultimately turned out to be. The true “origin point” of the modern-day NIS SRPG is a was a game called Rhapsody: A Musical Adventure.  The game follows the story of a musically gifted girl named Cornet, who can also speak to puppets for some reason, as she journeys to save her beloved Prince Ferdinand from the clutches of the evil witch Majorly. It’s been a while since I’ve played an RPG that came from the ’90s, and Rhapsody’s story is certainly a product of its time—but only in the best of ways.

La Pucelle: Ragnarok—an updated version of La Pucelle: Tactics that was literally never released in the West before this year—feels much more familiar to Disgaea (which would only come out just a year later!) in just about every way. The game follows novice demon hunter Prier and her bother Culotte (talk about irony, huh?) as they begin their work for the Church of the Holy Maiden. Unfortunately, the Church of the Holy Maiden isn’t the only place of worship in town—a second church, named the Church of the Divine Mother, also exists. And, while that normally wouldn’t be an issue, this so-called “Church” of the Divine Mother has some ambitions that are ultimately less-than-holy… 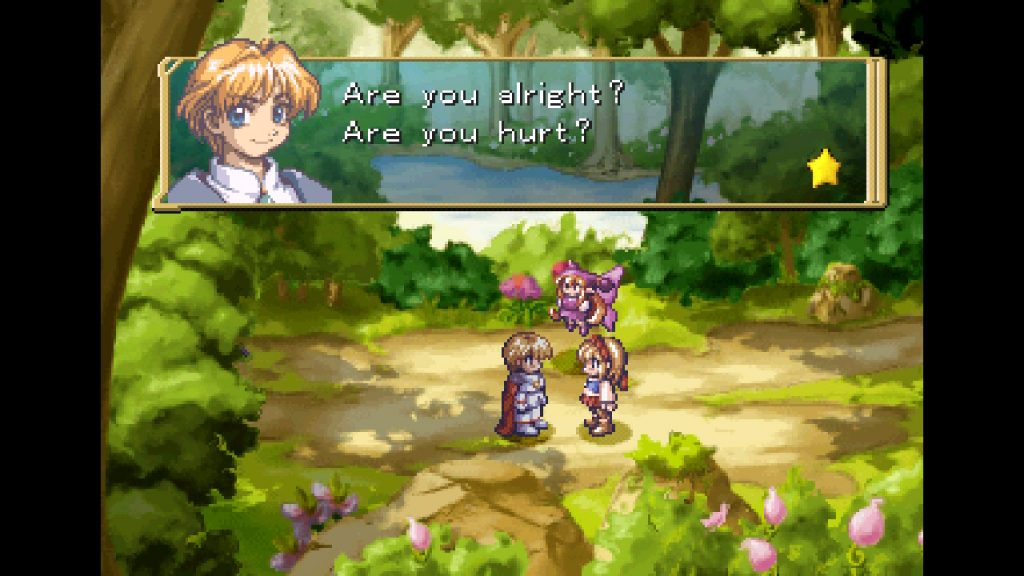 One enjoyable thing about looking into a game developer’s past is that it has the potential to help you understand how they are in the present. That absolutely holds true with Prinny Presents NIS Classics Volume 3. Though quite old at this point, it’s obvious from the very beginning that both Rhapsody and La Pucelle are NIS titles, and it was amusing to see how much more “NIS-like” the company had gotten as they went from the former to the latter alone—especially when it came to the game’s protagonists. I do have to say that it made me wonder why they ultimately decided to go from saving princes and slaying demons to, you know, being demons in terms of game design, but, hey, I like things the way they are now so I can’t complain. 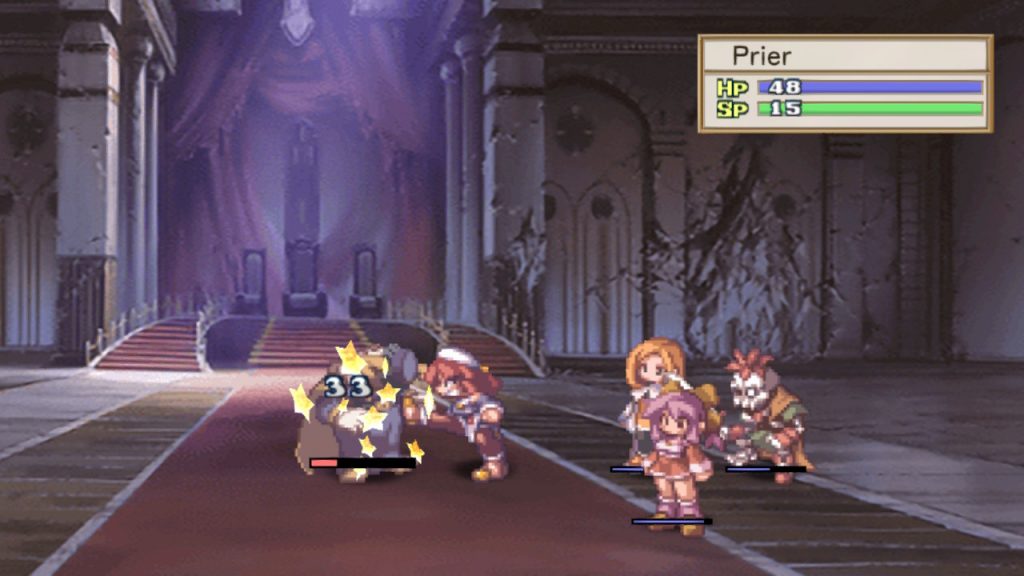 That’s, uh… that’s how we’re hunting demons now, is it?

I’ve pretty much been beaten to death because these two games are pre-cursors to the Disgaea series, but what does that even mean!? Well, that’s a good question, dear reader—and it’s one that I’m going to do my best to answer right now. Starting with the more relatable of the two, La Pucelle could very easily be called a “proto-Disgaea.” The game does boast certain unique mechanics that, to this day, have still never been used again—the Purification and leveling systems being the most notable in my opinion—but stepping into La Pucelle for the first time isn’t the same as, say, your first time with a game like Soul Nomad, or even Phantom Brave for that matter. If you’ve played Disgaea, you’re going to warm up to any differences (because, like I said, they definitely exist) in La Pucelle almost immediately. And, do you know what the best part? The game completely holds up after all of these years! So well, in fact, that it makes me wonder why we had to wait until 2022 to get La Pucelle: Ragnarok.

Speaking of which, the fact that we finally have La Pucelle: Ragnarok is absolutely fantastic! While the original Tactics is wonderful, Ragnarok finally gives us access to a generous collection of new content, the best of which (at least in my opinion) being the Overlord Prier storyline. I don’t know about you, but I always thought her inclusion as an Overlord in the Disgaea games was a little strange given everything that happened in this game, but the additional story actually content actually sorts things out a little bit. Ragnarok also includes some extra characters for players to use in their party—with one being none other than Rhapsody’s own Cornet herself! 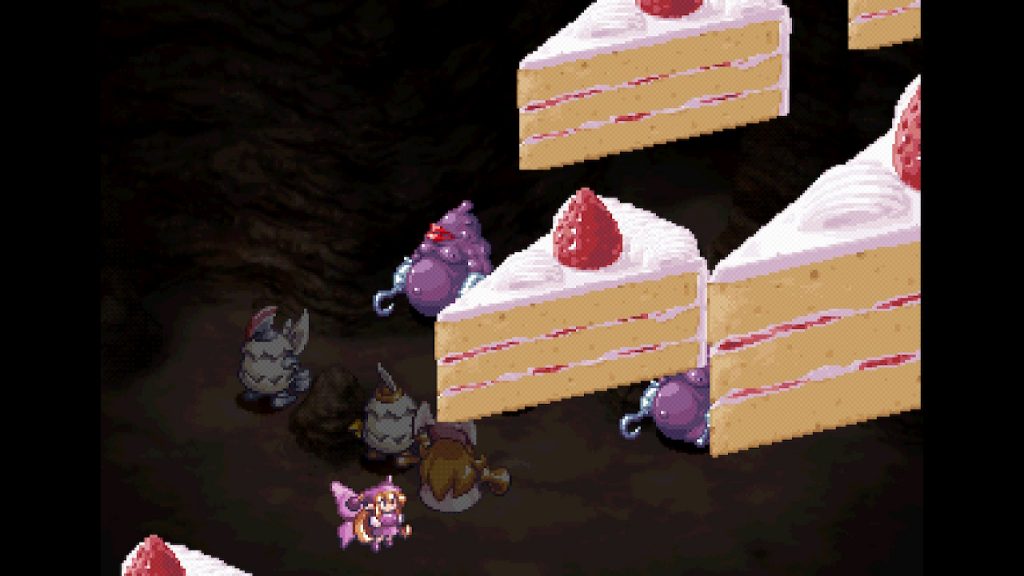 It’s nice to see that weird AoE attacks have always been a thing.

Stepping back even further, we have Rhapsody—and this is where things start to feel a little bit strange. If you really want to get technical, this game isn’t a fully-fledged SRPG. It’s somewhere in the middle of a traditional JRPG and an SRPG. For the most part, the game plays out like a traditional JRPG—albeit a simplified one—complete with towns, dungeons, and even a world map! Things get a little wonky when it comes to combat, though. While fights are initiated via random encounters, the fights themselves aren’t turn-based like you’d expect but are mini tactical battles! It’s, uh, yeah, about as weird as it sounds. But it actually works out surprisingly well. The areas in which the battles take place are extremely small—meaning that you and your opponents can reach each other in as little as a single turn—and the monsters are actually designed to work more like they’re in a traditional JRPG, meaning that they’re fairly easy to kill off. It does get a little repetitive, and I’m not sure that I’d want a 50+ hour-long game to work like this, but it suits a smaller journey like Rhapsody just fine.

There’s also something to be said about the music in Rhapsody—after all, it’s not called “A Musical Adventure” for nothing! Rhapsody goes above and beyond simply making the theme of the game “music” and incorporates original lyrical pieces into the game as well. These pieces aren’t phoned in, either—both the Japanese and English singers did a phenomenal job on their parts, and it was a joy listening to them. While having characters in a video game sing might not be a big deal in today’s age, I’d argue that incorporating multiple, unskippable (I mean they’re good, so I don’t know why you’d want to do that anyway) songs into an RPG is a pretty bold move for a late-90s video game. Even now, I’d say that a decision like that helps Rhapsody stand out as being a truly unique JRPG.

While the two games featured in this collection might feel a bit dated at times—mostly Rhapsody—there’s no denying that Prinny Presents NIS Classics Volume 3 is a wonderful and entertaining look back at where NIS’s journey into the world of SRPGs all began. Given that NIS is running through their old stockpile rather quickly I’m not really sure where they’ll go with Prinny Presents 4 (if there is one). Maybe we’ll get a new localization? Who knows. Either way, I’m looking forward to it!

The legacy lives on! Some games just belong on particular platforms, and Alwa’s Legacy feels right at home on the Switch. A colorful retro-inspired title that can’t decide if…