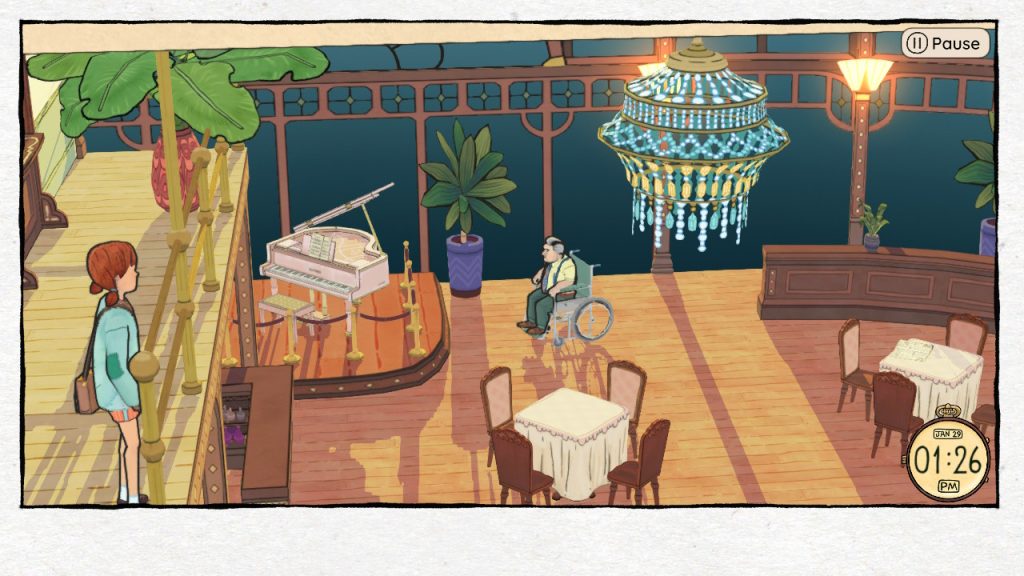 If I had a nickel for every time I opened up a review with a story about how I used to help my father in nursing homes, I’d have 3 nickels. Which isn’t a lot, but it’s weird that it’s been applicable 3 times now (Spiritfarer and Gerda: A Flame in Winter are the previous 2 instances for those curious).

But it’s never been more perfect than with Wayward Strand, a wholesome, narrative driven title about a young girl named Casey spending a weekend in an old folks home, helping her head nurse mother by keeping the patients company. Where mine and Casey’s stories differ, however, is that my feet were always planted firmly on the ground while Casey’s escapades with the oldies were in the clouds on an antique airship. Developed and self-published by Ghost Pattern, Wayward Strand encourages players to “explore the interwoven lives of the patients and staff” and to “discover something new on each and every playthrough.” 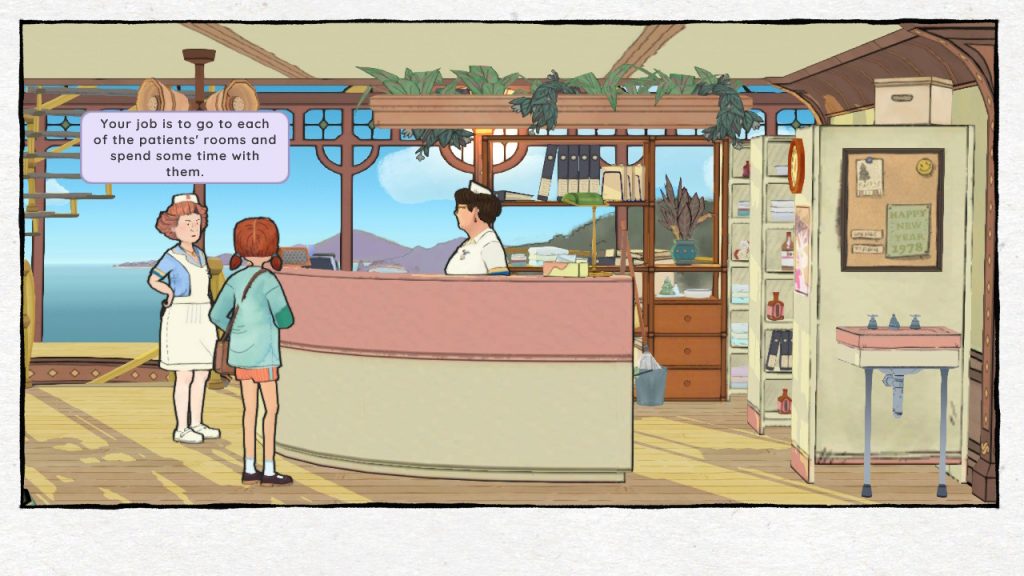 As stated above, Wayward Strand features Casey, a 1970s Australian teenager with her nose perpetually stuck in her journalism notebook, on an assignment to assist her mother. Her mission? Keep the patients company for the weekend so the staff can prepare for an important event. The hospital is shorthanded, you see, and the old folks need a bit of attention while the rest of the team runs around making sure the place is spic and span. Always on the lookout for a lede, Casey takes it upon herself to investigate the airship, its history, and, of course, its inhabitants to come up with the best possible article she can.

The first thing that I noticed about Wayward Strand (aside from the floating airship, of course) was the art style. It’s bright, inviting, and refreshing — often the polar opposite of a convalescent home from my experience. I guess the patients here are paying top dollar to stay afloat, but then again, your money went a lot further in 1978. I really appreciated how almost saccharine sweet the art was, making a normally less-than-thrilling experience all the more interesting. 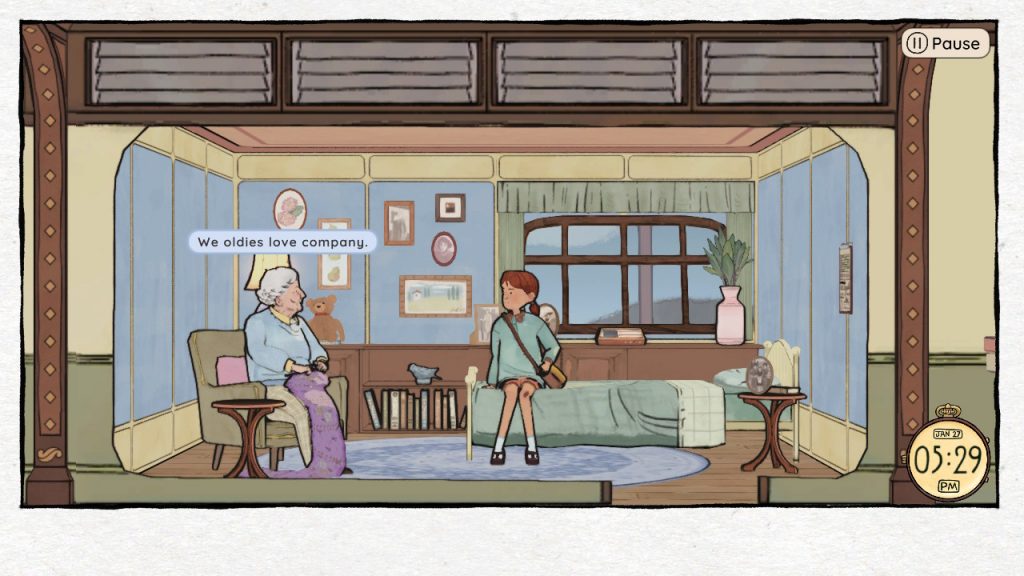 When it comes to gameplay, Wayward Strand will excite curious minds. The game spans an entire weekend from shift start to shift end, so keeping Casey occupied for hours and hours each day means a lot of running around and talking to people at random times. It would be unwise to assume a nursing home is boring, especially when you’re a journalist — Casey will spend much of her time asking some pretty personal questions to both patients and staff alike, such as family history and any ailments, but also dig into the history of the airship itself. Be judicious about where you spend your time, however — chilling with one person might mean you miss something going on with someone else. What kind of article will you help Casey craft?

Of course, having literally lived the experience of keeping old folks company to help a medical professional parent for the majority of my youth, I was obviously interested in what they “got right,” and I’m happy to report there’s plenty. For one, the patients themselves, while diverse in their actual needs, are your standard patient archetypes that I constantly encountered. There was a non-verbal patient who didn’t speak or react to people but kept a lovely garden and enjoyed being talked at. Then there’s the patient who couldn’t remember conversations had only minutes prior and was highly suspicious of the staff. My favorites were the nice old lady who just loved to sit in her room and knit and the razor sharp elderly man who kept tap tap tapping away at his typewriter. As far as realism goes, I figure they captured the feel of a mixed assisted living / nursing home fairly well. 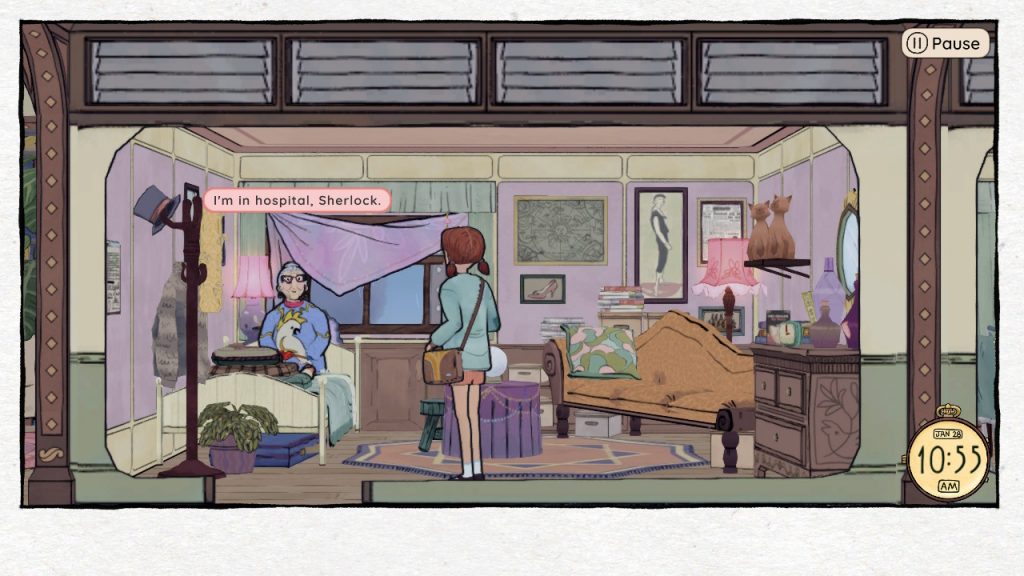 While I found Wayward Strand to be a delightfully wholesome experience that knocked at the door of something a little deeper in terms of aging, death, and dying, I feel like there was room to better drive home those sentiments instead of tiptoeing around them. Additionally, I felt the ending to be a bit anti-climactic; Casey spends all her time taking notes for this alleged article that we never get to help her write or at least see, which was a bit disappointing considering she spends the entire weekend taking notes for it. Had it not been for the overarching storyline of a mother and daughter learning how to navigate their relationship as Casey comes of age, the entire thing could have fallen flat. Had there just been a little more payoff at the end of it all, I think I would feel compelled to play a second time.

In truth, that’s what Wayward Strand hopes you’ll do — this isn’t a game you just play once and move on. To get the most out of Wayward Strand, you should play it a minimum of two or even three times to learn as much as you can about the mysterious airborne hospital. How did the airship wash up in Australian skies from its European birthplace? Who is the mysterious VIP coming to visit? Why did a staff member suddenly quit? How does everyone feel about the death of a beloved patient? There are so many questions to answer, and it’s impossible to learn everything in one go. Seeing the credits role in Wayward Strand is an invitation to pick it up and play it again to truly get to know this whimsical yet somber place.

Wayward Strand is less an active experience and more like sinking into a comfortable, worn couch. At first, you find the seat to be relaxing, but as time goes on you find yourself sunken into its cozy depths, all desire to move from your resting place evaporated. The floating hospital becomes its own character, just like the colorful cast that resides within; soon, your goal to see the game through becomes less important than learning all you can about the airborne convalescent home. If you’re looking for a game that places more importance on the journey instead of the destination, Wayward Strand welcomes you aboard.

Full disclosure: This review is based on a copy of Wayward Strand provided by the publisher.

Deadcraft Review: Zombie Nation   It feels like not a week goes by where there isn’t a new survival game dropped on some system or another. Similarly, zombie games…