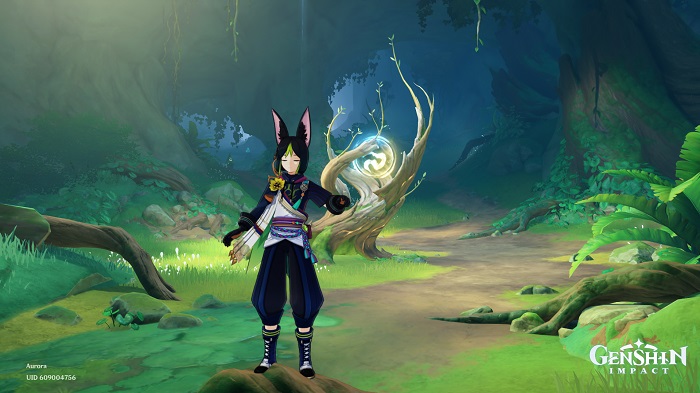 First off, you’ll want to head over to the designated location to meet up with Arapandu. 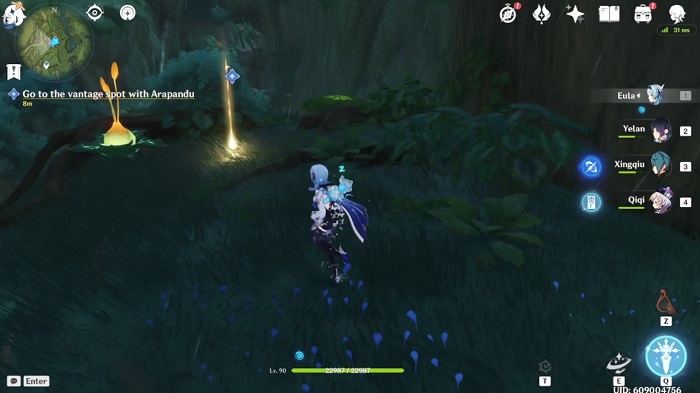 Your goal here is to repair the Varuna Contraption, but as you might expect, that’s a bit more complicated than you’d think. The first thing to take care of before we get to fixing things is to take out some Fungi hiding out in the nearby trees. 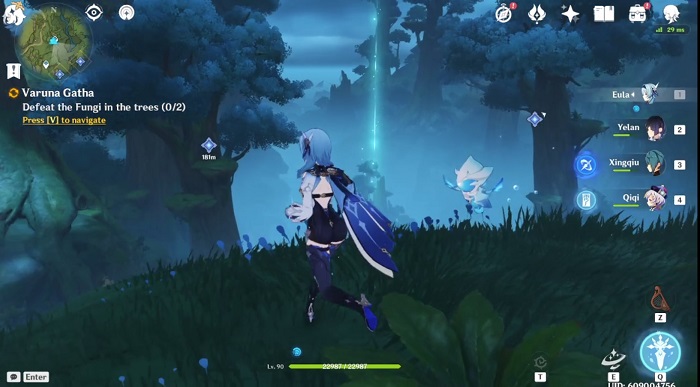 It can be a bit tricky to reach the other two trees, but when in doubt, use some Electro on the nearby mushrooms to get a little extra loft, and don’t be afraid to climb further up into the tree branches to get some height. Also, when fighting the Fungi, my advice is to use Cryo and Hydro to keep them still while you beat on them. Keeps them still and you from potentially getting too close to the edge and falling off.

The next thing you’ll need to do is head to a rest stop, where you’ll see Arapandu and a strange set of stones about. The primary gimmick for this quest series involves this statue. There’ll be turnable statues that you’ll need to have facing a main statue, and they’ll all be hinted at by traces emitting from the main statue, so you’ll have an idea of where the smaller, moveable statues are. 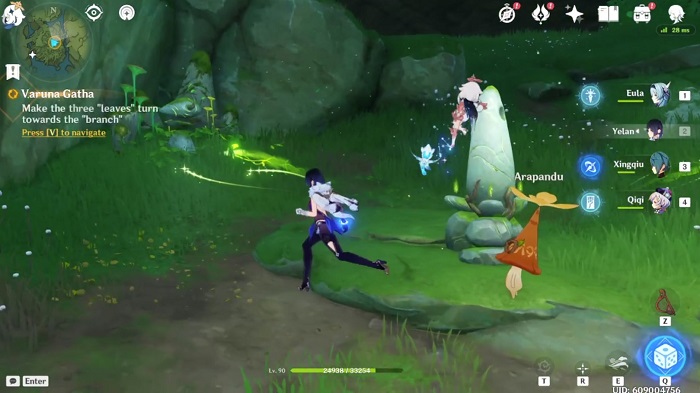 The next one you’ll be heading to is at the Yasna Monument. You’ll be looking for Aranakula. Thing is, he’s kinda playing hide and seek. 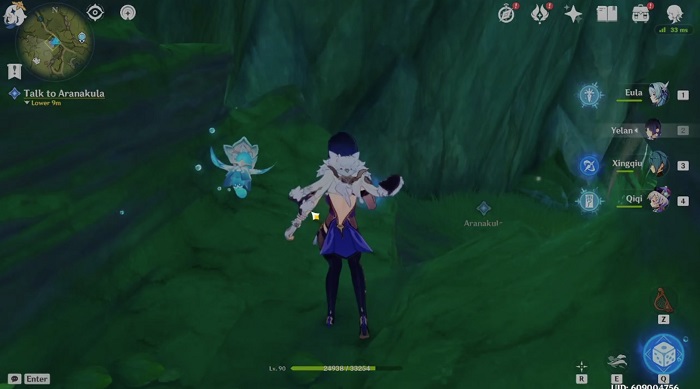 After the dialogue’s done, you’ll find him hiding near the other side of this fallen tree (you can just barely see his name there, a little to the right of the middle of the picture). You’ll need to guide this little guy away from the various enemies. The path forward is pretty simple, just give the Fungi a wide berth, and you should be able to move forward without issue. Next, you’ll work your way up to a shrine coated in strange spores. 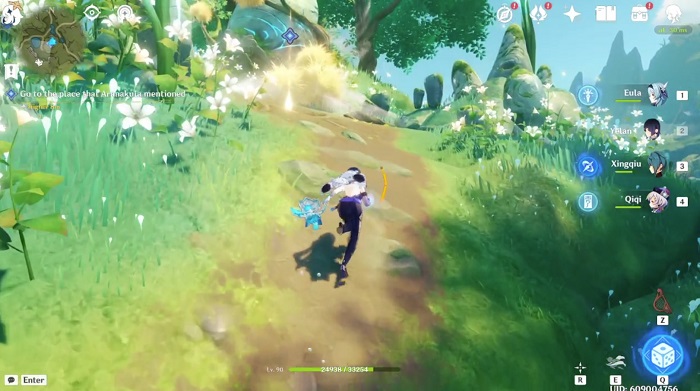 Once you clean all that up, you’ll head off to do some statue situation solving, so head down below to a little hole in the mountain. 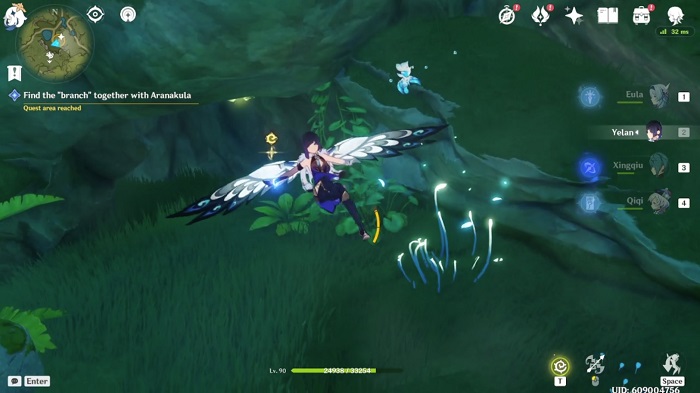 Get them pointing toward the main statue, and you’re good on this one. 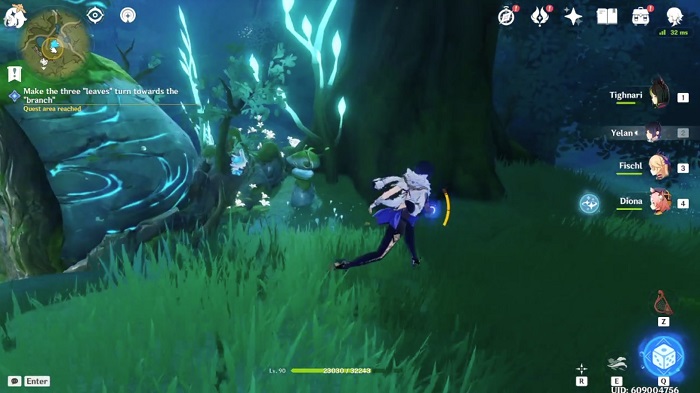 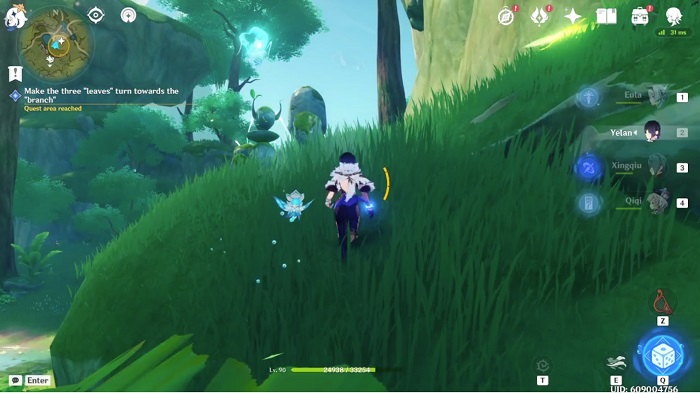 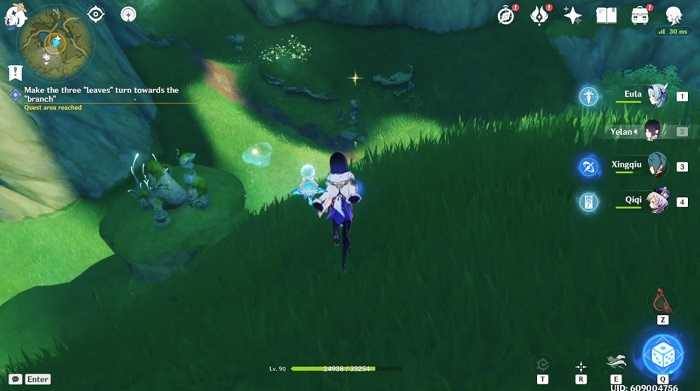 With all of those pointing in the right direction, we can move on to the next one. 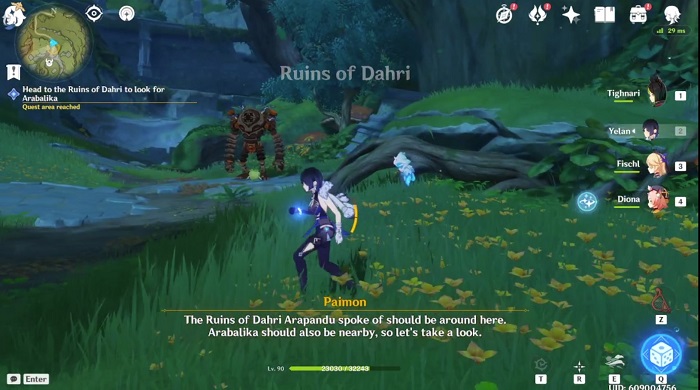 The next Aranara you’ll be talking to is Arabalika, and he’s a little more combat-focused. When you meet him, he’ll have you take down three Ruin Guards to prove yourself to him. After that, he’ll show you the switch to finally drain this ruin of water. 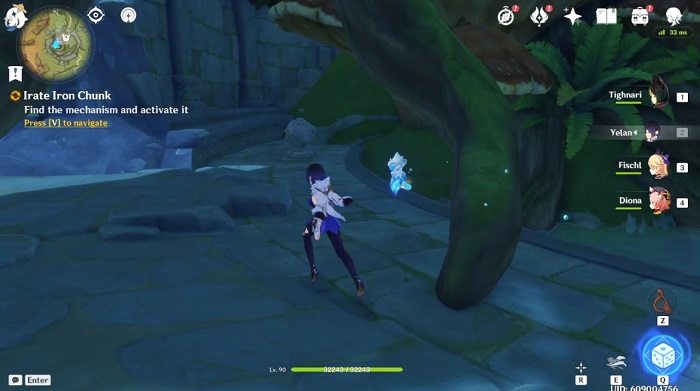 Meet Arabalika down at the bottom, and you’ll see the main statue with the little statues very close nearby, two near the Ruin Graders and one near a half-buried Ruin Guardian. They’re all within visible sight.

The thing is, you get this all fixed up, and you’ll have a bit of a fight on your hands. Kill off the Ruin Grader, and this one is rather quickly finished, leaving you on to the last one. 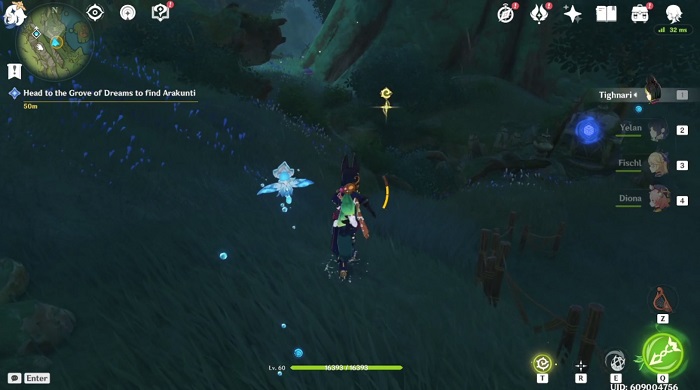 The last of the bunch is to meet up with Arakunti, who’s a bit deep underground already. Once you find this hole, follow it until you are prompted to play a little music for our new friend here. 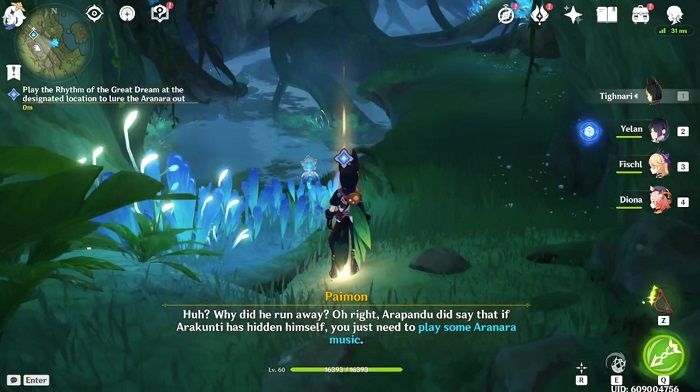 He’ll lead you up to the “branch” that’s going to serve as the main statue for this area. But the little turnable statues aren’t exactly in this realm. Instead, they’re in the dream realm, so use the Lyre in front of the Silapna pictured below. 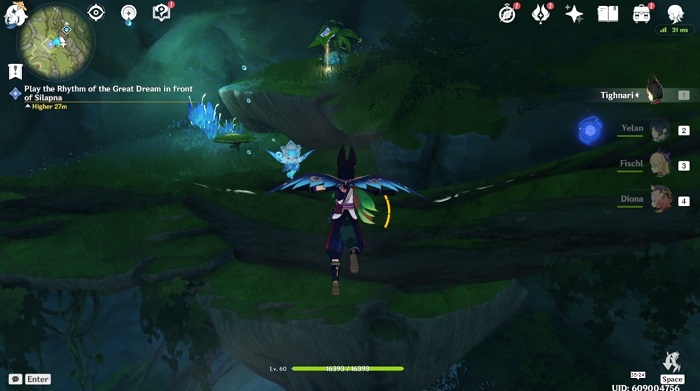 Now you should be able to follow the traces and find the turnable statues! 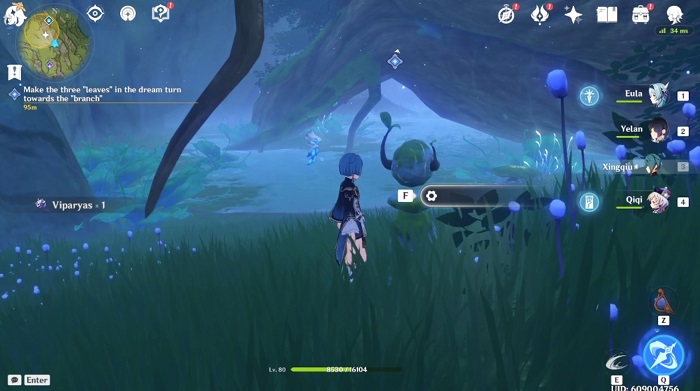 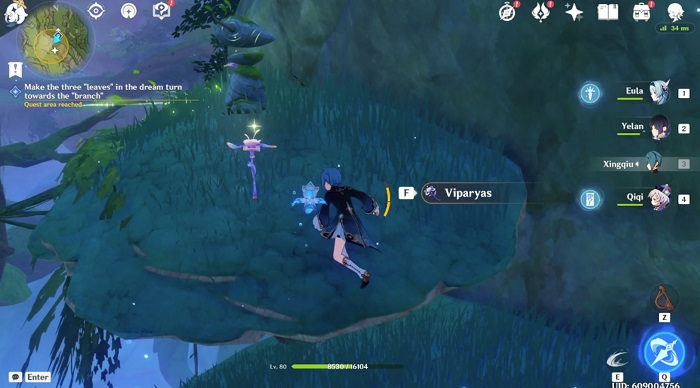 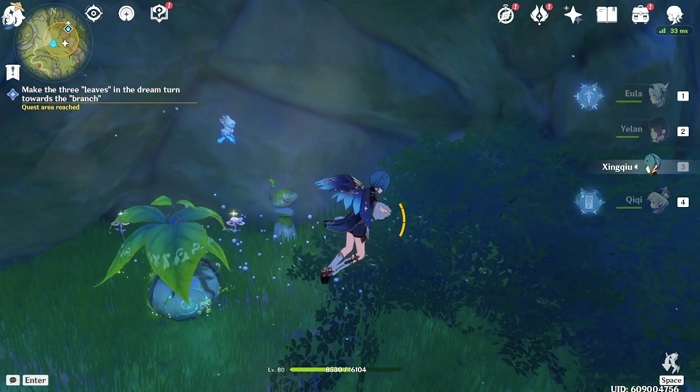 Head back to the normal realm via the Silapna, and meet up with Arakunti, who now has this side of things under control.

A Prayer for Rain on the Fecund Land 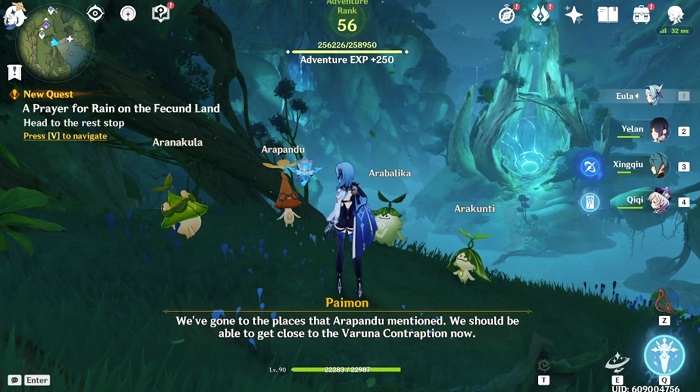 We’re on to the last leg of the race here! Meet up with Arapandu and get ready to head into the Varuna Contraption. Watch your step; it’s a long way down. Get comfortable. You’ll be here for a few minutes down at the bottom. Then, head into the depths, and you’ll see the root cause of the Varuna Contraption not working. Step through the dialogue, interact with the spores, then have fun letting loose on a Disturbed Fungus. Don’t worry about killing it just yet, it has no desire in letting you end this little plague so soon. 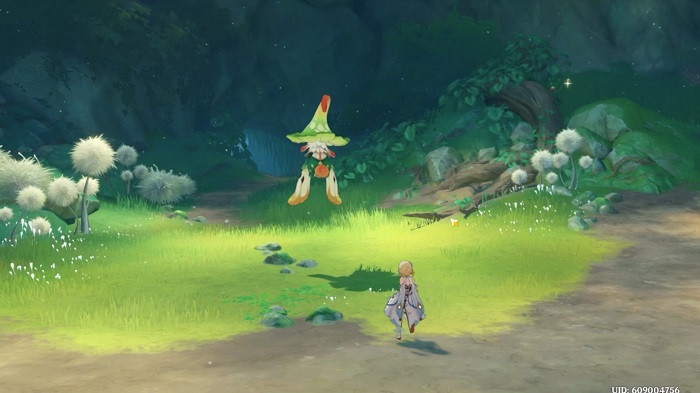 Follow the Fungi down the cave ahead. Watch out in the place you’ll be fighting him at, there’s a lot of Electro crystals and some ankle-deep water. Keep beating on him, and you’ll have another cutscene of him dashing deeper into that particular cave.

Again, be cautious when you meet up with him again, you have a room full of mushrooms ready to spit out clouds of damaging Dendro. Just watch where you step when you continue beating the life out of that floating Fungi. 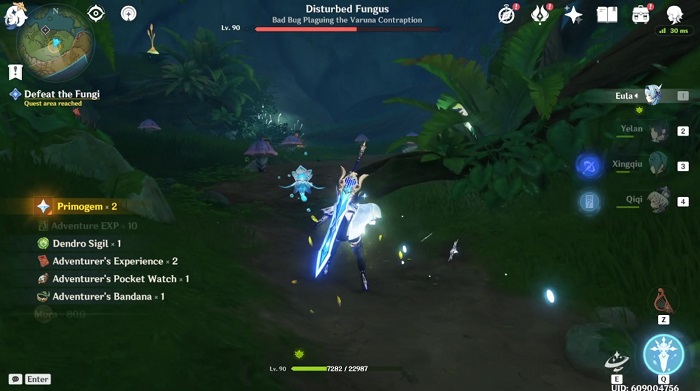 Good news, you’ll follow it back to the original cave, and you can finally finish this thing off. With that done, you’ll get to chat a bit more with the Aranara, then you’ll have the quest cleared. But that’s not all! Should you ever find yourself near the Varuna Contraption, you can change the weather at will! 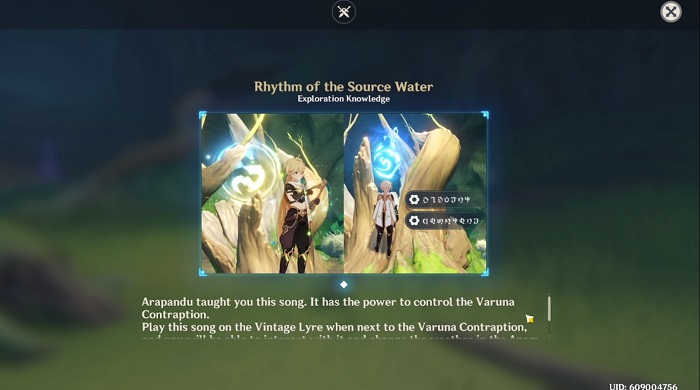 Okay, admittedly, it’s mostly just cosmetic and for fun, but it’s really neat that this is even a feature at all. So with that done, you’re done with the Varuna Gatha questline!

Should you need access to the other subquests for Act 2 of the Aranyaka questline, you can visit that here: 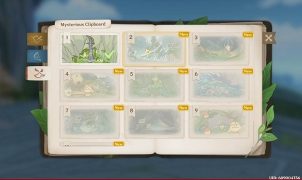