The Fruits of Labor 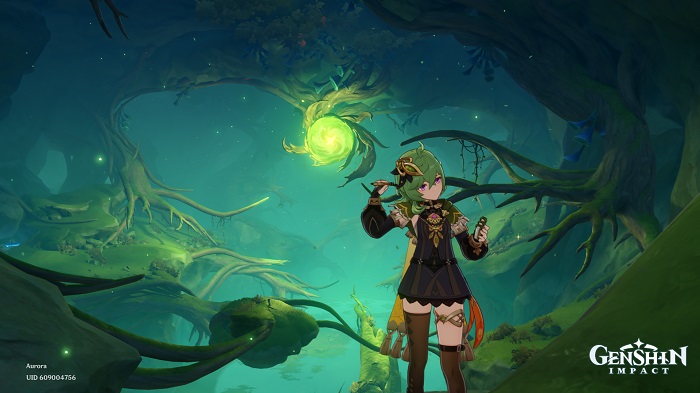 Greetings Travelers! Today we’ll be taking a look at the Agnihotra Sutra subquestline, needed for the completion of Act 2 of the Aranyaka questline. As expeYou’ll be playing with some special kinds of fruit this time around that’ll reveal the purpose of a few environmental mechanisms scattered around Sumeru! 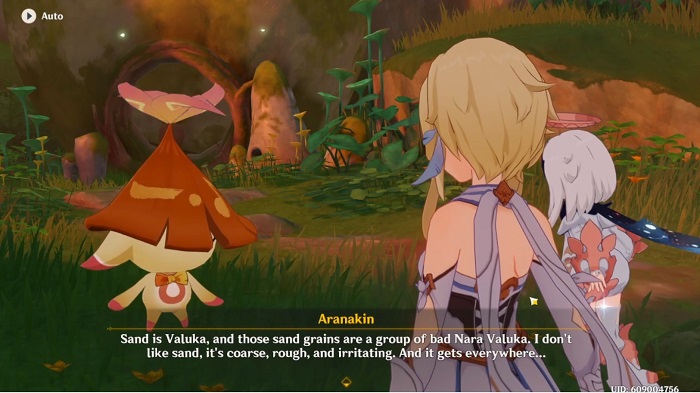 This one’s easy to start, because the little fella’s right next to the Statue of the Seven for Gandharva Ville. After some dialogue, he’ll give you a “Kusava,” which is used to summon some of the Aranara to help with some environmental mechanics of Sumeru. Make sure to have it equipped, then head over to the broken Dendro Totem. 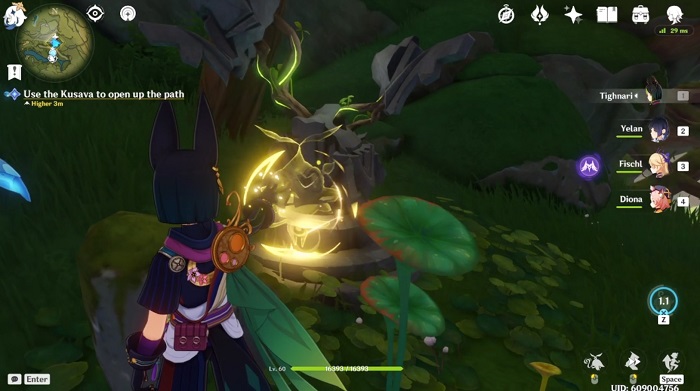 You press and hold the Gadget button with the Kusava equipped, and you can have your new Aranara friend repair the Totem. Time to head a bit deeper into the cave. Your next task is to drain the water level for that cave. You’ll need to head up to the island on your left and fix a Totem with your Kusava. 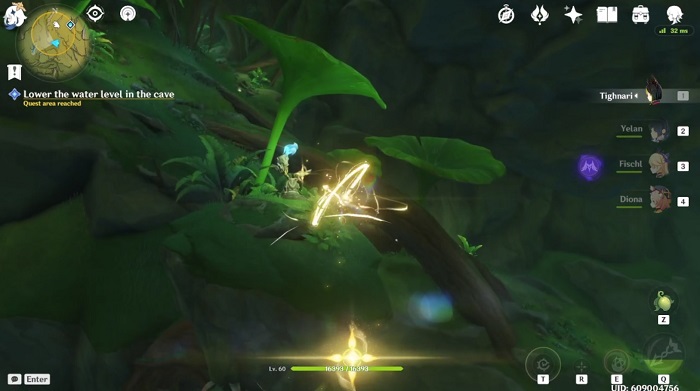 Don’t forget that you can hit the little yellow flowers with the three feelers attached to it with the power of Dendro to make some Four-Star Sigils so you can get around easier. 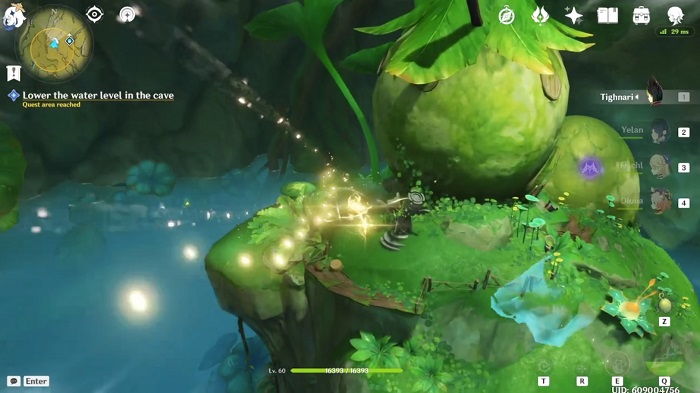 Once you drain the water level, the mushroom you’re looking for is directly below the island where the last Totem is. Once you examine the mushroom and go through some dialogue, you’ll be led out of the cave. Once you’re out, head a bit down the path, and you’ll see another cave entrance with some people blocking the entrance.

Talk to them, and they’ll get out of the way. Then, you’ll head deeper into another flooded cave where you can lower the water level by fixing and activating a Totem.

Once you’re done with that, head over to the suspected mushroom. Get through some dialogue, and you’ll need to break a seal over the mushroom, so let’s start by heading over to another Totem to continue draining the water from the cave. One of the flowers is hiding behind a destroyable wall, so grab some nearby Dendrograna and hit the wall with the green sigil to destroy it.

There are three broken stone statues that need the Kusava to repair them. Two are in the image above, while the last one is at the end of the cave, as shown in the image below.

You’ll get ambushed by some Eremite assassins once you’re done, so take them out right quick. Attempt to grab the mushroom, and you’ll find that it’s gone now, so head out of the cave to find the guys blocking the cave entrance earlier, trying to escape. Mind the traps on your way out. After some dialogue, you’ll be done with this chapter, and so on to the next. 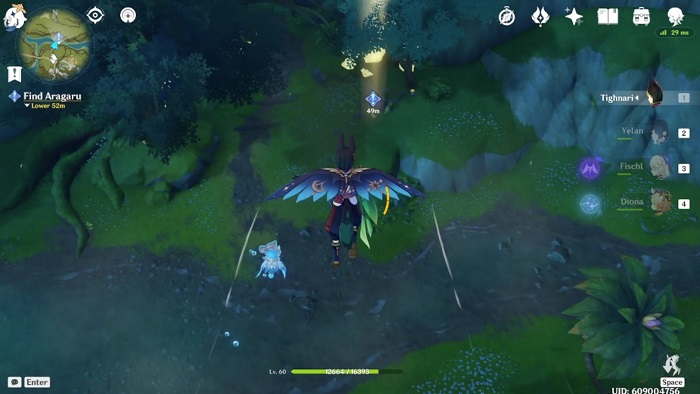 This chapter starts just north of Sumeru City, across the river.

Get some dialogue done, and then head further into the cave to get access to Aragaru’s ability for the Kusava fruit. 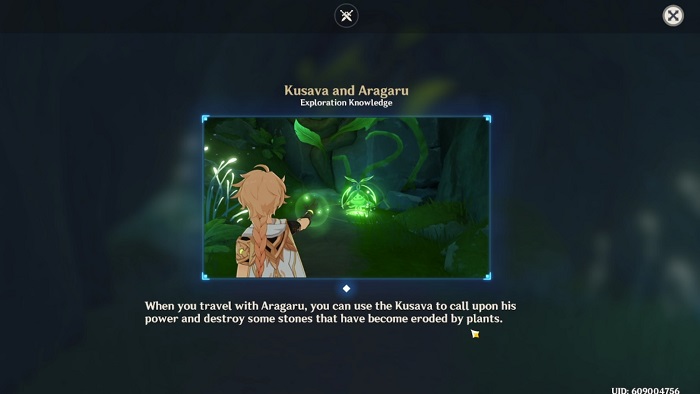 He can break down barriers with green markings on them. Head further into the cave, and you’ll see some runes with some shrooms. 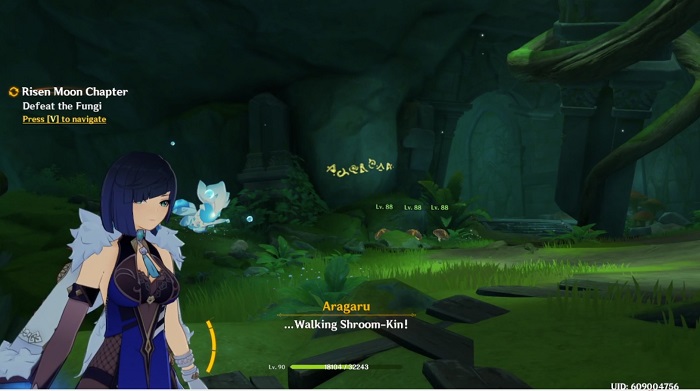 Defeat the Fungi, go through some dialogue about the runes, and you’ll be off to find two other sets of runes. The first one is just a bit further into the cave. Pay attention to when Aragaru speaks. He’ll alert you when you’re near a wall you can break with the Kusava fruit. You can see in the image below where you need to use him. One of the runes will be in there. 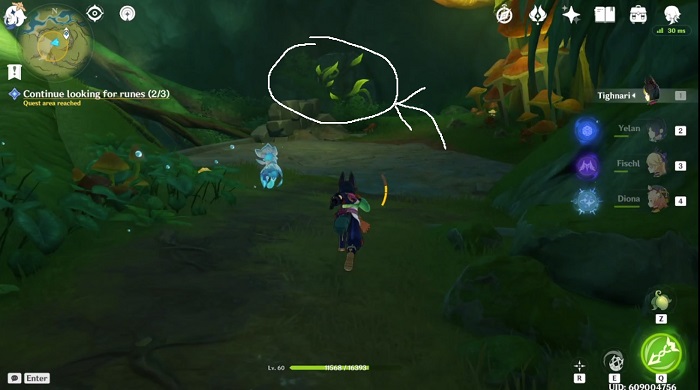 Once you’re done with that wall, head up the branches where another wall will need to be busted down. 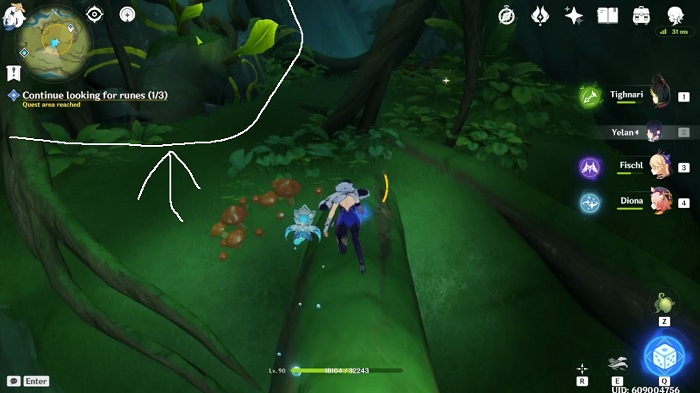 Chat with Aragaru. He’ll lead you out of the cave, and then you’ll be heading to another location. After a brief discussion with him, you’ll have a deep hole to go jump in. Once you’re into the ruins, you’ll need the Kusava once again to break the seal on the Barsam Flower. When you get near the smaller cave entrances, Paimon will point out that you should wander down them to look for where the Kusava fruit’s needed. 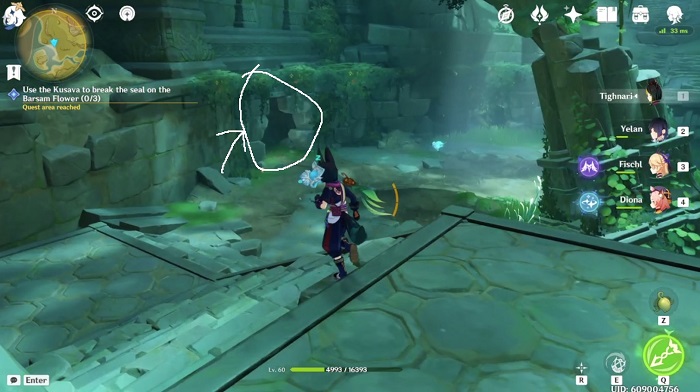 The first one will be hiding in one of the breakable walls in this hall. I’ve circled the one you need to open. 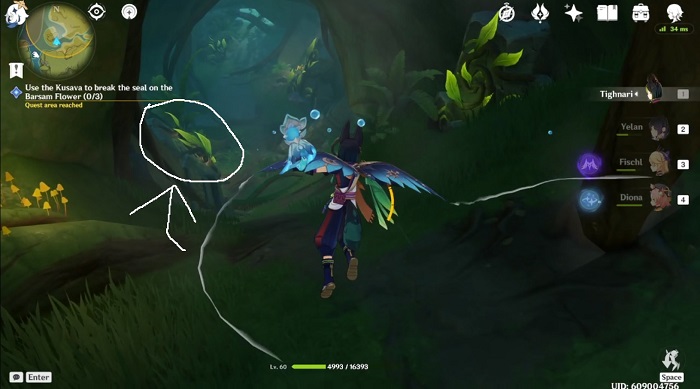 Get to the end of the tunnel there, and you’ll see there are some vines in the way at the end. Destroy a wall nearby with the Kusava fruit to reveal a Dendro Totem that will move the vines out of the way. Don’t forget to follow the Seelie back to its pedestal as well, getting two Seelies is necessary for dropping the barrier to the deeper parts of the cave. 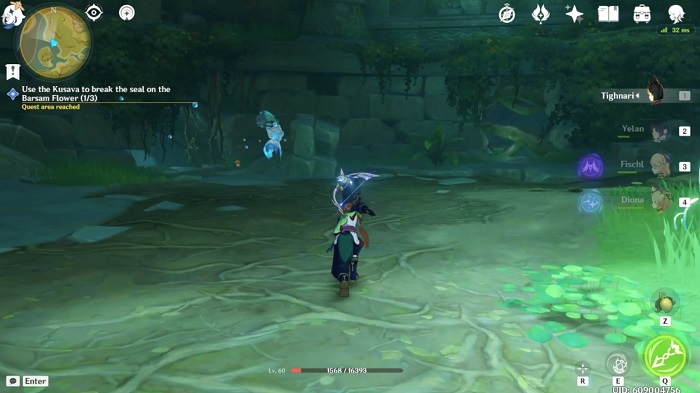 Follow the cave in the left part of the image above, and towards the end of it, you’ll see this little sunlit grove where a destructible wall is at. 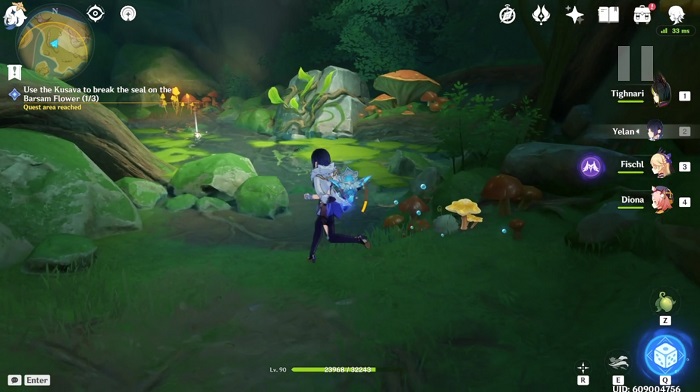 That’s where your second seal is, so break the wall and touch the seal. Head back out of the cave, and don’t forget to follow the Seelie to its pedestal. You should now have two out of the three seals and have the barrier forward dropped. At the end of this newly revealed part, you’ll see some Ruin enemies guarding the last destructible wall. 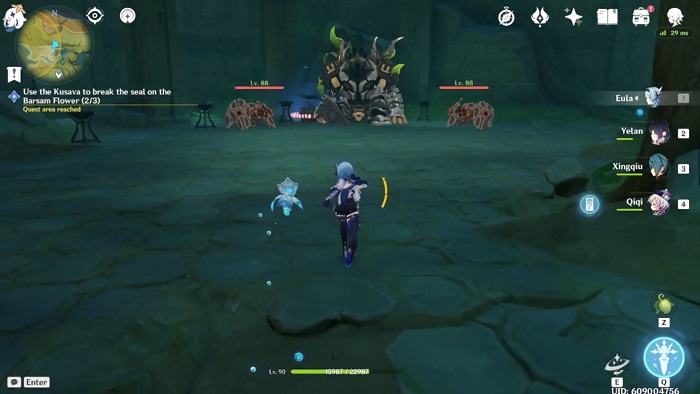 Dispatch the enemies, and break the wall for the last seal. Now head over and claim the Barsam Flower. 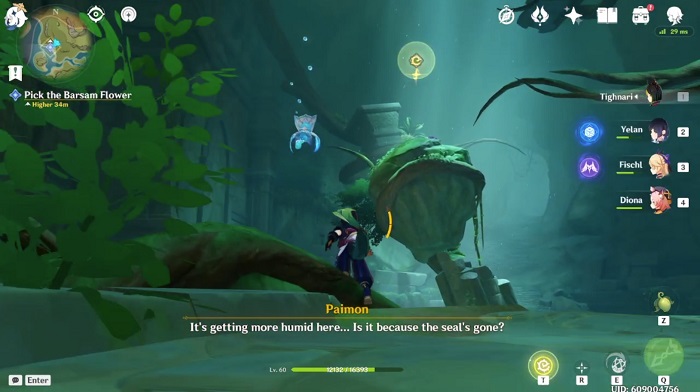 You’re done now with this part, so on to the final quest of this series. 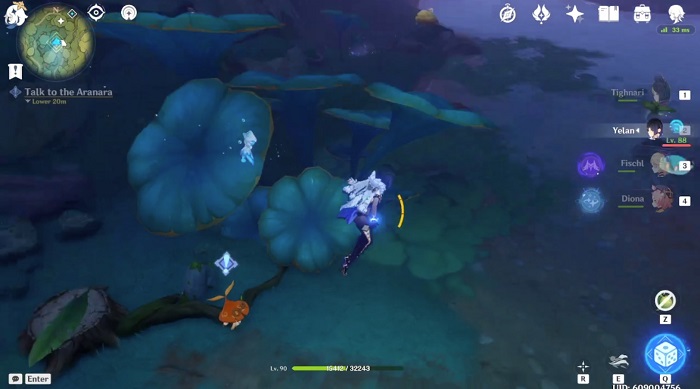 Aranaga is the last Aranara you’ll meet in this adventure, and he’s over with the giant glowing shrooms in Mawtiyima Forest. 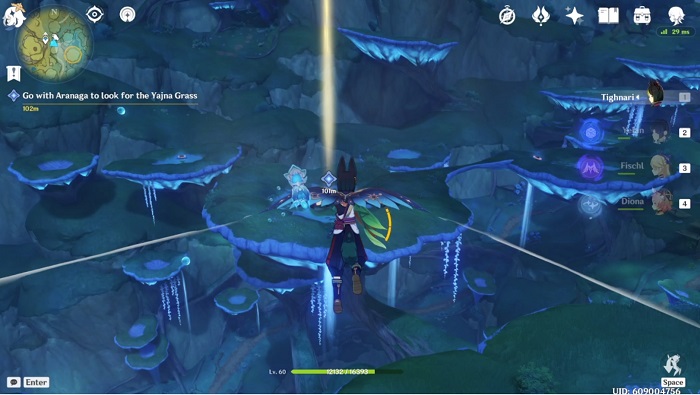 When you get to one of the mushrooms, you’ll be taught how Aranaga interacts with the Kusava. 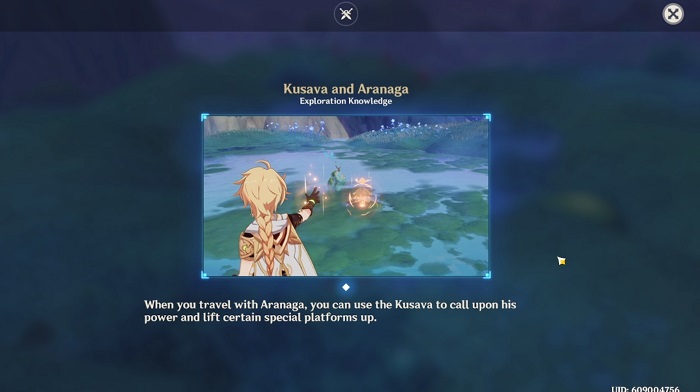 He can lift platforms; pretty simple. Actually, this whole segment is much simpler than the last. Just hop from mushroom to mushroom and raise the platforms where needed. Once you’re done with the seals, head over and claim the Yajna Grass.

You’ll need to head over to the little garden our Aranara friends have gathered at and talk to them. After some dialogue, you’ll need to wait until 23:00 – 01:00 on the clock. Work through some more dialogue, and now you’ll be sent off to a spot nearby to offer up the elixir you’ve concocted with the Aranara. You’ll see where you have another hole you’ll get to drop down nearby, so watch your step.

With all three of these Aranara with you now, you’ll have access to all three Kusava fruit abilities. You’ll notice now when you have the Kusava fruit out. You can now swap between them (shown as “E” down at the bottom right). 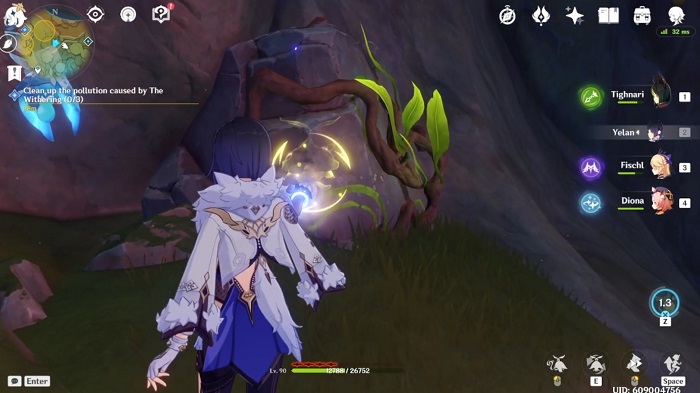 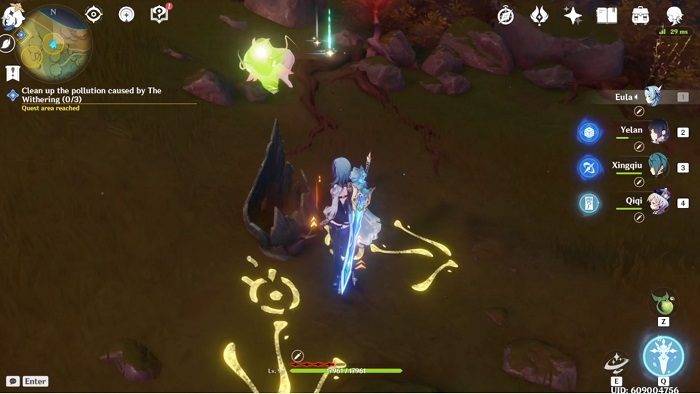 These point to mechanisms that will require you to use the Kusava fruit to activate. Once you have activated a mechanism, the glow will go away. Keep in mind that each Dendrograna spawn point that requires this will keep its mechanisms only on that specific island that it’s on, so there is no need to wander far from it to find what you need. Once the Dendrograna has both mechanisms activated, it’ll give you some precious Dendrograna to deal with the Withering Branches. Once you get the first island done, head over to the next once Aranaga points out that you’re ready to keep moving on. Be cautious running around here because that giant glowing orb in the middle of the cavern likes spitting out balls of death toward you.

Once you’ve cleared the three flowers, you’ll have to deal with some Fungi down near the Withering Zone’s main tree, and you’ll have some dialogue with the Aranara. With that done, you’re finished with this questline!

Now that you’ve gotten this questline finished, here are the links to the other ones needed for Act 2:

If you need links to the Acts themselves, you can find those here:

Don’t worry, be happy I’m going to start off this review by saying that I never was a big anime fan growing up. Sure, I’ve dabbled in it during…