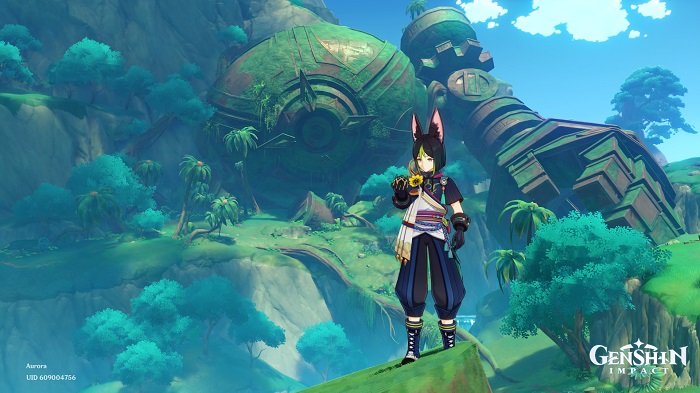 Greetings, travelers! Today we’ll be taking a look at the Vimana Agama subquest, needed for the completion of Act 2 of the Aranyaka questline, so needless to say, you’ll need to have completed Act 1 and part of Act 2 of the Aranyaka questline to do this. If you’ve been curious about that massive Ruin Golem over at Devantaka Mountain, here’s your opportunity to check out the inside! 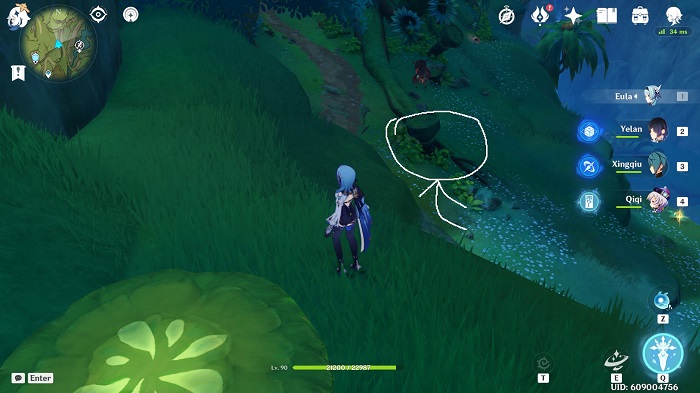 You’ll be trying to find a little blue Aranara named Ararycan. He’ll be hiding out in the bushes circled in the image above. First, chat him up for a bit of insight on what he’s doing in the area. He’ll have you check out a nearby area, right next to the giant Ruin Golem’s hand. Once you check that out, you’ll be heading over to investigate a “suspicious” person. 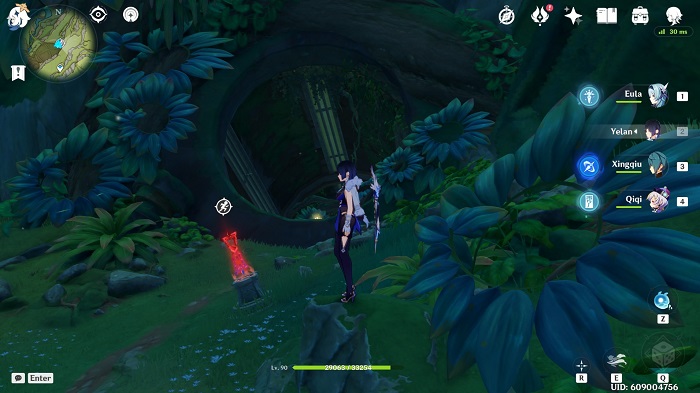 Follow down this cave here, and you’ll be on a quite long trail of Four-Leaf Sigils. Just follow the blue marker, and you’ll eventually find this guy hanging out near what looks like an entrance to the giant Ruin robot. 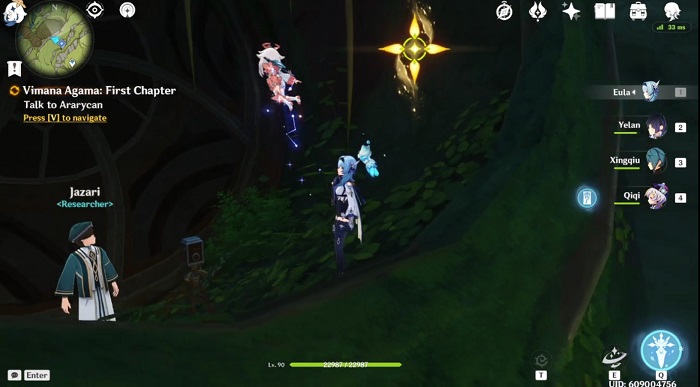 Talk to Jazari, and he’ll reveal that he’s been hanging out here to try and find a way into that giant Ruin Robot. That’s it, he’s not up to anything else suspicious, but you’ll need to reaffirm that to Ararycan. Once he’s satisfied, you can get on with figuring out how to help out Jazari get into the Ruin Golem. He wants you to head to Port Ormos and talk to an older man named Royinjan. He’ll have a part you are looking for, or, at least, you think he does. You’ll have to strike a deal with him to get him to fork over the goods (I was able to do it at 440814, but I imagine you might be able to get him to agree for less). 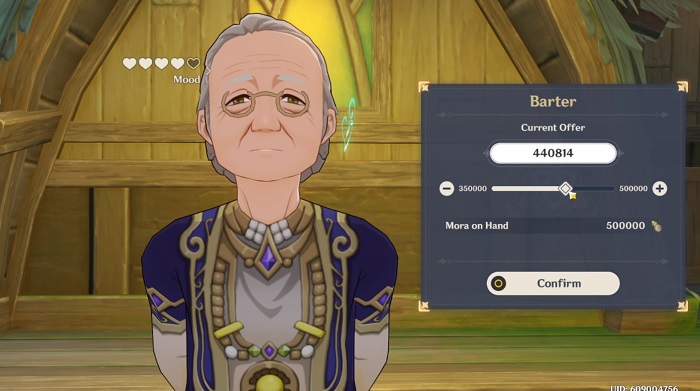 Well, it turns out this wasn’t as planned since that wasn’t the part that was needed. But the chase continues as Royinjan remembers a hidden base he played at with some friends when he was younger that might have some more clues. With that ends the first part of this quest, but don’t worry, we’re just getting started here. 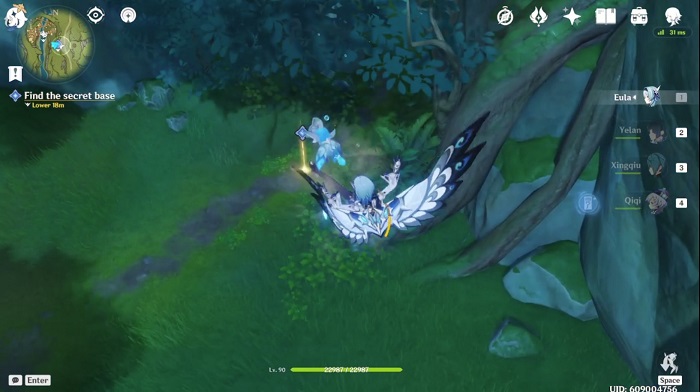 You’ll want to head over to the Statue of the Seven just to the north of Port Ormos, then head north. You’ll enter a cutscene when you get close to the entrance to the secret base near Vimara Village, as seen above.

It turns out you’ll be learning another one of the hidden songs that the Aranara use for the various mechanisms in Sumeru. This is the Rhythm of Vamadha, and it can unlock the ability to spin these strange doorways to be open. 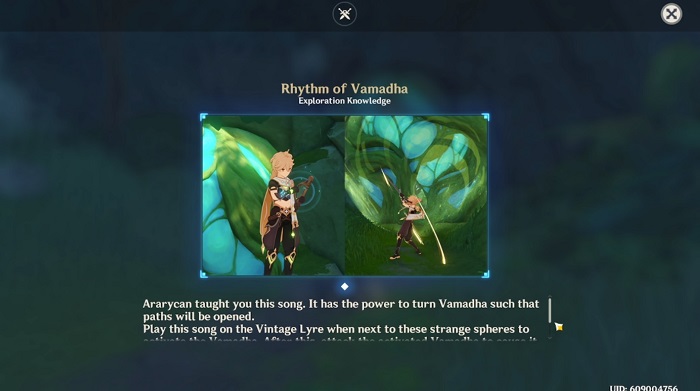 Keep in mind that once you play the tune, you need to then hit the door to get it to spin open. Get the door open, then follow it in and head to the next marker to trigger some dialogue. Get through that, then you’ll need to dig up some buried items. Just follow the marker. You’ll get the item, then need to rinse through more dialogue. You’ll need to go digging after that for the Amiti Device. 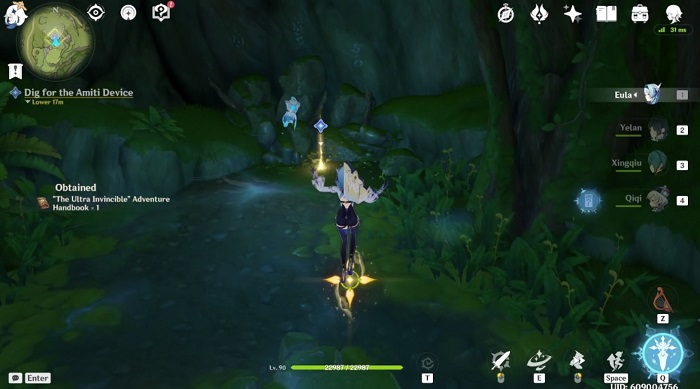 It turns out it’s missing a few pieces, so talk to Amadhiah over at Vimara Village for some hints on where to find these other parts. 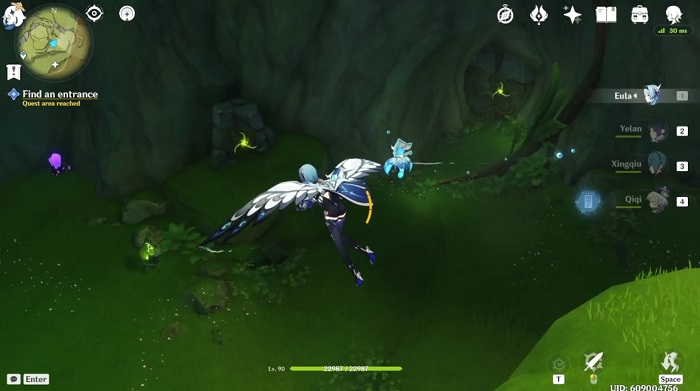 You’ll be heading over to the Teleport Waypoint near where you first met Jazari. Follow the markers toward the other end of the cave, near the ground. You’ll see a spawner for the Dendrograna, and some walls that need broken by them, as seen in the image above. The entrance you must follow will be hidden behind the wall on the right of the image above.

Now you’ve got some pruning to do, as the Withering Zone here needs to be addressed before you can continue investigating. Clear out the nasty stuff, then grab the mechanical component that’s revealed once the Tumor’s been removed. 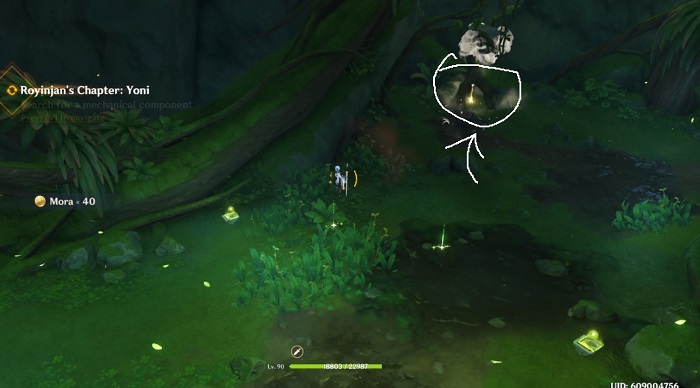 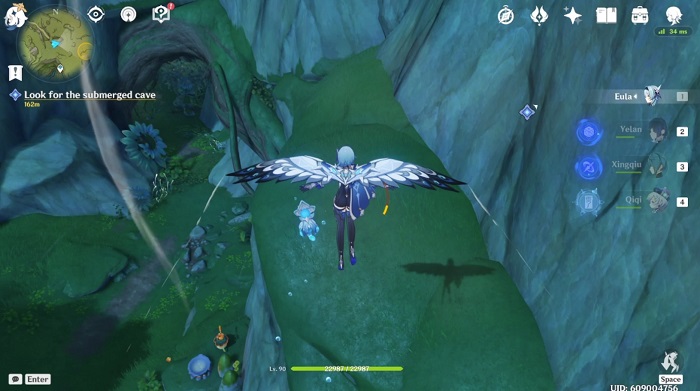 Head over to the Teleport Point nearest to the designated area. Then you’ll be looking for the cave entrance depicted above.

Your goal here will be to drain the entire cave. To do this, you’ll need to find and guide two Seelies near a switch. The first one is hanging out near this submerged gear. 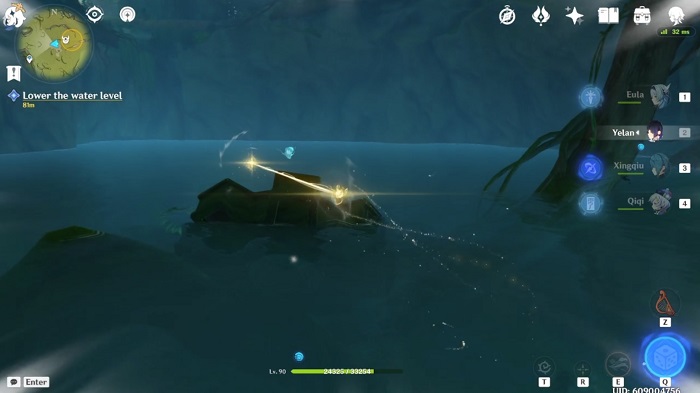 Follow it back using the Four-Leaf Sigil. Once you’ve done that, the other Seelie is just underneath where that switch is, in a little room.

With the water drained, follow the blue marker to your next destination. You’ll have one of those spinning doors that you’ll need to play the Rhythm of Vamadha to open. 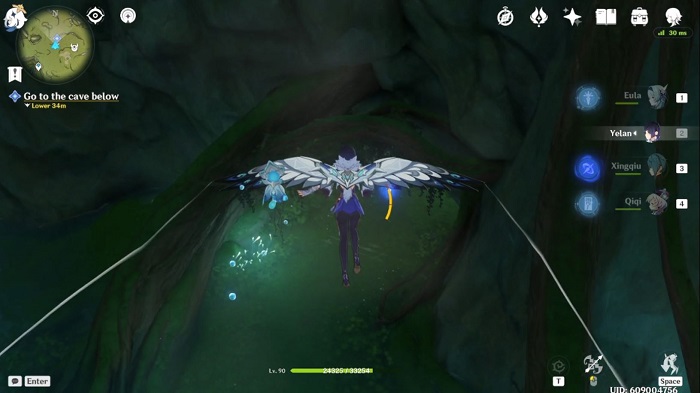 Don’t forget to hit it after you play the tune. Head into the next room, and, bit of advice, take out all the enemies first before working on hitting the Dendro crests with Dendrograna. They can be a bit fiddly to hit since the Dendrograna like to hit the Totems if you use an archer with a charged shot, so if at first, you don’t succeed, get three Dendrograna and spam the fire button until you get it to hit the Crest. The one in the picture is a particularly tricky one to hit from below, so you might head up on the platform and hit it on the same level. 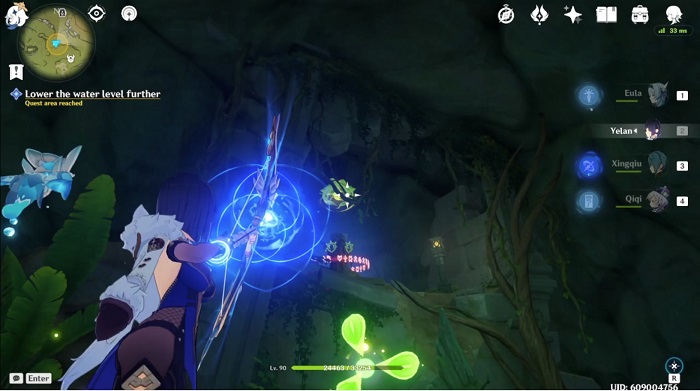 Head down below to the giant rusted gear and claim the next piece of the puzzle. Get back to the secret base so you can chat with Jazari and Royinjan to finally finish up Royinjan’s Chapter. 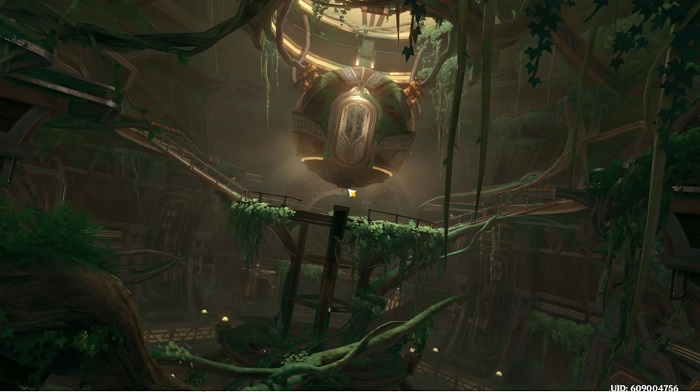 Puzzle time! Go ahead and head over to where you first met Jazari, and you will be able to now enter the Ruin Golem. Join up with Jazari, and you will now head inside, and he will give you some instructions on how to power this thing up. Head to the lower floor, and you can take out the nearby enemies before conversing with Jazari again.

The objects you’re looking for here are Energy Blocks, little gems that you can carry around and insert into mechanisms. I’ll show the full guide on what order to get these in. First, pick up the two right next to Jazari. 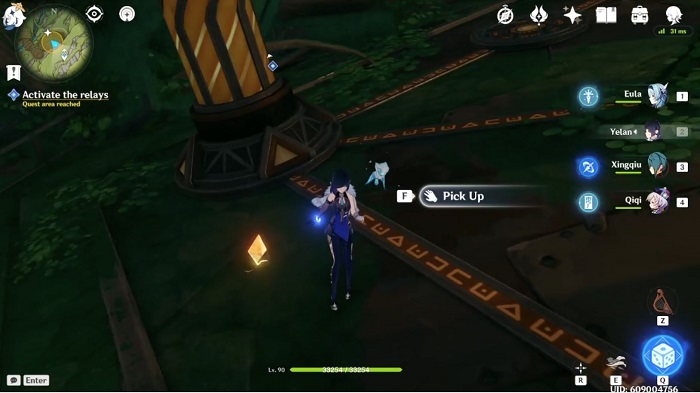 Now you can insert these into some nearby pillars, which will trigger a short cutscene. After that, you’ll be ready to head up to the middle level. Once you’re up there, there’s one spot where you can get an Energy Block from, as shown in the picture below. 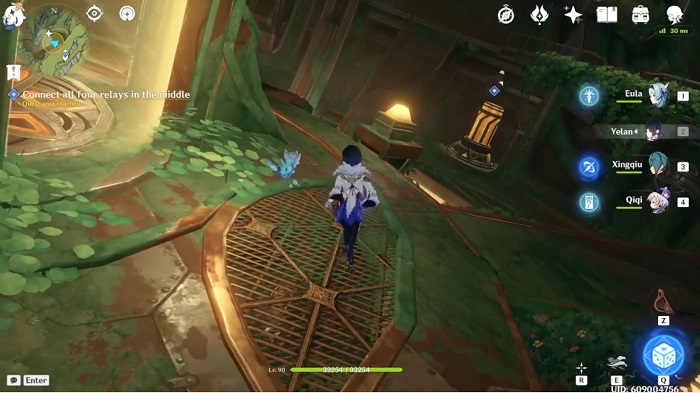 With an Energy Block in hand, you’ll find these glowing doors with mechanisms in front of them. 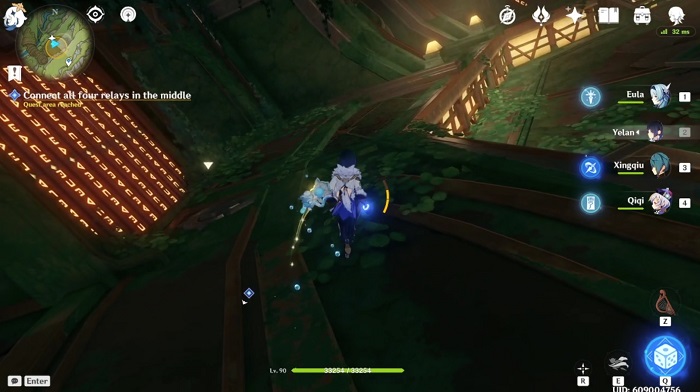 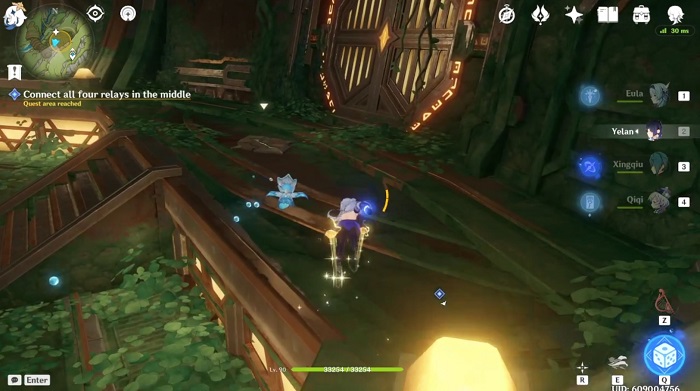 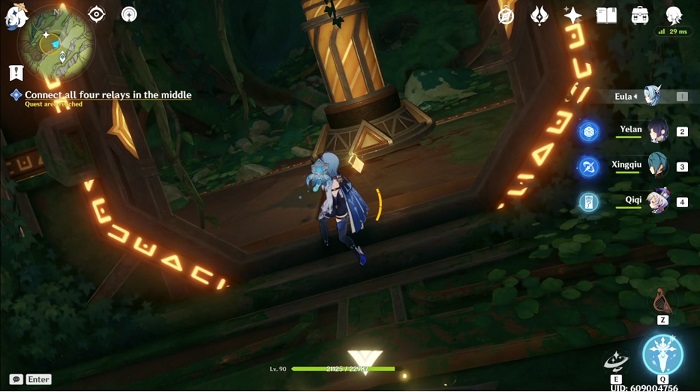 Before you can proceed, you’ll have to take out a Black Serpent Knight. Finish him off, then talk to Jazari, who’ll instruct you to head to the top floor and get that powered on. The first thing you’ll do is snatch an Energy Block from the relay to power the door on the right. 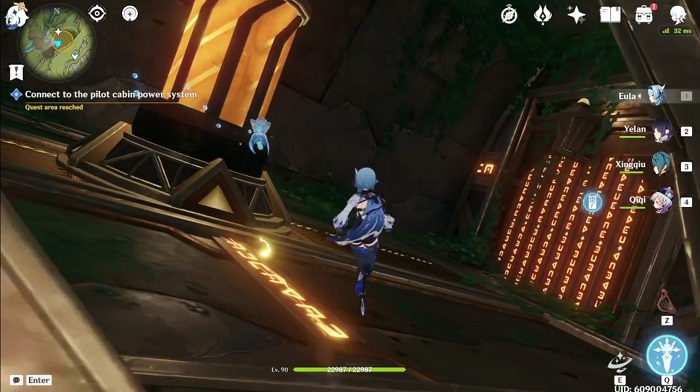 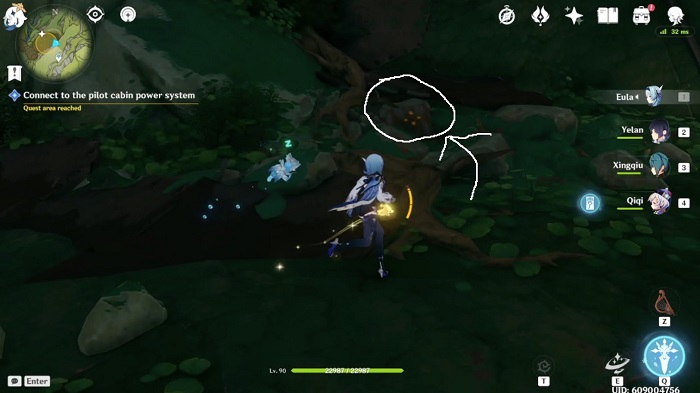 Head back out, grab the Energy Block, and now use your two Energy Blocks to power the two relays.

Time to play with the mech! Head to the pilot cabin, interact with the control panel, and initiate the awesome mecha action! Okay, so you get one fist slam, and then it’s done, but it was sure fun while it lasted. Talk to Jazari again, and now you can get to the final chapter. 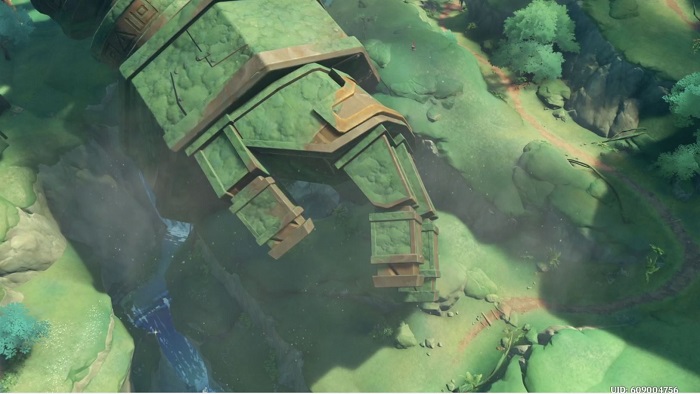 Now you get to see where that hole leads that got opened up by the Ruin Golem. Follow the path out and talk to Ararycan. Time to go cave spelunking, so head down the hole and follow the cave. 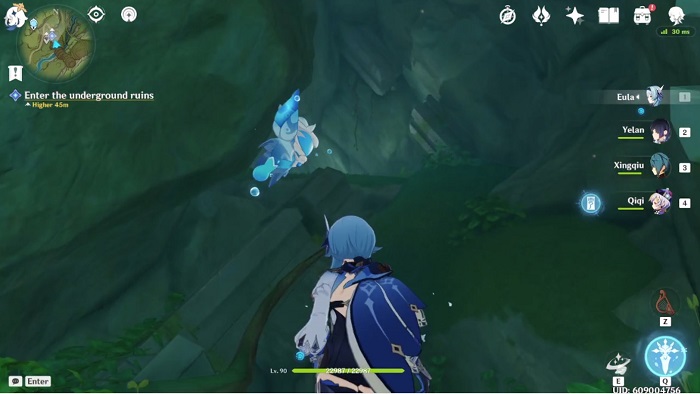 You’ll eventually get to a large chamber where you’ll need to take care of some Abyss Mages as you clear out a Withering Zone. I highly advise keeping a Hydro, Pyro, and Cryo character in your team to help with taking out the Abyss Mages. Luckily all three groups of them are pretty easy to find. Just keep in mind your elements when taking care of the Abyss Mages.

With those taken care of, you can now head to the core to shut it down. There’ll be some Four-Leaf Sigils nearby that can make it easier to get up there. 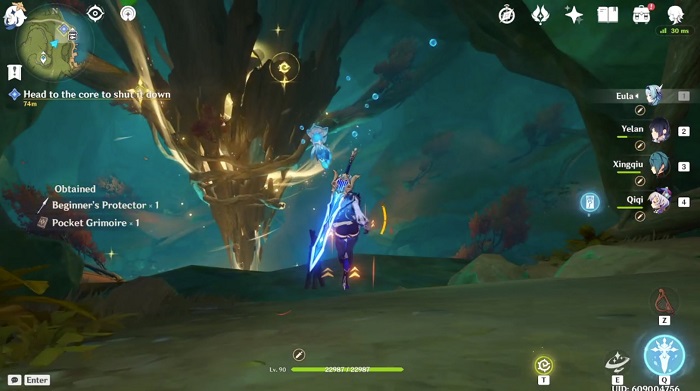 Once up there, you’ll get to have a fight with an Abyss Lector. You’ll need to take him out, then head back up to the core to turn it off. The last thing you’ll need to do is head out of the cave via a Teleport Point, then go talk to Ararycan.

Now that you’ve gotten this questline finished, here are the links to the other ones needed for Act 2: