Time to Deal With Marana’s Avatar! 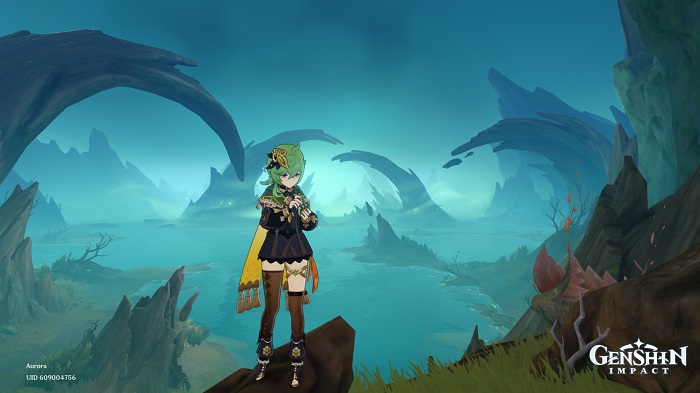 Greetings, travelers! After the slew of sidequests and finishing up of Act 2, we’re here to give you the guide for Act 3 of the Aranyaka Questline. Luckily this one is much simpler and quicker than the last act, so let’s get right to it! 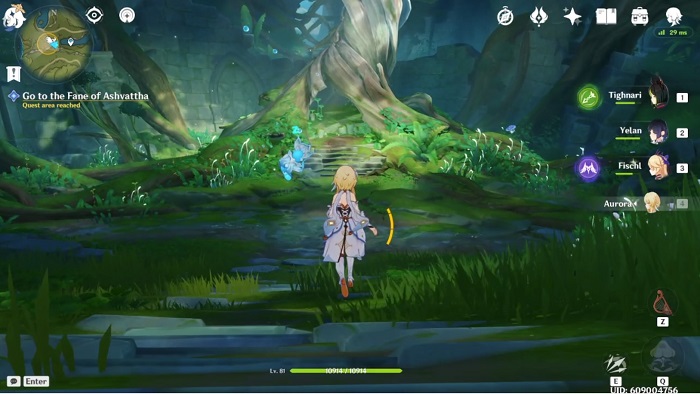 First things first, you’ll be meeting up with Arama before heading to the Fane of Ashvattha. To get to this area, you’ll need to have drained the water from this area. If you need a hand with that, we have a guide here that’ll get you sorted out.

When you interact with the Fane of Ashvattha, you’ll be whisked away and need to clear out a Witerhing Zone. Luckily, there’s no tricks or gimmicks here. The blood-red flowers you’ll be pruning are right out in the open. Keep in mind that the enemies you’ll be facing here are of the Rifthound variety, so bring a healer. 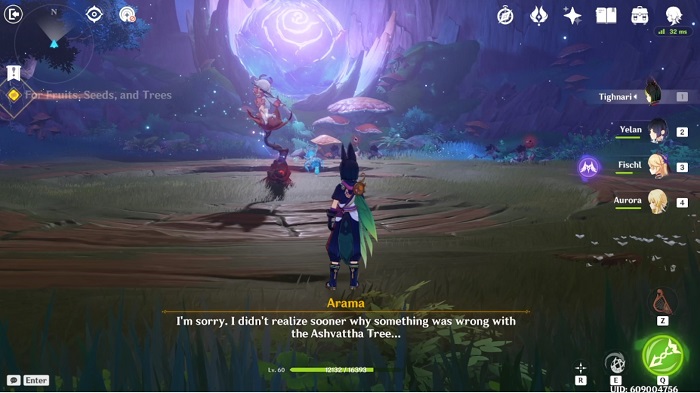 So once you clear that out and depart from the dream, you’ll have a bit of a journey here to do. Near the back of the room, you’ll be led to a gate of vines that will open up for you and Arama to venture into Old Vanarana. 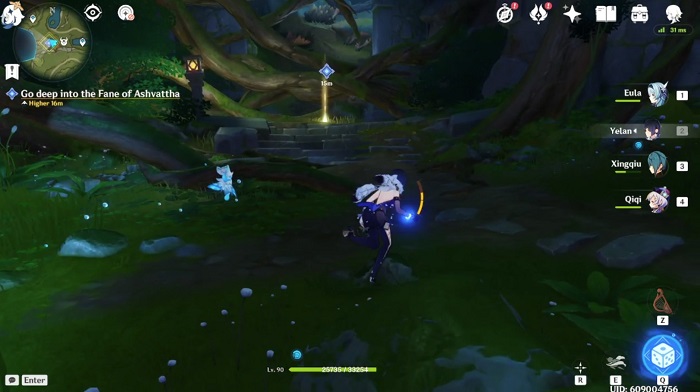 While Arama guides you through the withering lands, you’ll want to stay near because the Withering is so concentrated here that you will accumulate your red bar above your health bar just by being exposed to it. So watch what you get into fights with out here. Unfortunately, Arama takes a bit of an obtuse path, so don’t wander around too much just yet.

Your objective here is to obtain three Inscriptions of Remembrance. 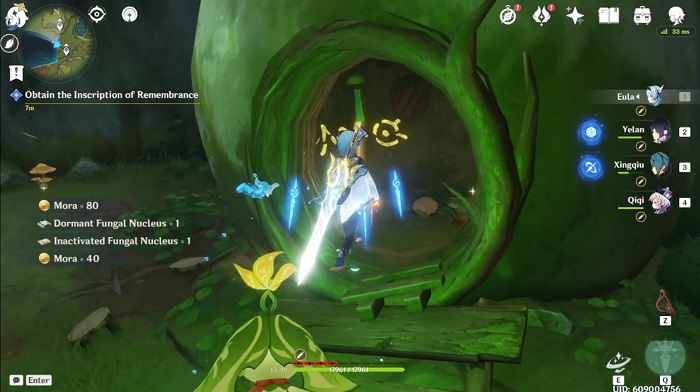 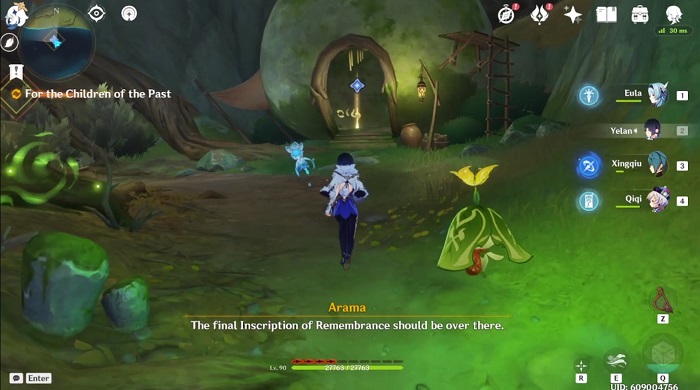 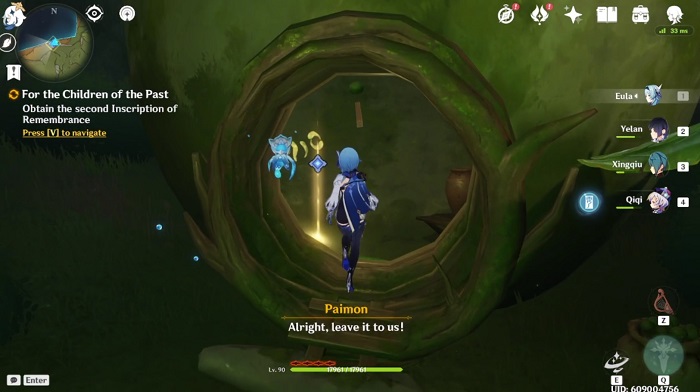 Once you have those, you get to head to the largest tree of the area, where you’ll undo a large seal. Head further in with Arama, and you’ll come across a giant pit of sand with a Withering Zone you’ll need to handle. Except it turns out you won’t have to do anything for once, Arama just punches it to death, and now you get a different task of lifting the seal by burning the corresponding stones. There are seven of them, and a few are more hidden than others. We’ll start from the nearest, just don’t forget that they need burning, and you’ll need to keep an eye on that red bar above your health down there, or you will have a party wipe. 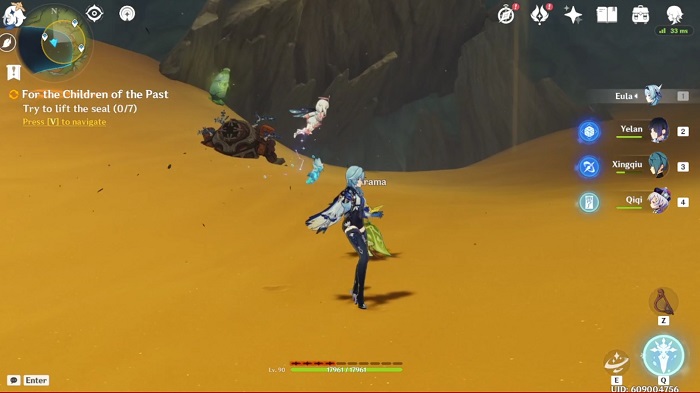 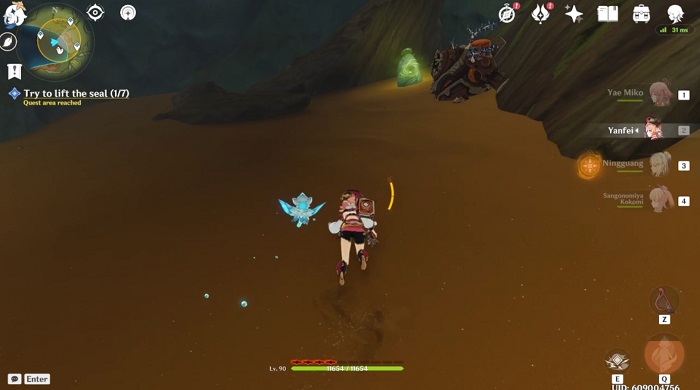 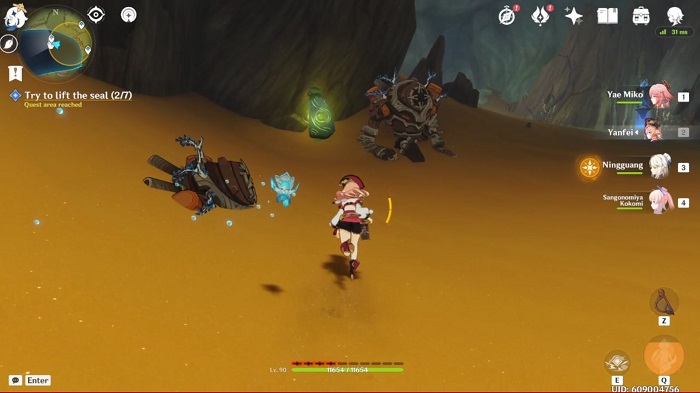 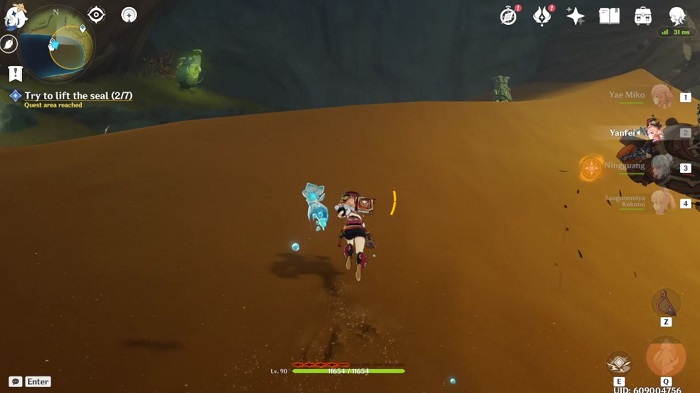 Once you get the four in the main room, you’ll need to head to a nearby Claustroflower with your Lyre and play the corresponding song to reveal the way forward. 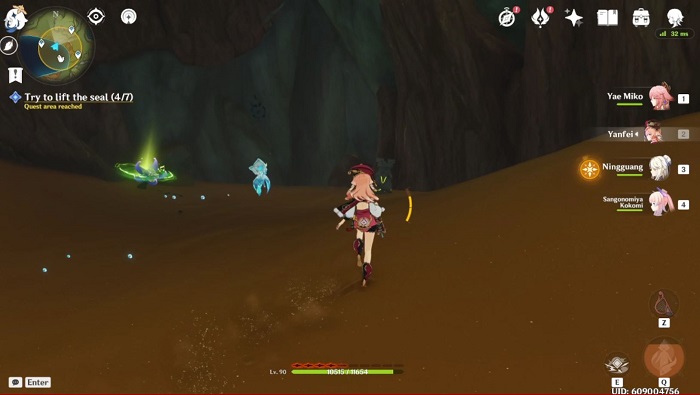 You’ll have three in here to take care of, the first one being near the entrance to the cave. The next one is a bit further in, and you’ll need to use your Lyre to conjure up some Healthy Dendrograna. Once you’ve done that, shoot down the nearby crests. With that out of the way, you’ll have the seal to burn and the way forward open. 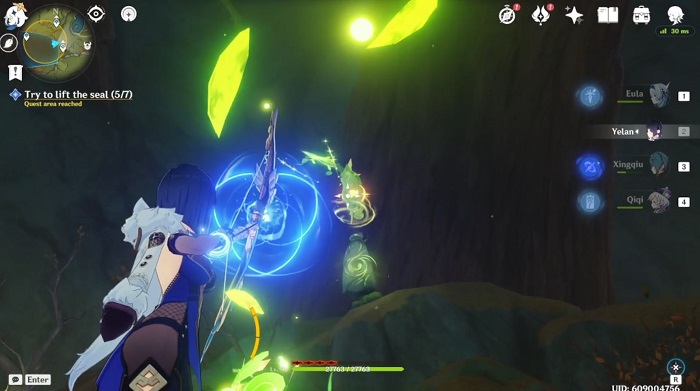 Just up ahead is the last seal to burn. 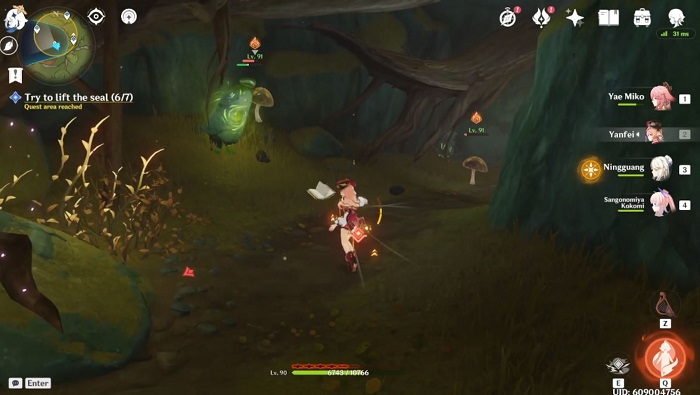 To exit the cave, head further in, and you’ll see a Claustroflower you can play at to quickly return to Arama. After some dialogue, the sand will sink, and you’ll be in a different chamber now. Approach the nearby Ruin Grader, and you’ll have a normal fight on your hands. Until it gets low on health and restores back to full. You’ll need to drop this thing twice before Arama has enough and decks the thing to turn it off for good. Again, the floor drops out from under you, sending you even deeper into the cave. Now you’ll have a bit of dialogue to go through. 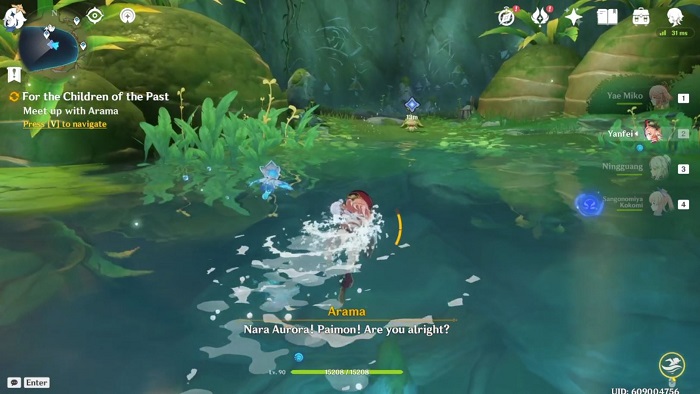 Everything you need to find will be have glowing golden points in front of them, should be eight in total. You’ll go through some more dialogue with Arama and Aramuhukunda before being prompted to head through the roots. You’ll be led into the deepest part of the cave, where a massive, sprawling land of Withering is. Your final battle is in here, so just follow Arama closely, and you’ll get to see the Marana’s Avatar.

When you first start the fight with Marana’s Avatar, you won’t be able to do anything to it. Instead, you’ll need to follow Arama to a nearby Withering Zone. While this fight will be a bit hectic, there’s a pretty easy method to this fight. You’ll only have access to the Traveler for this portion, however, you’ll have access to shielding and healing thanks to Arama and his little radius.

Every little area you have to go to will have a plethora of Withering Branches and some Dendrograna to prune them with. Arama will be nearby during all of the sequence, so don’t worry about being without help during this fight. Now, one of the most important things to keep track of is the purple lightning strikes that you’ll see occur every now and again, as seen in the image below. 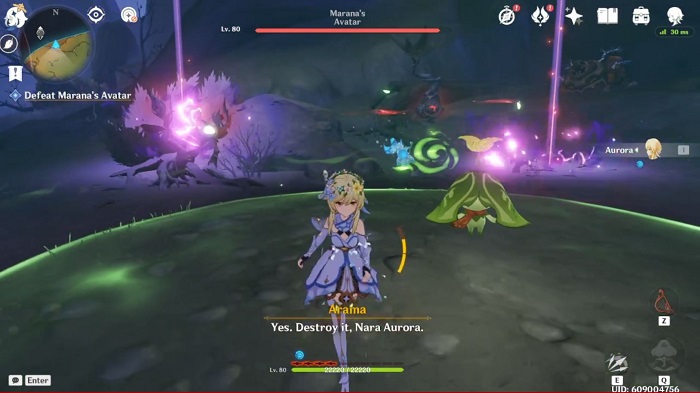 Stay in Arama’s field when these are about to strike; they hurt something fierce. Get healed and safe, then pop back out for more gardening once the coast is clear. Once you get the flowers handled and the Tumor of the Withering destroyed, you’ll follow a trail of Four-Leaf Sigils to get back to the main field. 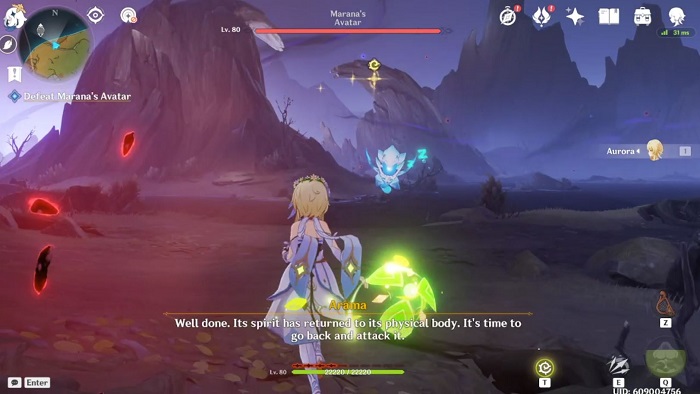 Drop in, then just start wailing on the core until it starts moving again. You’ll now get to repeat what you just did by following Arama to another Withering Zone. The only difference for the second and eventual third Withering Zone is adding some Rifthounds to the mix. Once you’ve finished your three Withering Zones and beat on the core a bit more, you’ll be treated to a cutscene before the real final battle. 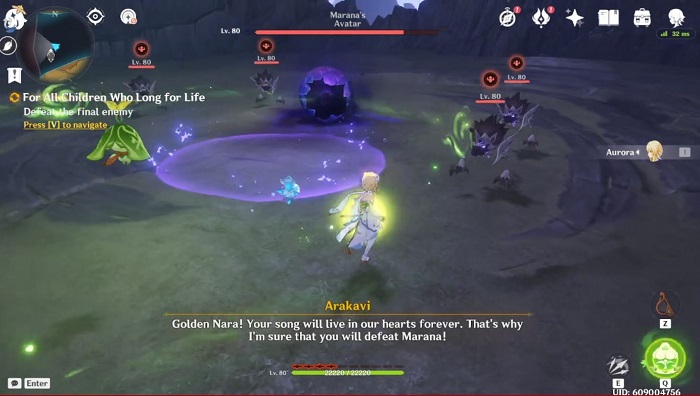 You’ll be taking on Rifthounds, purple lightning, and beating on Marana’s Avatar all at the same time. It’s not much different from handling the Withering Zones, just keep smashing up Marana’s Avatar and using Arama’s healing when needed. With Marana’s Avatar defeated, you’ll be treated to an extra long cutscene here before having Act 3 finished up! But, there’s just a quick loose end to clean up, which is here in Act 4.

Act 4: In the End, the Forest Remembers 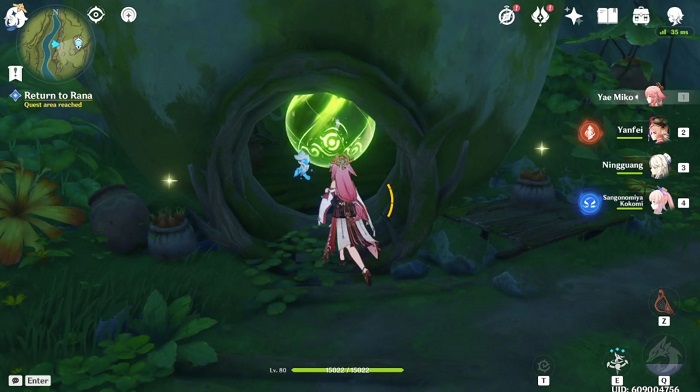 I’m sure some of you probably have forgotten entirely about why we started this long quest, to begin with. Well, that person is Rana, and she’s still in that bubble being tended to. Head on back over to where she’s been kept safe and sound. 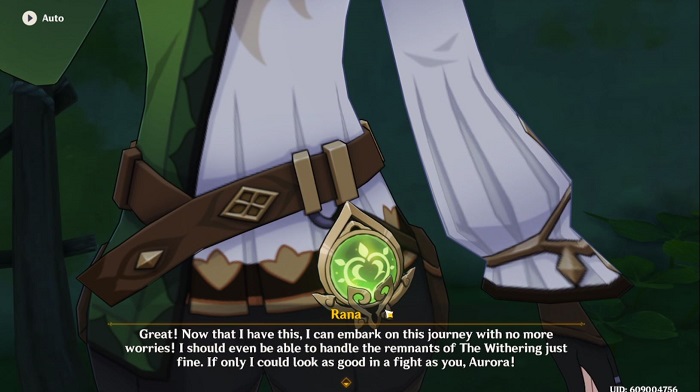 Work through some dialogue, and you’ll get to see a first for Genshin Impact: Someone getting their Vision firsthand! With that all done, your long quest with the Aranara and Rana is over, and you can claim your rewards now!

Should you need them, here are the links to the other Acts:

That’s all for this long, long guide, but stay tuned for more of the latest Genshin Impact news and guides! 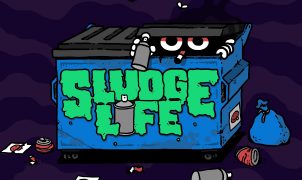