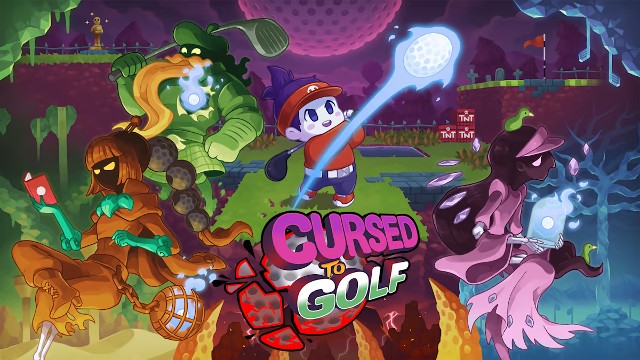 At some point during my time with Cursed to Golf, I began to feel a burning sensation in my chest. I thought it odd, and a little concerning, until I realized that I had been holding my breath every time I took a shot. I hadn’t even been playing that long! My husband took it upon himself to remind me to breathe. Who knew golf could be so stressful?

When I think of golf games, I think of Mario Golf: bright and sunny, whimsical, relaxed breathing patterns. Cursed to Golf is an entirely different kind of golf game. The fundamentals are here: the traditional power meter, an arced line of dots for aiming, and the ability to spin the ball when it lands. The similarities end there because Cursed to Golf has a healthy injection of roguelike and card-collecting elements, and platformer-style hazards. It is, in a word, wild!

Death Is the Beginning 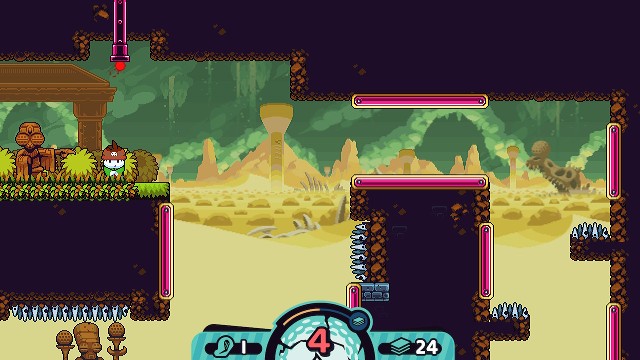 Cursed to Golf begins with our soon-to-be cursed golfer at an international tournament. Just as our golfer is about to hit the winning shot, he’s struck by lightning and sent to Golf Purgatory. It’s a goofy premise, but it’s well supported by an interesting cast of characters, and it lends itself well to the game’s frenetic stage designs. There’s more narrative here than you’d expect to find in a golf game, but it works surprisingly well. It manages to feel sincere without being trite, and its healthy sense of humor will help keep your anger at bay.

And you’ll get angry and frustrated with it. At least, I did. I’m not a fan of roguelikes. I just don’t enjoy the punishment and grinding features found in the genre. And I wasn’t a fan of it here either at the beginning. I almost threw in the towel and rage quit multiple times; I’m getting ahead of myself, though.

Failure Is Par for the Course 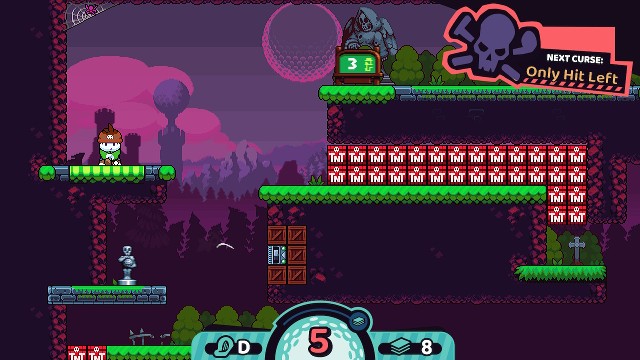 All 18 holes in Cursed to Golf have a par of five—you have exactly five shots to make it to the end. Given the size of the courses, it’s an almost impossible task. Some courses took me upwards of half an hour to beat, if not more. The key to extending your play time is to hit silver and gold idols strewn throughout the course. Silver and gold idols give you two and four extra shots, respectively. If you want to get anywhere in this game, it’s essential to plan your route through each course to maximize every shot.

Cursed to Golf’s roguelike element is found in death. Well, not death, per se. You’re a spirit, so you don’t die. When you run out of shots, though, you get sucked back to the start of the game. You learn from your mistakes and try—emphasis on try—to do better. The game’s courses are randomly ordered from more than a total of 70. You’ll happen upon familiar courses now and again, for better and worse because some are way more difficult than others. 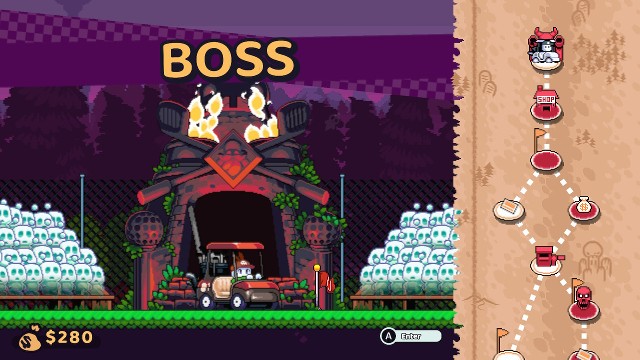 You pick your courses on a map. Some spaces award cards or money, but those routes often end in cursed holes. Those holes have modifiers every few turns, so I avoided them like the plague. Regardless of the hole you pick, every course has multiple routes through it. Even a familiar course allows you to find a faster way through it. Those hazards I mentioned will temper your grand designs, however. There are, of course, traditional sand bunkers and water hazards, but those are the least of your worries. Some paths are blocked with stacks of TNT. You can trigger them by striking them, but it usually costs a turn to set them off. Teleporters crisscross courses, offering shortcuts if you can manage to maneuver your way to them. Fans blow your ball along set routes, sometimes with detrimental effects. The pinball-style bumpers, my personal favorite, let you fling your ball wherever you want, and you can keep doing it as long as you hit another bumper.

Landing in some hazards wastes your shot and resets you back to where you started. Some hazards, such as piranhas, take an additional shot from you. This means that if you land in one of those hazards twice, you’ve wasted four shots, and you have one shot to make it to an idol or the end. It’s no wonder I stopped breathing!

The Struggle Is Real 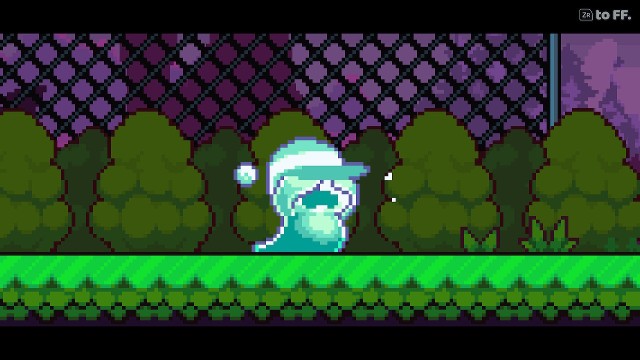 My frustrations, then, with Cursed to Golf are obvious. It’s a breeze to screw up and fail. A simple accident can have devastating consequences. Landing your ball a pixel off from its intended destination can end the game. And it’s mostly your fault. It’s not an unfair game, but there’s a degree of randomness or unknowability to it that can be frustrating. Even with the arcing dots that plot your angle, it can still be difficult to know exactly how your ball will act—much like in real golf. I still don’t have a great handle on spinning the ball when it lands, and it’s a necessary skill to succeed. It never quite behaves the way I expect, and I’ve lost track of the times I’ve screwed up my game because the ball went ever so slightly too far—or not far enough! Still, once you’ve played enough, you start to get a feel for how you think it will act.

Success is in the Cards 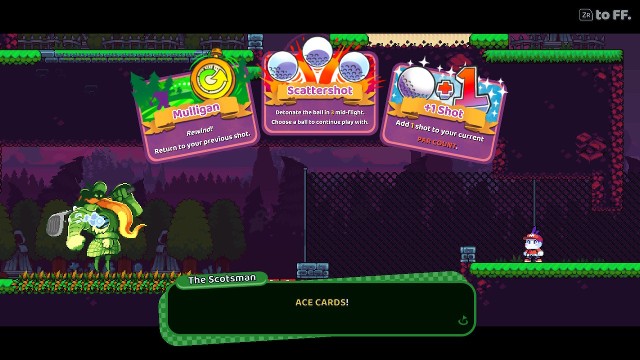 Unlike real golf, our cursed golfer is armed with only three clubs: a driver for long shots, an iron for medium shots, and a wedge for short shots. The wedge is also useful for verticality. The absence of a putter is kind of weird, but you adjust to using the wedge for that purpose. Also unlike real golf, there are a variety of ace cards you can use to help tip the scales in your favor.

Ace cards are your…ace in the hole. Bad pun aside, it’s true. Ace cards, of which there are twenty different types, give you all kinds of different abilities. You can redo shots, freeze water, burn vines, travel through portals, drill through the ground, and much, much more. Ace cards, if used wisely, give you an incredible degree of flexibility. They’re instrumental in reaching shortcuts and can save you from yourself if you screw up. They can even give you additional shots!

While ace cards add another degree of complexity, and friendliness, to Cursed to Golf’s unique brand of golf, they aren’t miracle workers. You can’t rely on them to carry you through the game. Most cards still rely on the power and aiming meters, which means it’s just as easy to screw up with them as it is without them. 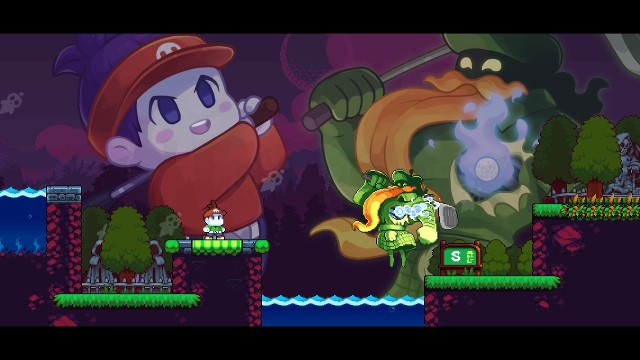 You earn money based on how many shots you have left at the end of each hole. You can spend that money on ace cards at a store. There’s also a binder in which they can be added, should you want to save them for later. Of course, when the game resets, you lose any cards you were still holding, so plan accordingly!

Every fifth hole, you play against another poor soul who’s trapped in purgatory with you. These duels are hard. All the same rules apply, but you also have to reach the hole first to win. The key to beating them, aside from playing well, is to hit special statues that stun them for a turn. The first time I fought the Scotsman, a gigantic, jolly Scottish spirit, I didn’t think I’d ever beat him. His swing range is massive; he can easily double your strongest swing. The other two bosses have their own unique quirks that are guaranteed to keep you on your toes. If you manage to beat these bosses, you don’t have to beat them again your next time through. They’ll also give you a gift to ease some of your struggles. The final boss is…an experience. You’ll see if you ever get there. 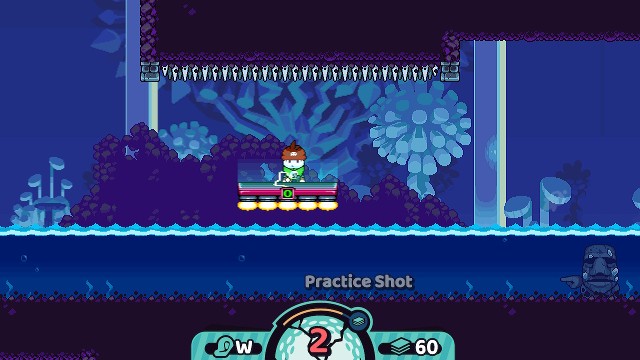 There’s nothing extraordinary about Cursed to Golf’s pixelated designs, but it’s inviting, nonetheless. There are a lot of fun little details, however. Like the way our cursed little golfer sobs when he loses and how he gets sucked into and spit out of a vortex when he travels from hole to hole. The soundtrack, however, is outstanding, especially the boss themes. The Scotsman’s theme incorporates bagpipes and chanting in its invigorating rock melody. The Caverns’ songs are a mellow and gentle mix, a curious contrast to its frustratingly claustrophobic pathways. The soundtrack is a great mix of rock, pop, and the occasional techno beat, and it just works. That rave song that plays in the later stages of the first world is crazy addicting. It’s still stuck in my head.

You Get Better, Eventually. Probably. 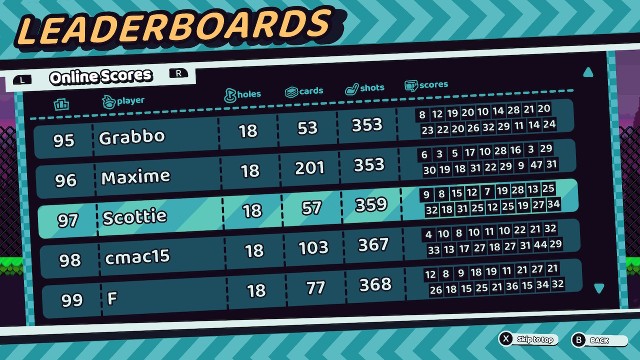 So, what’s not to like about Cursed to Golf? Honestly, there’s very little. Some might find the roguelike elements too frustrating. And it’s true, in the early going, those elements are especially harsh. Once you get a few courses under your belt and a few cards in your hand, however, the tables begin to shift ever so slightly in your favor. And because the levels have so many different possible routes, it never feels like you’re stuck repeating the same level. I spent probably 20 hours battling my way through to the game’s end, and while I got frustrated, I was never bored.

If anything, I wish there were more content. And Cursed to Golf seems primed for multiplayer, given those boss battles. At this point, I feel like I’ve probably seen everything. I could try to win a top spot on the leaderboard but looking at the current scores…I’m not nearly good enough. I was good enough to beat the game, and that’s good enough for me. I included my not-so-impressive score in the above screenshot. Surely you can beat me.

Cursed to Golf is a brilliant little golf game. Its smart design encourages creativity, and its roguelike elements, while harsh, aren’t brutal enough to derail the experience. It’s astonishing how well the individual parts from different genres mix into a cohesive whole—or should I say “hole”? More than anything, though, it’s just fun. That’s all there is to it: it’s just a fun game that deserves your attention.