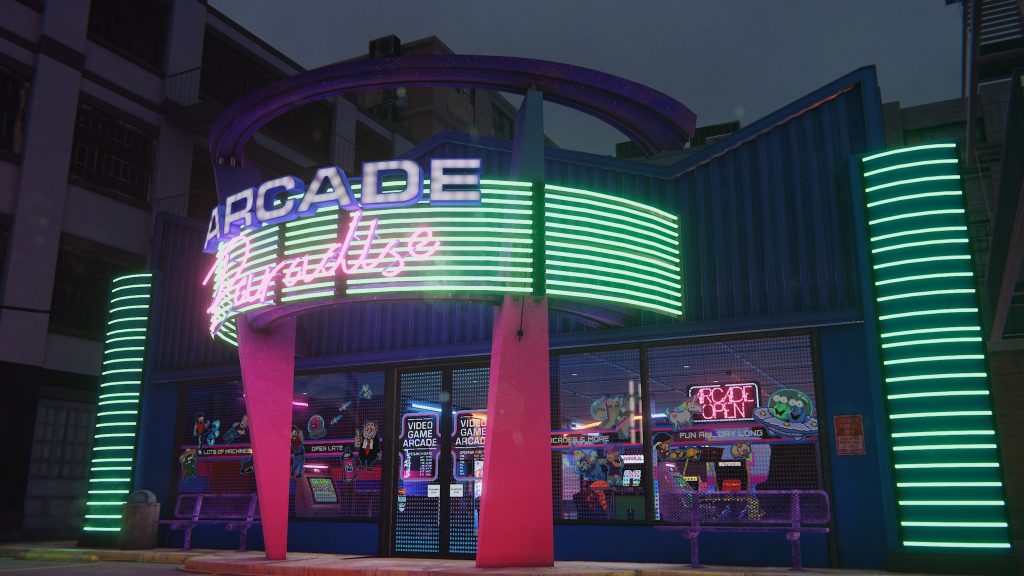 Up and at ’em, Ashley! It’s your first day on the job at your new laundrette, and you don’t want to be late (even though you’ve probably stayed up all night playing games and listening to grunge). You know the deal, Dad wants you to do something with your life instead of being a listless, good-for-nothing teenager, so he’s practically gifted you one of his first businesses. The laundry lifestyle may not be glamorous, but as Dad likes to say, “all towns need somewhere to wash their linens.” It’s a shame you can’t spend more time with the arcade machines your sister Lesley left in the back room; all things considered, they’re probably going to end up being more profitable than this laundry business anyway. Say, that’s an idea…

So begins Arcade Paradise, an arcade/laundromat management sim where the 90s are alive and well and a thriving arcade is but a quarter away (or two, or three, or a hundred thousand…). Developed by Nosebleed Interactive and published by Wired Productions, Arcade Paradise is available on PC and all consoles for a launch price of $19.99. Can you take this burgeoning arcade in the back of your dingy laundromat and turn it into a gaming mecca? 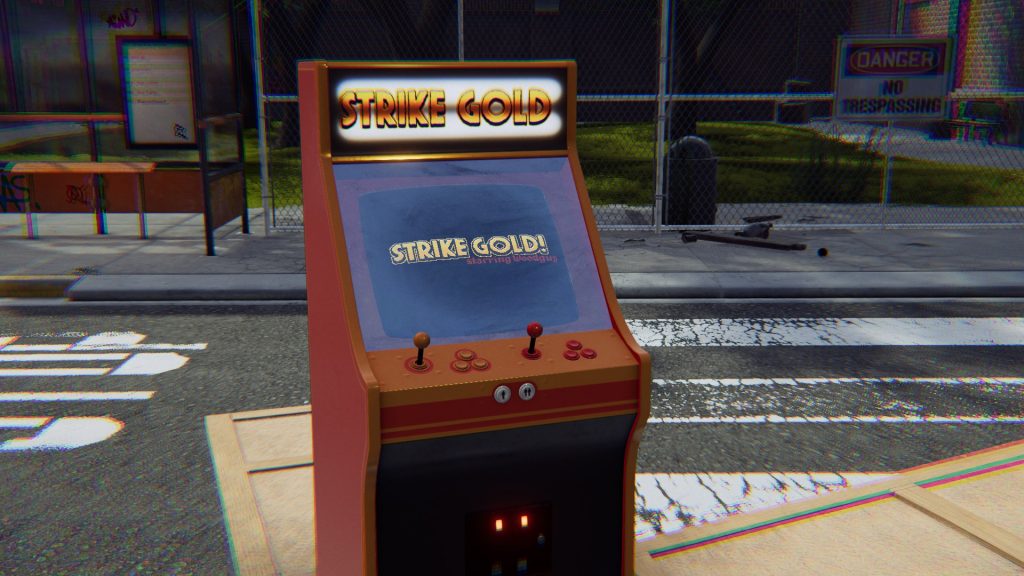 As mentioned above, Arcade Paradise has players taking on the role of Ashley, a teenager with some business classes under their belt and a penchant for video games. Ashley’s dad is far too busy yachting it up on the Riviera to truly pay attention to the laundromat, so he’s bequeathed it to you in the hopes that you’ll make something of yourself (and the forgotten business). But Ashley can’t help but be drawn to the arcade cabinets in the back room, and soon draws up plans to shift the establishment from soaps and suds to beeps and boops. With Ashley’s sister, Lesley, helping to move the paperwork along, Ashley soon fulfills their joint dream of opening an arcade; can you make it thrive?

Although the name of the game is Arcade Paradise, the early game may as well be called Laundry Hell. This is because, even though you’re clearly operating a self-serve laundromat, you’ll have to do the laundry for your customers by yourself. They’ll load their little baskets up on the table, which you’ll then collect and dump into the washing machines. After several hours, a timer on your sweet retro watch will beep, notifying you to put the wash into the dryer. A few hours later and it’s time to take it out again, put it on a different table, and collect anywhere from $5 – $30 (depending on how fast you were). 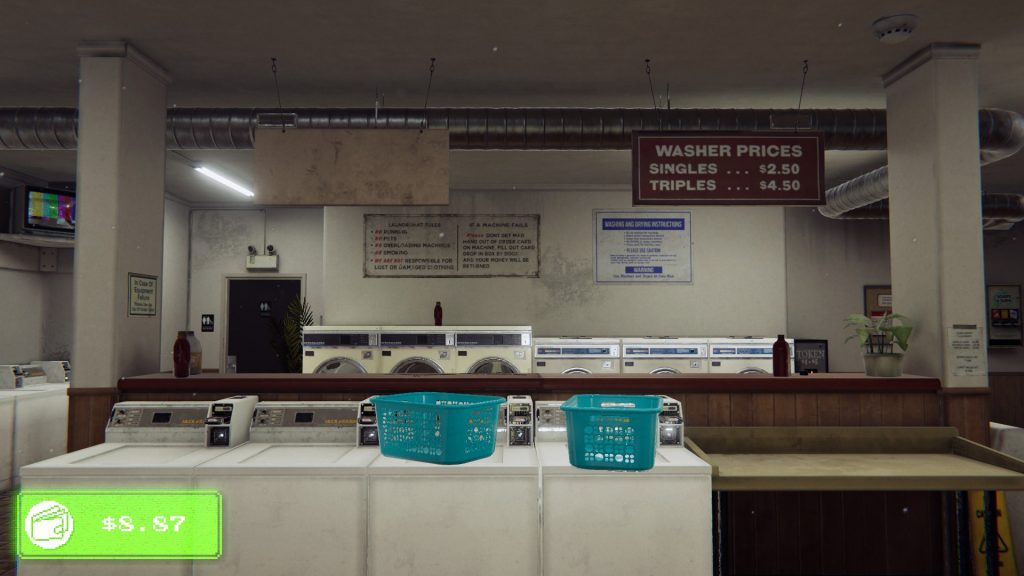 This gets old pretty fast, both from Ashley’s perspective and from a player POV, so it’s time to start investing more into those arcade cabinets. To do this, you’ll need to collect the quarters from all the hoppers (one for the laundry out front + all the arcade cabinets); combined with your laundry money, trash-collecting money, and gum-removing money, you’ll be able to buy new arcade cabinets pretty quickly. Do this enough times and Lesley will help you make Dad sign away on a new facility to grow your arcade business. Game on!

When it comes to the arcade business, things get pretty interesting; for one, you’ll need to actually play the games to increase their popularity (and therefore earnings). When you’re first starting out, this can be pretty annoying to balance against doing other people’s laundry, but after awhile you’ll find yourself roaming your own arcade and playing each cab to your heart’s content. As for those games, each one has the ability to be pretty addicting. From Race and Chase (a literal GTA protoype mixed with Pacman) to air hockey, from Stack Overflow to DRR, the games in Arcade Paradise will have you bouncing from cab to cab, playing smaller titles for the bulk of your gaming experience. 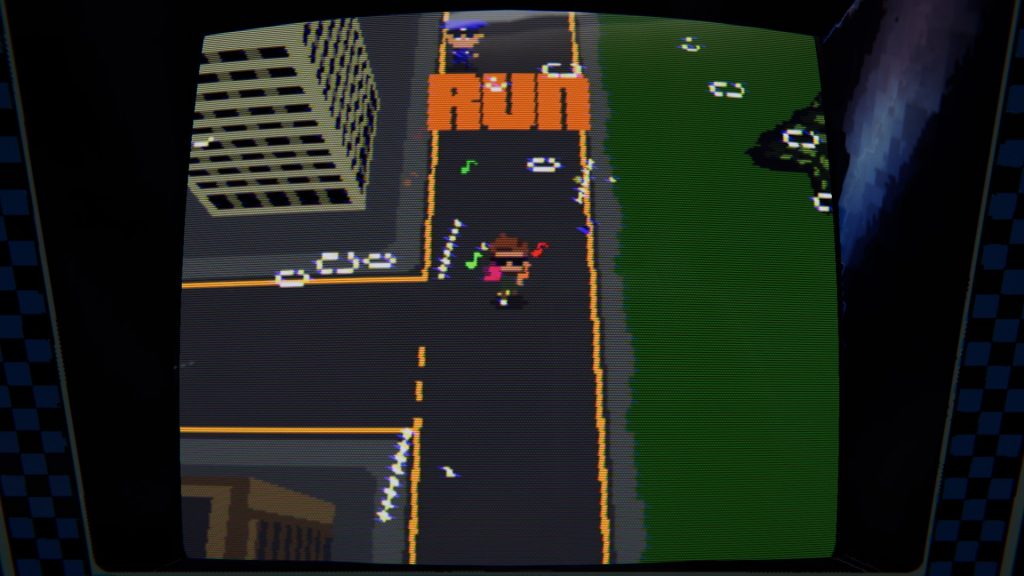 Another fun facet of Arcade Paradise is customizing your arcade, as placement of cabinets is critical to your financial success. For example, placing popular cabinets next to not-so-popular ones will increase the latter’s popularity, allowing you to make even more money than before. But I think my favorite aspect was the PC, which felt pretty meta. I don’t remember the last time I played solitaire and minesweeper on my own computer, but in Arcade Paradise I found myself wasting a huge chunk of my day there, oddly enough. Let’s just say that the one thing you will never run out of in Arcade Paradise is games!

Although Arcade Paradise was largely a positive experience, I have some complaints. The early game grind of mixing laundry with gaming is downright tedious. It’s hard to want to pull yourself away from a game to go do someone’s laundry for them at a self-serve laundromat. Additionally, it’s pretty clear that your dad does not agree with this whole arcade business, but will reward you with pounds sterling for achieving milestones in some of the games. Now, I’m not going to turn down free money, but… you know. Make it make sense. Oh well, at least the games you can play truly are a blast.

Arcade Paradise is a fantastic management sim for those who love the genre. It may be asking a lot of players to prioritize other people’s laundry over games upfront, but the payoff is a literal heaven for those who have always wished to build their own arcade and play every game within it for free. If you enjoy a good management sim and love the idea of hopping from game to game to game as a major mechanic, Arcade Paradise is worth its weight in quarters.

Full disclosure: This review is based on a copy of Arcade Paradise provided by the publisher.