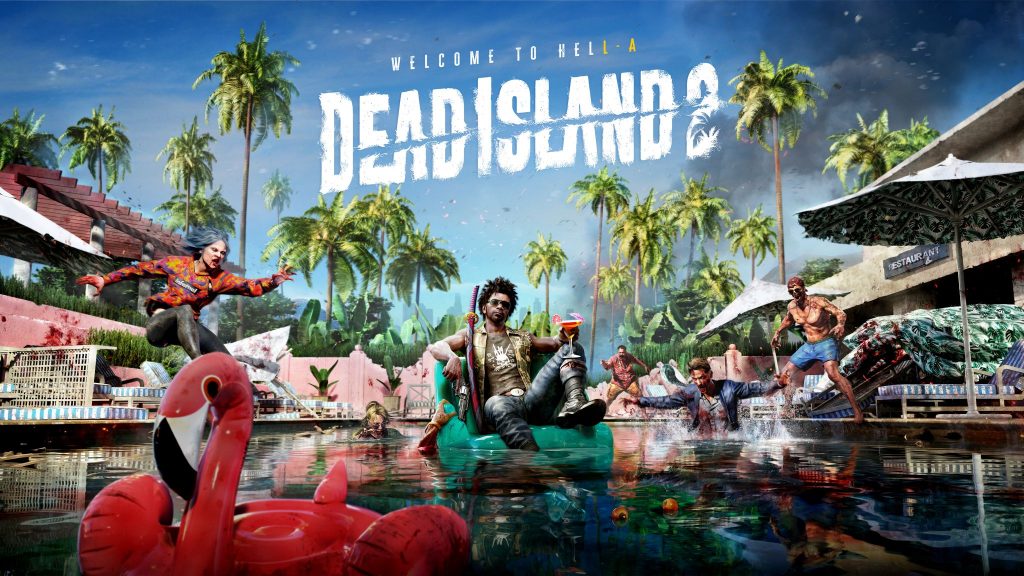 It’s been a minute since Dead Island 2 got announced. In fact, it’s been eight years, three developers, and a pandemic of our own before the action-RPG shambled its way into public view. But has it been worth the wait? Based on this 30-minute hands-on demo I got at Gamescom 2022, it could be.

“Bucket loads of blood,”; “Visceral combat,” and “Gore tech” were the keywords thrown around with glee by game director David Stenton when we talked about the key pillars of Dead Island 2. It’s clear that Stenton and Dambuster Studios understand what the action-RPG is all about, and what its players like to do.

To support those pillars, Stenton and his team created the Fully Locational Evisceration System for Humanoids – or FLESH for short – to fully dissect, dismember, and discombobulate hapless hordes.

And my God, it works well. 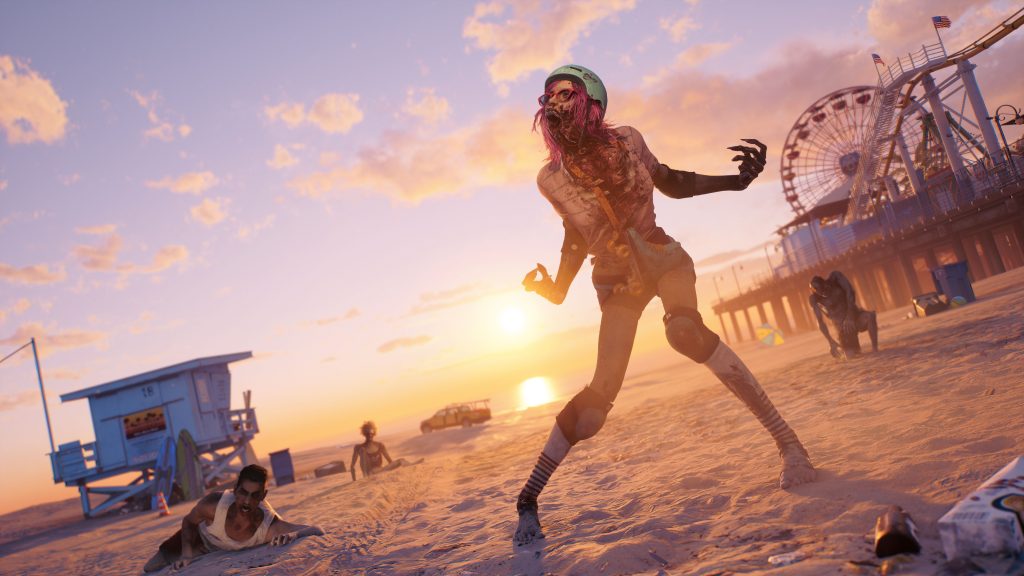 In the hands-on demo, I was thrust into HELL-A, what publisher Plaion is dubbing the developers’ interpretation of apocalyptic Los Angeles. Almost immediately, I was greeted by scores of undead in pitch darkness on some idyllic beach overlooking a shadowy pier.

The first chap that came towards me had no idea what hit him as I flung my katana straight at his head, scalping him, with almost comedic levels of blood pouring out of his decapitated body. My next target got eviscerated by my pair of electric claws, stunning and shocking it as I disemboweled the poor sod.

Truly gruesome stuff, but according to Lead Narrative Designer Ayesha Khan, it’s essential to have this disconnect between the gruesome in-game actions you take and the light-hearted nature of the game and its plot.

She described an earlier sandbox build of the game, with a poor zombie in a “little grey box, looking sad.” Khan went on to say, it felt “bad” to chop the poor thing up without a lighthearted plot, setting, and dialogue to create this juxtaposition between the terrible actions you’re taking in the game, and, ultimately, the game you’re enjoying.

But for the most part, I think Dambuster Studios has struck the right balance between a light-hearted tone without completely overdoing it. I know it’s early days, but it felt distinctly different to Dead Rising; a game that I think veers too far into silliness.

Khan didn’t reveal much about the plot, but did say there won’t be “big exposition dumps” and instead opted for a more accessible story that “shares its universe with the first Dead Island.” Ayesha also teased there’s going to be lots of “little details for those paying attention.”

Going back to the demo, what interested me a great deal was the tactical approach to combat. Unlike its contemporaries, Dead Island 2 rewards carefully planned assaults instead of mindlessly slashing and smashing your way to success.

It’s clear combat has been a huge focus for Stenton and Dambuster Studios. In fact, he said that he didn’t want Dead Island 2 to be “just a game you can mindlessly slash your way through.” He alluded to equipment – or curveballs – as he and the team refer to them, as essential tools to turn the tide of combat in your favour.

For instance, the demo had a tendency to throw a lot of enemies at you all at once. To avoid being overrun, I frequently used utility equipment such as Molotovs and the delightful, flesh-stuffed ‘meatbox’ to distract and occupy hordes as I whaled on them with my sword.

I felt the exclamation mark for Stenton’s approach to combat was bringing back the weapon parameters and modification system from Dead Island and implementing it well. In the demo, recently turned firefighters were immune to Molotov cocktails I was throwing at them; water-drenched zombies took more damage from the electrical trap I set, and some bigger, nastier baddies didn’t fall for my meatboxes. 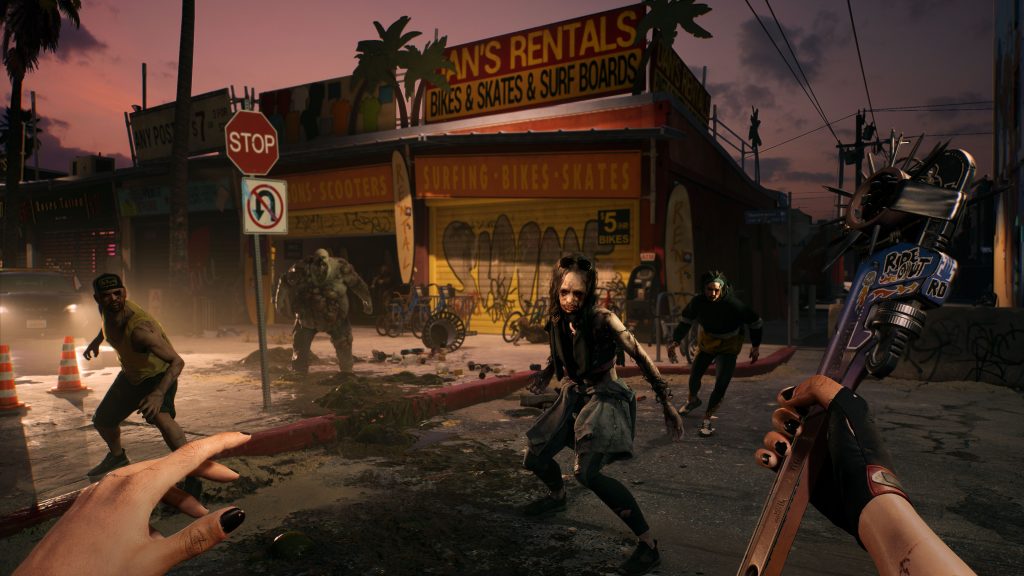 It’s worth saying this to be clear: combat in this game feels very satisfying. Slashing weapons feel sleight and deadly; blunt weapons feel heavy and crushing, and firearms feel snappy and precise. Speaking about weapons, unlike other games, you don’t lose them when they break after use. Stenton pointed to the numerous workbenches scattered across the game where you’ll spend resources to repair them.

According to Dead Island 2’s recent trailer, you get to play as six diverse characters, each with their own skills and talents. In the demo, I played as Amy, who Khan described as a “snarky optimist.” She also talked about Jacob, a “Mick Jagger-styled character.” However, she was pretty tight-lipped on the rest, not wanting to spoil any surprises.

Coming to the end of the demo, after navigating an amusement park stuffed with a significant variety of baddies, including spitters, tanks, and variants of both, I came up against a boss. It was a hideously disfigured clown, with blades grafted in place of its arms and legs. It stalked Amy up a ferris wheel, and before I had a chance to see more, my time with the demo abruptly ended.

Like the scores of undead I’d spent the last 20-minutes or so dispatching, playing Dead Island 2 has left me hungry for more. The game is set to release on the 3rd of February, 2023 – just five months away – and it’s tremendously polished already. 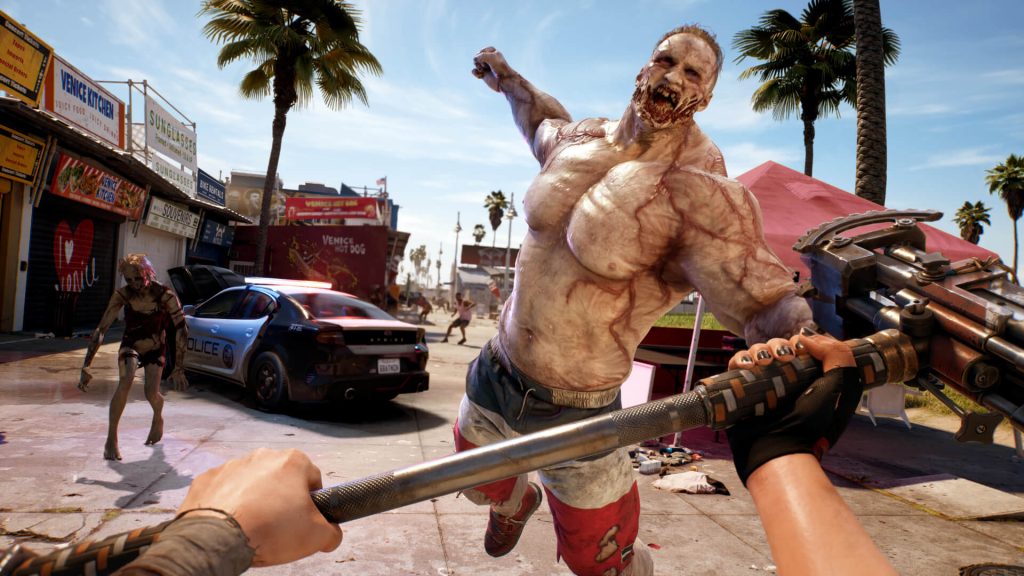 My only concern is that what does Dead Island 2 offer that Dying Light and its contemporaries don’t? As I was playing through the demo, I felt I had the answer to that question, so when I asked Stenton and Khan at the end of my interview what they thought, they flipped it back on me and asked me what *I* thought. And here’s what I said:

“I feel that, unlike Dying Light, Dead Island 2 offers a more tightly-focused combat loop, as well as a setting and story that doesn’t take itself so seriously, which can be quite refreshing in a genre that tends to take itself too seriously.”

Will Dambuster Studios stick the landing in the full release? From this first impression, I wouldn’t count out the Nottingham-based studio quite yet. 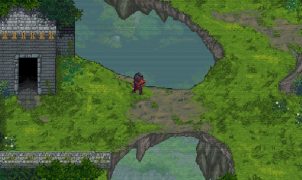 A deeply satisfying roguelike Now that I’ve played Tangledeep, I finally know what I want to be when I grow up. I’m going to be an Edge Thane. Something about…