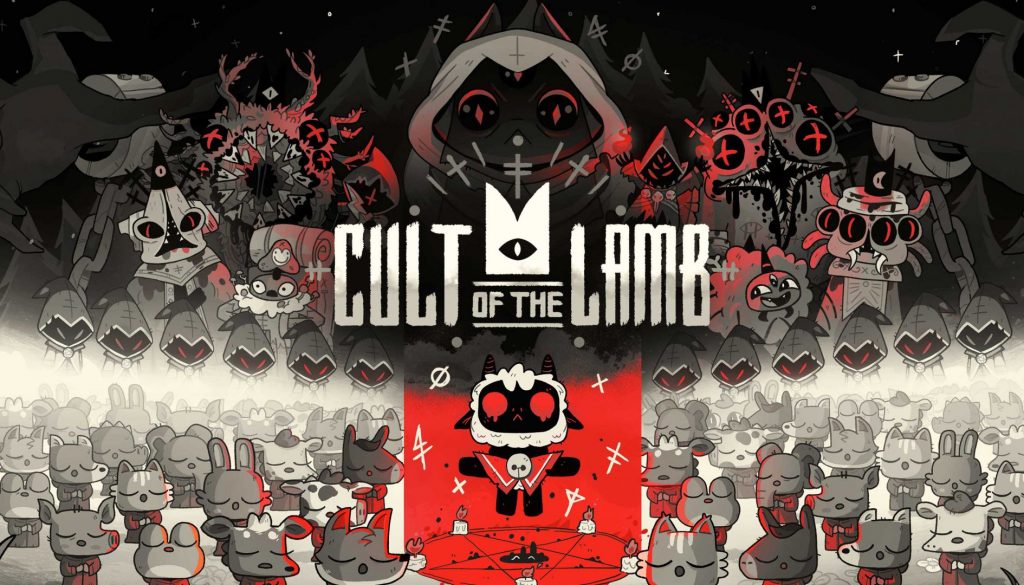 It’s kind of hard to believe that the Satanic Panic was actually a thing at this point. I mean, it was, what, only like 40 years ago or so that we had people worried that the youth of that time was being corrupted by popular media? Sure, at that time, it started out with uptight parents and people at the more extreme ends of certain sects being concerned primarily with heavy metal music and Dungeons & Dragons, but video games eventually got their lumps, too. Remember when Pokémon was supposedly evil because you were summoning demons in those games? Good thing they never caught wind of Megami Tensei! Anyway, all of that’s long gone now. We’re at the point where people can openly and freely make things like Cult of the Lamb—a game literally centered around “satanic” (okay, he’s not technically Satan, but, I mean, come on) worship. And, as a God-fearing man myself, there’s really only one thing I can say about this game… it’s absolutely phenomenal.

Lambs to the Slaughter 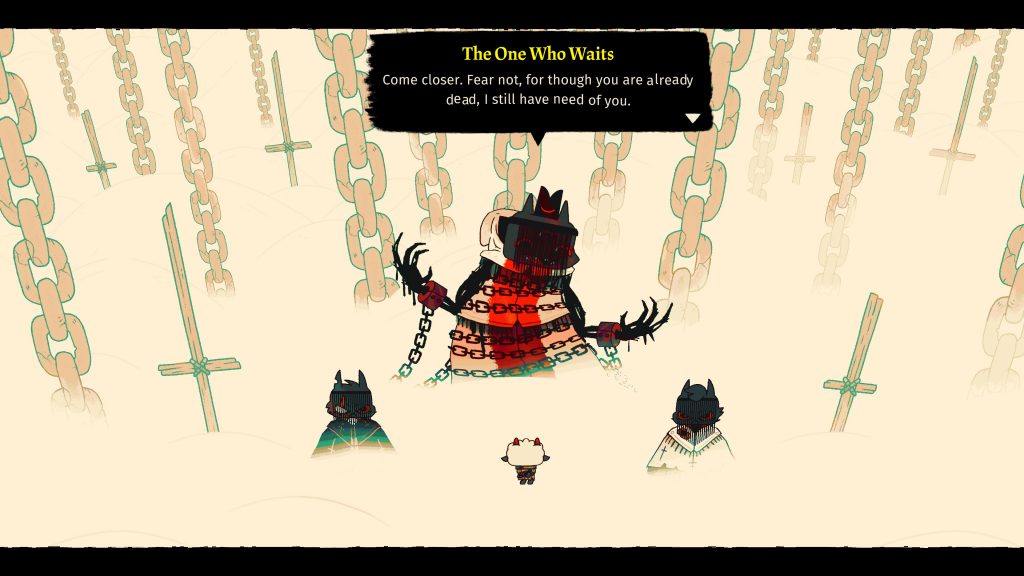 Phew! For a second, there, I thought that this was going to be a REALLY short game.

Cult of the Lamb begins with you playing the part of a sacrificial lamb—quite literally in this case—as an offering to the four Old Gods who seemingly rule over all. The bad news? This isn’t Skyrim. After putting your head on the chopping block, it immediately gets lobbed off. You die within the first few minutes of the game. Fortunately, that’s not where your story ends! It seems as though another entity outside of the Old Gods exists known as “The One Who Waits,” and, like you, is in a bit of a predicament. You see, The One Who Waits is actually super-duper strong—like, way stronger than the Old Gods—but those pesky Old Gods worked together to seal him up. The poor guy can’t do a thing on his own! He needs help! But, hey, so do you—so he decides for you that you two are going to make a deal. You get to come back to life (not just once, but as many times as you need to), and, in return, you’re going to create a cult for him and kill the Old Gods. Woah, what a bargain!

Focusing more on gameplay than storytelling, Cult of the Lamb’s story isn’t necessarily at the forefront of things—but that doesn’t mean that it doesn’t exist. Like many other roguelikes, Cult of the Lamb takes a drip-feed approach to giving the player its story. Despite being incredibly powerful themselves, the Lamb isn’t much more than a pawn, meaning that they, too, learn about the world around them with the player—primarily through conversations with other creatures through their adventures. It’s a standard method of storytelling with games like this, yes, but it works incredibly well. 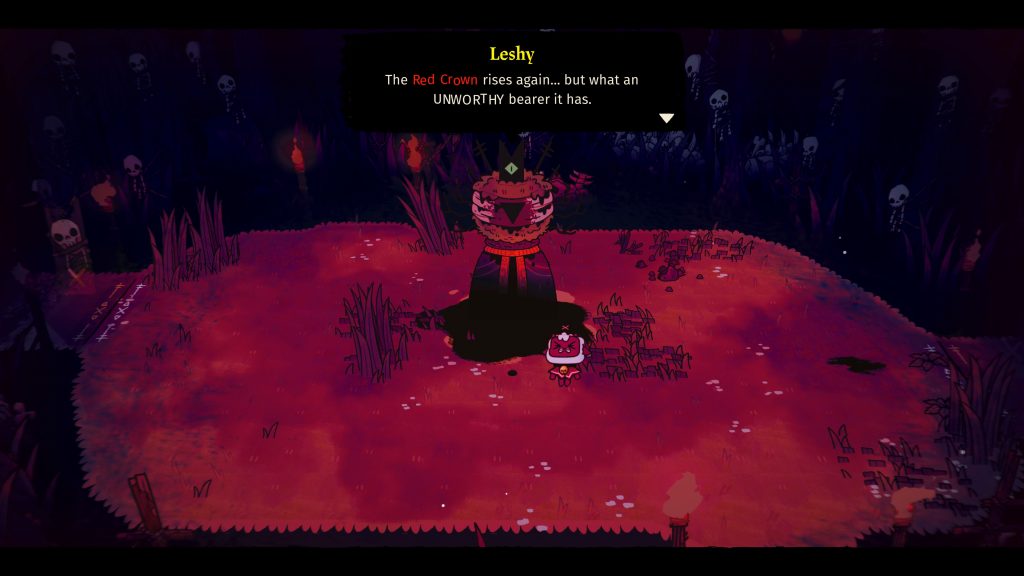 If I’m so unworthy, why don’t you just take it from me…?

Whether done on purpose or not, I also can’t help but feel that Cult of the Lamb’s art design also helps to tell its story. If you didn’t know what was going on and only caught brief snippets of gameplay, you might be tricked into thinking that the game was something more akin to Animal Crossing. And, in a way, it is (the sim part, anyway). It’s a bunch of extremely cute animals living their lives—and, if you’re playing the game correctly, they’re living their lives happily. In reality, however, that happiness—that cuteness—is basically a mask. These aren’t villagers, these aren’t your friends—they’re your flock. You’re brainwashing everyone into servicing you so that you can become powerful. They’re pawns, they’re scum, they’re a means to an end—and you know this. Treating them as equals is quite literally impossible in this game, and it wouldn’t get you anywhere, anyway. You, the Lamb, might look as cute as them, but, in reality, you’re as ugly and as terrifying as the Old Gods and The One Who Waits—you’re just better at keeping your mask on—and the fact that the game is able to convey this so well, whether intentional or not, is beyond impressive.

A Shephard and His Flock 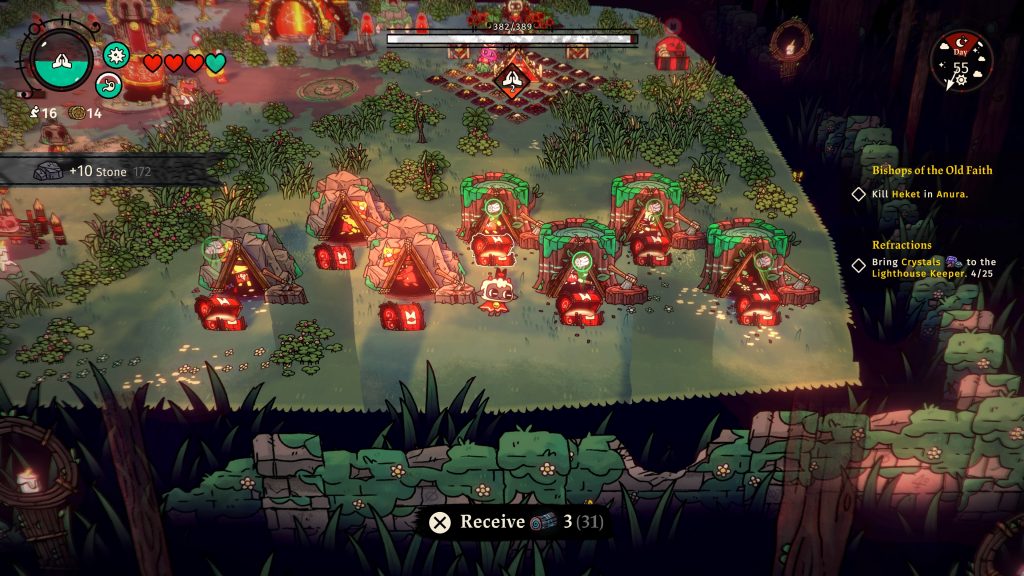 Aww, look at all of my cute ‘lil worker bees!

The One Who Waits presented you with two primary tasks upon your resurrection, and that wasn’t just story-related fluff. Rather than focusing on one thing, Cult of the Lamb features cyclical gameplay that has players building up their cult and venturing out into the wilderness to kill off the Old Gods. I’ve got to give Massive Monster credit where it’s due, when it comes to the whole cult-building sim stuff. While I was fairly confident I knew what I was getting into when it came to the dungeon crawling (I wasn’t let down by that, by the way), there was a lot more going on with the sim aspect than I had originally anticipated.

Cult Care 101 is pretty simple. You grow your flock by rescuing them from other cults while out and about—and, later on, you can even purchase cult members from a giant spider who flat-out tells you that he’ll kill and eat them if you don’t buy them from him. Cult members are important because they provide Devotion—which is used to upgrade your cult via Divine Inspiration—through worship, collect resources for you, and will attend your sermons—allowing you to sap their spiritual energy in order to power yourself up. Unfortunately, cult members are also living beings… and they’re also all kind of dumb. So, you know, you’ve gotta take care of them. This means that you need to cook for them (yes, you, the leader, are also the chef), provide housing, punish any naughty dissenters, and so on. It’s a lot, but the system builds off of itself pretty well, making it feel pretty seamless overall. The only real issue that I ever ran into is how quickly followers seem to become elderly/die of old age, but that might be because I was playing on Hard difficulty (I was never able to find any confirmation of that online). There’s also the potential for this to feel a little repetitive if you weren’t planning on spending much time doing sim-related stuff, but, as someone who typically enjoys it, I never found myself minding it too much (and I generally quite enjoyed it!). 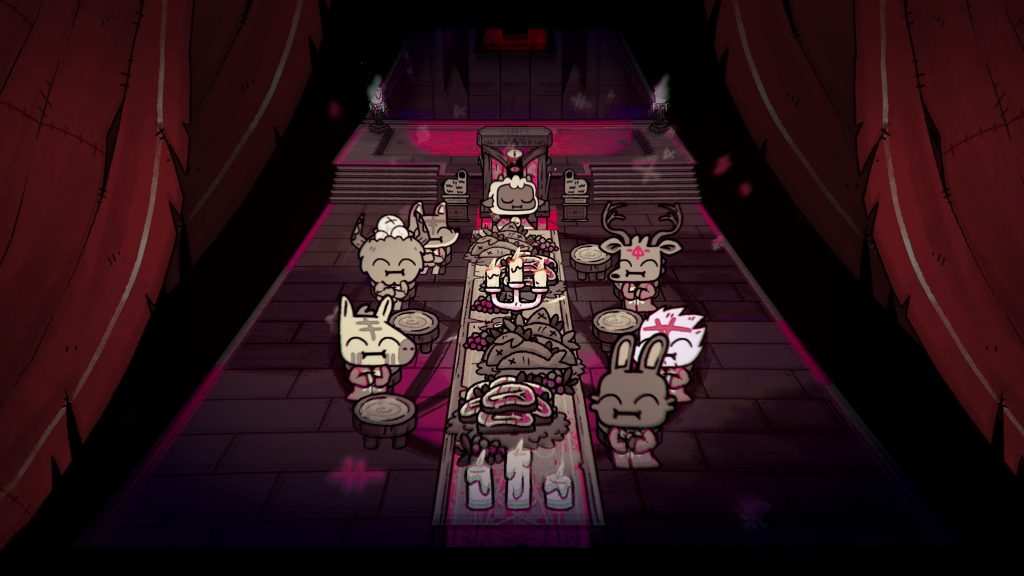 Hooray, a feast! Doesn’t this make everyone want to bend to my will even further?

If you know anything about cult psychology, then it shouldn’t surprise you that, in real life, cults often thrive on things like conformity. Everything needs to be bland, everyone needs to be the same, and so on… Fortunately, this isn’t a scary, real-life cult—it’s a scary, video game cult, and that means that you can be as gaudy as you’d like! Surprisingly (or perhaps not), Cult of the Lamb has a ton of deco objects for players to unlock and craft, meaning that, despite you literally being the puppet of an elder god, you can also have a commune that’s legitimately fun, fashionable, and fabulous. Pave the streets in gold, give your followers fancy houses—your cult, your rules! Just, uh… try to go out and cleanse those non-believers every once in a while, yeah? 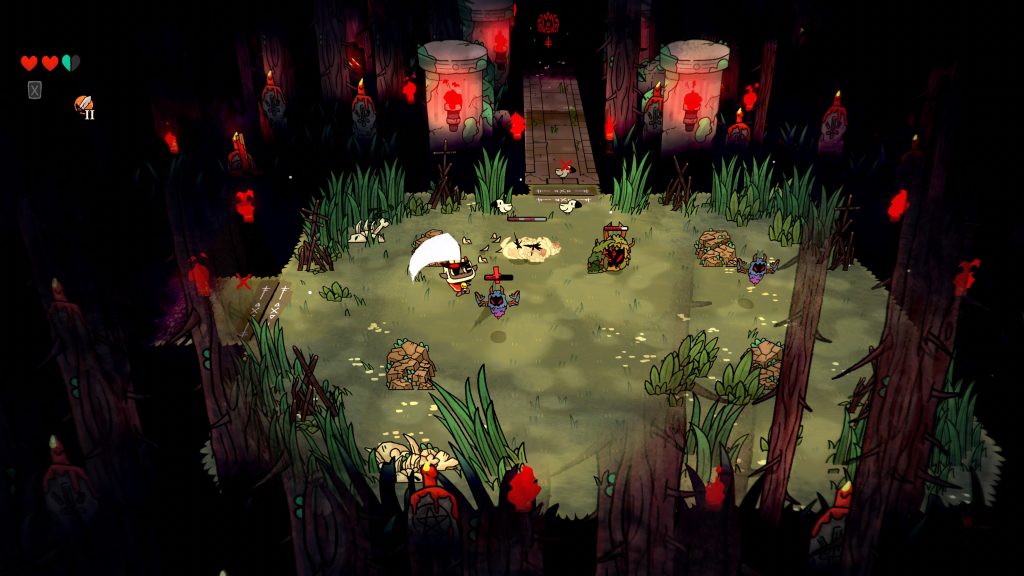 Combat is simple, but smooth and satisfying.

The fact that there are so many roguelike dungeon-crawlers out there means that a lot of them feel the need to do a little bit extra—include some kind of unique quirk or mechanic to help them stand out from the crowd. That’s completely fine. Sometimes that works. And, when it does, it’s really exciting! Cult of the Lamb opted not to do that, though. On the contrary, in terms of mechanics, it’s one of the most simplistic roguelike dungeon crawlers that I’ve played in years. But it’s also one of the best—and that all boils down to the fact that they focused on the basics so hard that they essentially perfected them.

Dungeon-crawling in Cult of the Lamb is extremely basic. You begin your run with a randomly selected weapon and curse (this game’s form of magic) and the ability to dodge roll. Along the way, you’ll pick up tarot cards that give you passive buffs—like increasing attack speed or the number of resources gathered—and can occasionally change weapons and curses if the game feels like it. That’s it. Aside from the fact that weapons have unlockable properties—like poison, critical, etc.—you really aren’t dealing with much. But, oh man, this is probably the most responsive game like this that I have ever played. I don’t think I’ve ever felt more satisfied with character controls than I have with Cult of the Lamb, and, because of that, I’ve found that I don’t need a bunch of gimmicks to get through things or enjoy a romp through a dungeon. Just give me a sword, and an exploding ball of goo, and I’m good to go!

Unless you’re a well-meaning-yet-misguided parent from the 80s who magically found themselves transported to the year 2022 (in which case there are other things I would be worrying about), you really have zero reason not to play this game. Cult of the Lamb is the evil-worshipping, cult-building, god-slaying video game with a perfect creepy-cute aesthetic that I never knew that I wanted—and I’m so incredibly glad that it exists.

Full disclosure: A Cult of the Lamb code was provided to Hey Poor Player by the publisher.