Set Up The Comedy

With the introduction of Jennifer Walters’ powers out of the way last week, She-Hulk: Attorney At Law is free to move on from setting up her history to… setting up the season. Yes, Superhuman Law is still mainly set-up, but it’s far more successful than the series’ first episode because it doesn’t lose sight of the fact that this is supposed to be a comedy and is consistently funny. It also helps that instead of focusing on only one aspect of Jennifer’s life, it jumps around and sets up different parts of the show. We spend time dealing with the fallout of Jennifer going public as the She-Hulk, her family situation, her new professional role, and the client who promises to be a major part of this first season.

You’d think that saving a jury from being smashed with a desk would lead to excitement and praise, and it does, from some people, at least. Jennifer is greeted at her bar as a hero, already dubbed She-Hulk, which she isn’t a big fan of. It’s better than Chick-Hulk, at least, another suggestion briefly thrown out. It turns out, though, that her bosses aren’t entirely happy with her result. She won her case, but the result is thrown out when it’s argued that saving the jury’s life probably unfairly biased them, which, you know, is fair. Fearing the fallout from this case and possible future ramifications, her boss decides to cut ties with her after making her transform back into a human and feel the full impact of the alcohol She-Hulk was putting away.

It turns out, finding a job as a superhero is a lot harder than it otherwise would be. Jen might be fully qualified, and a very talented lawyer, but other law firms have the same fear her old one did. What if something goes down badly in court? If any act of heroism could lead to a case being thrown out, that’s a problem. It leaves Jen in a place where she’s considering what other things she could do with her life, like becoming a mascot in a Swiss village. (Marvel fans should watch the sidebar of the website she’s viewing for fun references to Eternals and a certain Marvel character who has yet to appear in the MCU but is almost certainly on their way)

It’s Hard Out Here For A Hulk 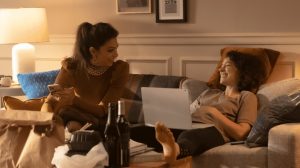 While trying to figure out what comes next, Jen spends some time with her family in what might be my favorite stretch of this episode. They spend time talking about the impacts of having another Hulk in the family and are regaled with the tales of success around her cousin Ched, who recently was promoted to manager at the Best Buy. I personally wouldn’t trust Ched (a perfect name for this character) to manage himself, let alone anyone else, but they’re well-drawn characters, and things get very funny. I’d love to see more of this group in future episodes, and it would be interesting to hear more than the hints we get at their feelings around Bruce and The Hulk as well, though those might not fit well in a comedy.

Thankfully a job offer does come along, though with caveats. The law firm of GLK&H, the same one Jennifer beat in her earlier case before the results were thrown out, was impressed by her work, and they want to hire her. They don’t want her as just any attorney, though. GLK&H are opening up their own superhuman legal division to handle all the issues the amount of superpowered people in this world have created, and they want She-Hulk to be the face of it. The key, though, is that they want She-Hulk and not Jennifer. She’ll be working in this persona, though thankfully, her suits seem to be able to handle the change back and forth more frequently than really makes sense. It’s a tough choice, but when you see her new office’s view, you can see the appeal. Maybe a great metabolism isn’t the only advantage of being a hulk.

There’s one other condition to this hire too. Jen’s first case will be representing Emil Blonsky, more commonly known as the Abomination. The villain of The Incredible Hulk all the way back in 2008, Abomination was missing in action for thirteen years before he showed up briefly in last year’s Shang-Chi and the Legend of the Ten Rings. It turns out, that wasn’t a throwaway cameo either. His appearance there directly ties into Superhuman Law as Jennifer debates whether she should represent the man who tried to kill her cousin all those years ago in his parole hearings.

Tim Roth returns as the character, directly referencing the events of The Incredible Hulk in a way that the MCU has mostly skirted around over the years. He does a fantastic job laying out the case for how he’s changed since his origin and even that he got a bit of a raw deal in the first place. Roth is a fantastic actor and lays on the charm in a way that is persuasive enough to get Jen on board. How sincere he is remains to be seen, but it’s fantastic to see this sort of call back to an early era of the MCU and the potential of being able to bring villains back over time. It’s the exact sort of argument fans were making for years when Marvel seemed to want to end every movie by killing its villain. I’m glad that Blonsky survived his film to make this possible, and I can’t wait to see where his story goes from here. Between talk of seven soul mates, his turn to poetry, and a promise of a payoff for his Shang-Chi appearance to come, it looks like Roth will continue to have great material to work with.

While there was still a lot of set-up in this episode, Superhuman Law does a far better job than the first episode keeping things funny along the way. I look forward to seeing what She-Hulk: Attorney At Law can do when it gets all of this exposition out of the way, but two episodes in, I’m confident that this is a show I’ll be sticking with.

Once Upon A Time   I’ve always been a huge fan of fairy tales. Whether of the horrifying, traumatizing Brothers Grimm variety, or the watered down Disney versions. They…