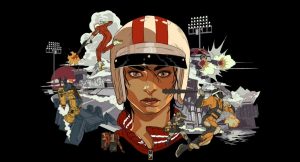 With style to spare and a flow that, at its best, feels like video game nirvana, Rollerdrome should be right up my alley. I love little more than the sort of game you can slip into so deeply that the controller feels like an extension of yourself, where mastery makes you feel like a god. At times it achieves everything I could have asked it to do, and it’s worth the time of those wanting a twist on the extreme sports genre. The flow state it works so hard to achieve is unfortunately interrupted a bit too often by a seemingly never-ending list of mechanics.

The Not So Distant Future 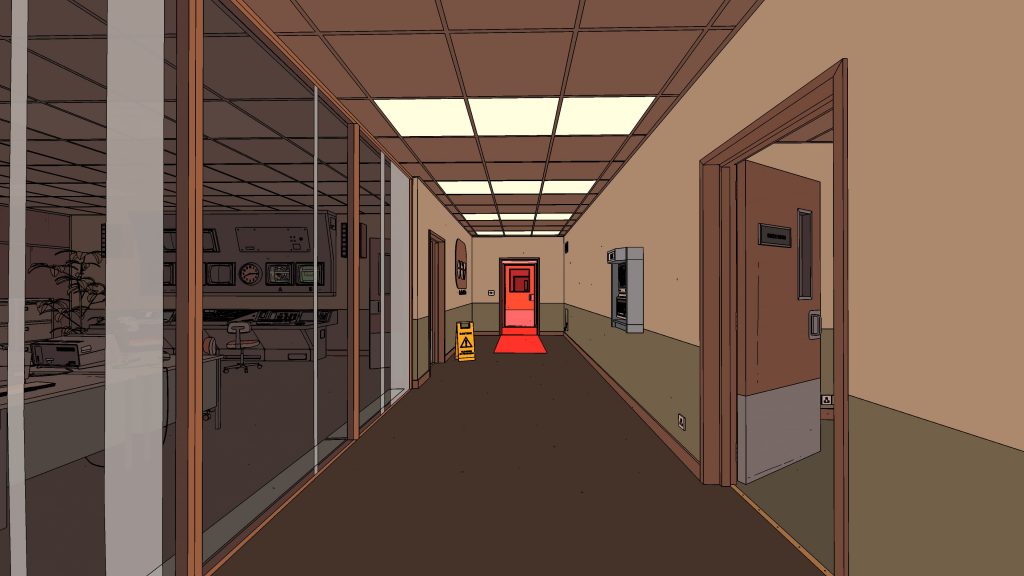 In the year 2030, a corporate-owned hellscape of a world tunes in to watch the new extreme sport of Rollerdrome. Think destruction derby with guns, and you aren’t too far off. A lone skater enters an arena filled with house players whose job is to take them out. You have guns, they have guns, you need to defeat all of them to move on while competing for the best time and score against other competitors. While losing doesn’t necessarily mean death, the stakes are very real, and competitors definitely need to have a good life insurance policy ready to go.

Kara Hassan is the newest competitor on the Rollerdrome circuit. Not much is expected of such a fresh-faced competitor, but with big loans financing her entry, she has every incentive to try to get to the top and earn the prize for the season champion. Along the way, you have a chance to explore various locales such as the locker room and a train, getting a deeper look into this world. Find notes written on people’s desks, newspapers sitting around, and check private messages sent to Kara as you get a hint into some real conspiracies going on behind the scenes.

Story may not be the focus of Rollerdrome, but players have the option to lightly touch on what’s going on behind the scenes or to dig a little deeper. The world-building here is subtle, but very well executed, and I loved how the developers didn’t set this in the distant future. There’s some rather impressive tech on display, but nothing that seems out of the realm of possibility for the next decade. What we see is the continued evolution of entertainment taken to an extreme, but one that allows the developers to make a statement. It’s just a statement you can mostly gloss over if you just want a fun game where you shoot things. 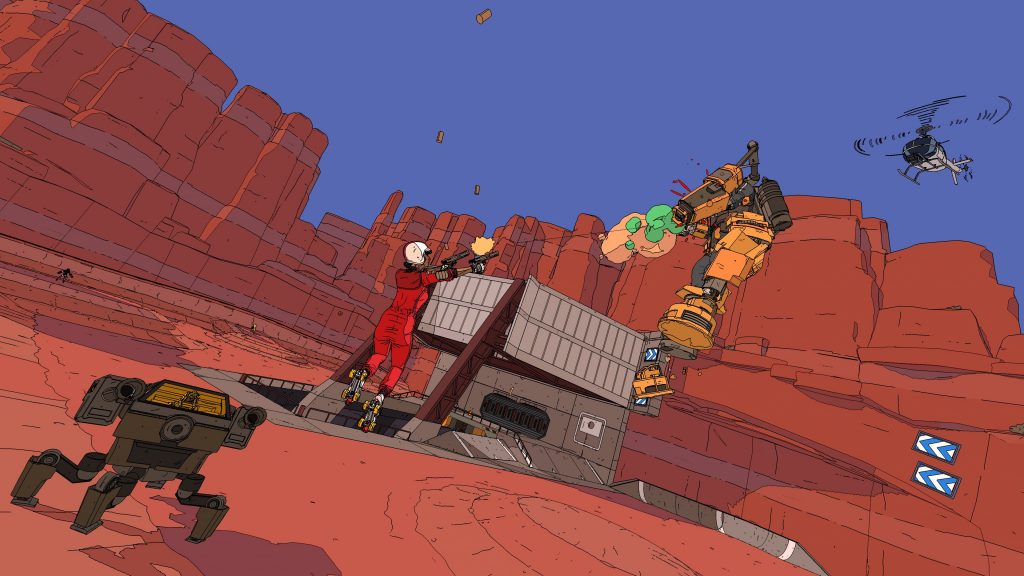 Once a level starts, you’ll be right in the thick of the action. Skating around with a gun in your hands, your main objective is simple. Shoot all the house players who come in various styles and don’t die. Levels start off simple with no edges and a limited number of places to explore, but they’ll quickly grow much more varied with gaps to grind over, multiple rooms, and more places for your enemies to hide.

Along the way, you’ll need to be doing tricks and building combos as you chase high scores. The developers have fully integrated the tricking gameplay with the shooting by giving you a limited supply of ammunition in all of your guns which you reload by doing tricks. That means as you move around, you don’t want to skate; you want to grind. If you see a ramp, fly off it and do a grab or twist trick. Keep your guns full, so you can keep taking opponents out quickly and efficiently.

The Most Sincere Form Of Flattery 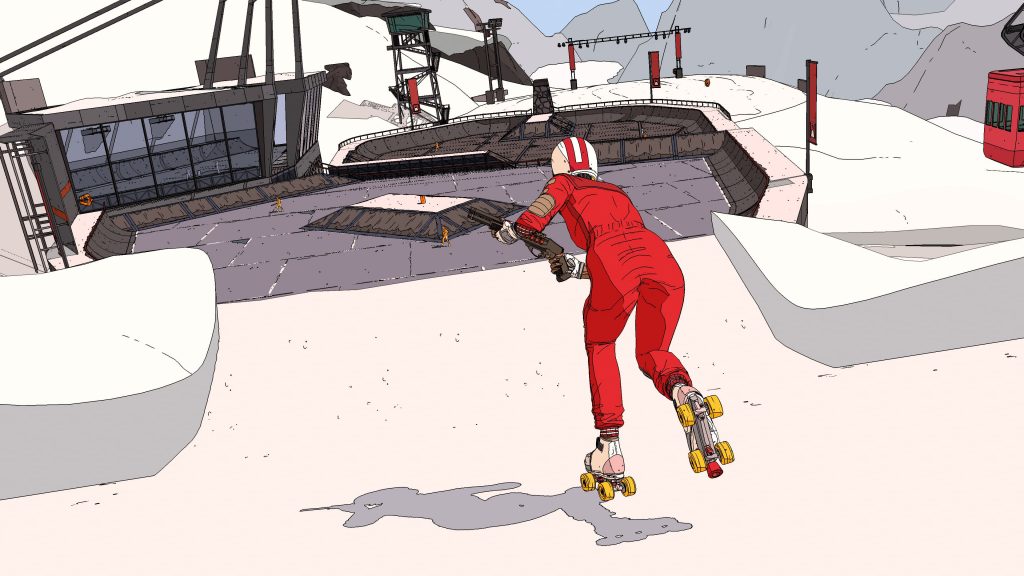 Each level also features a list of ten objectives that feels right out of a Tony Hawk game, though they tend to be a little more involved than you’d get in Tony Hawk. Or maybe it’s just that there’s more going on than in a Tony Hawk game, which means it’s harder to focus on completing these objectives. While no specific goals are required, you will need to complete at least a fair number of them. Levels are separated out into four different rounds of the Rollerdrome championship, and you need to have completed a certain number of goals to move on to the next level. They don’t all have to be completed in the same run. However, you can go back and go after just the ones your missing. Even if you die in a run, goals you had already achieved stay checked off your list, which is a nice touch.

Over time you’ll unlock multiple guns, such as a killer feeling shotgun and a grenade launcher, but even your initial pistols are always useful as different enemies have different weaknesses. Swapping between them is simple and necessary. All of these guns share a set of ammo, so it is never about conserving ammo but more about using the right tool for the job. At any time, you can hold down the left trigger to enter a slowed-down mode which helps you really take foes out as well, a nice twist. 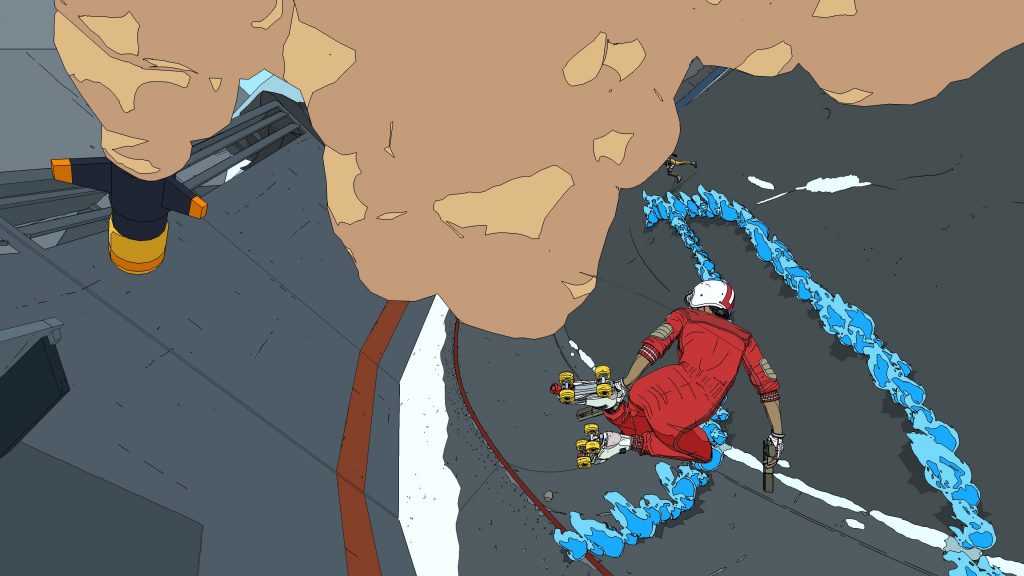 The biggest problem is that there’s just so much to manage. Between killing enemies, avoiding attacks, completing goals, doing tricks to reload your guns, using slow motion to build your combo, there’s a lot that the player has to be actively managing at any one time. When things are going smoothly, and you’re not focused on a couple of these things Rollerdrome can feel positively incredible.

Inevitably though, you’re going to realize you’re out of ammo, or your combo is going to end because you got mixed up a bit and didn’t kill someone fast enough, or you’re going to realize you aren’t knocking out many of the goals and you’ll need to pause and break up your flow to figure out what goals you need. It consistently took me out of the game, and once things fell off the rails, it was really hard to get back on.

It might have been easier to do so if the controls were more intuitive. Instead of aiming yourself normally, you push forward to start your character moving forward, regardless of how your camera is oriented. It takes some getting used to, and while it wasn’t too hard when my camera was behind Kara, corners, and turning can become nightmares in certain situations. With the game’s difficulty heating up quickly, these little pain points can go from minor nuisances to what force you to restart the level. 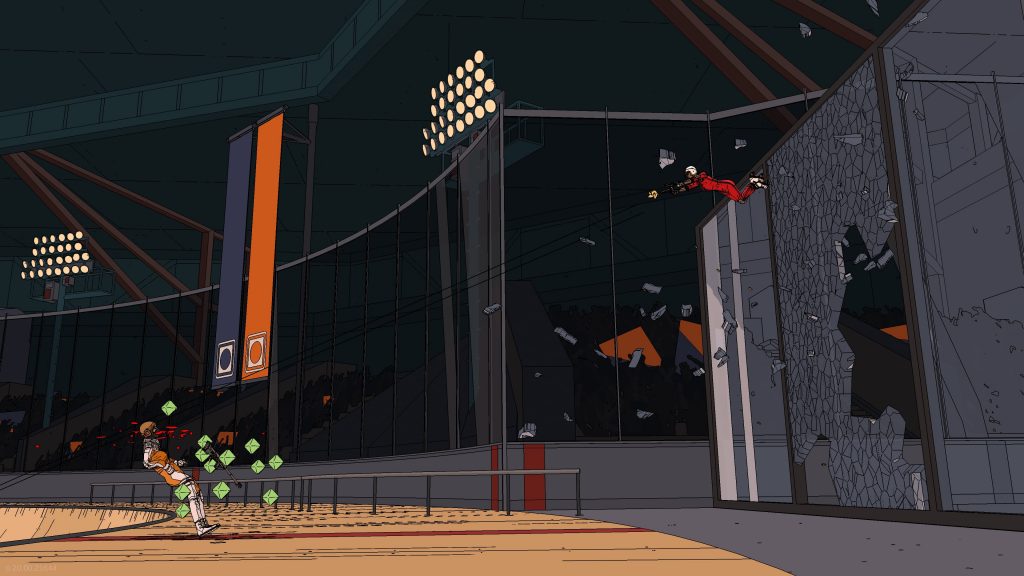 At least Rollerdrome looks incredible the entire way through. With a flat cel-shaded animation style that practically pops off the screen, it’s a visual feast. The soundtrack is great as well, really capturing the sort of 80s death sport vibe the developers are trying to capture.

There also are options to disable certain parts of the game if they aren’t serving you in the accessibility menus. Turn off damage entirely or make it so your guns auto-reload and aren’t based on tricks, or even disable the requirement to hit a certain number of goals to unlock new levels. Many players will feel a bit dirty getting around these, but when the game just feels a bit too busy all the way through, picking your least favorite of its many systems to excise isn’t the worst option.

When everything comes together, Rollerdrome feels incredible, but too often, things get buried under the weight of its many systems. While even at its worst, there is definitely fun to be had here, this feels like an incredible concept for a game where the developers needed to spend a little more time workshopping what aspects of it were really needed. It’s still a good game, though, and the foundation is in place for a sequel to be truly incredible.

Full disclosure: This review is based on a copy of Rollerdrome provided by the publisher. 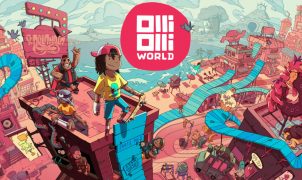