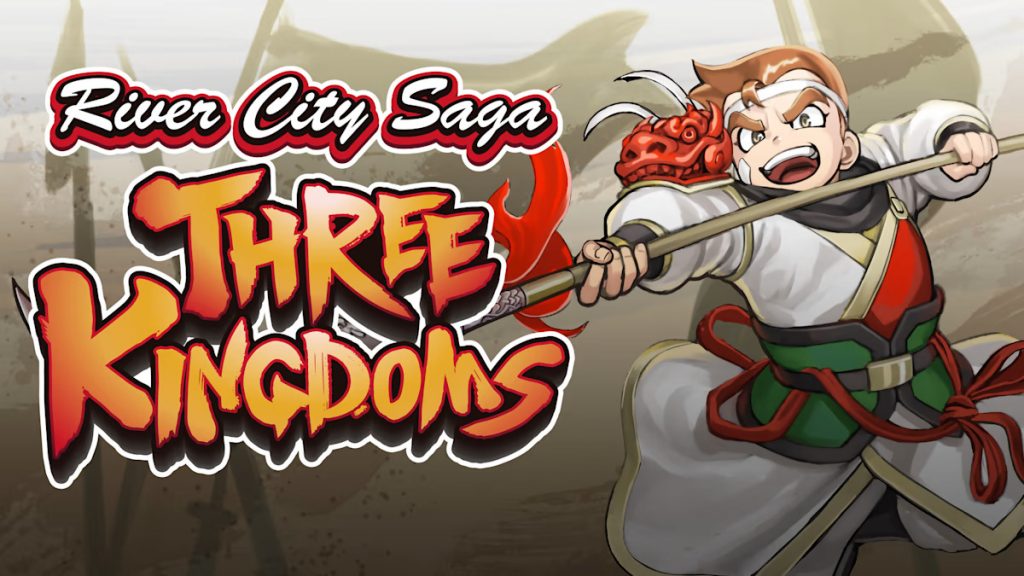 The River City, or Kunio-Kun as it is known in Japan, series has been finding ways to put a fresh twist on the same set of characters for nearly four decades. This series has seen games where the characters play volleyball, soccer, hockey, basketball, and track and field. Most often, though, it returns to the brawler genre, and River City Saga: Three Kingdoms definitely sits within that framework, though with the twist of putting familiar characters into a version of the Romance of the Three Kingdoms story. It provides a different vibe, but the gameplay here is sometimes too familiar for its own good. 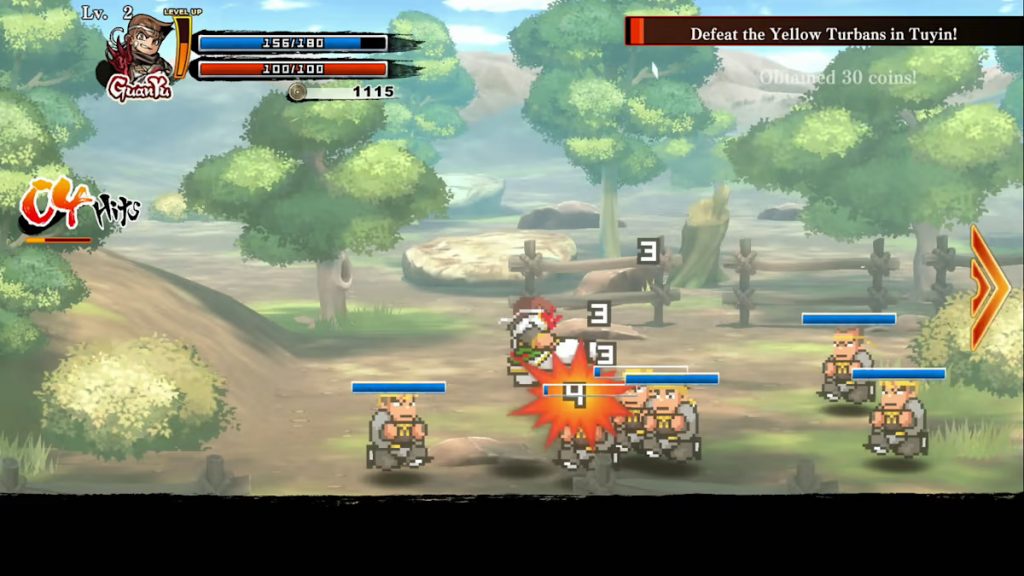 The River City brawlers have often set themselves apart from other parts of the genre by featuring RPG mechanics where you can level up and improve your fighter, and that’s very much the case in River City Saga. You play as Guan Yu, who becomes a sworn brother with two other fighters, teaming up as the Brothers of the Peach Garden to try to fight off the Yellow Turbans wrecking their homeland and return the land to peace.

Unlike the more linear brawlers, we’re used to, River City Saga offers an open world where you have a wide variety of areas to explore. While there is definitely a main mission at all times, the various cities feature a decent number of side quests to explore, even if a lot of them are simple fetch quests or just telling you to go somewhere and beat up a big crowd of enemies, very similar to how you beat up big crowds of enemies everywhere else. Getting around the world at least is rarely a pain as you can quickly use fast travel. This has a cost, but it’s a cheap one and well worth avoiding fifteen minutes of fighting battles that feel the same to get to your next mission. 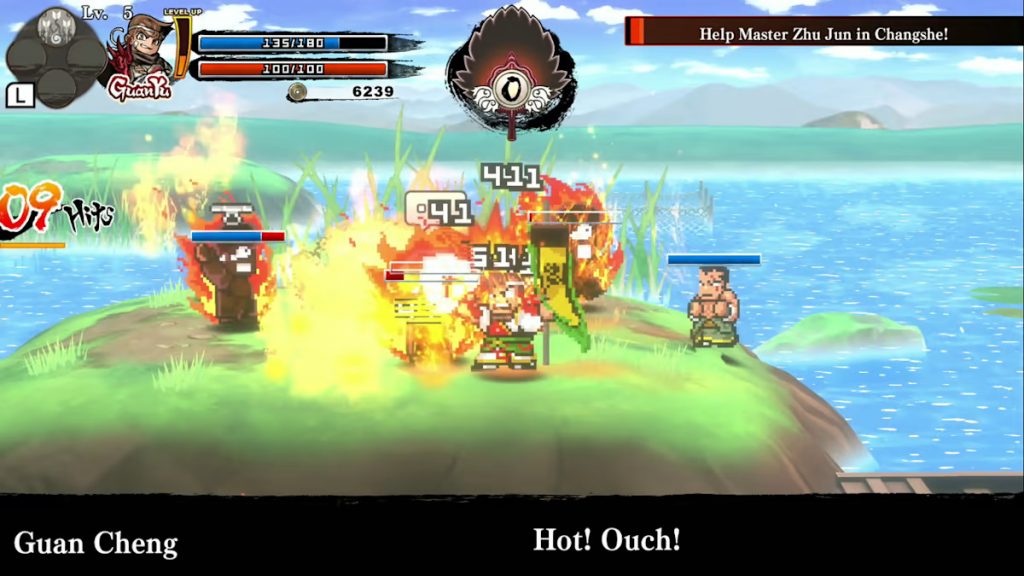 While RPG mechanics aren’t nearly as unique for a brawler as they once were, consistent progress definitely feels satisfying as you improve your character. Not only can you choose how to assign stat points for every level, but there are also tons of new moves to buy and learn, which can make you far more powerful. Some of these moves are highly impactful and can completely change your strategies in battle. I appreciated the ability to customize my character. The actual combat is also impactful. Punches, kicks, grabs, weapons, and throws are a simple set of commands, but they come together to let you beat up a whole lot of people.

Combat would be more fun, though, if enemy AI were more varied. Most foes seem to have one real mode, swarm. Often you’ll enter a huge area, but fight all the enemies in it within a single corner of the area because, by the time you fight the first enemies in the area, those from the other side of the area will have reached you. There’s also perhaps a bit too much complexity here for the game’s own good. You have equipment to add, multiple layers of special moves, and abilities to equip, and while some customization is nice, it can feel a bit overwhelming, especially early on. Over time you get used to all of River City Saga’s layers, but I never really wanted to spend my time on a lot of it. Most of these don’t add much complexity to the actual gameplay, making them feel like a waste of time.

We All Fall Down 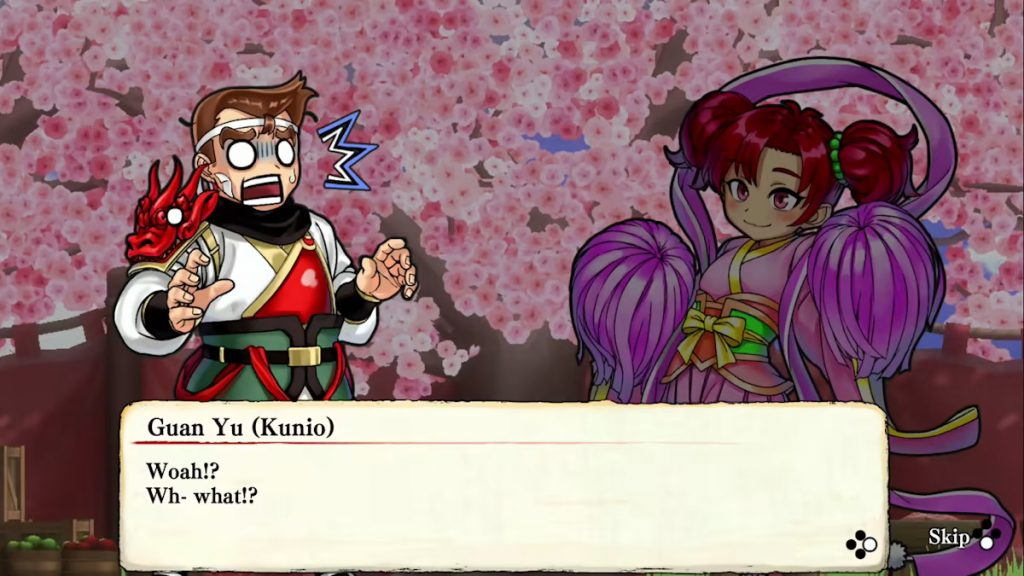 The strangest choice made by the development team is the one to focus so much on platforming. The controls in River City Saga feel right out of an old-school brawler, and there can be a certain charm in that, particularly in combat. They’re slippery at the best of times, though, and not suited to precision platforming. If this was just needed now and then, that would be one thing, but there are just too many areas where you have to make your way over a cliff or across a body of water. The development team had to know this was an issue. There are actually options to skip these areas by spending money. Why that was implemented instead of cutting down on these areas, though, I just don’t understand.

The old-school flavor translates to the look of River City Saga: Three Kingdoms as well. While backgrounds look modern, character models are right out of a game from the 90s. It shouldn’t work, but I kind of dig the contrast, giving the game a pretty overall look while still reminding you of its heritage. What works less for me is the humor that is consistently injected into what seem like serious moments. Jokes about things like copyright in a game set so long ago are bizarre and never really funny. Humor is, of course, subjective and this might work better for others, but for me, it felt like oil and water.

River City Saga: Three Kingdoms offers solid brawler gameplay and an open world that you can get around conveniently. Combat feels impactful, and the story even has its moments. Unnecessary complexity, slippery platforming, and a tone that never quite hits make this a game primarily for the series’ faithful and big-time brawler fans who have played most of the genre’s more successful recent releases.

Full disclosure: This review is based on a copy of River City Saga: Three Kingdoms provided by the publisher. 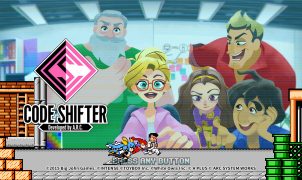 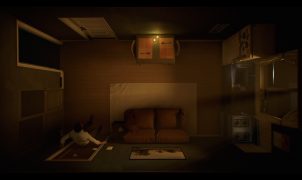 Twelve Minutes Review: Twelve Thrilling Minutes   Twelve Minutes is quite a ride. A small-scale puzzle box of a thriller, a remarkable amount happens to its three characters in…