Quintus and the Absent Truth Review: A Not So Mighty Mouse 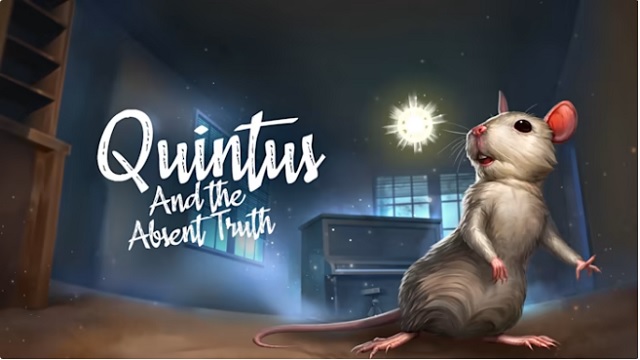 Sometimes a bedtime story just needs a little something extra to keep the kiddo interested. Well, horror’s a good place to start, right? Of course, most parents reading horror stories to their kiddos probably end up with bedwetting and nightmares. Quintus and the Absent Truth wanted to add some novelty thrills to the adventure! So does this bedtime story wrap up well for the young’uns? Or does it just make nightmares and bathroom accidents? Let’s find out!

Of Mice and Men 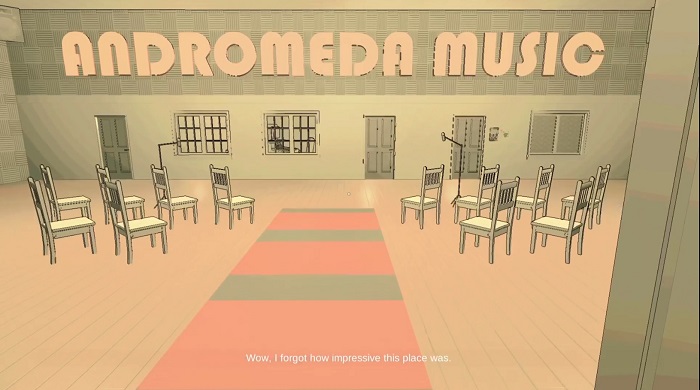 I guess even Earl de Darkwood had to have a humble start somewhere.

While the plot has a couple neat points and wraps itself up fairly cleanly, ultimately you’re getting something the length of a children’s fairy tale. You play as Alan, a well-regarded pianist that’s lost his touch, whose daughter Lydia has just been kidnapped. You venture to Andromeda Records, the record label that sponsored both you and your now-dead wife. Taking Quintus, your mouse companion, you venture into the depths of the record label to try and figure out where your daughter is and how to rescue her. Looking back on it, it does follow a whimsical yet semi-stable plot, but it gave me the feeling that I missed a lot of details along the way. It was like trying to get the gist of a longer running series by only watching the episode recaps. There’s enough to move things along, but the ride’s over long before you get a feeling that anything really happened and you feel like there was a lot more to the tale that you just missed somewhere.

As for the graphics and atmosphere, the key thing going for Quintus and the Absent Truth is an attempt to shoot for “less is more”. To some extent it works out. While some might be bothered by the drab environments when the lights aren’t plentiful, I’d argue that monotone color scheme kind of makes it stick out more, and this unique art style was what drew me to the game in the first place. Maybe they could have added just a few more details and vibrant secondary colors here and there, but it’s not a horrible way to go. Just keep in mind that the world does indeed appear drab and dreary when you dive into this adventure.

That said, the environments started really falling apart when Quintus gets involved. Playing as a mouse means that you are shrunk down and environments are bigger. This makes traversal of the now super-sized environments frankly tedious. You really don’t realize how devoid of details your environment is until you’re spending three minutes just getting to the other side of the room. I don’t know about the rest of you, but the mice I’ve seen darting around in my garage can haul ass pretty fast, and yet Quintus here gets a decent jog at most. Allowing for speedier traversal would also work in the game’s favor as it’d make the jump scares, as much as we aren’t fans of them, more pronounced and startling, as they should be. 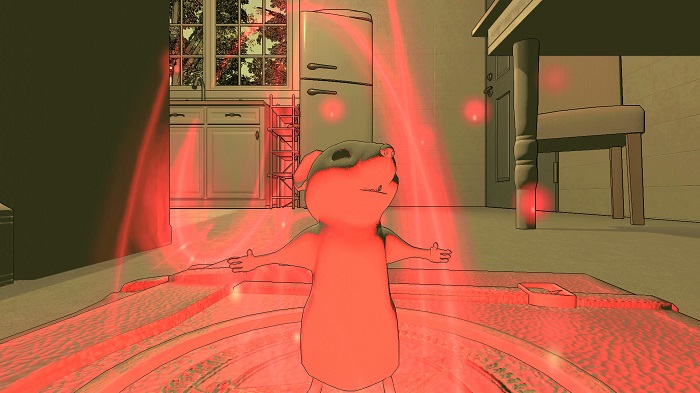 The Christmas Critters would like to welcome their newest addition to the family. Hail Satan!

Quintus and the Absent Truth tried its hand at horror, but I just wasn’t feeling it. Sure Alan’s wife got one good scare on me but that was it. She ended up feeling like a footnote, and the only thing cluing me in that this might’ve been horror-themed was the Satan worship going on. Even then, it felt played down so much that I often felt like it settled too close to the childish side of things. Sure, this is supposed to be a horror-themed bedtime story aesthetic, but for all the emphasis on horror, it never actually seemed all that prevalent.

Next up is the audio, and I’ll admit to seeing some weak points here. The character you’re playing as, Alan, doesn’t quite come with the emotional range expected for what’s needed here. He comes off as a bit flat and without real emotional range. Same goes for his wife, who doesn’t have all that many voice lines but you can also hear that lack of emotional tone. Really, all the voices come across as a bit dense and unwilling to go far enough to sell any lasting emotional impact. Ultimately, it leaves a bit to be desired, and at its best was passable.

As for the music, that’s something that I wish could’ve had just a bit more time spent on it. With Alan being quite an accomplished pianist, I was hoping for the piano to be just a bit more prominent. For what it’s worth, there are times when it goes far down the octaves, giving an almost rumbling feel to the tension, and that’s the kind of thing I was looking for. Other times it just straight up didn’t work, leaving an emptiness that I feel would’ve been better spent with something going on to punctuate scenes. This doesn’t just extend to the piano either. I was told in-game that Alan’s wife was a brilliant violinist, yet her appearances were never marked by anything beyond a couple scare notes. I feel like she should’ve shared some of the tension Alan himself had musically. A real shame, as it could’ve added a lot more to the flat emotional sequences.

At the end of the game, I really felt like there could’ve been a lot more Quintus and the Absent Truth. The acting felt flat, the themes weren’t as fleshed out as they should’ve been, and the only truly scary thing here is how short the whole experience was. I really wanted to see this succeed, as the art style brought some unique potential, but sadly the experience needs a lot more refinement to be as interesting in execution as it was in premise.

Full disclosure: The publisher provided a review copy of Quintus and the Absent Truth.