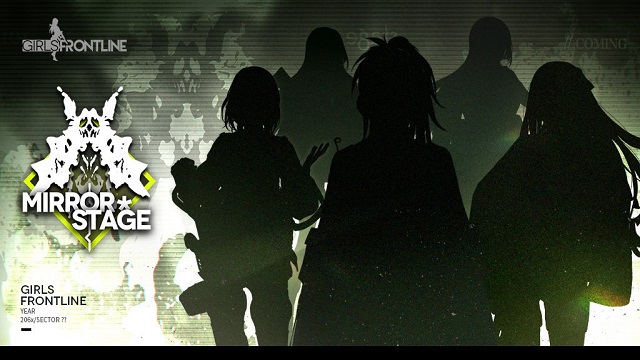 Greetings Commanders! Girls’ Frontline is back online and, with it, comes the latest major event, Mirror Stage! There’s a good amount of goodies to see in the new event, as well as some new T-Dolls amongst other things, so let’s get checking out what all this update brings.

First and foremost, let’s talk about Mirror Stage, the newest campaign to be added to Girls’ Frontline. As with all major campaigns, there’ll be a True Core Mask waiting at the end, ready to net you any  T-Doll from the list below to your team. 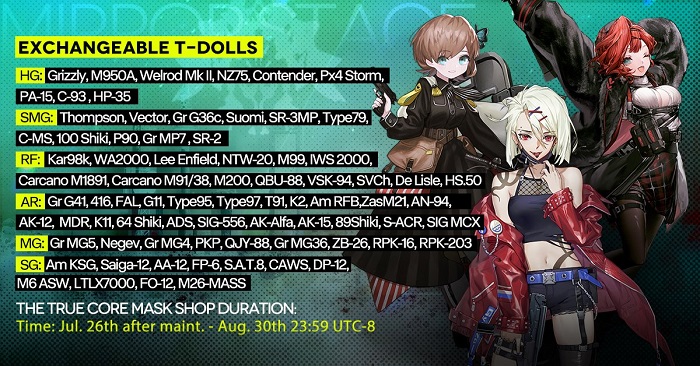 Next, during the length of Mirror Stage’s appearance here, you can get Supply Boxes to exchange for a plethora of goodies, up to and including rare T-Dolls, ultimately netting you the 5-Star SMG T-Doll, VP1915. You can either draw her randomly or she’ll be guaranteed after the 777th box. Seeing that you can net up to 60 a day, you’ll have plenty of time to get her. 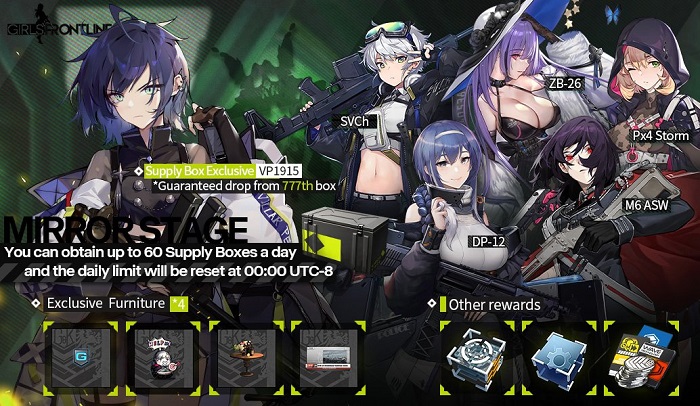 Next up, lets take a look at some of the new T-Dolls showing up for this update! 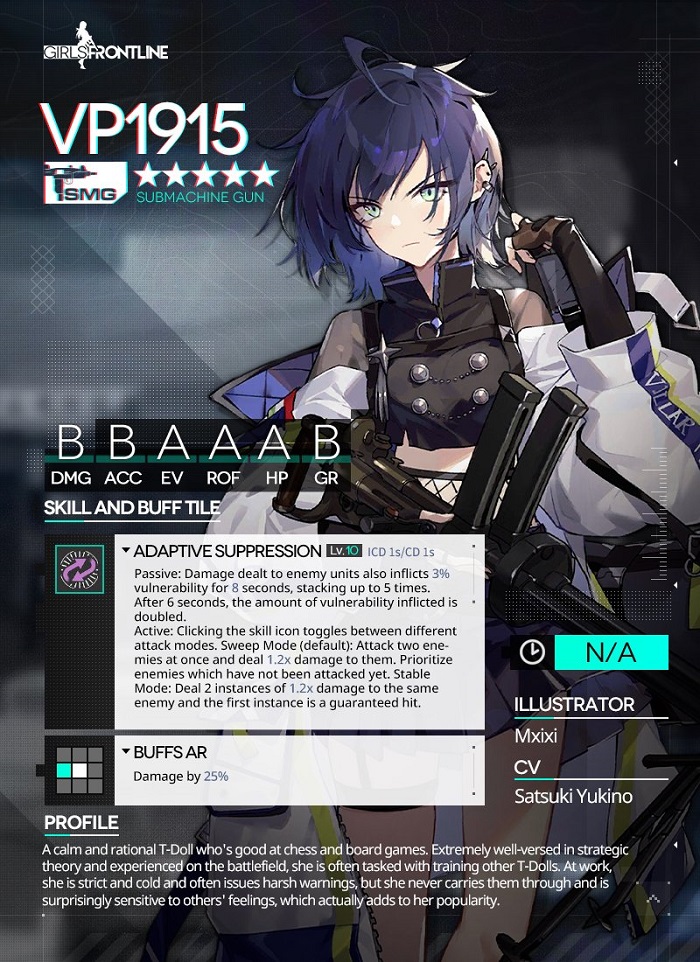 The Pistola Matragliatrice Villar Perosa M1915, aka V1915 was an Italian WW1 fully automatic weapon often regarded to as the first true SMG, as it was a full-auto firearm that used 9mm Glisenti ammunition. To say this thing spits lead like a hose is an understatement, it was more than capable of firing 1,500 rounds a minute, earning it the nickname Pernacchia (Raspberry) by the people using it. Something you might already notice is there’s two magazines attached to this thing and two barrels, something reflected on by the T-Doll holding this monster. The T-Doll’s Active ability toggles her between two modes. Secure mode deals 1.2x damage twice to the same enemy, while Strafing mode, her default, lets her attack 2 enemies for 1.2x damage each while focusing mainly on targets that haven’t been attacked yet. In terms of suppressive fire, this is actually a really neat ability, and could help with keeping up DPS as well as keeping a sense of versatility. While I do wish she had a bit more for her tiles, the 25% buff to ARs is still welcome, and extra tiles can be covered by another SMG. Definitely a worthwhile addition, so pick up your (S)MG raifu today! Seriously, thank god these girls don’t have to reload… 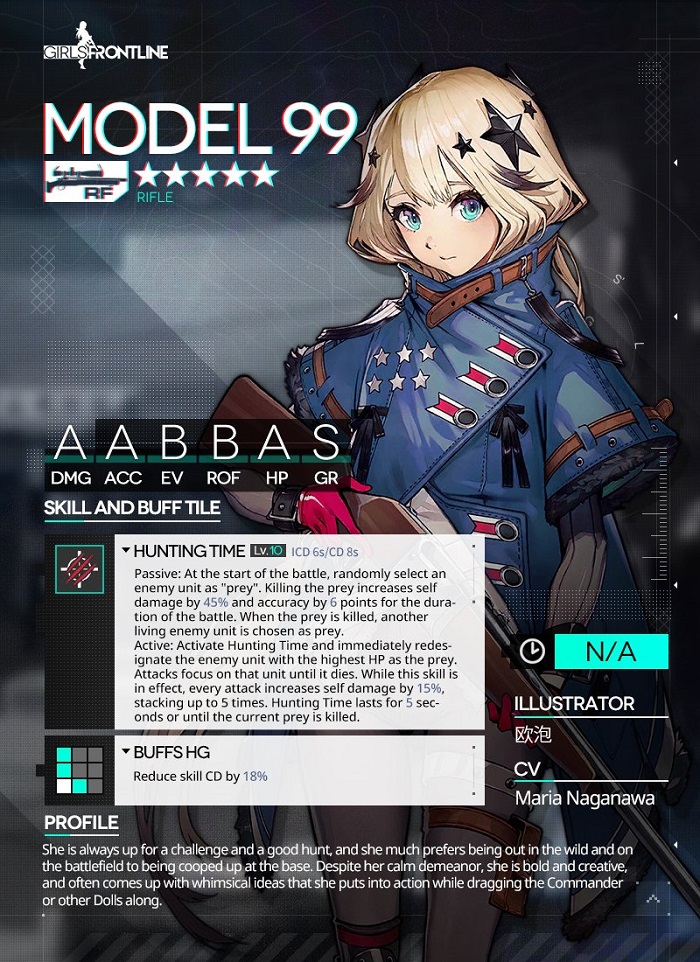 If you’re looking to hunt big game, you can get no classier than the Savage 99 (aka Model 99), known as one of the earlier widely used big game hunting rifles. This gun can chamber a long list of popular calibers, mostly Winchesters, and originally fed via an internal rotary magazine, but later models would have the detachable box magazine. As for the T-Doll herself, she really is as Savage as her name implies. I’ll be honest, her skill made me a bit concerned on the passive that we were gonna wind up with another TAC-50, accidentally targeting stuff that winds up wasting time and power, but luckily she uses her abilities a bit more reasonably. Put simply, when she kills something, she gets +45% self damage and +6 to accuracy. Using her ability lets you target whatever has the highest HP and she shoots it ’til it dies, increasing her damage by 15% every shot that doesn’t kill, stacking up to five layers. Granted, her passive might accidentally go ahead and target the thing you’re saving the active skill for, but assuming she picks off fodder first, she actually could have some damn nice potential as an RF. 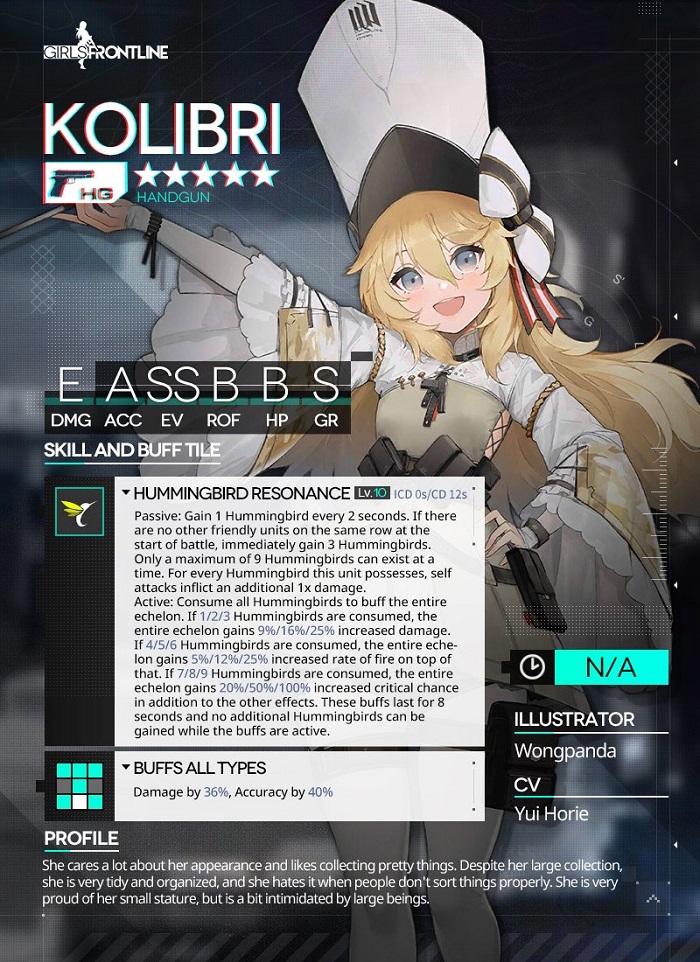 You’re probably wondering where the gun’s at, aren’t ya? It’s hanging off her neck. Yes, this gun is actually that small. Regarded as the world’s smallest centerfire pistol, this little handgun’s name translates from German to Hummingbird, absolutely appropriate given the size of this little fella. Unfortunately 2mm rounds don’t do a whole lot to would-be muggers (maybe moreso if you aim for the head). So with that said, as expected, Kolibri as a T-Doll isn’t much of one for damage, but rather played straight for buffs. Basically, every two seconds, she gets a Hummingbird. Every Hummingbird, in stages of three, contributes to a percentage increase to whatever stage she’s on. So 1-3 Hummingbirds gives 9/16/25% ally damage, 4-6 Hummingbirds increases ally ROF by 5/12/25, and 7-9 Hummingbirds increases ally Critical Rate by 20/50/100%. Did I mention these stack? You get all the previous stages’ buffs as you go on collecting Hummingbirds. She’s got a nice little skill there, and while I’m personally a bit iffy on the time-based part of the gimmick, I can see some creative use for her in certain builds. All else fails, in my own honest opinion though, I’d collect her just because she’s absolutely adorable. Also her hat is awesome.

Moving on to our next pint-sized powerhouse, the Derringer, a 4-Star HG! 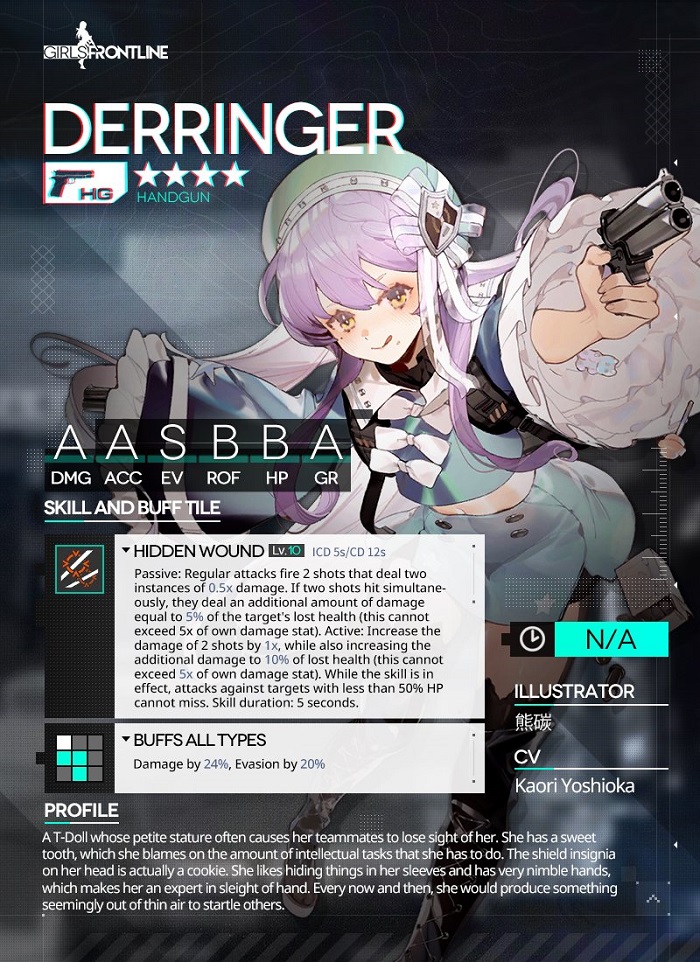 So there’s a lot of different variations to the Derringer, but this one bears most semblance to the Remington Model 95. Chambered in .41 Short, unlike the Kolibri above, getting shot by this thing is actually going to more-than-likely kill you if it gets too close to something important. It might not be the most comfortable thing to shoot, but if you’re in a pinch, Derringer’s got their claim to fame for a reason. So the T-Doll behind this little powerhouse has a semi-interesting skill where she add some extra damage on to her attacks based on how much HP damage she does to her enemies, with her Active skill taking that up a notch. That said, her tiles are absolutely wild and require some finangling to get to work right. So much effort could be used in some circumstances, but I don’t personally feel like the pros outweigh the cons, which is a real shame. She is quite a cutie, so if you’re at least looking for another HG raifu, there’s more than enough reason to add her to the team.

Finally, we have Federov Avtomat, a 4-Star AR! 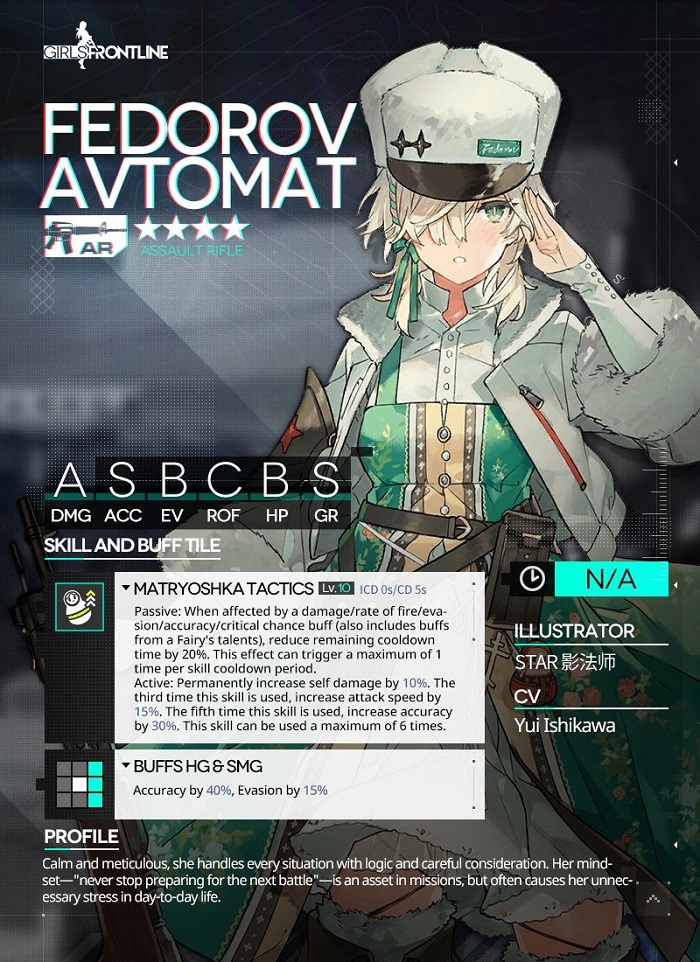 The Fedorov Avtomat, also known as Fedorov’s Automatic Rifle, is a select-fire rifle used in 1916 for the Russians during WW1, and holds the claim of being one of the world’s first operational automatic rifles. During its conceptions, the prototype would use a new rimless 6.5mm cartridge fed via stripper clips before eventually getting its 25-round detachable box magazine you can see the T-Doll using. While the rifle itself bears significance in history, the T-Doll sadly won’t be making it into any T-Doll history books. It’s got decent tiles, with a full column in front of it giving 40% accuracy and 15% evasion, but the skill is way too time-focused, even worse-so than Kolibri. Every time Fedorov’s skill is activated, she permanently increases her damage by 10% on first activation, thir activation giving 15% ROF, and 5th activation gviing 30% accuracy buff. Thing is, even with her passive decreasing her current cooldown by 20% every time she receives a buff, you’re still waiting far too long for all her buffs to compile. Still, if you desire some authentic Russian raifus with a bit of history behind them, you can do no wrong here.

That’s all the new T-Dolls, so let’s take a look at the drops to be expected in this campaign. 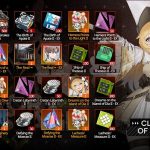 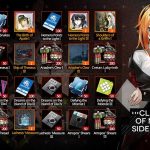 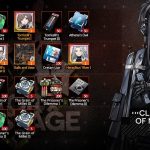 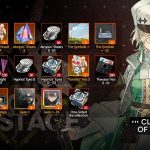 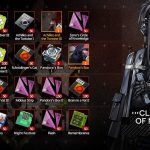 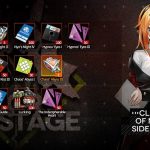 A lot to work for here, but the rewards are a-plenty. The next big thing happening here is that a grand total of four T-Dolls getting their Neural Upgrades! You can see the full stat changes down below. 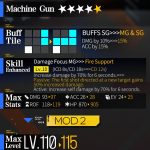 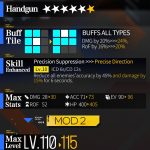 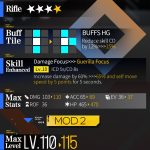 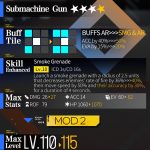 The next thing on the list is some new pools for the Protocol Assimilation, which features an interesting new unit that’s essentially Architect Swimsuit Edition. While I’ve seen images of this floating around, I was wondering when it was going to get the full global release. She comes with a few extra quirks over her base form, making her all the more desirable by those with and without her base form. The other pool we’ll be seeing is Scarecrow making a return. 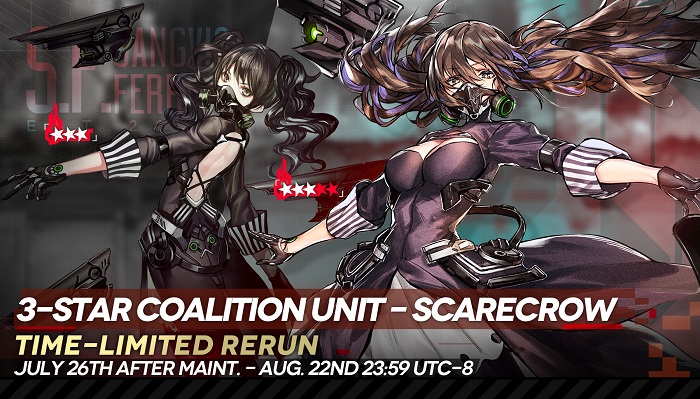 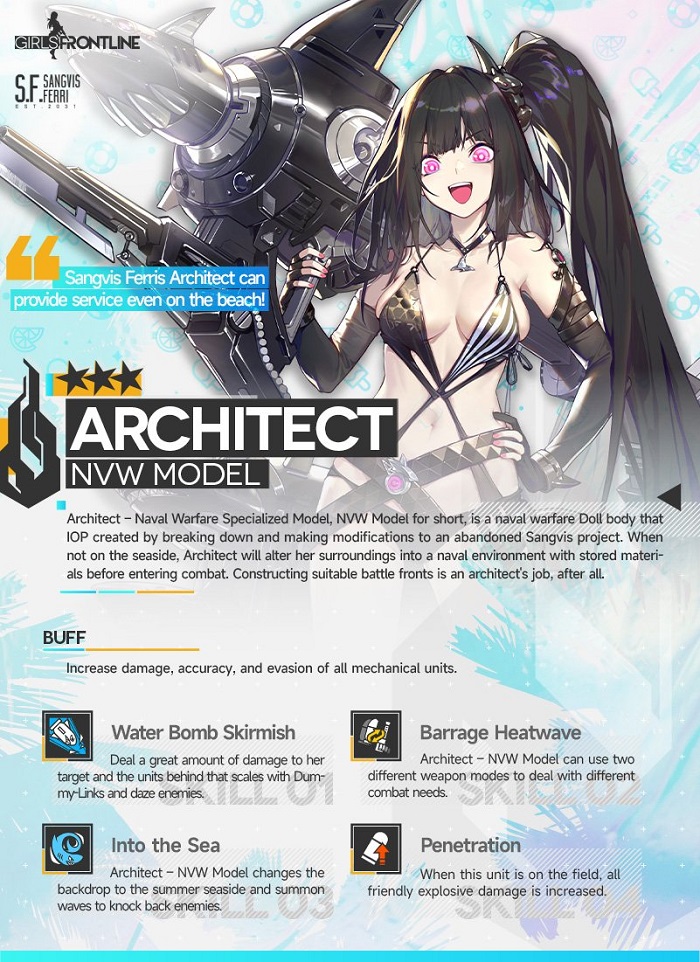 Finally, we have some packages arriving in the store to take a look at.

If you haven’t seen it already, you should check out the PV for Mirror Stage put out on the official Girls’ Frontline channel.

Excited for the big new event? Sound off in the comments below! And as always, stay tuned for more of the latest Girls’ Frontline news and guides. 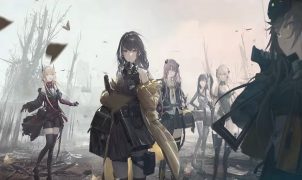 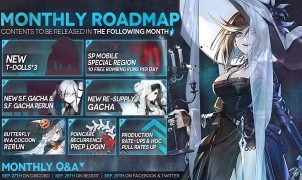 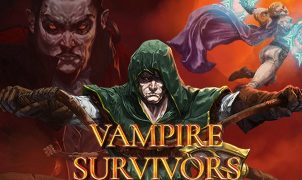 Vampire Survivors Review: Something New It isn’t often that we get to see the birth of a new genre, but that’s what’s happened over the last year, thanks to…