Super UFO Fighter Review: Shwoop There it Is!

I love me a good party game. The kind of game where you can just sit back with some friends and simultaneously get unreasonably frustrated and laugh at the same time. The only problem I really encounter with party games is the difficulty in balancing single player and multiplayer modes. While it’s always more fun to play with friends, sometimes you just want to play by yourself. Thankfully, Super UFO Fighter, from VV-LABO, is one of those games that manages to be engaging for solo and party play.

The Hottest Sport in the Universe 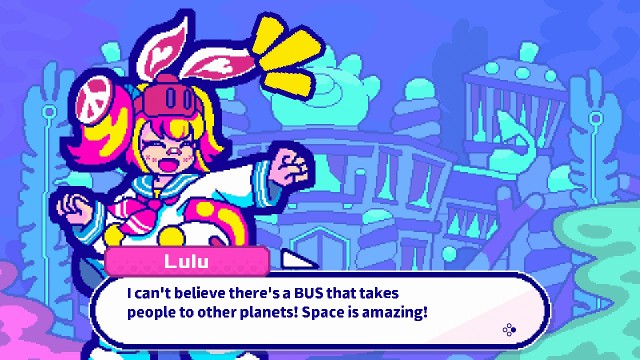 I was pleasantly surprised that Super UFO Fighter had a campaign mode, with a story and everything. Of course, this being a party game, don’t expect some deep, incredible story. Still, what’s there is enjoyably goofy and light-hearted in the best of ways. The titular Super UFO Fighter is the number one sport in the galaxy, with everybody from space princesses to mad scientists taking part. As you battle your way across the galaxy, while playing as several different characters, you’ll find yourself menaced by a dark fighter with bad intentions. And, well, that’s pretty much it for the story in the campaign mode. Like I said, it won’t be winning any awards for writing, but that doesn’t mean it’s bad – far from it. It’s delightfully silly and a welcome respite from some of the deep, dark, heavy narratives of many of the games I tend to play.

Shwoop Your Way to Victory 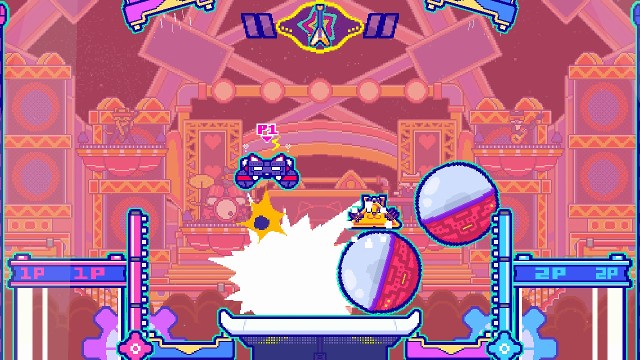 Gameplay is, of course, where Super UFO Fighter shines. Gameplay is 1v1, whether against the computer or another player. Your objective is fairly simple and straightforward: find the target item and drop it into your goal. Each fight is made up of two to three rounds, and a round ends when you manage to get the target item into your goal. The target item is shown in the top middle of the screen, and is hidden within one of the capsules that drop from the sky. Capsules which, by the way, look suspiciously like Pokéballs. But I digress. To break open the capsules, you’ll need to attack them, and each fighter has their own unique attack. While they all shoot downwards, that’s where their similarities end. For example, one fighter shoots a bomb that you can control the direction of, another shoots down a series of music notes, and another shoots shurikens at an angle.

There are three types of capsules to break open: ones that contain regular items, ones that have special items, and one that will hold the target item. Regular items can be grabbed and moved with your “shwoop beam” which is essentially a tractor beam. By hoovering up regular items and dropping them into your goal, you’ll force a wall to rise upwards on your opponent’s side of the field, making it much harder for them to get items (and especially the target item) into their goal.

Breaking open a special capsule will give you an edge against your opponent. Special capsules may be an item, such as a bumper you can place in front of their goal, or a status effect, such as reversing controls. Finally, there’s the target item. Usually significantly larger and heavier than any other item, it’s much harder to get into your goal. Whoever has the target item in their shwoop beam is defenseless against attacks that will leave you stunned, and it’s possible to have the target item stolen from you before you can get it in your goal. 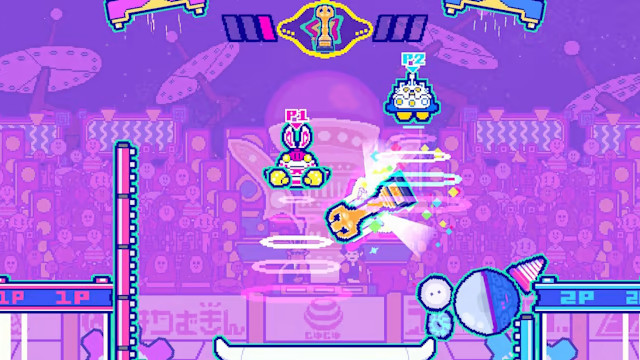 Aesthetically, I literally cannot find a single complaint for Super UFO Fighter. The pixel art is absolutely delightful and charming, and the color palette pops in the best of ways. The music is simple but catchy, and goes perfectly with each stage. The levels are small but well-designed, and have some of their own gimmicks, like gravity reversing or the stage going pitch black save for spotlights sweeping across the screen.

There’s very little to criticize about Super UFO Fighter. It’s a game that’s easy to learn and challenging to master. With campaign mode, a versus mode, and a “hot potato” mode, there’s plenty to keep players entertained. While it may seem simple on the surface, Super UFO Fighter is incredibly entertaining and only gets more challenging the longer you play it. If you’re looking for a new party game to play alone or with a friend, I definitely recommend giving this game a shot. I don’t think you’ll be disappointed.