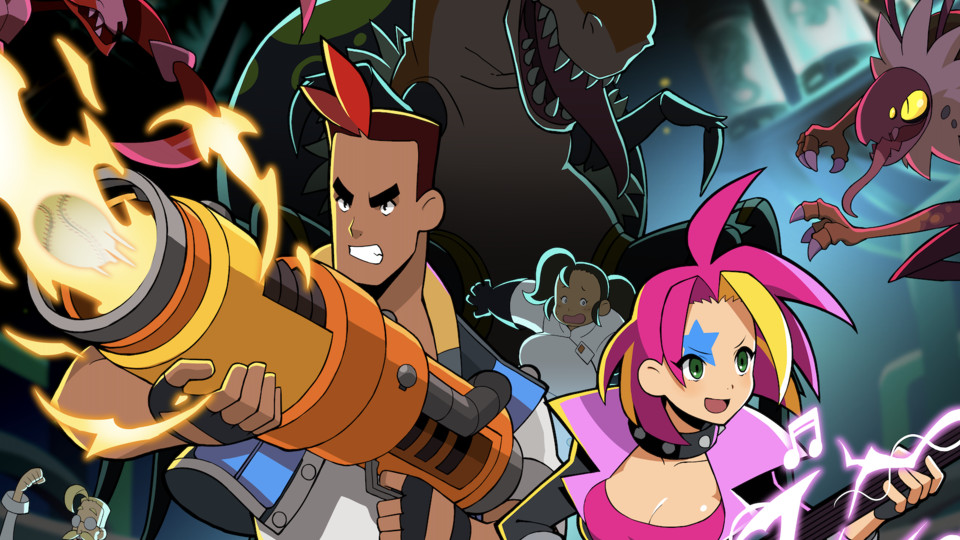 Even though I’ve been a fan of WayForward for a while now, I didn’t think they had another game this insanely creative in them. The only other title in their library which I would begin to compare to Spidersaurs is Cat Girl Without Salad: Amuse-Bouche. Not because they’re the same genre, but because both take bizarre concepts and somehow make them work. That premise here is that the world is on the verge of environmental collapse. Our food supply is at risk, so the enterprising InGest Corp has come up with a solution – genetically modified food! Their product mixes dinosaur DNA with insect genes, creating the titular Spidersaurs. And just like in Jurassic Park, things quickly go wrong, and the critters get loose. 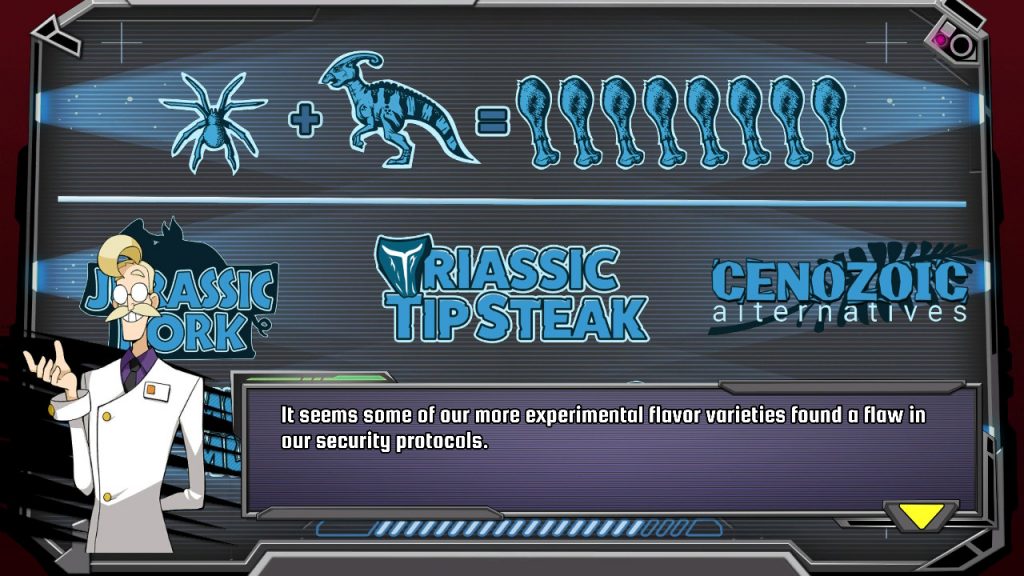 The only heroes capable of stopping them are Adrian and Victoria, who have both consumed enough of the genetically modified InGest Corp food that they’ve started to develop extraordinary abilities. Which makes them the only two that have a chance of stopping this apocalyptic rampaging species. And as this Spidersaurs review will quickly establish, though the game has a few issues, it’s a fantastic adventure overall.

Bad to the Bone 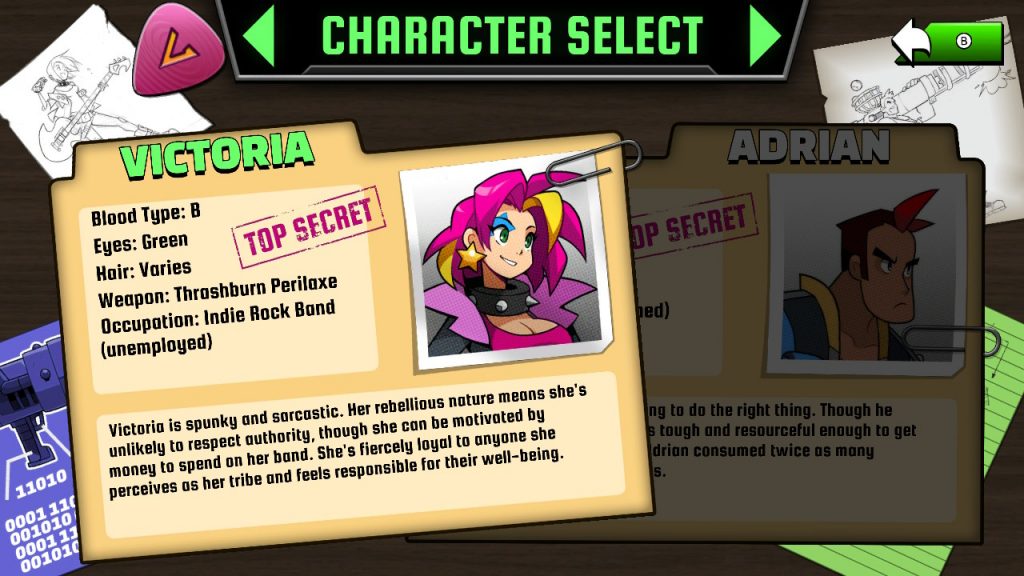 I’ll quickly point out that Spidersaurs is behind the same folks that made Contra 4. While it’s been more than a few years since I last played that game, I do recall it being tough as nails yet surprisingly fun. While Spidersaurs is much more balanced and forgiving than Contra 4, it still has a ton of Contra DNA hiding in its digital cells. You can run and gun with Y, jump with B, hold ZR to aim while standing still, climb railings, etc. If you’ve ever played a Contra game, the way Spidersaurs plays will immediately be familiar. The game even features two distinct playable heroes, weapon pods to pick up new armament, the ability to switch between two equipped active weapons, and epic boss fights. Despite all that, there are still some significant ways this game mixes the classic formula up. 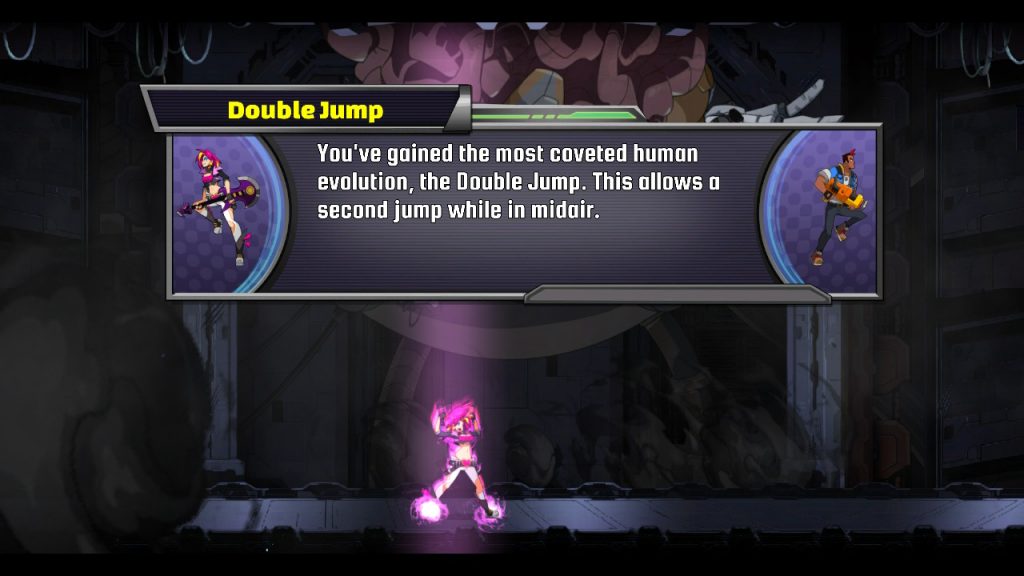 One of the most apparent ways Spidersaurs diverges from Contra is that you gradually pick up new abilities as you progress. Each boss you defeat leaves behind a giant chunk of Spidersaur meat, and after you chomp down, you’ll evolve your hero with a new skill. These range from the ability to climb walls to a double jump and even spitting webbing to zip up vertically in a hurry. Though I very much enjoyed these skills, I had two small problems with them. One is that whenever I get upgrades like this, I associate them with the Metroidvania genre, which Spidersaurs very much is not. It’s pure run and gun, fast and frenetic. The other small issue is that as a result of this feature, the levels ramp up in difficulty exponentially with each new ability acquired. The first couple of levels weren’t that tough, but by the third, I started hitting a brick wall, both because of an increased prevalence of stage hazards and ruthless boss battles. It’s nothing that can’t be surmounted with patience and effort, but it is worth noting. 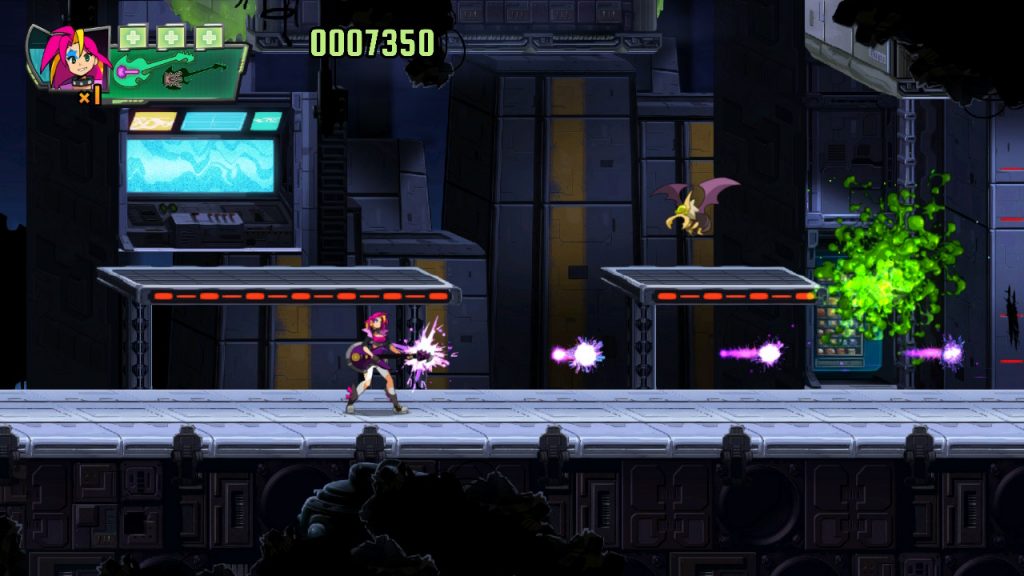 Also relevant is that, while you can take three hits before dying in Spidersaurs, there are some design quirks that make that less helpful than you might expect. One is that, even though you can upgrade weapons by picking up multiple pods of the same type, you’ll lose those upgrades even quicker. If you take damage while your gun is boosted, it’ll power down one level. If you die, whatever weapon you had equipped is gone until you can find another pod. And it’s important to note many of the weapon pods fly by quickly at odd elevations and angles, making them very easy to miss. Another issue is that many of the game’s stage hazards are hidden in all the beauteous details you’ll find in each stage. More than once, I ran headfirst into a giant spiderweb or got hit by a turret I couldn’t see. So you’ll need all your lives and health to get through some of the vicious levels the game has waiting for you.

When Food Bites Back! 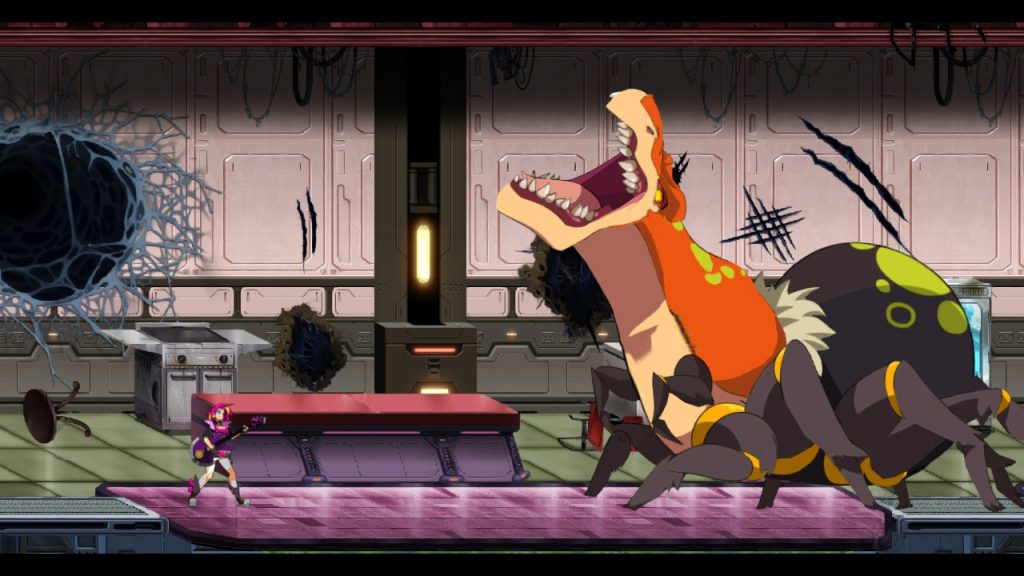 Like any good run and gun, Spidersaurs has epic stages full of platforming culminating in incredible boss battles. Though there’s a lot of Contra DNA in the game, I’d say the bosses are more reminiscent of the Shantae series, while there’s also a couple that remind me of Cuphead and Castlevania bosses. One of my favorite bosses is called the Weaver Siblings. They create a giant homunculus out of twigs and roots that attacks you, and once you damage it enough, they’ll refashion it into dangerous new forms. There are also some pretty great mini-bosses, from flying rhinoceros beetle hybrids to a recurring mini-boss that’s a humanoid, trash-talking roach. None of the bosses is mediocre or forgettable, and some even feature multiple attack phases. I enjoyed them overall, so much so that I was flabbergasted that the game doesn’t include a boss rush.

Pretty On a Genetic Level 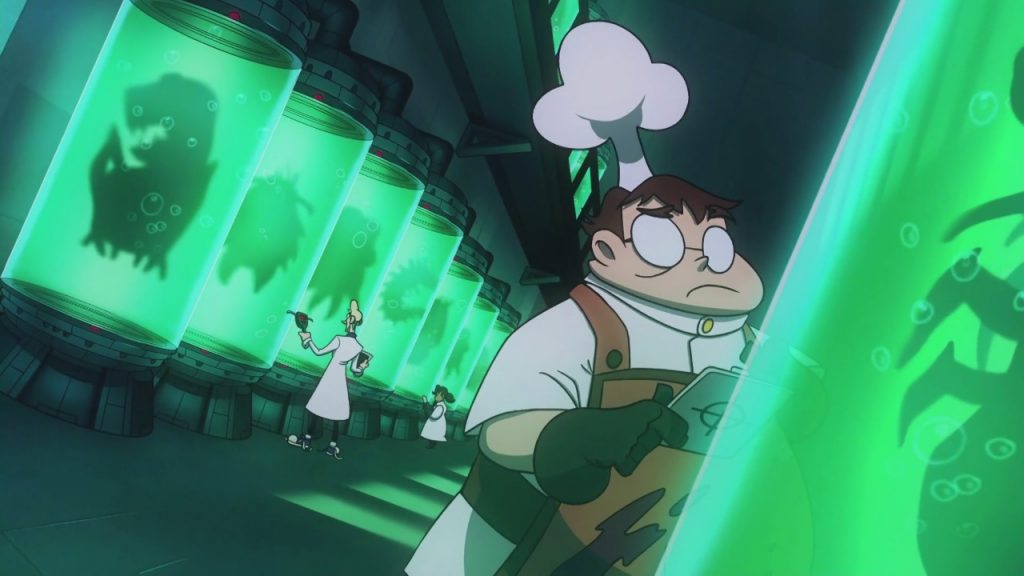 Visually, Spidersaurs represents the best that WayForward is capable of. The game is colorful and full of lush details. It also has a lot of humorous banter and a pair of really quirky heroes. Adrian is a wannabe policeman, while Victoria is a fierce punk rocker. None seems like what you would expect to fight a horde of genetically modified hybrids, but that’s also part of the game’s charm. All the various creatures you face are also really well animated and distinct, from tiny gators that spit bullets at you to terrifying albino creatures that attack from the shadows. A special shout-out goes to the fantastic bosses, who stole the show and made the whole experience that much better. Musically, I enjoyed the game, but I didn’t love it. It’s composed by the legendary Harumi Fujita. While I wouldn’t say the music is terrible by any means, it also wasn’t that memorable, at least for me. That said, I really enjoyed the voice acting for all the characters in the game. Overall, this is another visually stunning WayForward adventure with solid musical design. 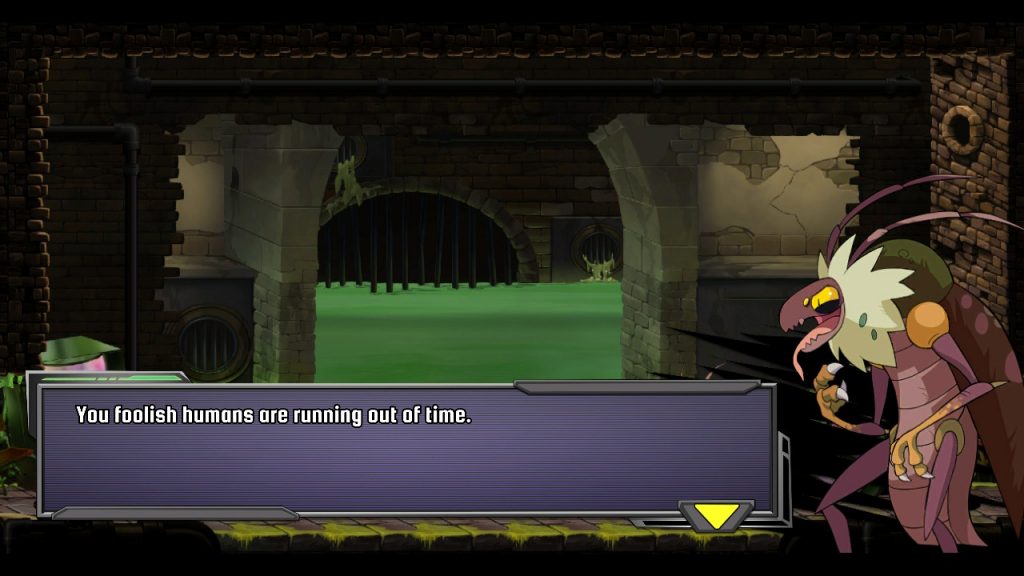 Now, much as I enjoyed my time with the game, there are a few things that held it back. One is that the game apparently has divergent behavior for some enemies. That might not sound bad, but Contra games are always about pattern memorization and quick reflexes. That’s hard to do when you don’t know what the enemies will do once you get to them. As an example, there’s one tentacle enemy. Sometimes it will lob bullets at you; other times, it will sprout up and shake, shedding bullets everywhere. Also frustrating is that if you just stand in one area too long, you’ll either get attacked by the aforementioned albino stalker, or have other foes that keep spawning near you. Basically, I think this is the game’s way of telling you to keep it moving, but it was nevertheless a bit frustrating. 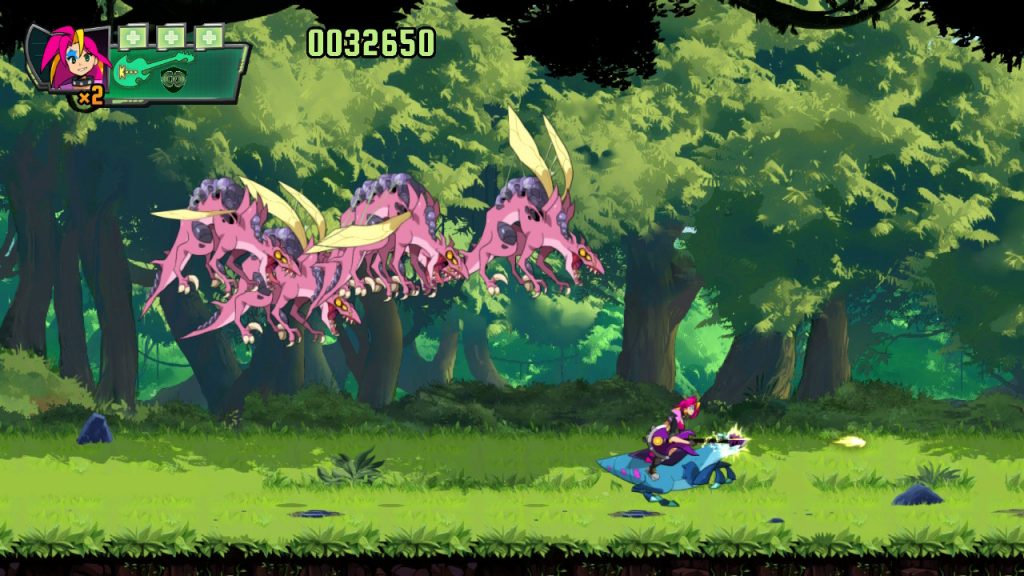 Unfortunately, there was another issue that hurt my experience. I encountered a pretty noticeable glitch in the last level. Everything was fine at first, and I made it to the final boss, only to get walloped. When I tried to start over from the beginning of that last level, suddenly, the entire screen was black. I could hear the foes I knew were there, and could move around, but was totally blind. The only way I was able to get around this was when I realized it only happened when I tried to continue from the final stage. As such, I had to play from the previous area and get to and beat the final level in one sitting. Which isn’t impossible, but it’s a lot harder, and it essentially made the handy mid-level checkpoints useless. That said, WayForward is now aware of this issue, so I’m pretty confident they’ll have it patched sooner than later. 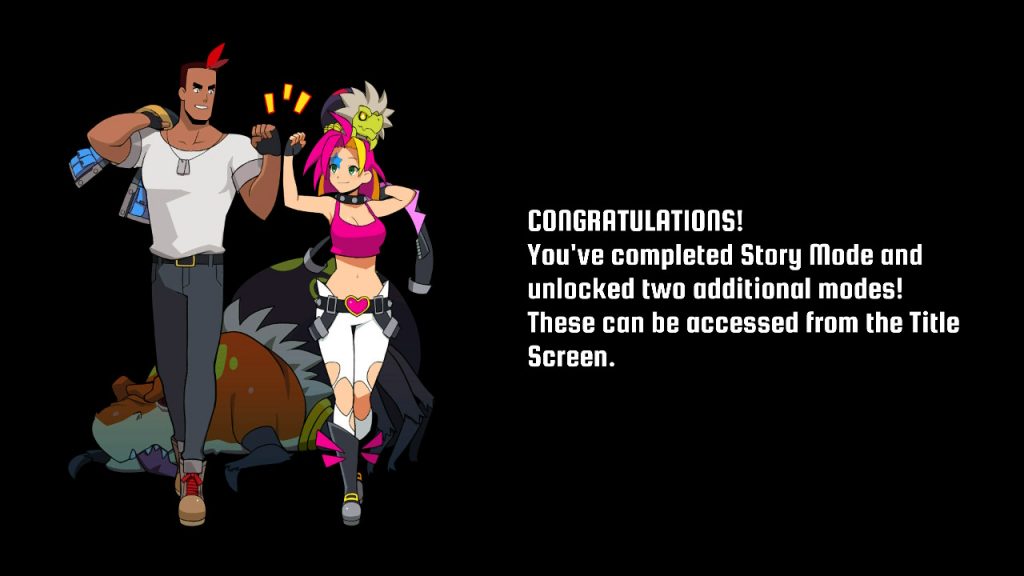 While Spidersaurs is pretty linear and easily beatable in a few short hours, there’s a bit of replay value. For one thing, the game features a two-player mode and three difficulties, if you’re so inclined. More importantly, you’ll unlock a couple of extra modes once you beat the game – Arcade and Speedrun. The former is basically the same as Story mode, just without all the dialogue, and you can’t save your progress and return at a later point. Speedrun gives you all your dino-bilities from the beginning, and has you try and beat the game as fast as possible. Which actually sounds pretty fun. That said, I still lament the lack of a boss rush, and I’d be lying if I didn’t say a part of me would have loved the game to be a full-blown Metroidvania.

Those issues aside, I very much enjoyed my time playing Spidersaurs. Fellow fans of Contra will find something to love here, while fans of WayForward’s brand of uplifting and chaotic fun should also have a good time. This is the best unofficial spiritual successor to the Contra franchise I’ve played in quite a while, and a great example of a classic genre done justice in the modern era. If you’re itching to blast some hideous hybrids to a pulp, this is your game. 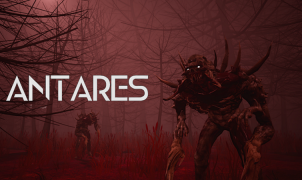