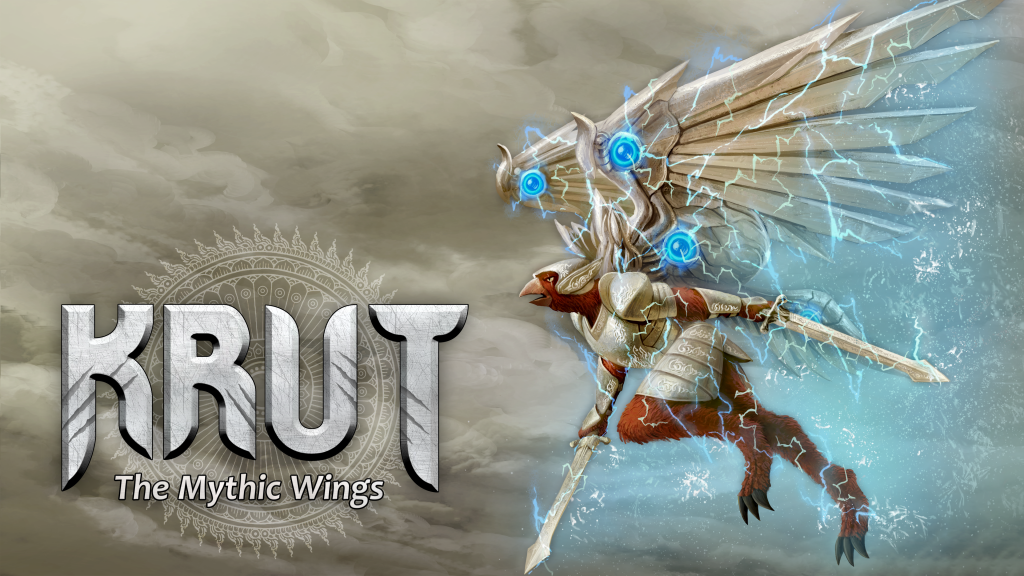 Thailand, its people, and its culture will always have a special place in my heart having spent some time backpacking around the breathtakingly beautiful country some years ago. Krut: The Mythic Wings, an action platformer developed by Thai studio Pixel Perfex, immediately spoke to me with its Thai setting and focus on Thai mythology. Unfortunately, despite its intriguing setting and premise, Krut: The Mythic Wings never quite overcomes its tedious gameplay loops and basic combat that never truly gets out of first gear. 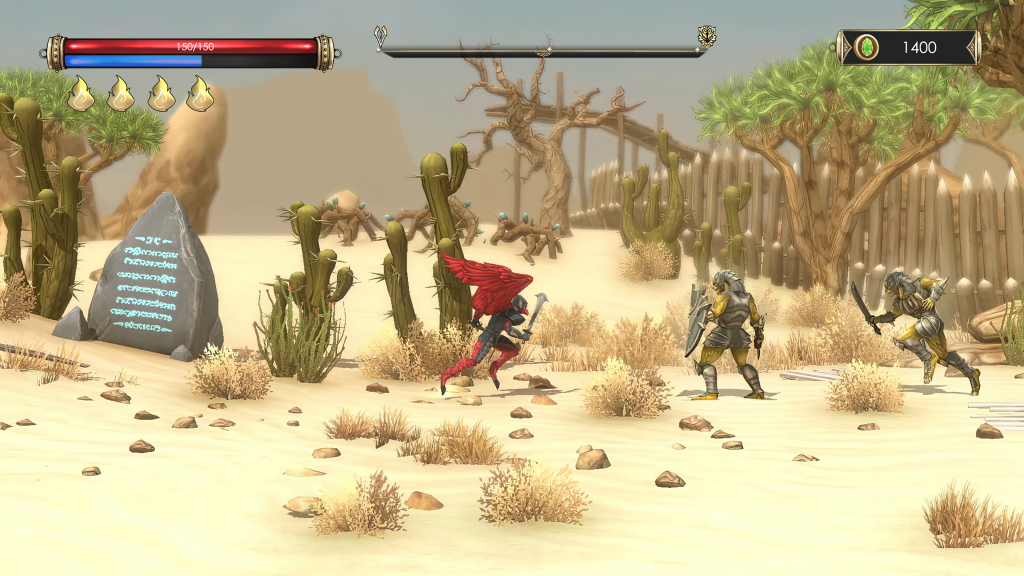 Krut largely follows the story of a 2018 animated Thai movie, which I personally had not heard of going into this review. Players take control of  Vera, a warrior from the city of Krut, and a member of the Garuda race whose homeland of Ayothaya has been invaded and is now controlled by Zulla. Zulla is a powerful overlord with an entire army at his back, and in order to overthrow Zulla and claim back his homeland, Vera must embark on a journey across the island of Himmaphan in order to seek out various elemental spirits that will give Vera the strength needed to win this battle.

Whilst it’s no doubt a familiar set-up, Krut is elevated by its fresh setting and reliance on Thai mythology. I struggle to think of many games released in the West that have tapped into source material such as that which Krut delves into. And for the first while at least, Krut feels like a really fresh take on the action-platformer genre. 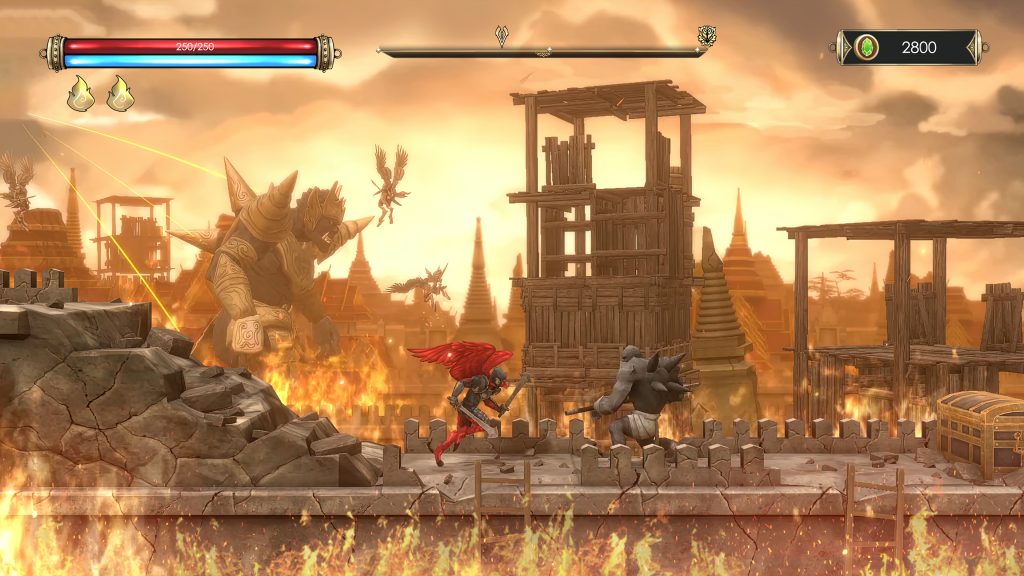 Unfortunately, however, the setting and narrative setup is really the only element of Krut that is easy to heap any proper amount of praise on, and even it isn’t strong enough to ultimately save the 5-7 hours that follows.

In terms of gameplay, Krut’s set-up is very simple. In his quest to obtain the elemental powers, Vera must traverse six deadly levels, each complete with a mini-boss at the midway point, followed by a final confrontation with the big bad harboring the sought-after power within each level. Every level sees you hacking down foes and engaging with a bit of platforming, with both the combat and traversal challenges you face increasing in complexity and difficulty as the levels progress.

It’s a simple gameplay loop, that, unfortunately, wears thin quite quickly due to how frustrating Krut is to play at times. Taking the combat firstly, whilst it initially feels serviceable, the cracks begin to show once you’ve spent a while with it and realize that it will never evolve beyond the simple light and heavy attacks, and the special move that you are granted access to in the tutorial. This lack of variety in the move set really begins to frustrate as you move onto harder stages, where enemy variety and their move sets increase in complexity in a way that Vera’s own abilities never truly scale with. Diving airborne enemies, projectile spewing plants, and other hideous monstrosities soon start to bombard you and it becomes a real struggle to actually make any progress, even on the lower difficulties, due to how limited Vera feels in combat. That’s not to say there is no progression whatsoever; there is an upgrade tree, but how it’s implemented just adds to the tedium Krut descends into.

See, as you slay monsters, you’ll gradually accumulate a currency that can be spent at the start of a level and again at the mid-way checkpoint as well as at the final checkpoint before a boss encounter. The problem with this? The same currency that you use to purchase the upgrades is also used to unlock the checkpoints at which you purchase those additional buffs. What this leads to is an awkward balance where it’s quite often possible to reach a checkpoint and have little in the way of currency left for upgrades. And, adding further to the tedium, is the fact that if you die three times in a level, you’re right back to the start, losing your checkpoints, meaning you have to purchase them all over again. 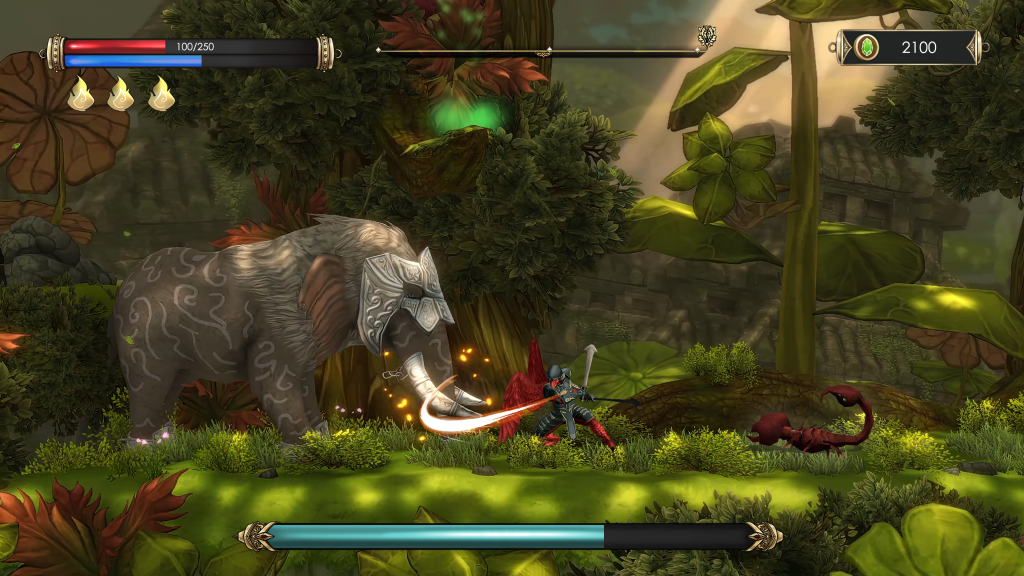 It’s a perfect storm of systems that I’m truly sad to say makes Krut a largely unpleasant gameplay experience. Combat is so limited and the enemies so spongey, that you’re left with no choice but to grind the same level over and over to get enough currency to purchase even the cheapest of upgrades to things like health and damage. This loop then needs to be completed repeatedly within each level until you ultimately become strong enough to beat the boss at the end. It took me 90 minutes of constant grinding in the first level before I had upgraded Vera to the point where he could even scratch the end boss. Even though I’m someone who is not averse to grinding in games, when you’re dealing with combat that’s as one-dimensional as Krut’s, the constant grinding feels like overkill.

When you aren’t engaging with enemies in Krut, chances are you’ll be platforming. Much like the combat, it feels serviceable in the opening level with the obstacles in your way proving easy to traverse. Progress further, however, and you’ll find yourself asked to land inch-perfect jumps that Vera as a playable character simply lacks the precision or level of control to make reliably. Countless times I’d plummet to the watery depths or acid pools Vera frequently faced, largely due to the stiff and awkward movement. Again, I don’t mind a challenge, but when you have issues like these baked into a gameplay loop that revolves around frustrating amounts of repetition, the platforming simply becomes another element of Krut that makes it difficult to recommend. 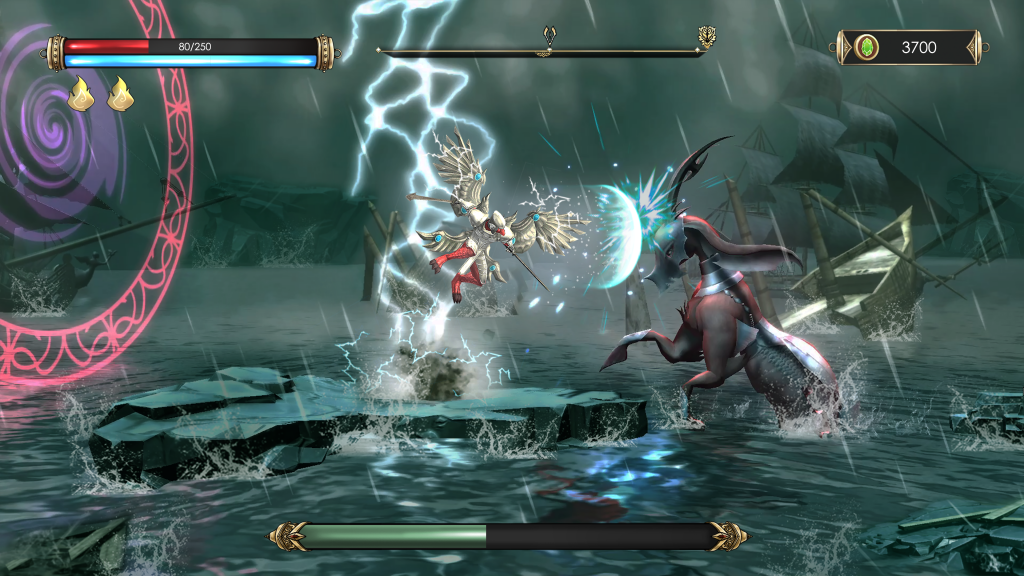 Presentation-wise, Krut fares much better. Levels are nicely varied, with the action being set against varied backdrops. Vera’s adventure takes him across numerous biomes, from lush jungles, idyllic beaches, and temple ruins to stormy seas. Enemies also look decent, with a nice variety of foes to take down that lean heavily into the Thai mythology that props up Krut’s narrative. This is especially true for the boss battles, with these encounters sporting some truly impressive enemy designs along with varied mechanics that often span huge portions of the screen. These boss fights are easily the highlight of Krut, and it was in these moments that it almost became possible to forgive Krut for its other missteps.

The audio also does a decent job. Sound effects during combat are crisp and punchy, helping to convey a sense of weight, whilst the soundtrack succeeds at increasing in intensity at just the right times. There is one criticism I could level towards the soundtrack in that it doesn’t seem to fit thematically with the world of Krut and can, at times, come off like generic action game music that could effortlessly slip into any number of titles. It’s not a dealbreaker, but when the developers clearly have so much love for the source material, it’s a shame to see that the soundtrack doesn’t quite fit.

I truly wanted to love Krut: The Mythic Wings, but ultimately, it’s a title that is extremely difficult to recommend. With its bare-bones combat, imprecise platforming, and an over-reliance on grinding, it completely squanders the potential of its narrative and setting. Whilst there is some fun to be had with the boss fights, the fleeting moments of joy provided by these encounters are completely overshadowed by what a drag the rest of the experience is.