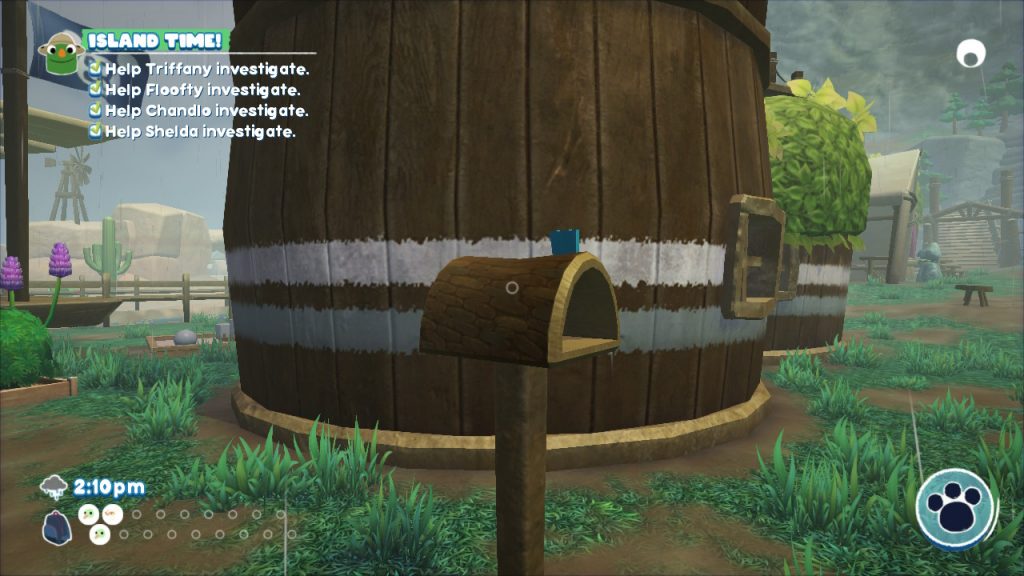 “If you’ve played Bugsnax before but have yet to enjoy the free BIGSnax DLC, there’s no better time than now to revisit Snaktooth Island and discover its bugsnax; if you haven’t played at all, then this is your sign to pick up this surprisingly deep (and dark) experience.”

Bugsnax is a sweet yet sinister creature collection game with adventure and puzzle elements that’ll have you craving more calories than you can count. Take on the role of a “mediocre journalist” who must rebuild a small, struggling society through the power of friendship… and bugsnax, of course! The original release had plenty of quests and sidequests to keep players occupied, but the BIGSnax DLC introduces more content than players can shake a snaktrap at — including an entirely new island, access to a super secret area, and even more bugsnax to catch and catalog.

In addition to all that aforementioned fun stuff, there are also over 100 new side-sidequests to complete. Arriving by post in your brand new house, these 110 mail missions are technically optional, but some are needed to complete for at least one achievement so it’s good to read and respond to your letters every once in awhile. Not sure where to begin? Never fear — we’ve finished every last mail mission and are here to help other mediocre journalists do the same. 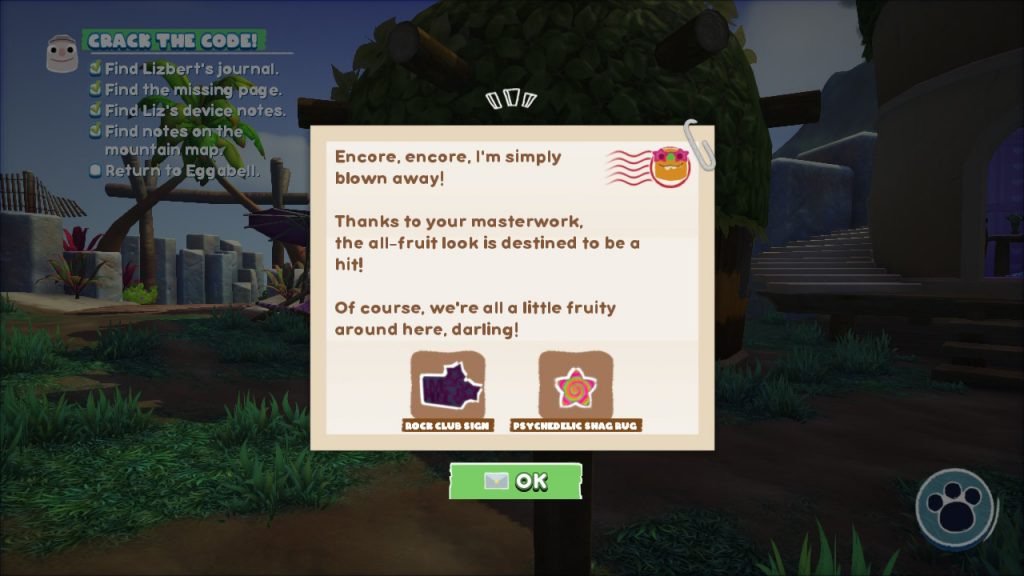 In order to get mail missions, you’ll first need to be able to get mail. To do this, just keep powering through quests until Filbo decides to gift you your own house, complete with a mailbox of your own. He’ll mention that this is perhaps the best way for the residents of Snaxburg to get in contact with you — much like how they used to communicate with Lizbert — and will send requests from time to time instead of waiting to hopefully catch a glimpse of you between bugsnax escapades. Once obtained, these requests can be found within your journal under the house icon, and fulfilling them yields furniture, wallpaper, roofing, lighting, and other decoration items for your house.

There are 110 total mail missions in Bugsnax, and while completing all of them is less of a necessity and more for bragging rights, there is at least one achievement that will require the prizes gifted from them (Live, Laugh, Hut). Some are pretty self-explanatory, others are a bit tricky, and others still are literally invisible; however, all are relatively straightforward after players have become comfortable with gameplay.

Without further ado, here is the 110 Mail Missions Bugsnax guide (in alphabetical order): 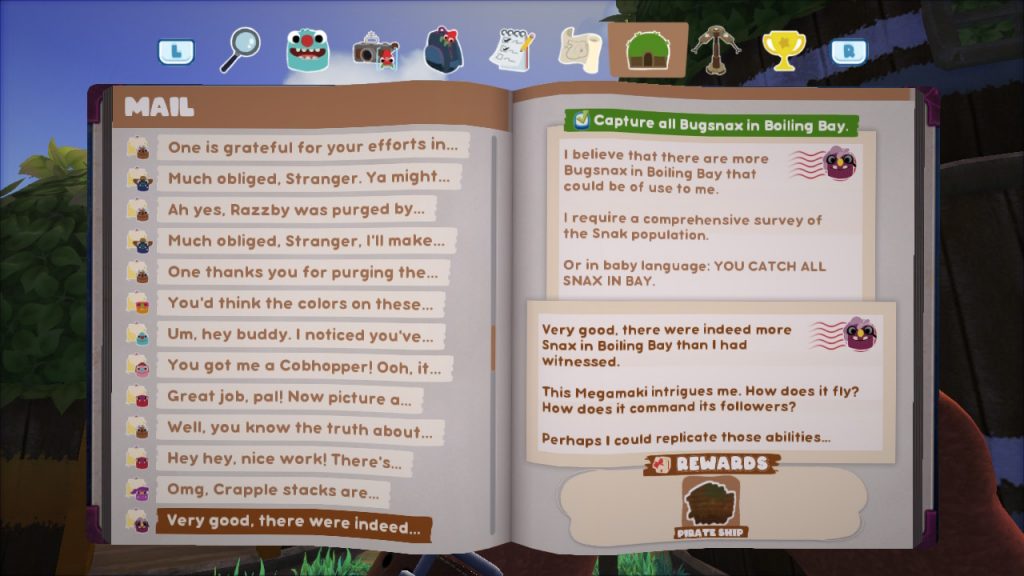 Capture all Bugsnax in Boiling Bay

Capture all Bugsnax in Broken Tooth

Capture all Bugsnax in Flavor Falls

Capture all Bugsnax in Frosted Peak

Capture all Bugsnax in Garden Grove

Capture all Bugsnax in Scorched Gorge

Capture all Bugsnax in Simmering Springs

Capture all Bugsnax in Sizzlin’ Sands

Capture all Bugsnax in Sugarpine Woods 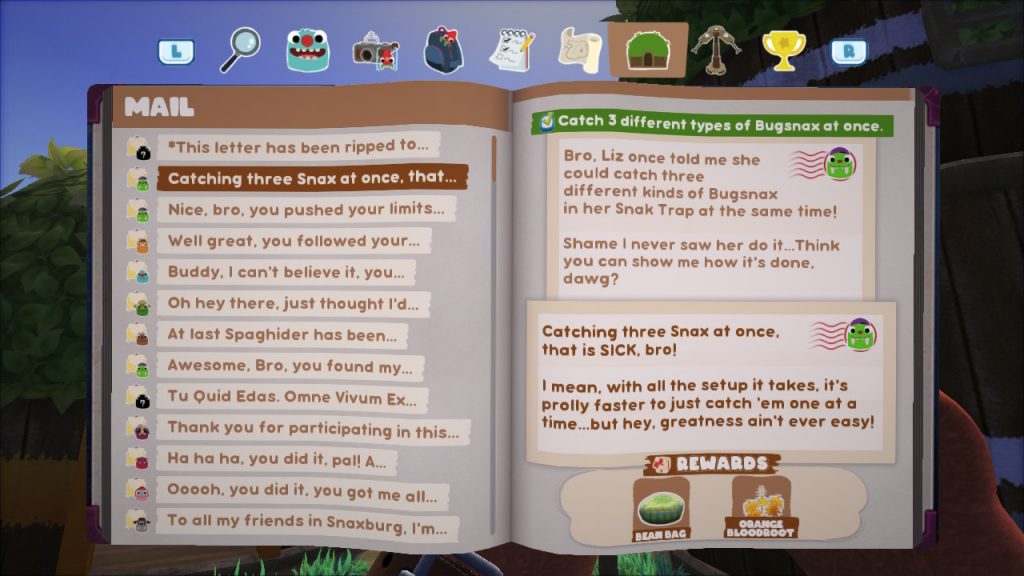 Catch 10 bugsnax in under 90 seconds

Catch 3 different types of Bugsnax at once

Catch 5 different bugsnax in under 60 seconds

Catch 5 Snakpods in under 30 seconds

Catch Cactriffy out and about (Secret Quest) 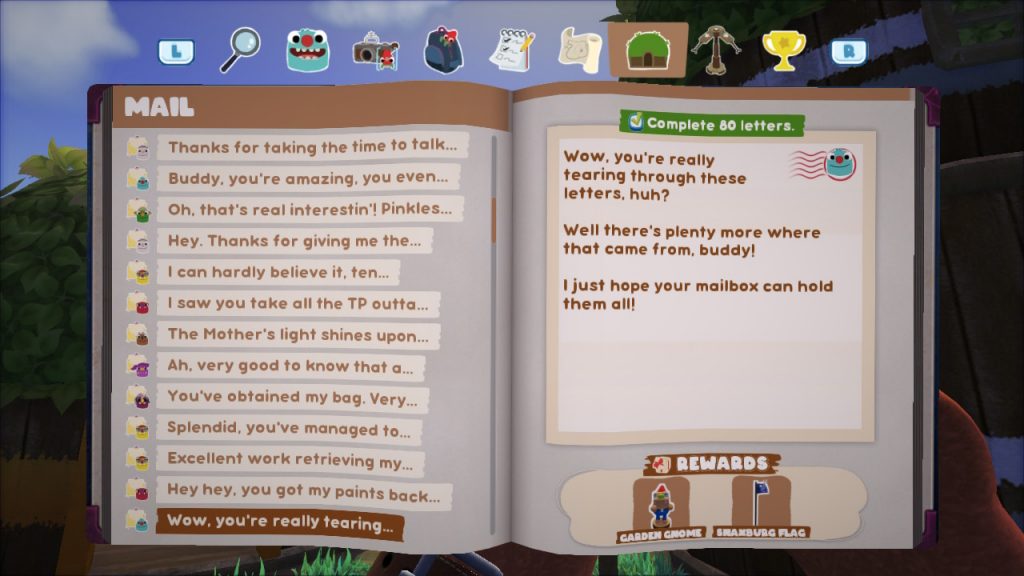 Complete all sidequests for Beffica

Complete all sidequests for Chandlo

Complete all sidequests for Cromdo

Complete all sidequests for Floofty

Complete all sidequests for Gramble

Complete all sidequests for Shelda

Complete all sidequests for Snorpy

Complete all sidequests for Triffany

Complete all sidequests for Wambus

Complete all sidequests for Wiggle

Complete the second interview with Eggabell 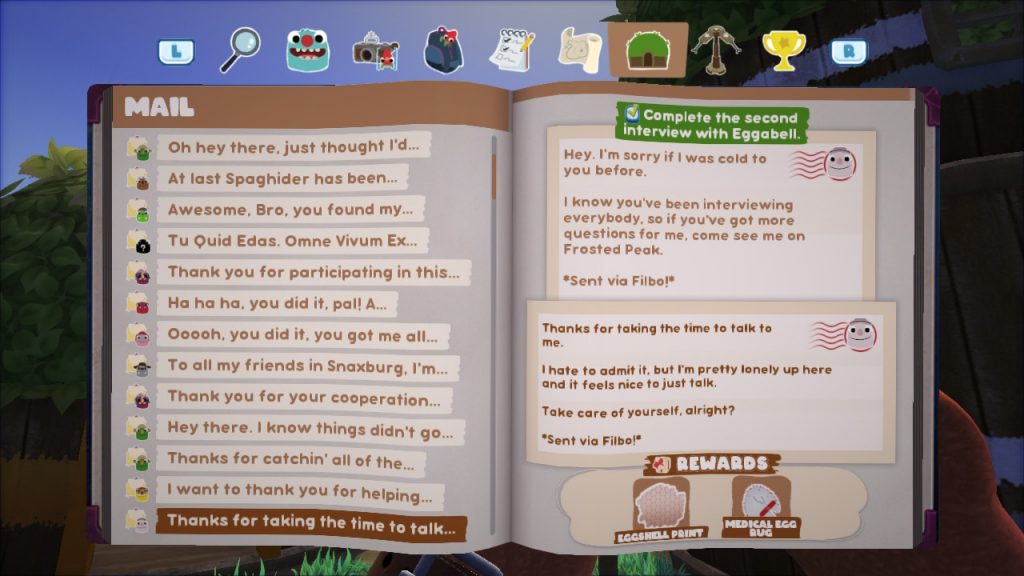 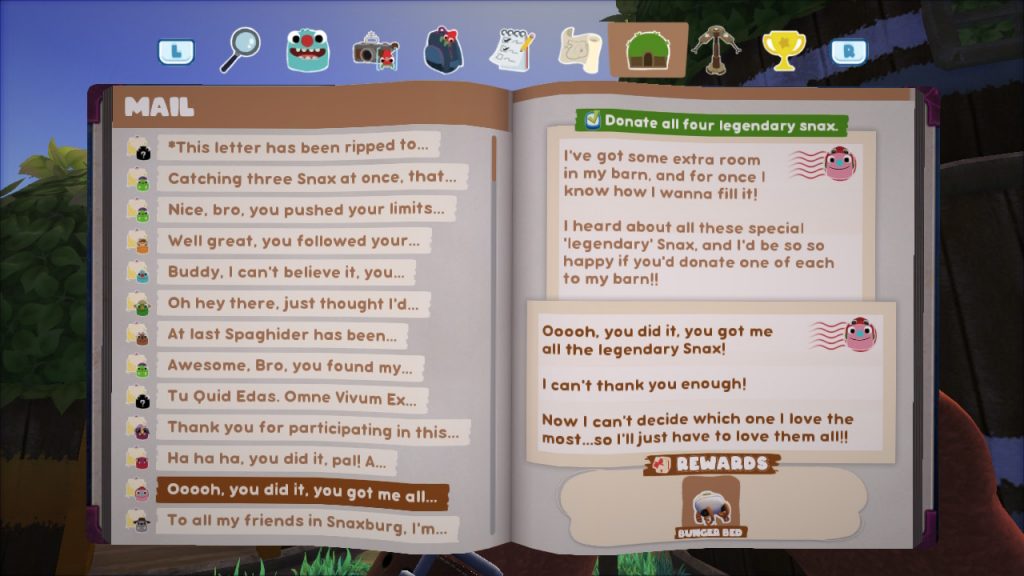 Fall from the uppermost levels of Frosted Peak to the bottom

Feed an Instabug to the mystery grumpus (Beffica) 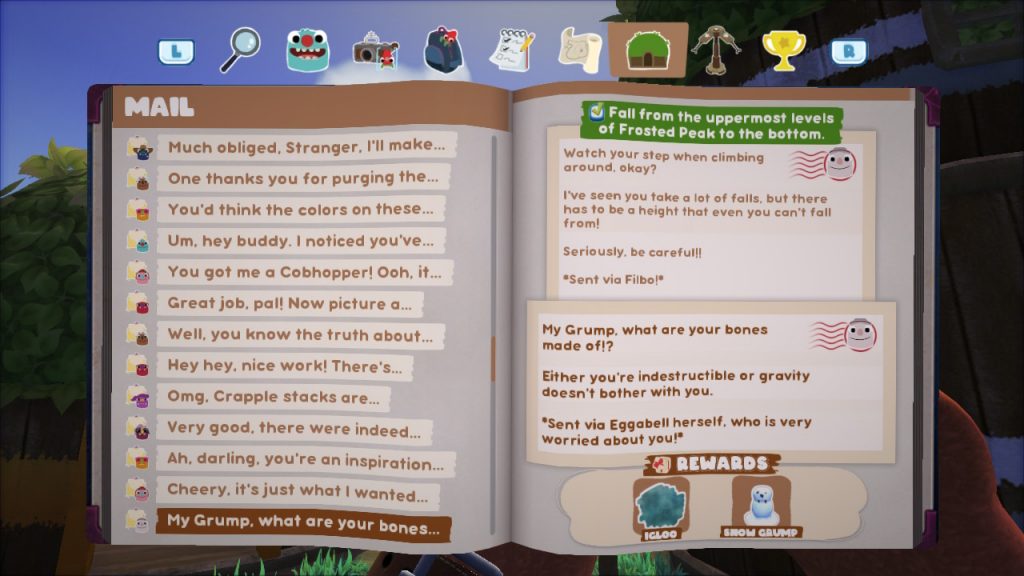 Find a lost item for Beffica

Find a lost item for Chandlo

Find a lost item for Cromdo

Find a lost item for Filbo

Find a lost item for Floofty

Find a lost item for Shelda

Find a lost item for Snorpy

Find a lost item for Triffany

Find a lost item for Wambus

Find a lost item for Wiggle 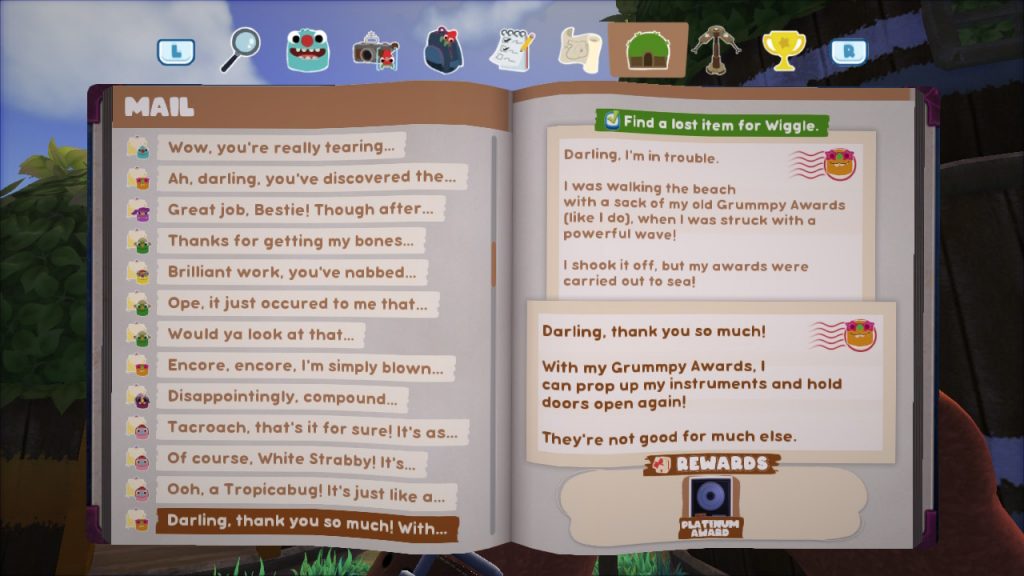 Find all the sauces

Get knocked out of bounds by a bugsnak

Investigate the intrusion at Snaxburg

Listen to all of the secret tapes in the Triplicate Space

Pick up all of Cromdo’s discarded posters 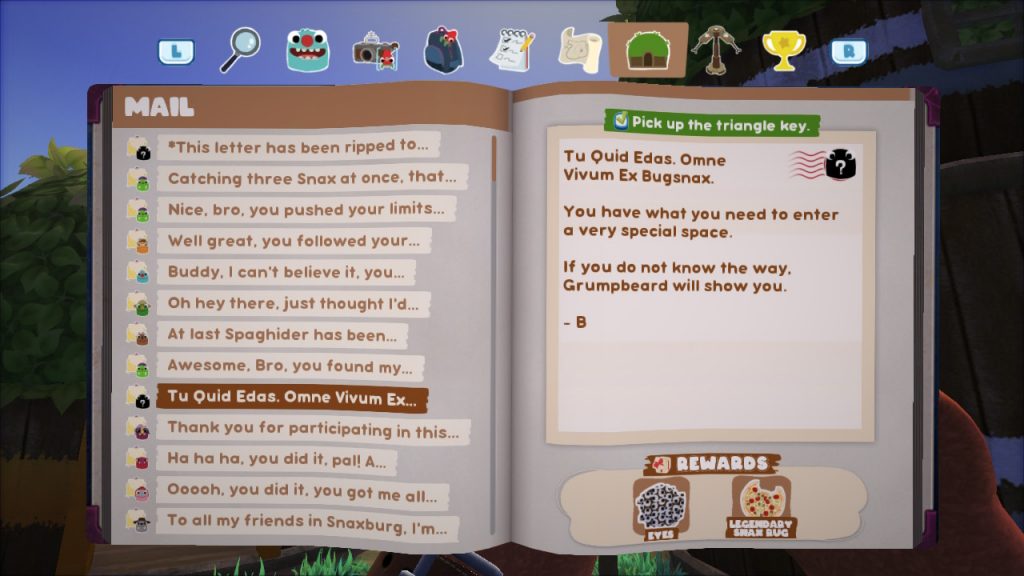 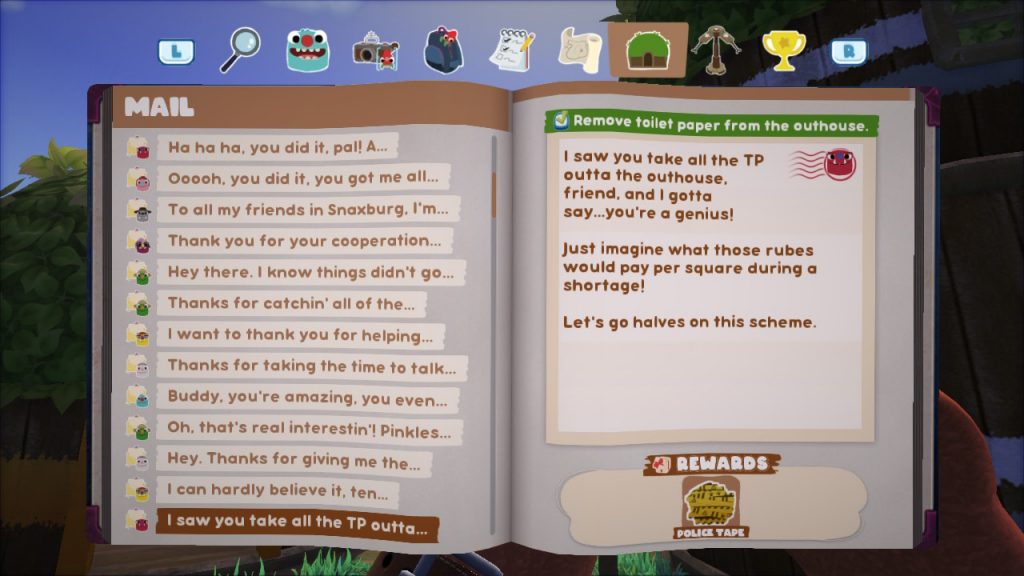 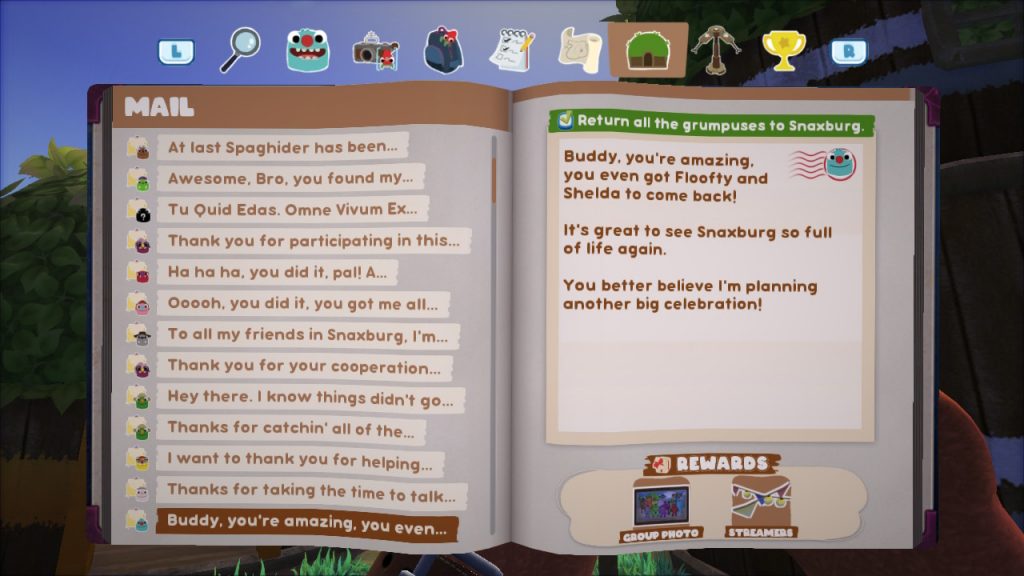 Scan a Crapple carrying another Crapple

Scan a Grapesquito sucking a Noodler

Scan a Hunnabee with a basketball stuck to it

Scan a Shy Weenyworm with ketchup on it 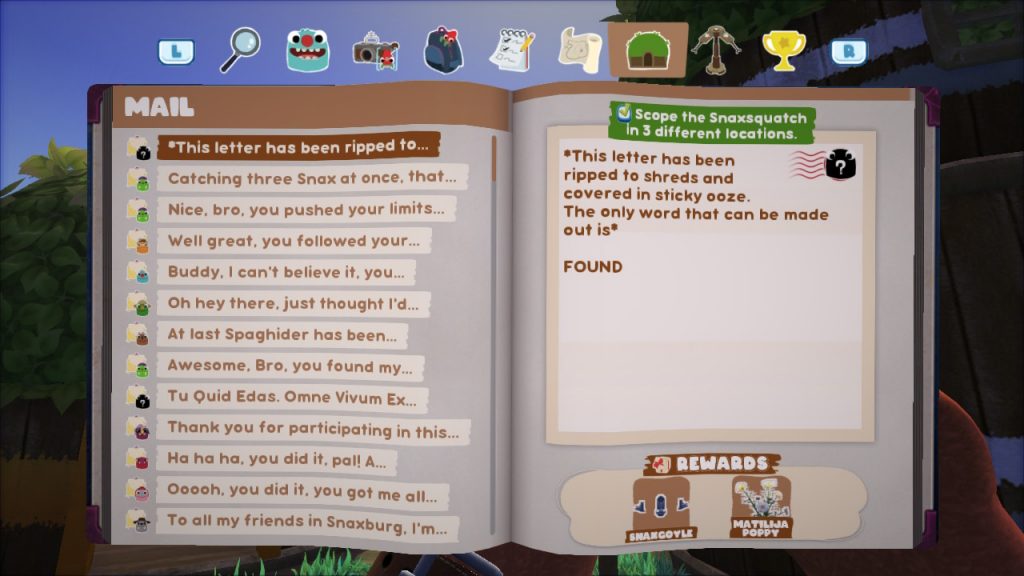 Stay on fire continuously for over 30 seconds 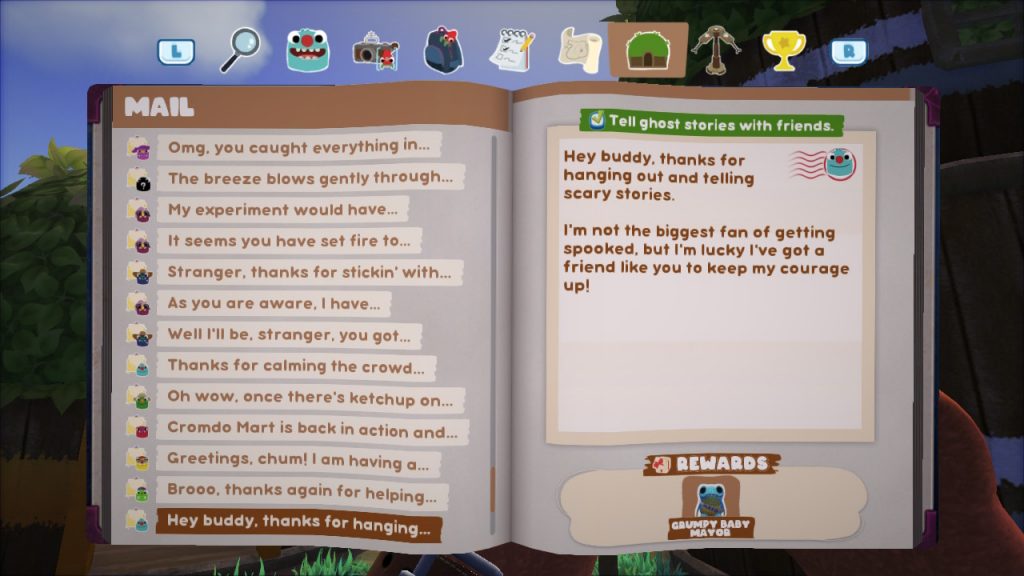 Transform a grumpus to show all 4 Peelbug variants

Transform a grumpus to show all 4 Sodie variants

Watch the “Founding of Snaxburg” tape 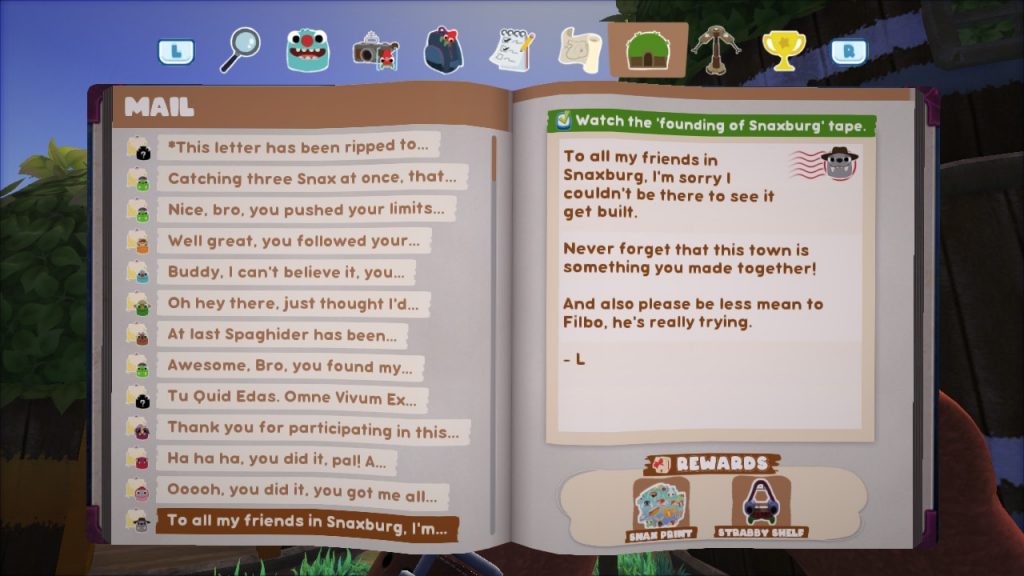 And there you have it! If you follow this guide in its entirety, you should have completed all 110 mail missions in Bugsnax. Snaktastic!