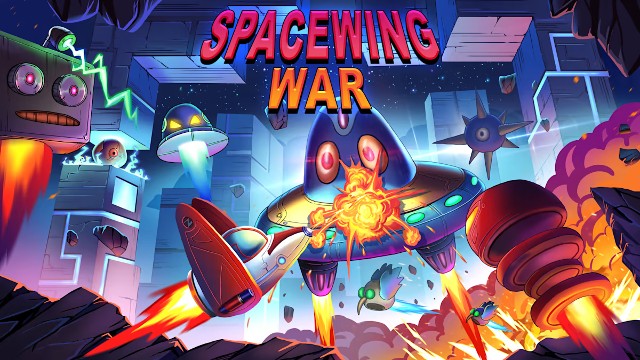 To my knowledge, there weren’t many shmups on the Game Boy and Game Boy Color. The standout titles are probably R-Type DX and Project S-11. Aside from those two, the shmup library mostly consisted of arcade ports. Perhaps designers couldn’t get enough out of the systems’ limited hardware. Spacewing War, though, looks and feels, for better and worse, like a shmup from the 90s.

More specifically, Spacewing War feels like something I would have played on the Super Game Boy, an SNES peripheral my father specifically bought to play Link’s Awakening on the TV. Much like the Super Game Boy, Spacewing War has multiple color palettes that you can switch between at any time. Another similarity is that while some of those color palettes are neat, many of them are abrasive. I opted for black and white or palette 32, both of which you’ll see in the screenshots.

The Pea Shooter Is Fine 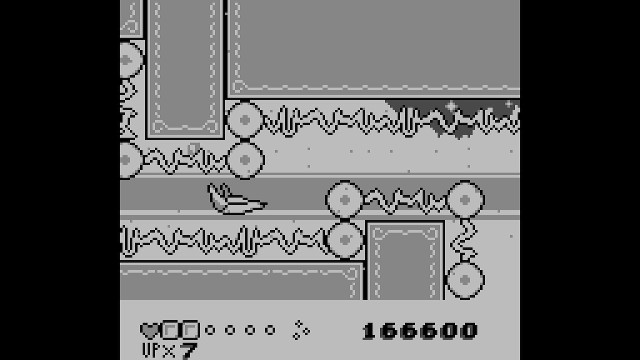 Spacewing War’s gameplay is standard shmup fare. You’ve got four different shot types that you can switch between at any time: a standard single shot that fires in a straight line, arcing boomerangs that can be used defensively, a quick spread shot that also fires backward, and slow but powerful bombs. These are the only weapons you get, and they never change, except for a brief moment near the end of the game in which you’re basically unstoppable. There are two temporary upgrades you can find hidden throughout the levels: a shield that breaks after taking a few hits and a power upgrade for increased damage…which you lose if you get hit.

The standard shot works well if you’ve got the room. The boomerangs are interesting but slow, so I didn’t use them much. The quick shot works well in crowds, and you’ll need it as you get further into the game. Bombs are for bosses. A quick note on that: you can hurt yourself with them, too, so there’s a little bit of risk and reward at play. Part of what is missing here, though, is that feeling of getting powered up into an absolute beast. Ridiculous, overpowered weapons are a genre mainstay that just isn’t present here.

That said, I didn’t switch weapons that often. I played and beat the game on normal, and the enemies are just pushovers. I played a few levels on hard, and it didn’t feel that different, although, you have less life as the difficulty increases. On extreme difficulty, a single hit will kill you. Spacewing War’s difficulty level isn’t exactly the problem, though. 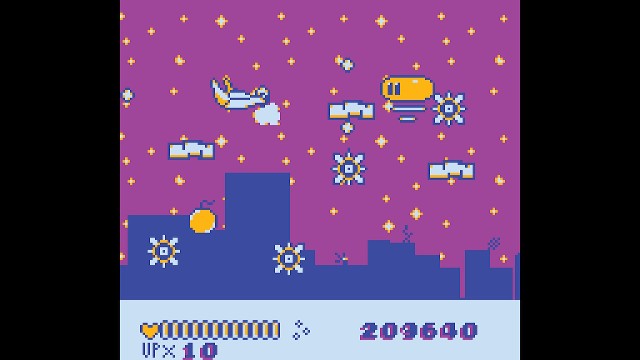 There are multiple enemy types, but none of them do anything interesting. They mostly float around or fire a few shots. They all blend into each other. Mid-bosses are a little more difficult but not any more interesting than the standard fare. The game’s bosses are more unique in their attack patterns, but they just aren’t that aggressive. Just move, shoot, and dodge your way to victory—there’s no real strategy to it. There are no specific weak points or evolutions either. The game’s final boss puts up a fight and has some interesting moves. It can slow down specific parts of the screen, which is an interesting twist that not only affects your movement speed but also your shots. I wish more of that creativity could be seen elsewhere.

Unfortunately, Spacewing War’s level design doesn’t fare much better. There are seven levels, and it does not take long to get through them. The walls won’t damage you either, for better or worse. The most important thing to know is that there are instances in which you’ll have to move quickly to avoid getting crushed by the screen. It’s an old shmup trope. I didn’t care for it back in the day, and I still don’t like it. It’s designed to bleed quarters out of you. A few levels have bombs to destroy walls or switches to open pathways, but you’ll just get squished if you fail at either. It doesn’t help that you can also move right through destroyable barriers and enemies. There’s just nothing memorable about the game’s simple level design.

On the plus side, each level is broken up into sections, so if you die, you never go back that far. You also have a set number of lives and no continues. If you lose them all, you have to restart the game. Like most shmups, you can collect 1-ups in-game and by hitting point milestones. There are also hidden areas full of health pickups, 1-ups, and medals, which only contribute to your score. 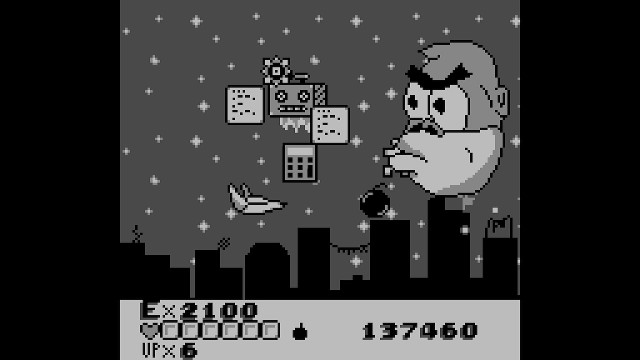 There are several unlockable modes. The first is a challenge mode, which is just a slightly more difficult version of the original game. Some of the enemies are larger, and there are a few more environmental differences. I didn’t see anything significantly different, though.

After you beat that mode, you unlock a mode in which you pilot a UFO. This mode is different from the base game. The UFO has a different weapon system that lets you purchase shields and attacks. It’s somewhat akin to the weapon system in Gradius. Forced scrolling is replaced with a more open area design. You fly and the screen scrolls with you. While this mode is different, it still inherits most of the original game’s problems. In a way, it’s slower and more lethargic than the original because the areas are larger. 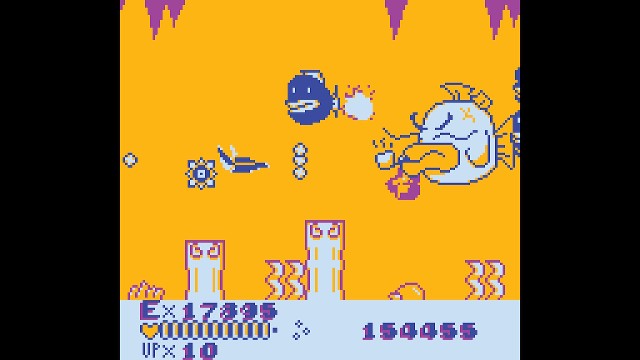 The next mode challenges you to use the UFO to break targets strewn throughout large areas within the time limit. It’s mildly enjoyable. If you hit the wrong targets, enemies spawn to chase you. There are far more environmental hazards, too. Unfortunately, the maze-like stages can be frustrating, especially when warp points get added. I found myself frequently scrambling and failing to find that last target. I didn’t have the patience to complete all the levels.

After that is the obligatory boss rush mode, which also has a harder version. Think about the boss rush mode in recent Kirby games but add a plane. You get a set number of health items from which you can choose before each battle, and that’s pretty much that. Admittedly, I didn’t unlock everything. Two extra options in the menu are still locked, but I don’t see myself going back for those. 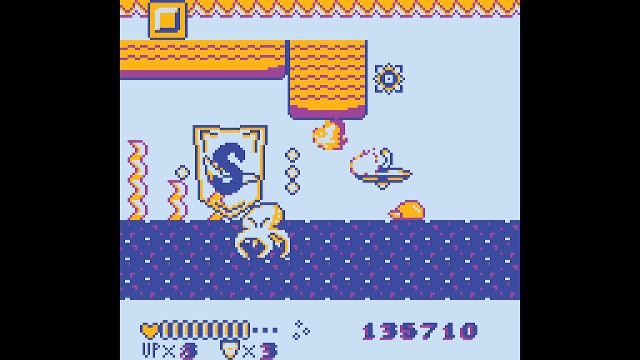 While reviewing Spacewing War, I thought about it as a Game Boy game and as a modern retro-themed release. As a Game Boy game, Spacewing War is solid but unspectacular. It can’t possibly hold a candle to R-Type DX or Project S-11. It’s not exactly fair to compare it to the former, which is a legendary shmup, of course, but that’s what I’ve got to work with. Back in the day, I think its straightforward design would have performed admirably. Compared to other modern retro-themed shmups, Spacewing War is up against some of the best of the best, and a new shmup has to have something to make it standout. There’s little room for error these days.

Shmup Is a Verb

Spacewing War is a straightforward shmup in a crowded genre. Its Game Boy aesthetic is pleasant, it controls well, and it provides a decent challenge. It just doesn’t have that spark to set it apart from its brethren. It needs a shot of adrenaline and a confidence boost. Still, it’s not a bad way to spend an afternoon if you need to scratch that shmup itch. 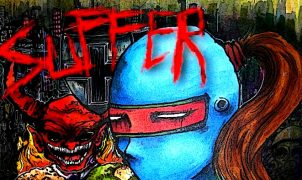