Kapital: Sparks of Revolution Review: Riots in the Streets — Tell me, where were you? 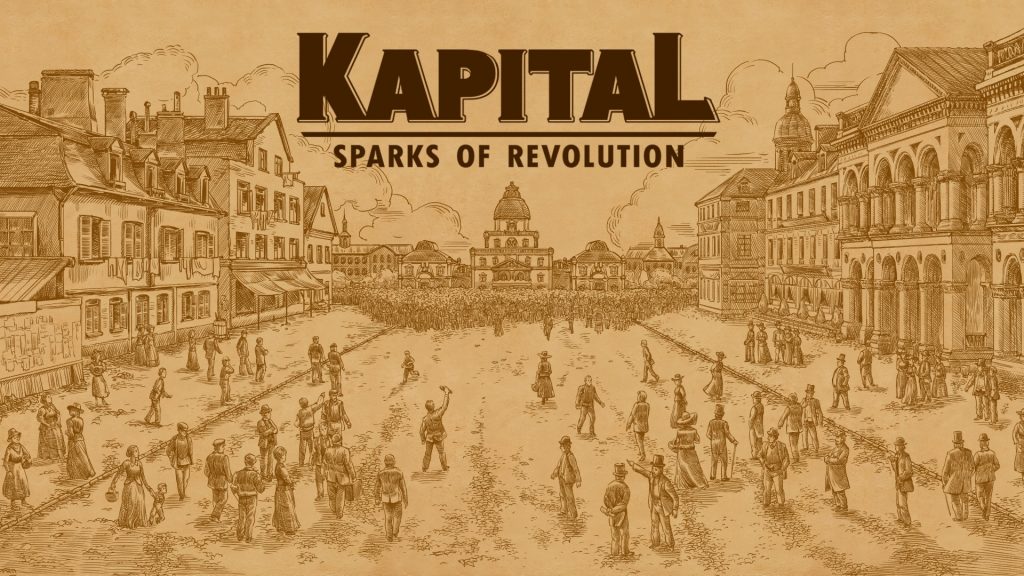 When a completely novel experience enters the video game medium, we praise it for its originality. When enough games copy it, we welcome them all as part of a new genre. But we can’t get to that point unless we overcome that in-between portion, when only one or two games have been clearly inspired by the uniqueness of the first — when a hypothetical, critical player may see little reason to play the new iterations when they can enjoy the classic?

More to the point: Frostpunk may have popularized the notion of a city-survival simulator, and Kapital: Sparks of Revolution clearly desires to take the torch its passing — but is it up to speed or falling a bit short? And will players balk at the $25 pricetag and go back to the frigid original, or will they patiently partake in a burgeoning genre? 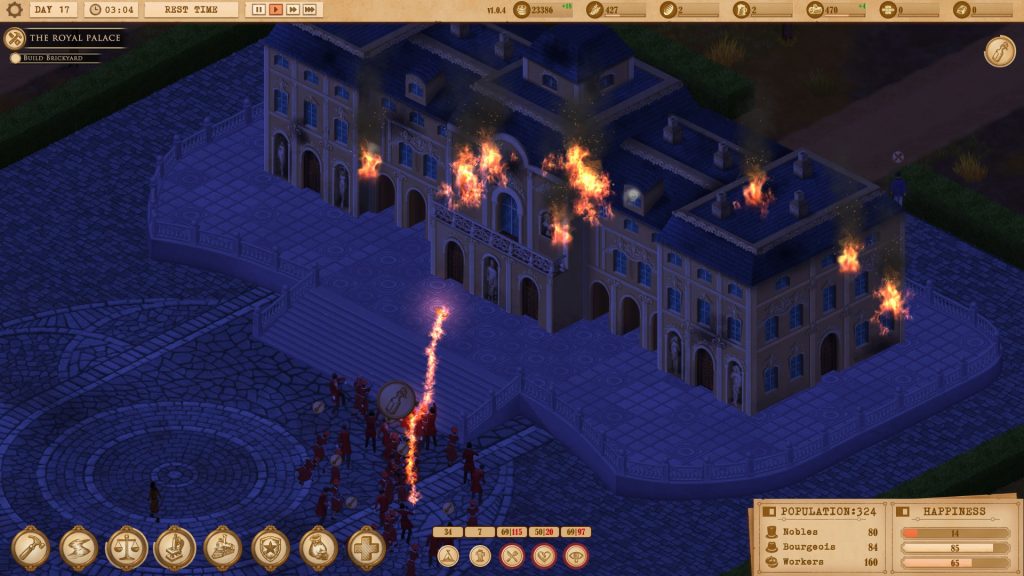 Developer Lapovich Team and publisher 1C Entertainment is hoping for the latter with Kapital: Sparks of Revolution, a “sandbox economic simulation game about class struggle.” Available on PC, Kapital: Sparks of Revolution asks players to make some difficult and even fatal decisions as they spread what limited resources they have to their city’s people. Knowing you can’t make everyone happy — that blood will be on your hands no matter what you do — how far will you go to stave off unrest?

Kapital: Sparks of Revolution opens up on a turn of the century post-war European city, a once thriving metropolis laid bare by occupying forces. Naturally, you’ve been elected mayor, so it’s up to you to rebuild — not alone, of course, as you’ll need advisors from all walks of life to weigh in on critical decisions. It becomes immediately clear you’ll have to keep three distinct classes happy, loyal, and, of course, alive: the workers, the nobles, and the bourgeoisie. What works for one class is often at odds with another, so a careful balance between the three is important — or else. 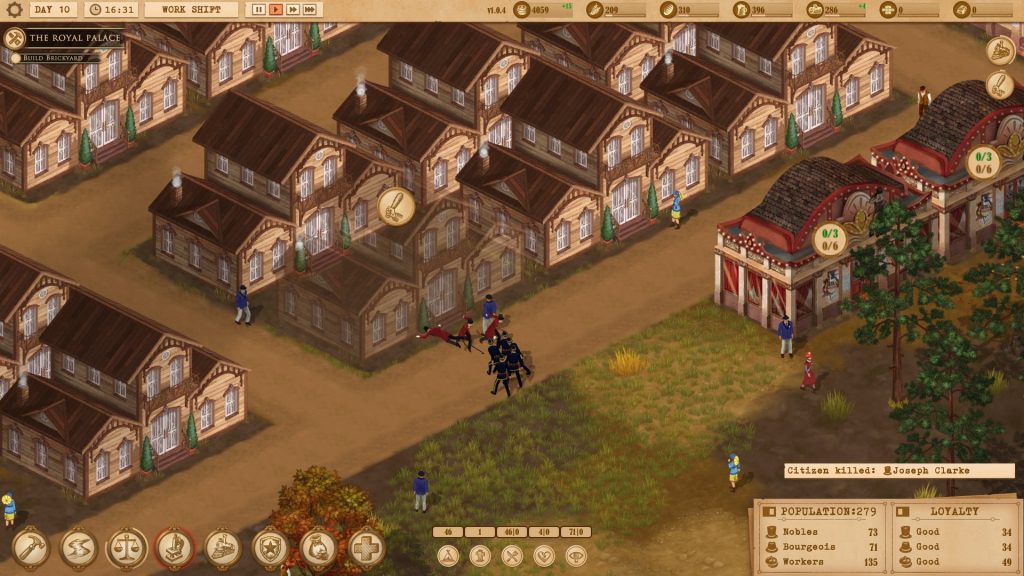 Once the basics are grasped, Kapital: Sparks of Revolution unfolds into a surprisingly addicting experience — I hardly noticed as a literal 9 hours whizzed by in a single sitting. There’s a good flow of industry, where grain makes both food and beer, wood and eventually stone and steel are needed to make homes, government offices, and commerce, and plenty of buildings have a ton of smaller mechanics to play around with that impact the overall balance of things, such as security cracking down on corruption at the expense of the noble class’ happiness.

As Kapital: Sparks of Revolution is a city-survival simulator, there are supposed to be events that would act to tear down your city from within. Epidemics, gangs, lack of resources, and more threaten your people’s survival, and it’s up to you to make the tough decisions that may prove fatal for some to ensure the safety of all. Double shifts at the food factory may mean a decrease in happiness and make employees so tired they’re more likely to get injured and even die on the job, but without their effort, everyone will starve. Sure, you could build a cemetery to bury the dead bodies and avoid the living getting sad and sick, but you were saving that money for a much-needed hospital to help prevent people from dying in the first place. The game makes it very clear that you will never have enough resources for everything you want to do, so bodies piling up in the streets shouldn’t surprise you when things go south. 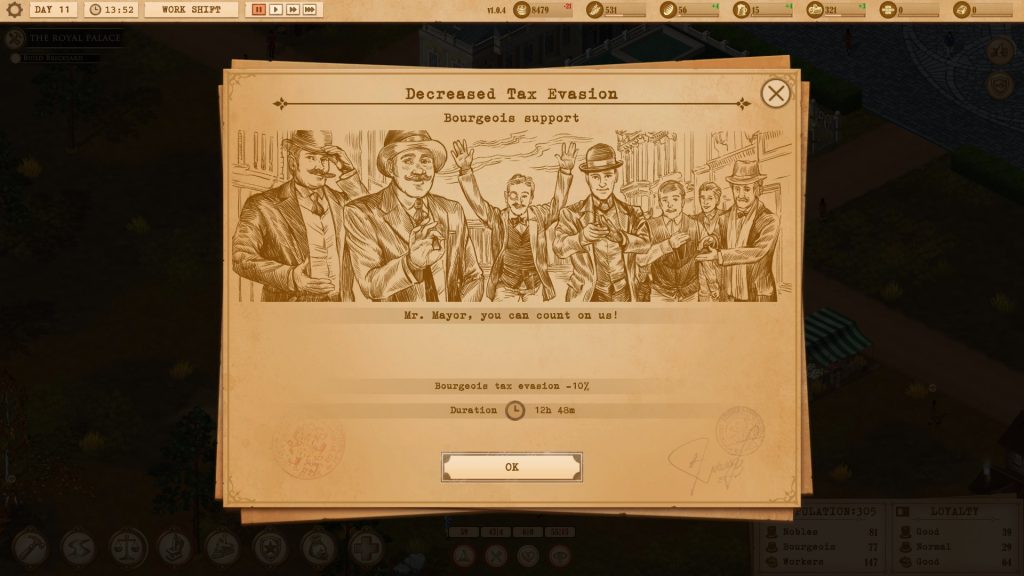 To be honest, that’s my only real complaint about Kapital: Sparks of Revolution, but it’s a big one — the game’s difficulty was perhaps over-exaggerated a bit. Like yeah, my nobles got upset once and tried storming the palace, but that was much ado about nothing as I was able to fix it up within a few minutes. Hostage situations may arise but the ransom is cheap, epidemics happen but building enough funeral services and making them work a double shift in one day takes care of the spread issue, and as long as you build enough shops both people and the economy thrive. My first foray into Frostpunk resulted in such a devastatingly dire disaster that I was lowkey traumatized, but Kapital: Sparks of Revolution? I created a veritable utopia with maxed happiness and maxed loyalty from all classes — riots very quickly became a foreign concept.

Keeping that in mind, I will say that I really enjoy games like this — only a *little* bit of grief so I can really focus on the city-building aspect — but since this is touted as such a difficult experience, be aware that it truly is conquerable fairly early on. As long as the gold rolls in, everything else will fall into place. The devs stress that you can’t make everyone happy, but honestly? It’s easy to do so. And that’s okay, but, you know, mitigate your expectations.

I wanted Kapital: Sparks of Revolution to continue running with the city-survival genre that Frostpunk put into place, and while it is definitely the relaxing, low-stress city-builder of my dreams, it is not the difficult experience it markets itself as. You may struggle for the first hour or two before really settling into a utopian paradise, but you will get to that point of smooth sailing sooner or later. For a game about revolution, the only thing revolutionary here is how chill it is; Kapital: Sparks of Revolution is fun and addicting, but it’s hardly the stressful city-survival simulator it tries to be. I’m more than okay with that, but are you?

Full disclosure: This review is based on a copy of Kapital: Sparks of Revolution provided by the publisher.