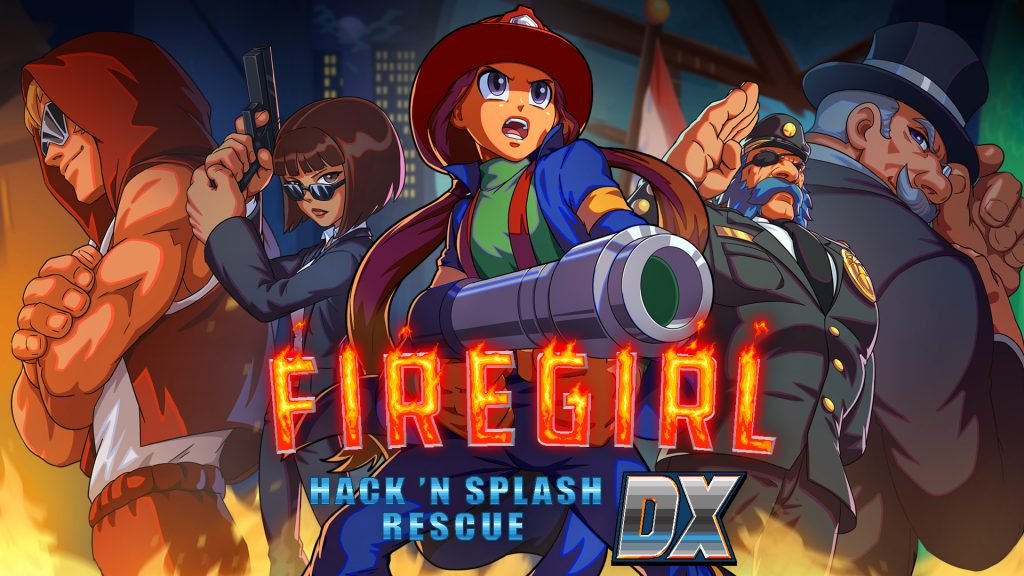 As one of the few folks here that have been following Firegirl: Hack ‘n Splash Rescue since the beginning, I’m thrilled to finally review Firegirl: Hack ‘n Splash Rescue DX. It’s the definitive edition of the game, bringing it to modern consoles, including my favorite, the Nintendo Switch. Additionally, this iteration of the game has been tweaked and balanced to allow for new firefighting strategies and streamlining features to aid players. The real question this Firegirl: Hack ‘n Splash Rescue DX review aims to answer is if this game lives up to that promise, or whether it was just as good when it was just called Firegirl? But before we dive in, and mostly for the sake of my fingers, I’m going to be referring to the game as Firegirl DX. Because that subtitle is a mouthful. With that out of the way, let’s talk about this fiery adventure on Nintendo Switch!

Just Another Day at the Firehouse 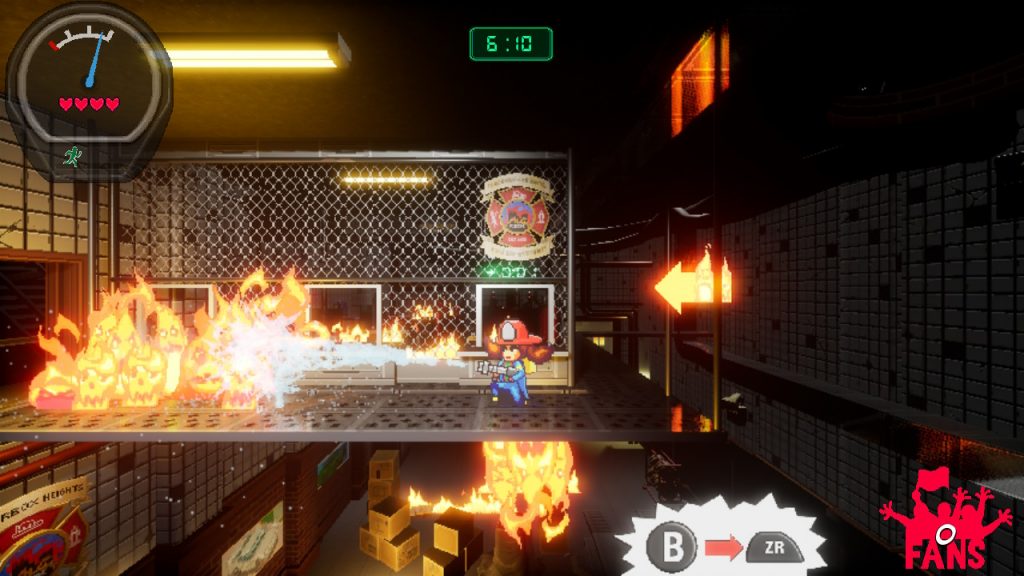 Firegirl DX begins with you learning the ropes at the Firehouse, which happens to be on fire. And not ironically either. There’s something crazy happening in the town of Tinderbox Heights (actual name), and it’s not just a case of a pyromaniac with too much free time on their hands. There’s a supernatural component to the rash of fires, which you’ll gradually discover as you play. Someone or something is causing them to happen with the aid of something called the Firelord, which is portrayed as a towering burning skeleton. Probably not the best time to decide to become a firefighter, but since your dad died fighting fires, you feel compelled to follow in his heroic footsteps. 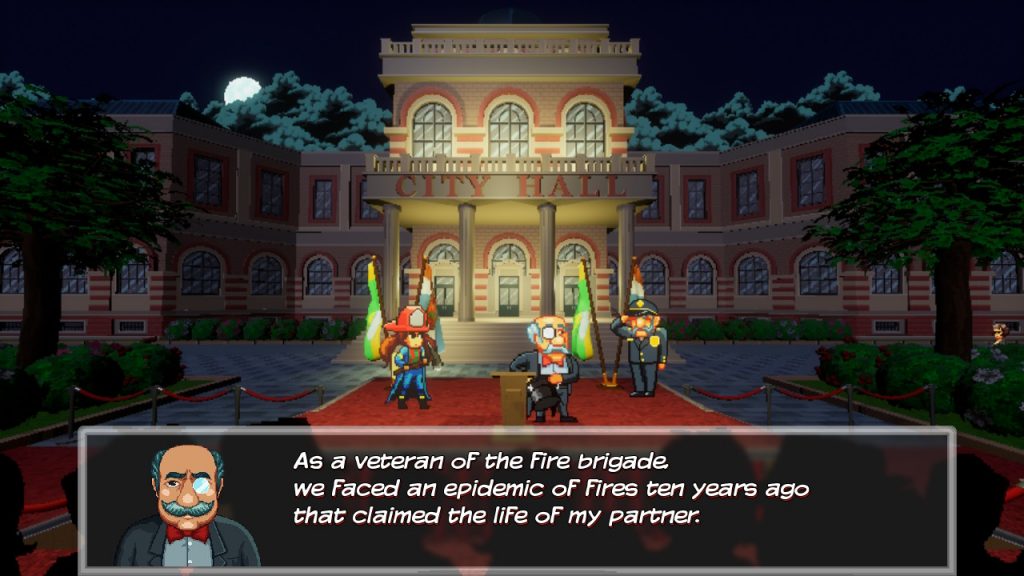 I should mention, though you’ll learn a bit more about the titular Firegirl as you play, she’s very much a silent character. She never speaks, and most of what you learn is less about her and more about her legacy. While that’s not necessarily a problem with a rogue-lite, I always love an excuse to get lost in the story of a game, and it was hard to do so with an essentially emotionless main character. Sure, she’s spunky and heroic, but that’s it. If you want a deeper dive, this isn’t your game, despite the unexpected plot twists that occur. So hopefully, you’re playing Firegirl DX for the gameplay, cause that’s where the developers put most of their focus.

Race the Clock and Put out Fires 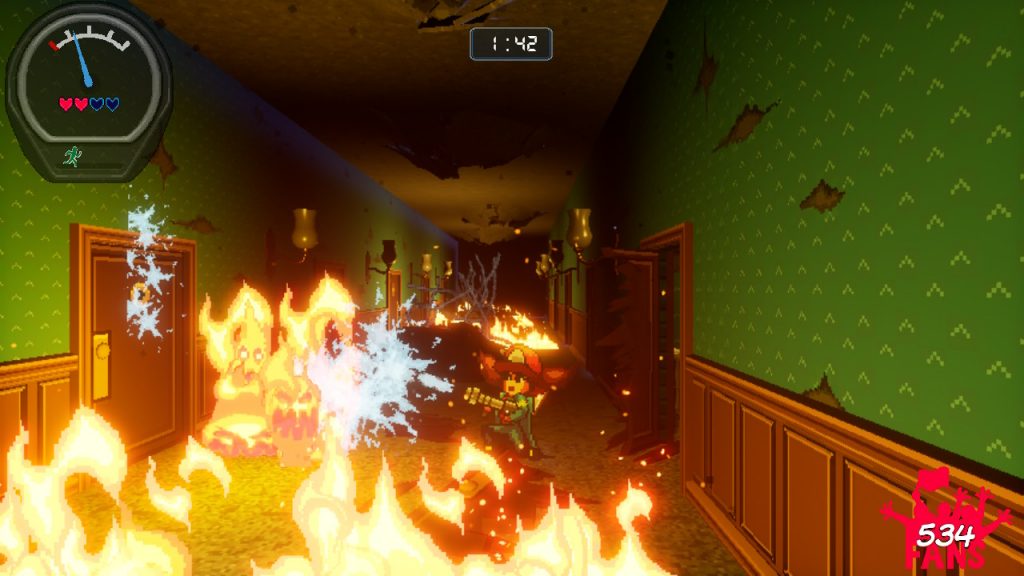 That said, I haven’t had this much fun putting out fires since The Magical Quest Starring Mickey Mouse. You’re able to effortlessly blast water in any direction you want, and by shooting it downwards as you jump, you can actually fly around. This is an essential technique, and I admit it took a little getting used to. If you don’t time the button presses just right, you’ll sort of hover instead of bursting upwards, and gradually fall back to earth. But once you get the hang of it, it’s a ton of fun jetting around. Just remember you only have so much water in your tank, and once it’s out, you’re out of luck until you replenish it. You’ll also make repeated use of your fire axe to break through doors or other obstructions. The key thing to remember is that you’re always fighting the clock as you rush through catastrophes, searching for survivors. 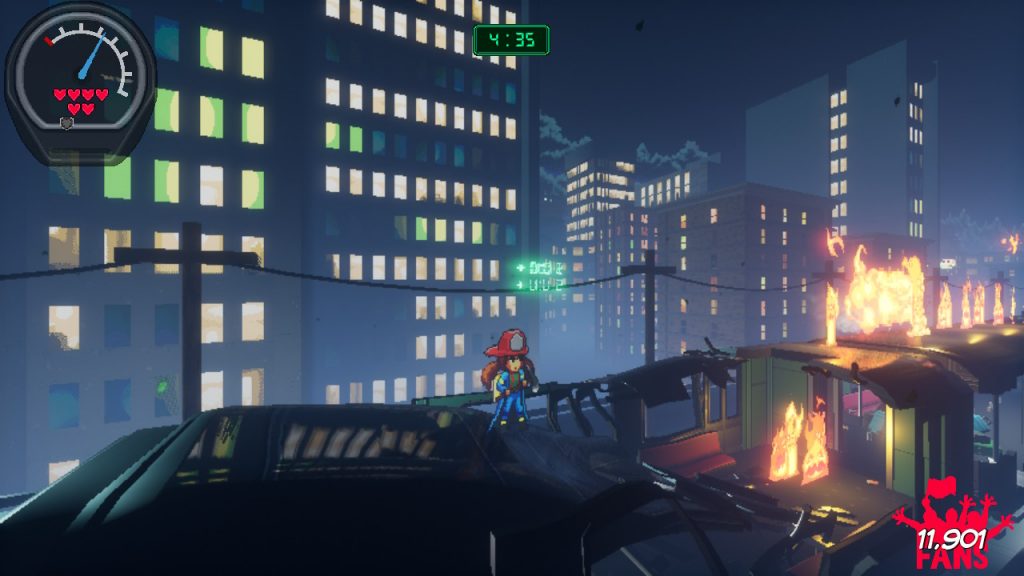 Now, normally I get really upset when a game forces a time limit on me, but in Firegirl DX I was okay with it. Mostly because it just made sense. It’s not like the fire is going to wait on you to find and rescue people, after all. And that’s talking about normal fires, not the monstrous fiery abominations you’ll face here. Some flames will grow legs and clomp around, others will transform into burning bats and fly into you, some breathe fire at you like a flamethrower, and much more besides. There’s at a ton of wild creativity on display, and it very much made me enjoy the experience more. Best of all, you can find clocks to increase your time limit in stages and earn a few more seconds by putting out flames. Just remember, if you aren’t able to get to the exit in time, you’ll lose the level. This causes you to have to pay a hefty hospital fee and lose out on cash you would have gotten for finding survivors. 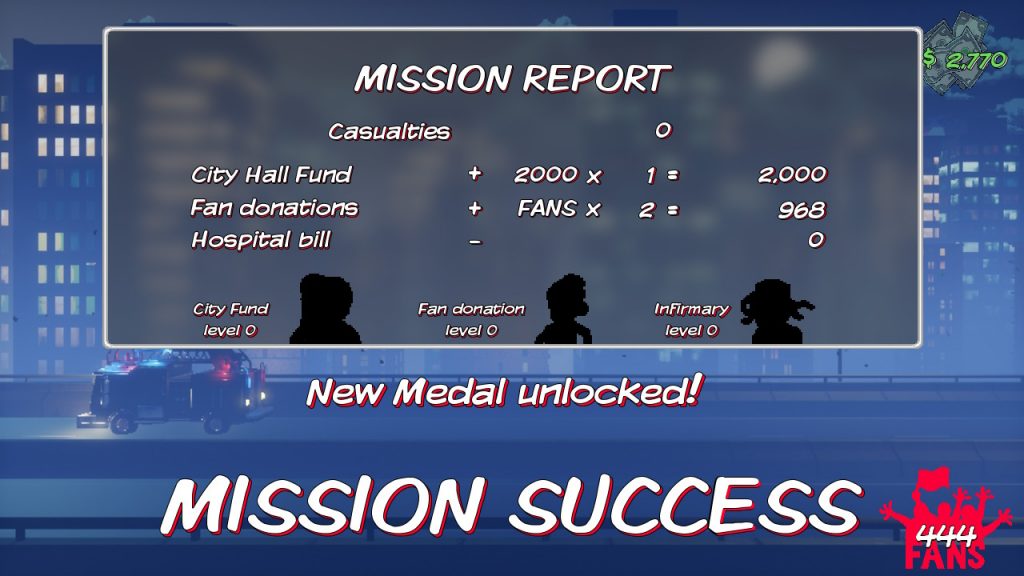 Yes, you get paid for finding survivors. Which might sound horrible and mercenary, but as a fan of rogue games, I appreciated this feature. You’ll actually accrue a fanbase by playing well, and they reward you with more cash based on how daring you are. This includes going out of your way to find missing animals, putting out every fire you can, and racing the clock. You’ll also find some special survivors that will become a part of your team back at the firehouse, opening up a ton of options. Early on, you’ll find one that lets you enhance your tank size and hose, letting it blast longer, farther, and faster. You’ll also open up the option to decrease costs, increase your number of fans, boost your starting health, and much more. It all costs cold hard cash, so do your best not to keep dying and save all the survivors in every stage. It’s an excellent way to keep you playing, since, as fun as Firegirl DX is, it has one big problem. Namely, it can get pretty darned repetitive.

Geared Up and Nowhere to Go 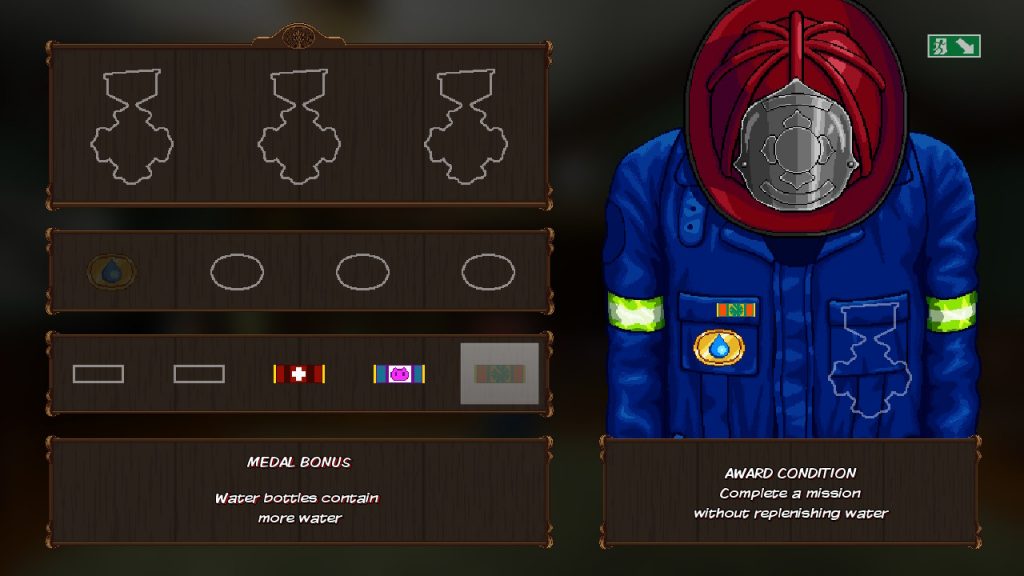 One thing that helps is medals you can earn and then equip at the Firehouse. These can do handy things like reducing how much water is used when standing on solid ground, increasing the number of health kits you find, and the like. I got nearly all of the medals in my time with the game, but there are still a few I need to earn. Just keep in mind the game never explains you have to actually equip the medals for their effects to work. I only discovered that from a random notice a few hours into the experience. Also, there’s a handy shop across the street from your home base where you can buy really helpful new equipment. These will give you some protection from damage as well as speeding up how fast you can swing your axe, both of which are truly lifesavers. 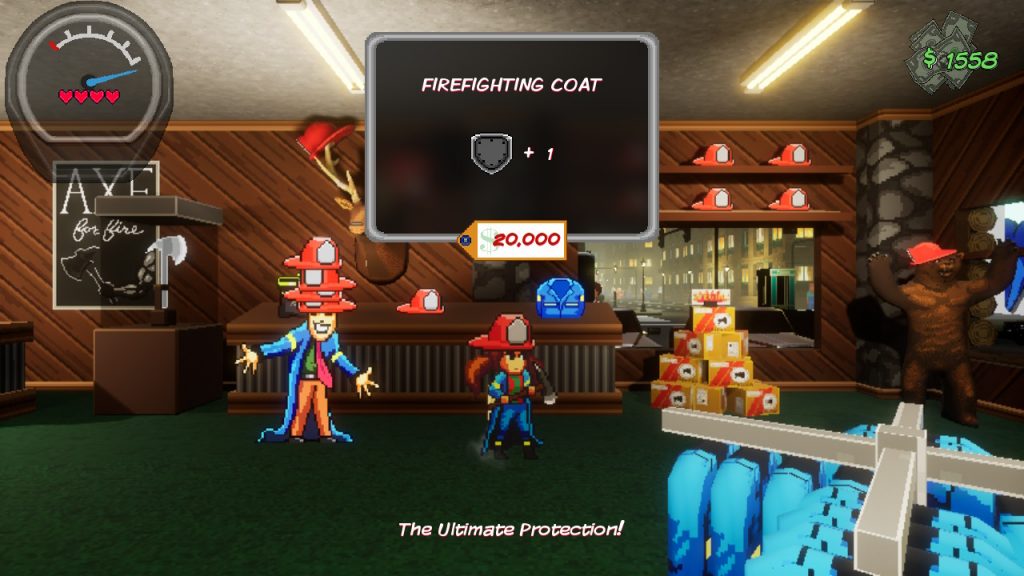 Now, I will say that the core gameplay here is very solid and enjoyable. But as any fan of the rogue genre can tell you, variety is everything. Take games like The Binding of Isaac. They’re constantly updating and adding new content to that game to keep things feeling fresh. By contrast, there’s the terrific Hades. While a wonderful game, the core loop is incredibly linear, and they never bothered to add additional content after the fact. Well, that’s pretty much the same problem Firegirl DX has. There are only a handful of different scenarios you’ll play again and again – burning building, burning forest, a runaway train, and Nekotomi Plaza. Other than one endgame scenario you can’t face until you’ve found enough of a particular item, that’s it. And despite the randomly generated and mixed-around environments, they can only be so different after you’ve faced them all more than a dozen times. 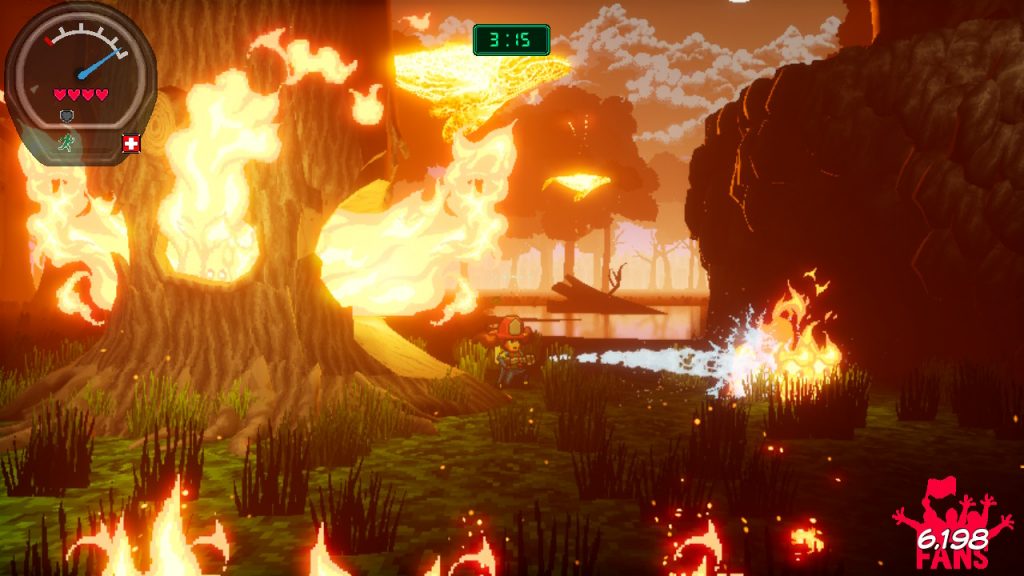 Visually, Firegirl DX is a really stunning and attractive game. It looks like some time-lost SNES title, but with lots of cool background details and stunning albeit sad vistas of roaring flames. They make great use of light and dark to keep your eyes busy, and even with the limited number of scenarios, I didn’t get bored of what I was seeing. Musically Firegirl DX is also a treat, with lots of bombastic and catchy music to keep you racing the clock, as well as excited announcements from the announcer. There’s even a mournful little tune that plays when you fail to save a survivor, which goes a long way to making sure you do better next time. 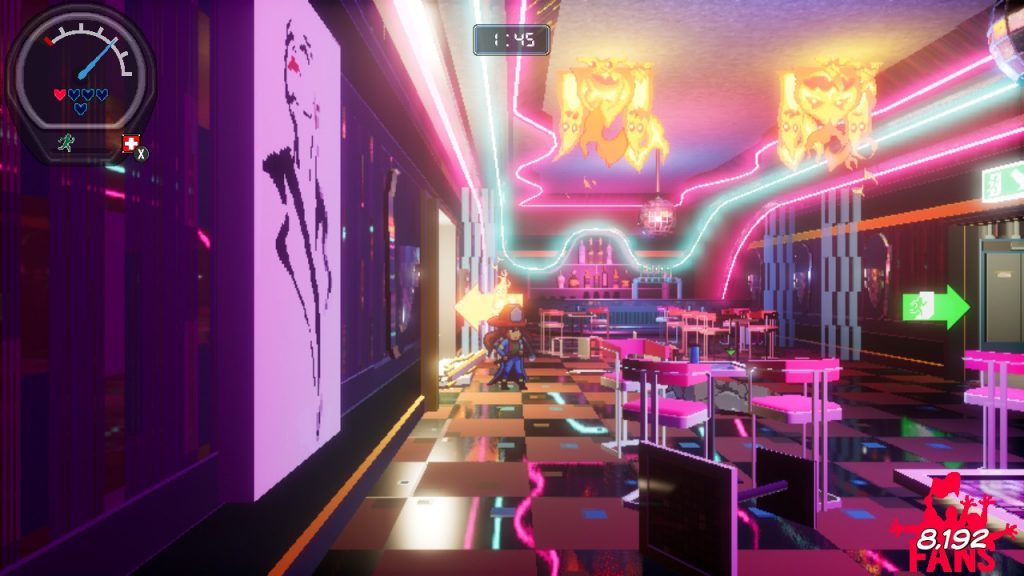 Though I very much enjoyed my time with the game, there are some issues it has that kept it from a more glowing appraisal. One is a minor yet annoying issue that happened randomly during the cutscenes. The dialogue would often skip forwards unexpectedly without me actually pressing the A button. It wasn’t all the time, but it made it so I never knew when the game would rush past key plot details. Also, while the platforming is generally very solid, there’s some areas things got wonky. In the rocky mine areas of the forest, my Firegirl would sometimes touch rocky geometry and start moving back and forth. Other times, she would get stuck in it, forcing me to fly to safety with my hose. 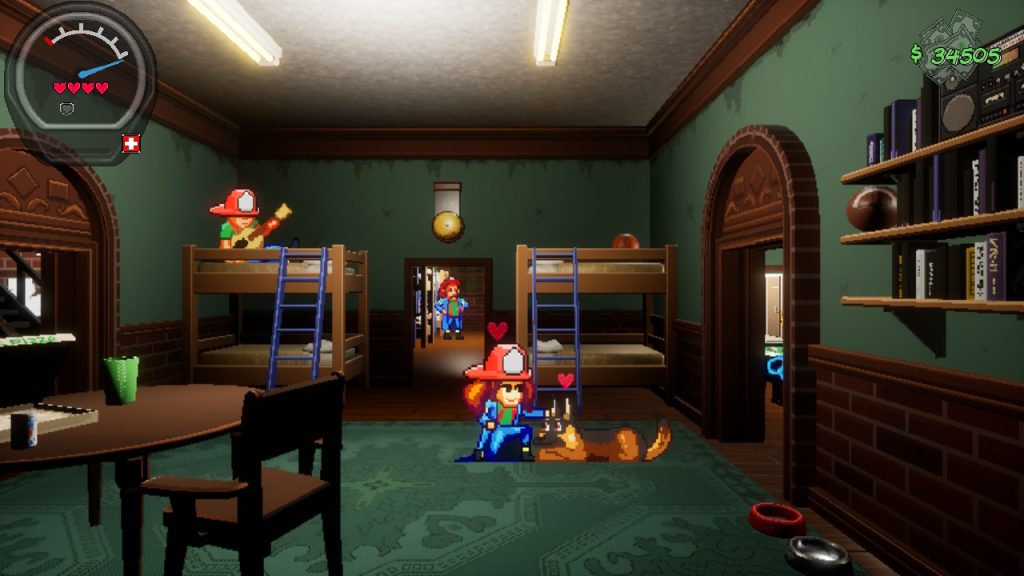 If you rescue this very good boy, he’ll help direct you towards survivors. And yes, you can pet him at the Firehouse.

I’m also very much not a fan of fall damage, and it happened all the time in the game. This wasn’t a glitch per se, but until I mastered the art of gliding downwards on a jet of water, I took a lot of unnecessary damage. Plus, while the chief tries his best to aim you towards where potential survivors might be, it’s a very rough approximation. Often you’ll have to weave back and forth through many floors to find the survivor, he points out. When you consider that most doorways burst into flames once you pass through them, this can become a bit of a problem. Because while you can put out most flames, you can’t do so with these particular gouts of fiery death. Honestly, if the game had just included some optional mini-map or sonar ping that I could install, this wouldn’t have been such an issue.

Despite a few rough spots in the experience, I’m still very happy I was able to review Firegirl DX. It’s a lot of fun playing rogue games on my Switch, since they’re so custom-tailored to a more portable mode of gaming. While there are some minor glitches and design flaws that hold the game back, fans of the rogue genre should enjoy this utterly unique firefighting experience.