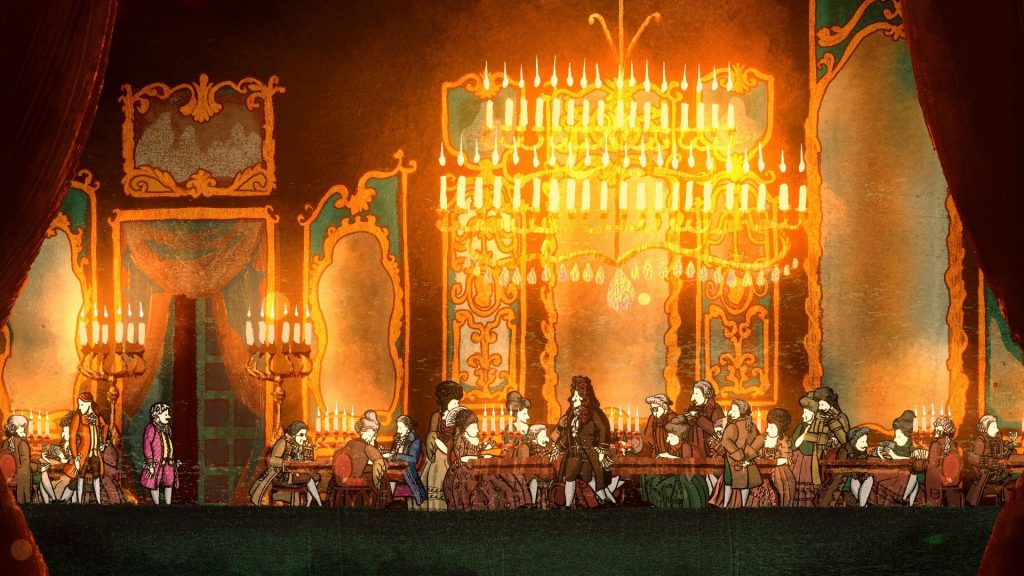 You there, garçon! More wine, if you please — this riveting game of cards has left me parched, and… what? I lost? No matter, another round and another glass of wine are in order. I… lost again? The cards are really not in my favor this evening! I shall drown my sorrows in another glass, if you please. Now, deal me another hand, and I sha- HEY! How can I have two 8 of hearts? You’re CHEATING! Gendarmes, after them! This comte and his servant boy have taken have taken every single livre on me… not to mention my pride!

So begins Card Shark, a not-so-typical card game that requires players to deal a good hand — or else! Developed by Nerial (Reigns, Reigns Her Majesty) and published by Devolver Digital (Loop Hero, Trek to Yomi), Card Shark invites players to “enter a world where you’ll need to play your opponents better than you play your cards.” Set against a stunning baroque background with dulcet harpsicord tones, elegant gold-gilded salons, and, of course, free-flowing wine, Card Shark keeps its cards close to its chest at first, but slowly plays a fascinating hand that’ll have players dealing in time and time again no matter what the stakes. 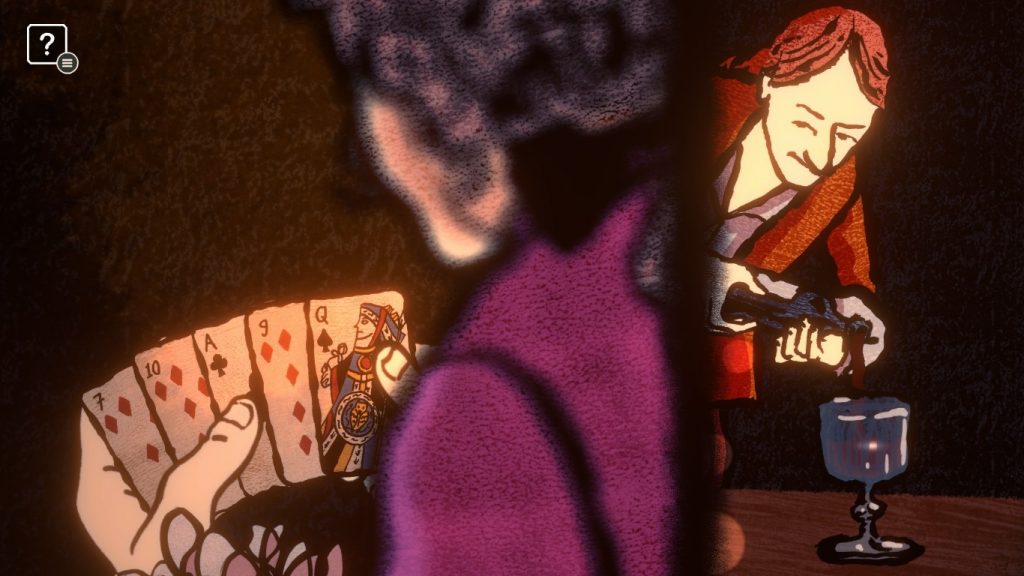 Card Shark takes place during 18th century France, which, if you were lucky enough to be nobility, was an dazzlingly opulent time to live. Sure, Louis XV may have lead to the decline of the French monarchy and its lavish way of life, but that didn’t matter much if you liked to live dangerously. Take Comte de Saint-Germain, for example — with his powdery, coiffed wig and perfectly placed mole, the well-to-do man of means seemed to enjoy little more than a fine wine and a game of cards. It’s only upon closer inspection that the congenial gentleman shows his true hand, full of aces he had stashed up his sleeve, no less. You see, he’s looking to cheat his way across France, and he needs help to do it — the perfect helper, of course, being a mute young barman.

And so, the two of you traipse through France in a horse-drawn carriage, learning sleight of hand card tricks as you go. Be it hand signals, cleaning the table in a particular manner, mastering indiscreet shuffling while injogging necessary cards, or even taking a separate deck to another room, meticulously ordering it to be in your favor, then returning to cut it into the existing deck with practically magical timing, you’ll help the Comte rake in the cash… and maybe even more. 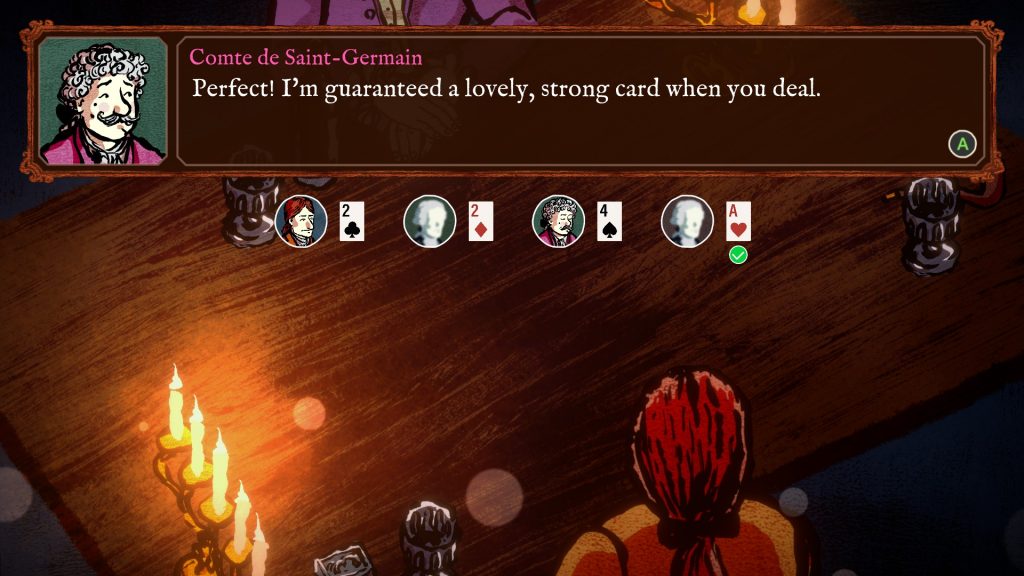 If you couldn’t already gather, Card Shark is less about playing cards and more about playing your cards right — through cheating, of course. The actual game doesn’t matter in the slightest; in fact, they’ll breeze right through it, leaving you with only the sneakiest of card mechanics to worry about. Once you get the swing of it, Card Shark is a genuinely thrilling experience that left me simultaneously craving more yet exhausted from the constant loop of adrenaline rush and tension release…

…but OH, LA VACHE do you have to practice a ton to get to that point.

There are a seemingly endless amount of ways to cheat at cards, which means there’s an equal amount of controls that are needed to pull of these lucrative stunts. After an hour or two players will pick up around 8 complex tactics, expressed in the form of small mini-games set against a timer — your opponent’s suspicion meter. Go too quickly, and you might make a mistake that costs you the game — and your coin; go too slowly, and your opponents will force you to make a hasty exit, lest you end up staring down the barrel of their flintlock pistol. 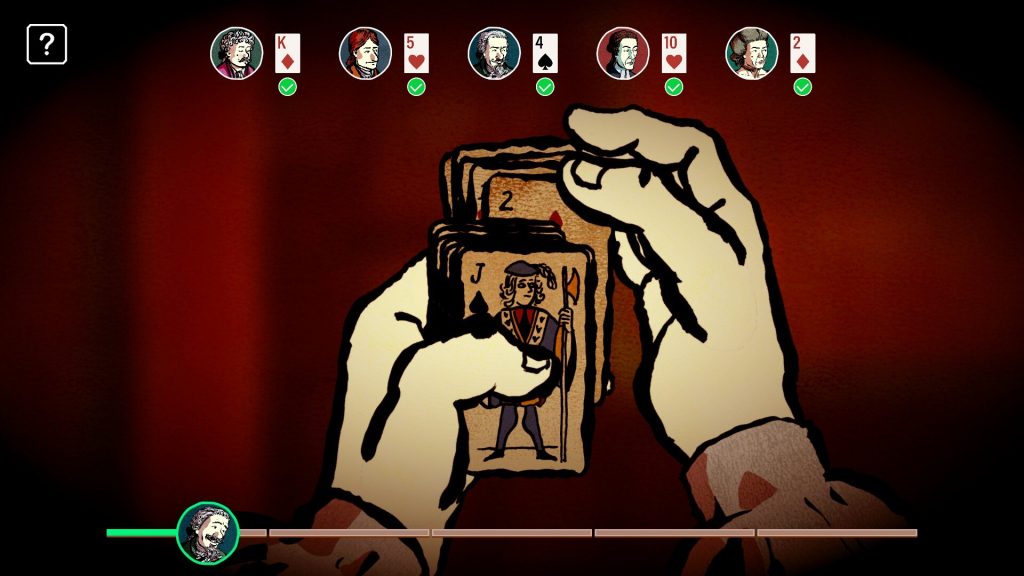 It’s here where I have my one knock against Card Shark — the controls. Card Shark is best experienced with a controller, and even then you’re in for a tough time if you take extended breaks or have a bad memory. I had to write down the controls on post-its to remember each specific cheat: the injog shuffle is down, right, then down until you’ve shuffled your deck, cleaning with your cloth means left/right for clubs, clockwise for hearts, up/down for diamond, counter-clockwise for clubs, choosing specific cards has the Comte’s hand in a fixed position sometimes, while the cards slide down as a new draw bumps the last drawn off… it’s complex, and I admire that, but without a ton of practice, you’re in for a Versailles-sized headache.

Of course, not everyone is perfect, and messing up here and there is bound to happen. It’s nice that the opponent’s suspicion meter goes down if you give them a win or two, but what doesn’t make sense is a guaranteed lose if you don’t get everything exactly as desired. You only give the Comte 2 Aces instead of 3? Too bad — not only will you never win by skill, you’ll have to play out the rest of the rouse despite knowing you have a 0% chance of success. It’s a frustrating point of contention, but the flipside is that you win every round you cheat perfectly at, plus playing out the entire series of cheats is good practice, I suppose. That’s just the way the cards fall, I guess!

Card Shark is absolutely the most thrilling card game out there, made even more impressive by the fact that you don’t actually do much by way of playing cards. This scintillating sleight of hand title has inadvertently taught me a lot about card tricks, all set to gorgeous Baroque music and stunningly illustrated scenes. The mechanics may feel a little difficult at times due to an onslaught of varied controls, but once you master them, you’ll feel like a card comte(ss) yourself. If you want something enthralling with high production value and even higher stakes, Card Shark can deal you in.

Editor’s note: This review is based on a digital copy of Card Shark provided by the publisher.