Before I begin this review, it’s only fair to give readers a warning that this game does explore some pretty intense topics, chief among them being suicide. Divination, from eastasiasoft and Mojiken, is a short but surprisingly intense game. A unique blend of mysticism, cyberpunk, and tech-noir, Divination is quite unlike anything I’ve ever played before.

Their Fate is in Your Hands 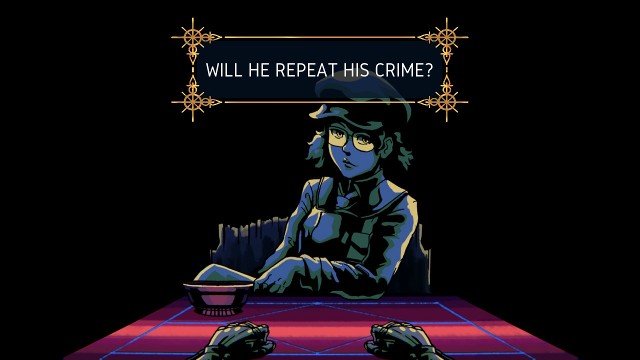 In Divination, players take on the role of the Diviner, a pair of disembodied hands ensconced in a room full of screens. The game is set in a dystopian future in which Mother, an incredibly advanced AI created by humans, committed suicide three years prior, setting off a chain of suicides in both humans and robots. The situation became so dire that humans had to modify the robots to stop them from being able to commit suicide. There’s a sense of hopelessness and powerlessness that pervades the entire game, and the question of free will (for humans and AI alike) figures prominently in the experience. Most of the story is told through interactions with clients and the questions that you will ask them. In-between each divination session, you’ll watch news reports from the world outside, which are directly influenced by the answer you give each client. Because the game is so short, I can’t tell you much more about the story, but it is surprisingly engaging for its length. 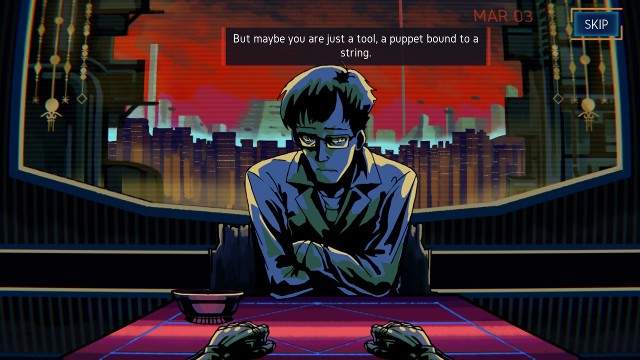 Throughout the course of Divination, four different clients will sit down before you and ask just one question. Armed with a set of ancient runes, you’ll arrange the strange symbols and read the future contained within them. What you tell each client will have effects that ripple across the storyline, and you’ll have to manipulate each to create the perfect conditions for the true ending. Again, I can’t tell you much about the runes without exposing some pretty big spoilers, but it’s definitely an interesting mechanic in the game. Depending on how you arrange them, the final image you’ll present to the client will change, and the answer to their question will alter accordingly. You’re not given any instruction on how to arrange the runes, but thankfully it’s fairly intuitive.

Pluck at the Threads of Fate 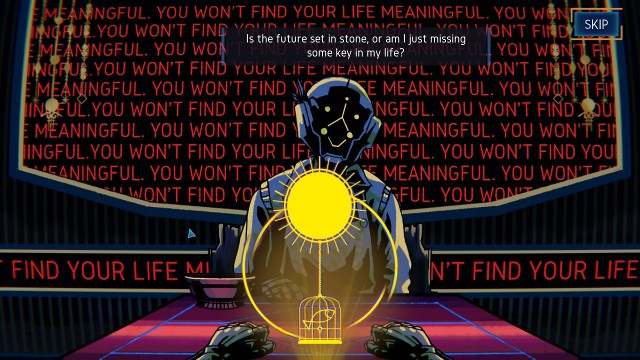 Artistically, I can’t find much to fault with Divination. The game’s dark graphic novel style is perfectly suited to the story. While you’ll only ever interact with four different characters, each is drawn in such a way as to really capture their personalities. The runes themselves look great as well, each combination of symbols creating a hologram that represents your prediction. I especially liked the way the client’s question flashed across the big screen behind them when it was time to divine their future. The soundtrack is largely forgettable, but honestly, I didn’t find that much of a problem since the game is so short.

Divination isn’t without flaws. I do wish the game was longer, had additional clients to interact with, and think that the rune system could have been expanded upon to provide more story branches. Because you’ll only tell the fortunes of the same four clients with each playthrough, it can start to feel very repetitive. Thankfully, there’s an option to skip each scenario by selecting a fortune you’ve previously given, which makes it easier to suss out the true ending.

Overall, I enjoyed my time with the game. Divination is unique, and explores some pretty intense topics, with an appropriately dark art style to match its themes. It definitely gives off vibes of those 80’s dystopian sci-fi films, which all focus on the same question: are any of us truly in charge of our own fates?