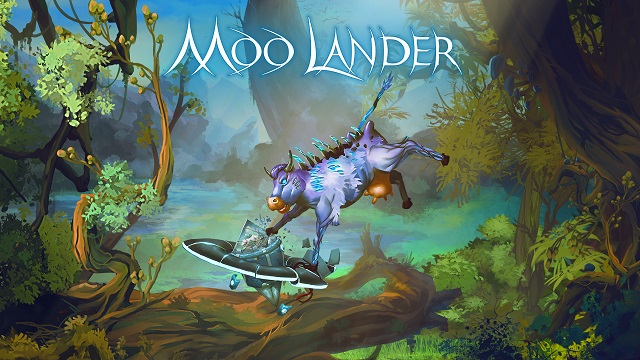 Bovines – part of balanced breakfasts and savory suppers alike. While I see a plethora of these things on my drive to work every morning, the most memorable associations I can recall between cows and video games is either Diablo’s cow level or slaughtering cattle at Lumby on Runescape. So when Moo Lander was brought to my attention, I, as a certified Midwestern countryfolk, was obliged to go determine the richness and quality of these digital wildlife hijinks. The bizarre, Metroidvania-esque adventure that ensued not only more than entertained me for a good few hours, but it reminded me that sometimes fun and goofy really is all you need, and Moo Lander doesn’t skimp on making this trip amoosing and surprisingly thoughtful in design. 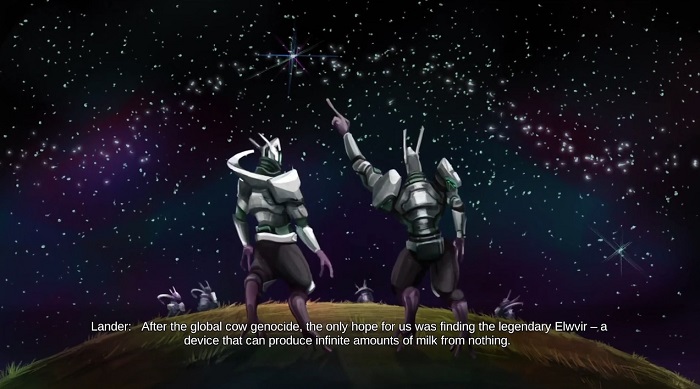 The story goes that you, a starship pilot simply named Lander, are the last hope of a dying planet. You are given a starship with an AI named Hamilton to go seek out greener pastures to get some cows and their delicious milk which your race uses for energy. You crash land on the verdant, sprawling world of Mars, where your ship’s taken a good amount of damage. You’ll be trekking through deep underground caverns and lush forests to bring the cows on back home. I will say, despite the absolutely surreal plot and location, the worldbuilding is surprisingly fleshed out. The world itself has multiple unique and diverse biomes, and just about every organism having some length of detail that you can have Hamilton tell you about. I was honestly a bit excited every time the game moved to a new area, curious of what new strangeness I’d play around in next. Moo Lander wants you to be interested, at surface level, in the alternate version of Mars here, where the cows still roam the pastures. I can definitely appreciate the little nuggets of knowledge. Really, my only complaint, and it’s a minor one, is I wished that Hamilton would drop a bit of knowledge on scans of the areas you’re going to.

That all said, it really is a bit of a shame that the main characters don’t have much going for them. The voice acting is fine, often even great, but it doesn’t feel like they’re really all that interesting. The main character is your typical charismatic ship captain, while his AI partner, Hamilton, is more akin to a robot butler, with a slight hint of snark every now and again. There really wasn’t much to them personality-wise, and with no other characters to see other than these two, I feel like more could’ve been done to work with the two heroes. With such a wacky and wild premise and world to play in, it felt a bit disheartening that the main protagonists lacked that same kind of spice. 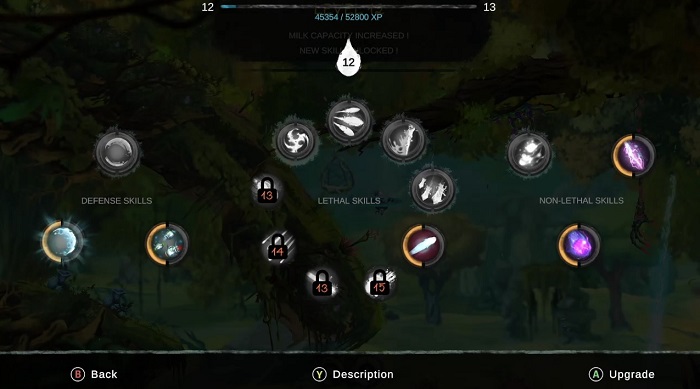 Crypto ain’t got nothing on this bad boy.

What would a space adventure be without some flying saucer action? You’ll be in this little flying saucer that has two degrees of motion, one axis going up and down with another axis going left and right. As you come to exploring the world and repairing your ships, you’ll get two different types of weapons: Lethal and Non-Lethal. Lethal is used for taking out environmental hazards and overworld critters. Non-Lethal are used to take down alien cows (milk’s not too tasty or useful when it’s mingling with blood and gibs). You can get different kinds of weaponry for both Lethal and Non-Lethal, and, using milk you get from capturing cows, you can upgrade your tools of the trade. You also will get ways to protect yourself, from front-facing shields to attack-absorbing drones. Really, the toolset here is well-thought out and lends itself to plenty of different combat styles.

In most cases, this works just as fluently as you’d expect, using your defensive abilities to keep safe while you pelt enemies with milk-powered weapons. The exception to this rule, for myself, was the boss fights with the alien cows. The gist of the boss fights is using your Non-Lethal weapons to subdue the enemy. The big problem with this is that the cows love spamming moves that knock your Non-Lethal attacks away, and with their sporadic attacks, a good majority of the fights make it hard to tell when you’re supposed to be bringing the rain on the bovines. It doesn’t help that early game you’re really limited on offensive and defensive tools, so I usually wound up just finding some way to cheese the boss. To the game’s credit, it does have milk and health stations inside the battle arena, but this just reinforces my tendency to spam the Non-Lethal attacks and dash away when necessary. If I had to make a recommendation, I’d say allow the use of Lethal attacks, but make it to where you lose out on your reward milk the more you damage it with Lethal attacks. After a good chunk of time, you can start catching on to their attack patterns to some degree, but it’s often-times not consistent enough for me to feel like I’m learning the boss patterns, just learning how to not die as fast.

Another odd little quirk of this game is that it treats itself in a similar manner to a Metroidvania, but the influences feel a bit shallow. You do get some upgrades but you never backtrack to any extent to pick up treasures you couldn’t get earlier. Stranger still, there’s a lot of opportunities to chase side-paths that could earn you a little perk or something, but oftentimes I rarely found anything substantial in them. Hell, there isn’t even a map so you can see where you’re going or where you’ve been. The lack of real substantial side-content leaves exploring feeling dry more often than not, which is a real shame. I want to explore this world even further, and there’s a perfect opportunity to entice me, but the game never takes the chance by the horns.

One extra thing to add here that might appeal to some is the addition of couch co-op and competitive gameplay modes, all with different rules, customizable skins, and different arenas with different styles and functions. There’s four modes available:

Honestly, I loved the addition of these modes, and had a fun few rounds of Galactic Mooball with some friends. Nothing about the cows feels clunky, nor does one side feel overpowered over the others. It’s not revolutionary by any means, but it functions absolutely fine and is a great addition to the game, providing something fun to do with friends when you’re done with the campaign. 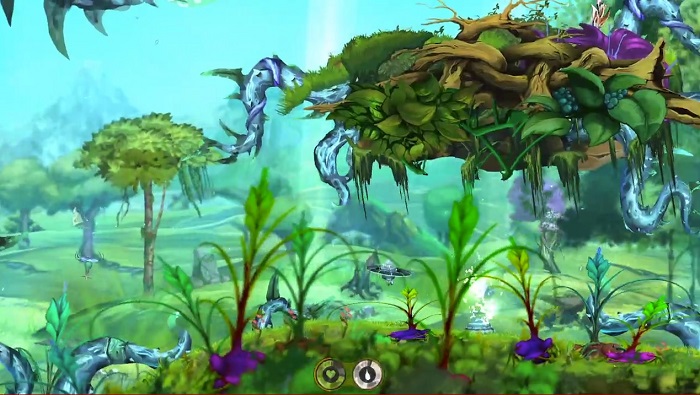 Pretty sure making crop circles here is gonna attract fairies instead of cows.

Now we get to the cow-de-grass: The art and moosic. I was absolutely floored at how gorgeous this game looks. Every biome, every little nook and cranny is plastered with colorful, hand-drawn art. If you take anything from this game, it’s that it pays in spades to put this kind of artful elegance into your environments. Add in a really well composed soundtrack and you have a game worth playing on its aesthetic direction alone. When I came to the Great Plains and had this beautiful, green world set to the backdrop of flowing string instruments and bagpipes I put down the controller for a minute and just soaked up how amazing the vibes were on planet Mars.

The various cow designs always looked interesting too, from the zombie-like Amatox to the Roman inspired Athina, these little bosses were memorable just in their appearances alone. While I do wish there were a few more enemies, I’m pleased with what was there just for one reason alone, and that’s skins.

When you kill enemies, you gather research on them, which eventually unlocks “Camoflage”, where your ship gets a neat little perk and these really cool looking skins! They take the ship’s design and bring something unique with every new skin you unlock. I actively sought out enemies to fight just to collect the different skins for my ship.

You can’t make a premise like this up, folks. You’re a flying saucer abducting alien cows and there’s just something funny and wacky about it all. Yet, I walked away from Moo Lander rather impressed at the level of quality here. While the titular cow battles do need some revamping to bring in the fun factor, I can easily forgive that for the gorgeous art, very competent and solid gameplay, and surprisingly in-depth worldbuilding. If you’re looking for something a little out-of-this-world to spice up your starry night, take a flight to the neatest Metroidvania this side of the Milky Way. 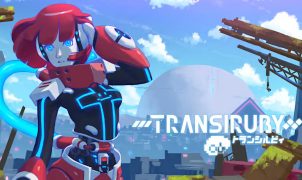