Vampire: The Masquerade – Swansong Review: Filling, But Lacking in Presentation 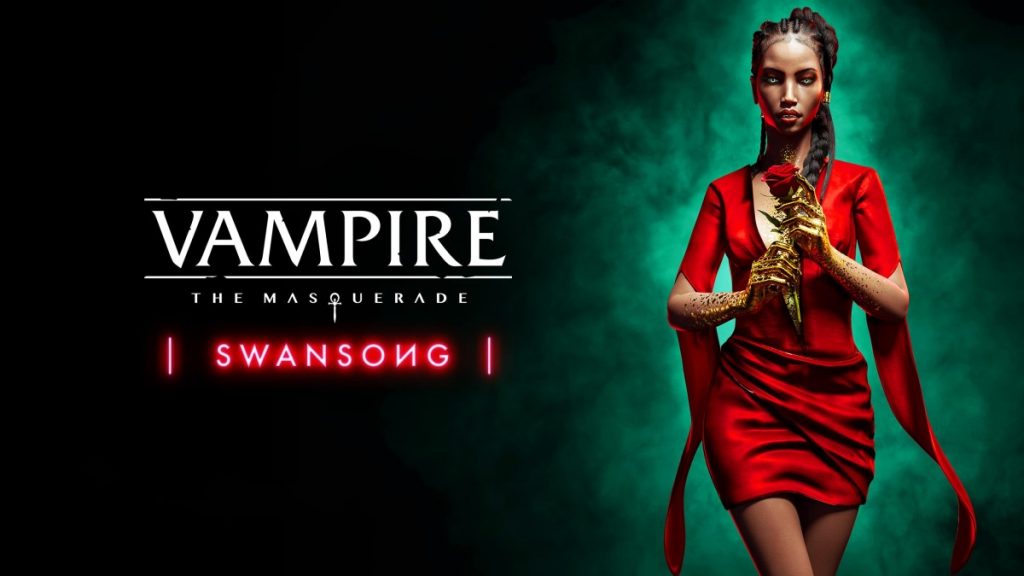 My introduction into the world of Vampire: The Masquerade was somewhat unorthodox. The game itself is a decades-old tabletop RPG, filled to the brim with more lore than I could ever hope to even begin to touch upon in this review. There are also a few older video games that, based upon the little research I’ve done, are talked about fondly and do a good job of immersing the players into the world of Vampire: The Masquerade. Sure, it always helps to know what you’re getting into, but regardless of where you were getting dropped into, it seemed like there was still some point for new players to comfortably springboard off of. My starting point, however, was Vampire: The Masquerade – Swansong, which didn’t do any of that.

Despite being an admitted fledging to the series, Vampire: The Masquerade – Swansong seems like a bit of an oddity. I couldn’t help but feel like it approached lore with the mind of a seasoned vet while simultaneously taking a relatively shallow approach to many of its gameplay elements. The world of vampires is indeed a mysterious one—for better or worse—and, rather ironically, Swansong proved that in some assumedly unintentional ways. But, in the end, it wasn’t actually all that bad, I guess, so I’m glad that I at least stuck with it. 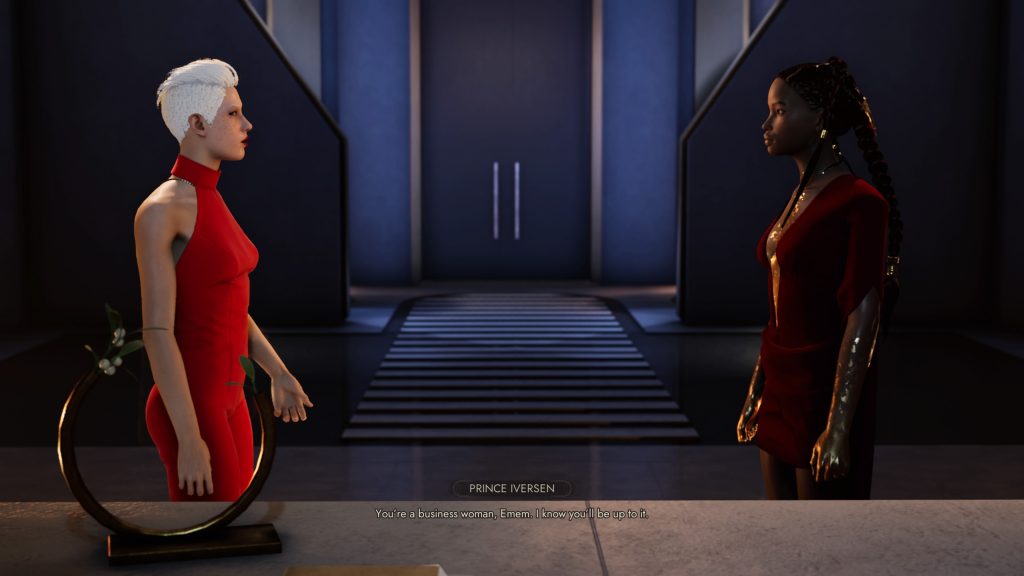 Flattery’s nice… but is it sincere?

Taking place in 2019 in an alternate version of Boston on what was supposed to be a happy day (or at least as close to happy as things can get for these guys). After much discussion between the new Hazel Iversen—the new Prince of the Boston Camarilla—and the Hartford Chantry, a deal had finally been struck, and unification between the two was set to occur. And what do you do when you finally finish a major business deal? You throw a party, of course! And that’s exactly what the Camarilla did, too! Unfortunately, someone decided to crash the party in a really bad way which resulted in just about everyone dying and resulting in a Code Red being initiated. Realizing in just how dire of a situation she and the entirety of her society was, Prince Iversen, summoned three individuals whom she felt she could particularly trust (or, I dunno, maybe they’re just the most useful pawns at her disposal)—Toreador Emem, Ventrue Galeb, and Malkavian Leysha—in order to set things straight… or die trying.

If you know anything about Vampire: The Masquerade, then you were probably able to follow everything that I said fairly well, despite the fact that I didn’t give you any details. If you don’t, well, then I’m sure you were quite lost—and that was exactly how I happened to feel in the beginning of this game. While I understand that this game was supposed to have an introduction that “comes in hot,” the beginning of Swansong felt less like a proper introduction to a video game and more like I loaded up the save file of a game that had already been beaten. This game essentially demands that you not only know everything about Vampire: The Masquerade before going into it, but everything about its characters as well. And, no, that’s not a joke—its inability to “show don’t tell” in the beginning was so bad that I actually had to stop playing to see if Swansong was some kind of direct sequel (it’s not). 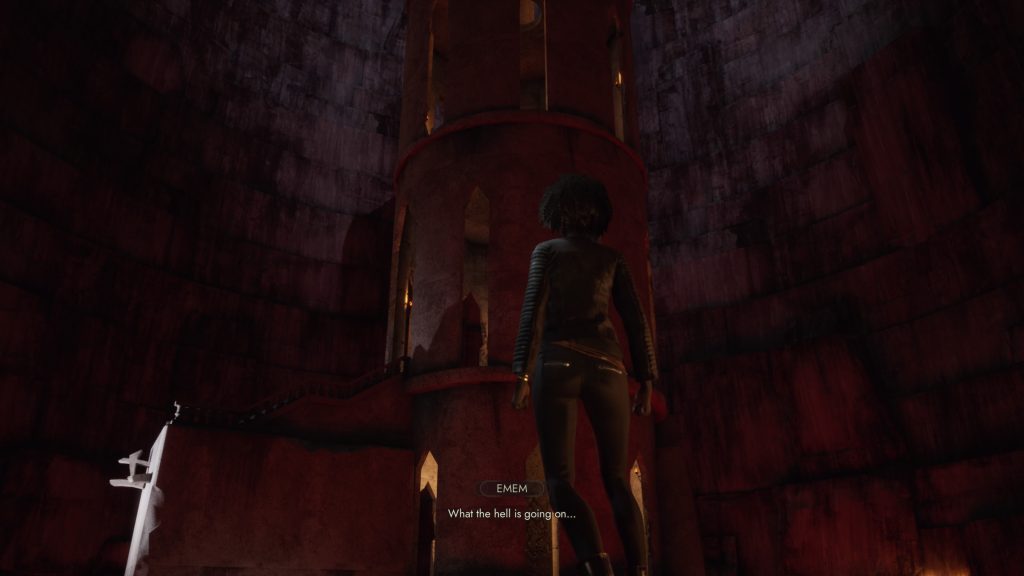 What I failed to realize was that Swansong did, in fact, have all of the information that I felt that I was lacking. Everything from basic Vampire: The Masquerade terminology to extensive (and I mean really extensive) character biographies is all accessible to you—in text format. If you want to actually know what’s going on, you have to pause the game and spend a good hour or so reading a bunch of text that—and I don’t find myself saying this very often—was a bit too small for my liking. To its credit, everything that’s there is good. Really good, actually. As someone who enjoys reading, I actually found myself quite content with going over the enormous digital compendium that the game presented to me—but the fact that more of it isn’t included into the actual narrative of the game (especially toward the beginning) is really weird.

Fortunately, the game does get better as it goes on. If you’re willing to read through everything at the beginning (or just be content with literally knowing nothing about any of the playable characters), the story does pick up. As someone who both went into this knowing nothing about Vampire: The Masquerade and someone who felt like they were drowning in lore in the beginning, I’ve got to say that, for the most part, I came out on the other side relatively satisfied with how things played out narrative-wise.

So Many Roles, So Little Time 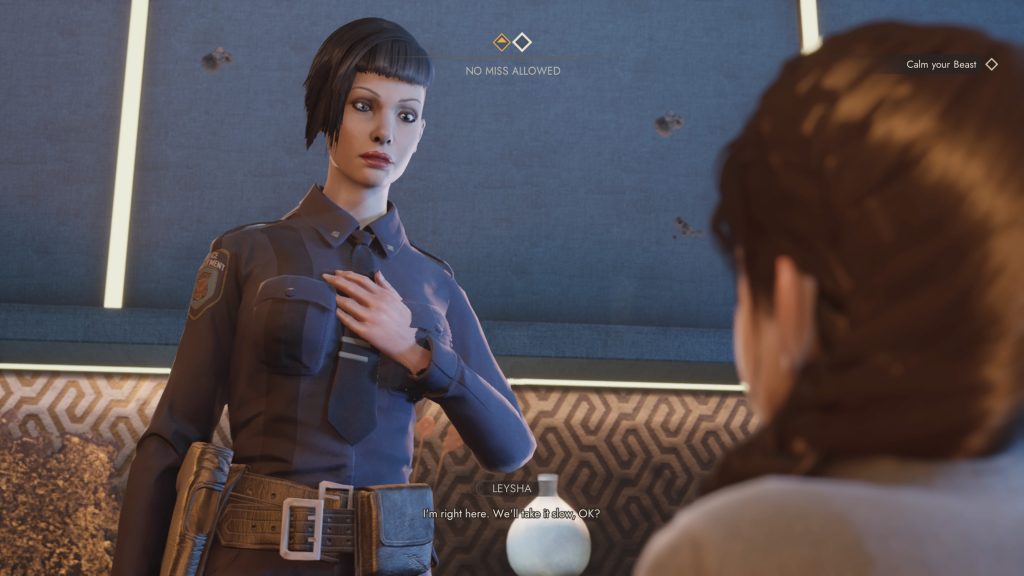 Based on what I’ve been able to find, most of the video games based on Vampire: The Masquerade out there label themselves as RPGs. That makes sense, given the source material. And, wouldn’t you know it, Vampire: The Masquerade – Swansong labels itself as an RPG, too—but it’s certainly not like any RPG I’m used to playing. Now, technically speaking, it does fulfill the requirements of a role-playing game, especially given that Vampire: The Masquerade, as a tabletop RPG, can be molded by its players (or maybe just the DM in some cases) into whatever they feel like. And, while I feel like a game about vampires should probably have some combat elements to it (and I know I’m not alone on that), I guess these devs didn’t because this is basically a narrative-driven adventure game with minor RPG elements in it—even feeding on people is just a button press and a cutscene.

Throughout Swansong, players will be able to take control of its three protagonists, Emem, Galeb, and Leysha, as they work together—and sometimes against one another—to try to find out what’s going on. However, despite the high amount of violence being committed around you at all times, your characters are generally stuck playing detective within each of their respective levels. I do have to give the game credit here, though—while I can’t say I’m thrilled about its weird film-noir approach, I do appreciate how they pulled it off. The areas are fun to explore and genuinely very pretty (I absolutely love this game’s approach to modern architecture). It always feels like things play out just a little bit differently each time you play through a level (unless you have everything memorized, I guess). Conversing with people—which is a significant part of the gameplay—is also usually pretty fun and exciting, although specific individuals can yammer on for a bit too long. There does seem to be a weird discrepancy with the overall quality of voice actors—the protagonists are great while some of the minor characters are almost laughably cheesy in their delivery—which is pretty weird, but, uh, I guess you can’t win ’em all? 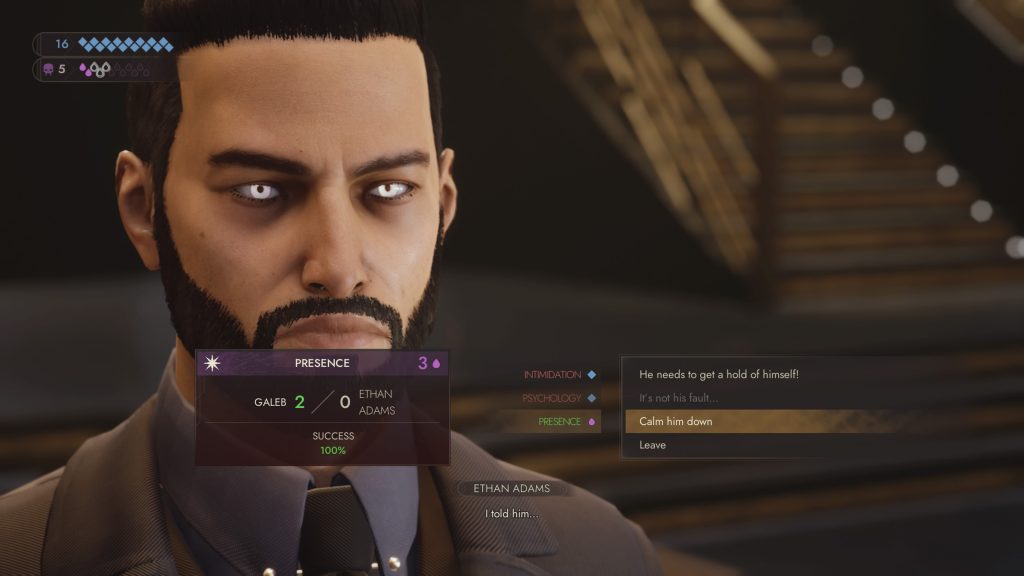 Whatever works, I guess…?

It isn’t just the fact that you’re literally filling the roles of three different characters that make Swansong an RPG. Oh, no, this game’s also got skill and EXP systems! So, as I mentioned earlier, this game’s all about hunting around for clues and information that can help you find the answers you’re looking for—but a lot of those clues are actually innately inaccessible. You may find a fancy briefcase lying around only to realize that it’s locked and you have no idea where the key is. Or perhaps you know the person you’re talking to is guilty of something, but they’re just not fessing up. Usually, you’d be SOL in these situations—but if you invested in the right skills… well, then, you might be onto something!

On paper (no pun intended), this is a neat system. I like the idea of using RPG mechanics in a nonconventional way, and I think that an entirely social RPG like this is really cool. But, in practice, there are some fundamental flaws with Swansong. Regardless of how I invest my EXP, I always feel like I’m missing out. And, yes, I know that’s intended somewhat—but I feel like I’m missing out on just about everything. And this is where the problem with this being a video game lies. Were this the tabletop version, the DM could say, “oh, you dumped all your skill points into technology like a weirdo,” and come up with a sensible scenario that would fit the player character’s build a little bit more favorably. Of course, that shouldn’t happen all the time—it wouldn’t be any fun otherwise—but it can become so tricky to accrue EXP that it feels like you’re playing catch-up for most of the game if you don’t stat out your characters properly from the very beginning.

Vampire: The Masquerade – Swansong does wonderfully with creating an engaging atmosphere and has some legitimately creative ideas, but its overall execution still leaves much to be desired. I can appreciate an entirely combat-free RPG, but I think that you’re going to have to do more than occasionally let players unlock certain dialogue choices or bypass locks by leveling up specific skills. I’m not too worried, though. This series has been going on for a long time, and while this game may have Swansong in its title, I doubt it’s the last Vampire: The Masquerade game we’ll be seeing. And, hopefully, the next one will have just a little bit more polish.

Full disclosure: This review is based on a copy of Vampire: The Masquerade – Swansong given to Hey Poor Player by the publisher. 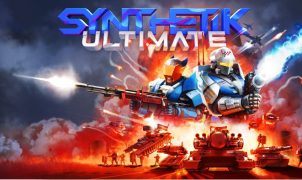