RiffTrax: The Game Review: it’s just a show, you should really just relax! 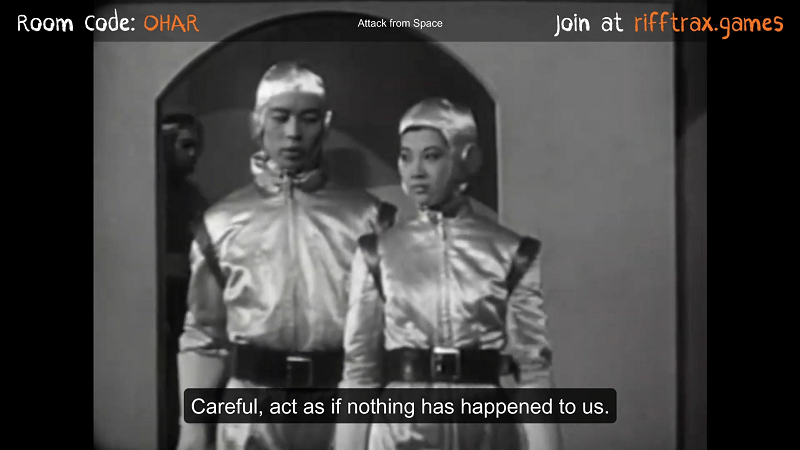 Not only was Mystery Science Theater 3000 a big part of my childhood growing up, but so was riffing bad movies with friends. We’d go out of our way to find some of the campiest, most notoriously cheesy movies with terrible writing and even more terrible acting, such as Troll 2 and The Gingerdead Man. If it was a bunch of us over just hanging out, we might turn the volume down a bit to be able to hear both the TV and each other, but if it was a more one-on-one session, we’d often turn the volume down all the way and just improvise the entire movie, often laughing like idiots within a few short minutes. As far as we were concerned, bad films turned into good movies while in great company, finding the ultimate terrible title being a point of pride amongst us.

With an opening like that, you know I had to get my hands on RiffTrax: The Game. Developed and self-published by Wide Right Interactive, RiffTrax: The Game brings the fun of Mystery Science Theater 3000 and RiffTrax to fans and newcomers alike in party game form, and it’s just as fun as you’d expect. Available on console and PC, RiffTrax: The Game allows up to 6 active players to participate in a battle of riffs and up to 12 spectators to watch these short flicks unfold into madness. And in the event you don’t have a player 2 (or 3, or 4, or 5…), there’s even a solo mode for those who don’t think it’s dangerous to go alone. How’s that for an innovative party game? 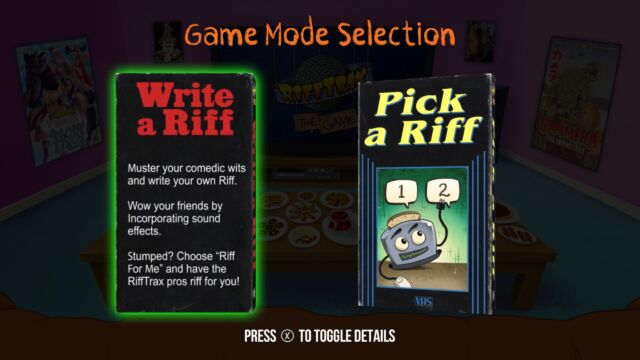 For the unimitated, RiffTrax: The Game is the video game version of RiffTrax, a series that takes the terrible films of yesteryear and adlibs their own jokes over the audio. It could be a snarky comment after a character says something, an observation on an odd setting, or made up dialogue under the pretense that one of the characters is saying that.  If you’re familiar with Mystery Science Theater 3000, it’s basically that (same idea, same cast, etc.) except the row of seats and their three occupants are missing from the video (as well as those fun skits like the invention exchange and all). Really, if you haven’t seen them yet but this sort of thing interests you, I highly recommend you go check out the Rifftrax YouTube channel — in the very least, doing so will give you a sense of what to expect in terms of gameplay.

Now that you’re back from their YouTube (I assume you’ve watched every available video — I did), it’s high time we get into the game. RiffTrax: The Game has two separate modes that are ultimately extremely similar: Pick a Riff, where players will pick from a list of narrated riffs, and Write a Riff, where players will write their own. Both of these modes start similarly, where a clip from a previously riffed Rifftrax movie sets up the scene, followed by a place to insert a player-chosen riff. Whether by choosing from a slew of witty and applicable lines or by creating their own, players will complete the scene and compete to make their friends laugh until they ache. If there’s one riff that made you laugh the hardest, vote for them — whoever’s the funniest wins! 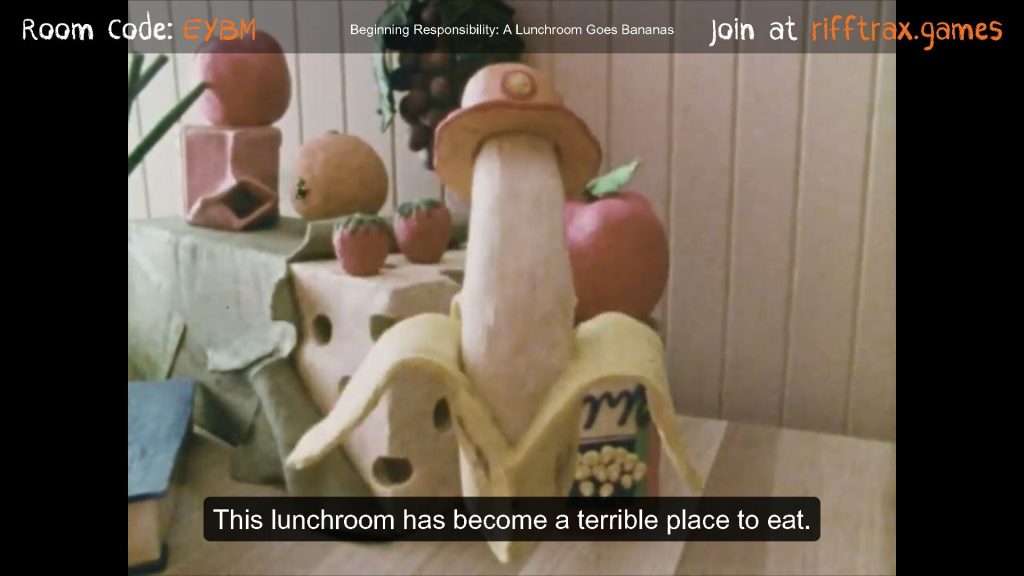 For those wondering if there’s much of a difference between What the Dub or Jackbox’s Quiplash, the truth is, they are quite similar mechanically (especially to the former — almost like a licensed What the Dub). But for Rifftrax or MST3K fans, a lot of the appeal is in the quotes read in the voices of Mike Nelson, Bill Corbett, and Kevin Murphy. For example, in Pick a Riff, players will choose lines previously read by the cast, which is fun to hear them narrated on screen; additionally, when the Riff Bot is involved, the riffs it submits are the actual quotes from that scene, giving players a run for their money when it comes to being funnier than the legends themselves. If you weren’t a fan of either series before playing RiffTrax: The Game, you’re sure to be quoting them for days after a few rounds with friends.

What I found the most innovative, however, was the ability to play alone. RiffTrax: The Game is certainly best experienced with as many people as possible — 6 players and 12 spectators for 18 in all (not to mention Twitch streaming) — but if you want to play solo after everyone else has turned in for the night, that’s fine too! The voting section will be removed and there will be no winners (or losers), but you’ll be able to hone your wit in your friends’ absence. In the very least, you’ll find plenty of really, really odd movies that you’ll immediately start looking up on the RiffTrax YouTube channel (especially those shorts!).

RiffTrax: The Game is a must have for fans of RiffTrax and Mystery Science Theater 3000, but it also belongs in the library of anyone who loves laugh out loud party games like What the Dub and Quiplash. Even if those titles don’t immediately tickle your funny bone upon reading them, it’s hard to argue with the price, considering how many people can play for hours on end. If you can’t help but watch a good bad movie with your mouth, RiffTrax: The Game is absolutely for you.

Editor’s note: This review is based on a digital copy of Rifftrax: The Game provided by the publisher. 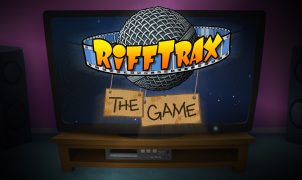 RiffTrax: The Game Asks You And Your Friends To Make Fun Of Awful Films