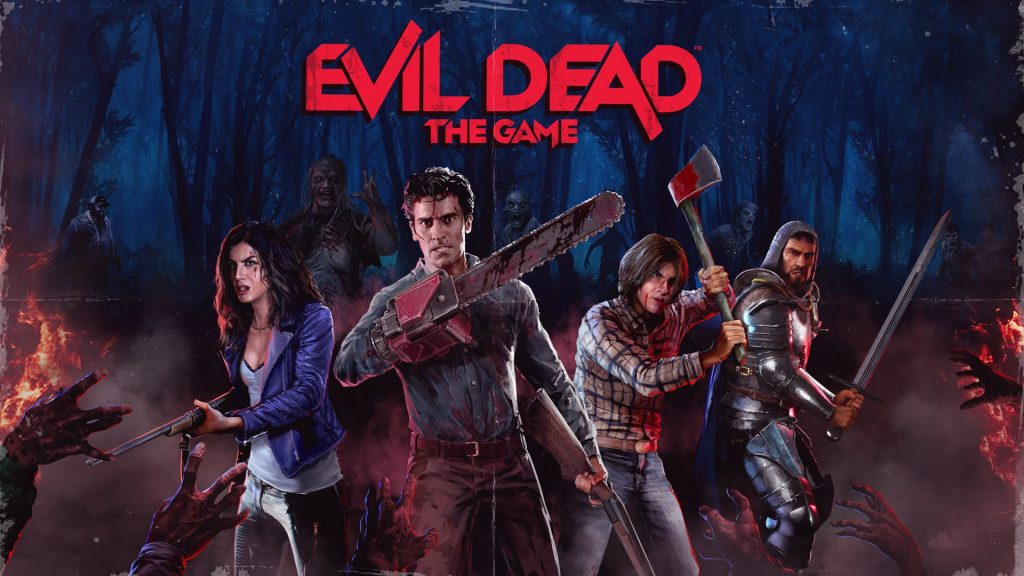 With that in mind, does Evil Dead: The Game manage to live up to the lofty heights of the movies and subsequent TV series, or does it fall apart like a lifeless corpse having just been decimated by Ash’s chainsaw? Let’s dissect (pun totally intended). 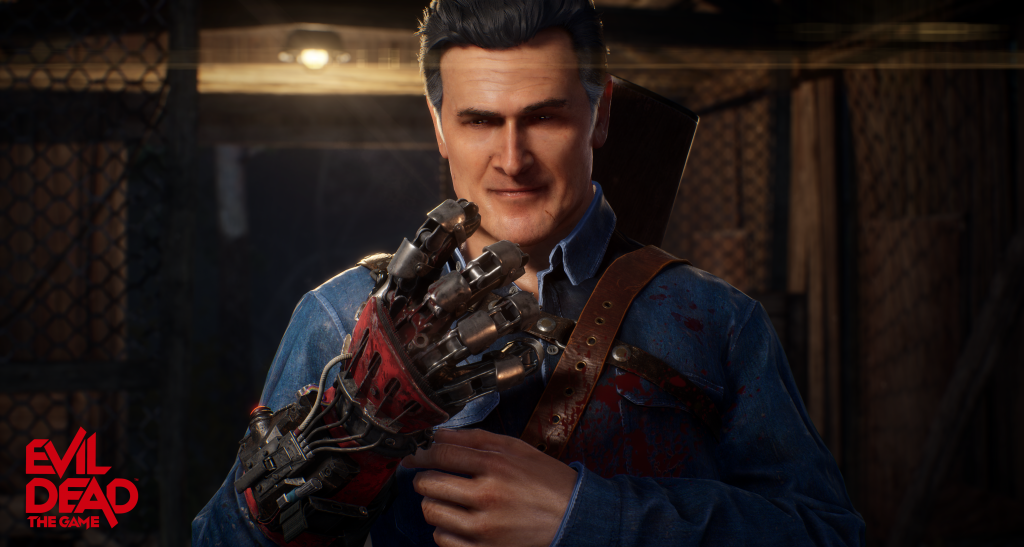 So, I’ll cut right to the chase; if you’re a fan of Evil Dead and multiplayer gaming, then Evil Dead: The Game will be a literal dream come true for you. With a massive cast of characters spanning each movie and the TV series, as well as three demon armies to take control of when playing as the Kandarian Demon, the level of fan service here is unparalleled. Whether you’re playing as Ash, Cheryl, or possessing Evil Ash as the Kandarian Demon, every character and monstrosity has been painstakingly recreated to accurately replicate their big and small screen counterparts.

It’s a project that was clearly a labor of love for developers Saber Interactive and screams of a game that was made by fans of the source material, for fans of the source material. Every moment in-game absolutely drips with authenticity, and whether you’re revving up Ash’s chainsaw as he makes his trademark cheesy quips or raising skeletal minions from the ground as the Kandarian Demon, it’s an experience that firmly embeds you in the crazy universe of the Evil Dead. Thankfully, it doesn’t play half bad as well. 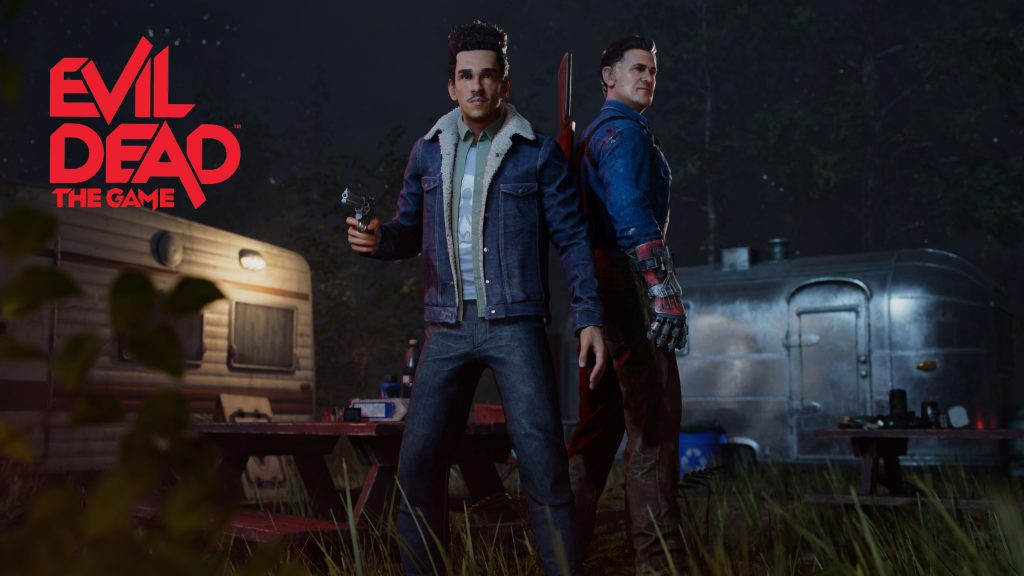 If you’ve played something like Dead by Daylight or the relatively recent adaptation of Friday the 13th, you already have a good idea as to how Evil Dead: The Game’s asymmetrical hijinks play out. Playing as the survivors, teams of four need to work together across fairly large maps, completing various objectives along the way, hopefully on their way to victory.

Victory in Evil Dead: The Game comes by eventually sealing away the Necronomicon in a final showdown against the Kandarian Demon, but there is a lot to get through before reaching that ultimate encounter. Players must first secure three map pieces, each set out at a different location on the map, before then making their way to various ritual sites where they need to secure the Kandarian Dagger and the lost Necronomicon pages.

Whilst the collecting of the map pieces is usually pretty uneventful, things really get spicy once the locations of the dagger and pages are revealed on the map. With these locations also visible to the Kandarian Demon, the action suddenly becomes concentrated on these small areas, where players must hold out for a set amount of time before either the dagger or pages are secured whilst being bombarded by enemies. Following that, you’ll have to then engage in another set-piece which sees you banishing a group of powerful entities from the world, again whilst being absolutely hammered by enemies, all before the final stand-off during which you must defend the Necronomicon as it’s sealed away. 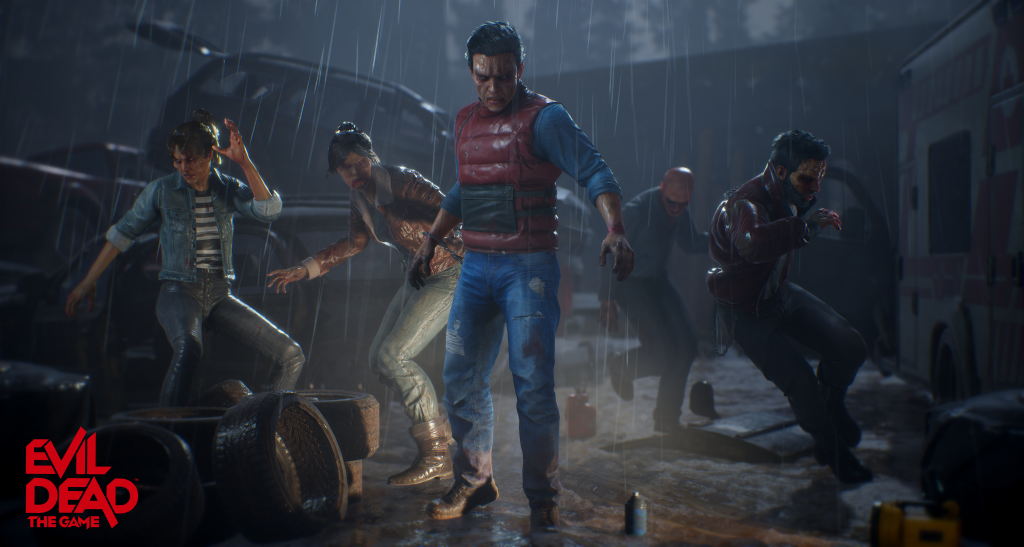 Thankfully the survivors are well equipped for the job, each of the 13 falling within a specific class and coming equipped with their own abilities. Cheryl, for instance, can put down healing auras, and also passively heal the team any time she uses a health consumable, whereas other characters are more focused on providing additional damage or defense, such as Henry the Red, who can withstand tons of damage and equip extra shields.

This diversity amongst the characters is welcome and perfectly compliments the already satisfying combat. Maps have a variety of both melee and ranged weapons dotted around the place, which, outside of a couple of limitations such as Ash being the only one capable of wielding a chainsaw, can be equipped by any character. Crossbows, rifles, shovels, and of course, the trusty boomstick all make an appearance and handle with a satisfying weight that makes dispatching of the demonic hordes a truly visceral, gore-filled pleasure.

The only notable issue I can call out with the combat is the baffling decision to apply a rarity scale to the weapons dotted around the map. Taking the approach of countless ARPGs and looter shooters, loot comes in color-coded tiers, ranging from common to legendary, with legendary loot being frustratingly hard to come by. Within the context of this world, it makes absolutely no sense for loot to be tiered in this way and feels like an arbitrary way to slow down the player power creep in any given match. It can make getting well equipped for the late stages of a match an exercise in frustration, and should you enter those latter battles with a mere common weapon (which can happen quite often), well, prepare to truly run into the wall of balance issues that currently exist between the survivors and the Kandarian Demon. 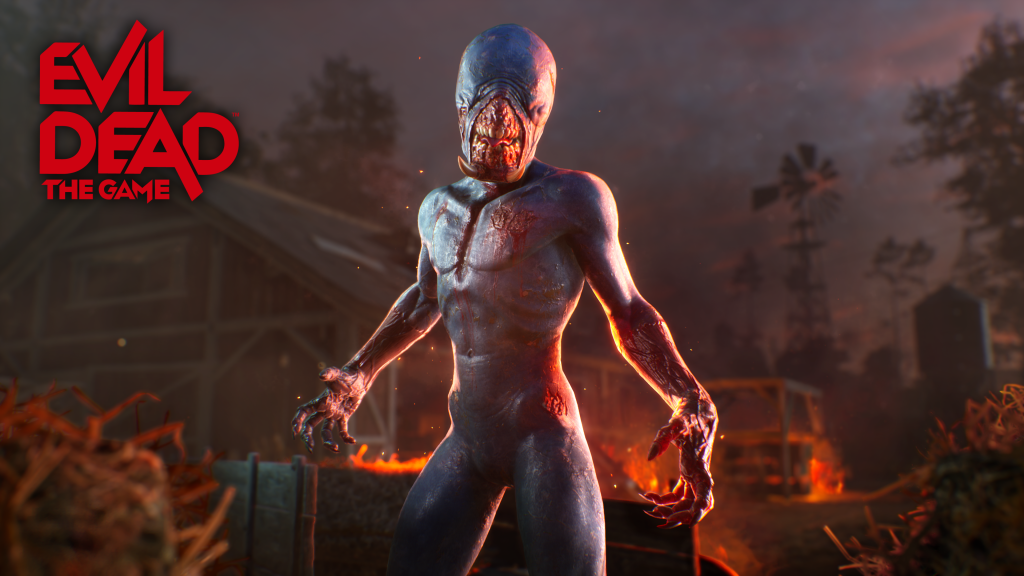 Before I address those issues, I just want to be clear; playing as the Kandarian Demon is an absolute blast, and easily my favorite way to engage with Evil Dead: The Game. Darting around the map in first person as the survivors go about trying to clear objectives, playing as the demon sees you hoovering up infernal energy, which can then be spent on deploying minions, boss characters, possessing objects and minions (and later survivors themselves), and laying traps to torment the opposition.

As you do all this, the demon grows in power, leveling up in threat level, which in turn allows for upgrade points to be spent on things such as giving your minions more health, becoming more efficient at possession, and reducing cooldowns on how often you can spawn elite enemies and bosses. It’s a total hoot as you cause chaos and try to derail the survivors, causing their fear meters to increase. As their fear increases, they become more visible on the map and eventually become open to possession themselves, at which point you can take control of them and turn them on their allies for a short time.

And that’s all great, honestly. The amount of thought that has been put into making the Kandarian Demon just as, if not more fun to play than the survivors, is unbelievable. Watching your diabolical plans unfold on-screen successfully delivers satisfaction, unlike anything I’ve experienced in any other asymmetrical multiplayer title. However, fun as it is, you can’t help but feel that it’s all a bit unfair given the current state of play when it comes to balance. 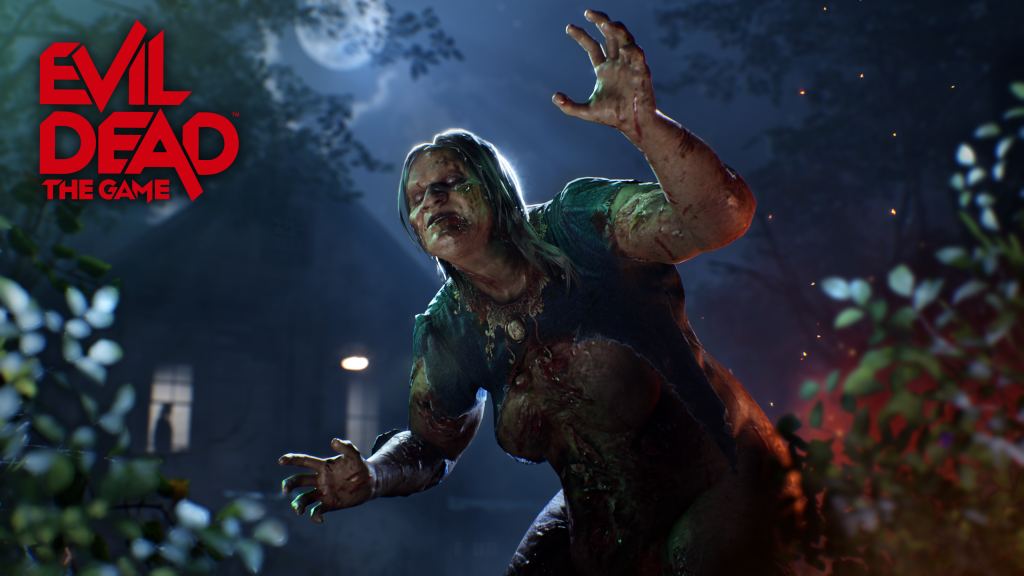 See, whilst the survivors rummage around the map, desperately hunting for something more efficient than the pea shooter of a handgun they stumbled across at the outset, the Kandarian Demon doesn’t face the same struggle to power up. As long as you’re laying traps, spawning minions, and picking up infernal energy, that threat level will just continue to grow and grow.

Taking the Warlord class, which has absolutely become the meta pick for demon players, it’s entirely possible to have increased the durability of your skeleton minions and boss spawns to the extent that by the time the survivors are ready to make their play for the daggers and lost pages, victory is all but guaranteed. Add this to the Warlord’s ability to resurrect dead allies, and the pace with which the fear meters can fill to make the survivors easy possession fodder, victory is often all but guaranteed within the first ten minutes of a match.

Despite all that, as much as I would love to see competitive matches become more commonplace, I honestly don’t really care that the entire experience is unbalanced all that much. Even being on the end of a crushing one-sided defeat, the core combat and gameplay loops of Evil Dead: The Game are so much fun that even a complete landslide loss doesn’t feel like wasted time. And that really speaks volumes to the cracking job that Saber Interactive has done in bringing this universe to life.

In For The Long Haul 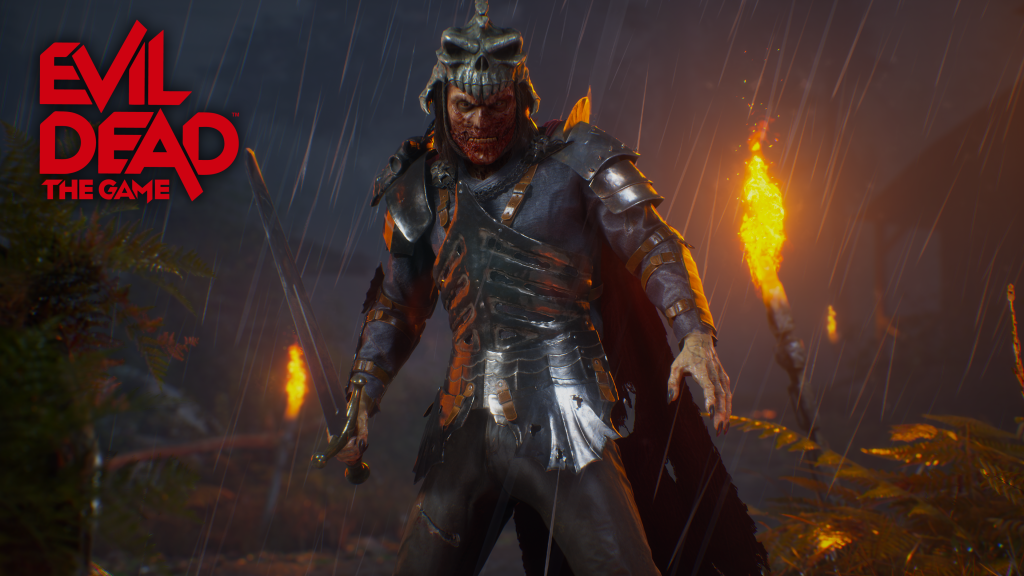 Also alleviating the frustrations of a devastating loss are the meta-progression systems, which will be the real hook for people intending to stick around long-term.

No matter whether you win or lose, you’ll be rewarded after each match with experience that will result in skill points upon leveling up. These can then be spent on a mammoth set of skill trees, allowing for permanent buffs to things like damage, healing capabilities, and overall defense. There’s a huge amount to work through, with each character and each demon variant having their own skill tree, and anybody who wants to consider even maxing out one skill tree is going to have to dedicate a serious amount of time to Evil Dead: The Game.

I’m sure that there will be plenty of complaints about the grind to level up being too slow, and I’d be inclined to agree. Even after a week or so of putting in a solid number of hours each night, I’m still nowhere near close to unlocking the best skills for my mains, Cheryl and the Warlord. With regards to the demon skill trees, this isn’t so much of a problem, but with survivors already being at the wrong end of the balance equation, having the game-changing skills and buffs locked behind such a grind may put some people off.

That being said, there is no denying that it adds to the longevity of the package. Between the single-player missions that show you the ropes of the game whilst taking you through iconic moments in Evil Dead history, and the draw of the skill tree grind for the huge character and demon roster, this is hands down the most content complete asymmetrical multiplayer game I’ve seen at launch.

Evil Dead: The Game is an experience that oozes with an appreciation of the source material from every pore, whilst also providing a gameplay experience that delivers fun and frights in spades. For players looking to dig deep into character progression and team compositions, there’s an absolute wealth of content available to progress through and experiment with. Whilst the teething issues when it comes to balance cannot be ignored, even these struggle to prevent me from hopping back in given how much fun can still be had, despite the need for Saber Interactive to create a more even playing field. If you love asymmetrical multiplayer or the Evil Dead, then grab those boomsticks, you won’t be disappointed.